November 21, 2017 update: According to this announcement, the Closed Beta will start on December 4, 2017. The initial Beta will only include Constructed with Ixalan cards. Participants will be asked to sign a Non-Disclosure Agreement.

October 26, 2017 update: Details on the Magic: The Gathering Arena closed beta have been released. In an article today, Chris Cao discusses the initial roll out and stress tests.

The first stress test will take place on November 3. If the test is successful there will be a series of play days over the subsequent weeks. The initial card pool will be every card in Ixalan with a focus on testing Constructed. The goal is to have the Closed Beta kick off on November 30.

Additional details, including how to sign up for the Closed Beta can be found in today's article.

Today we got our first look at the much anticipated >Magic: The Gathering Arena. The new game, part of the Magic Digital Next umbrella, and coming out of the new Digital Games Studio. We also got information on the future of Magic Online.

First up, Magic: The Gathering Arena will be a new way to play Magic digitally. The game is built on a separate rules engine from Magic Online that incorporates machine learning. According to the article explaining the new product, Arena will focus on the new Standard releases (the Closed Beta will have Ixalan first, before incorporating Standard). Eventually Ranked Constructed matches as well as a Limited format will come to the platform. The program is also starting as PC only and so be free to download and play.

Arena was designed with streaming in mind. As Vice-President of Digital Jeffrey Steeflel said in his article, âWe want to create a version of Magic thatâs as much fun to watch as it is to play.â The goal is to be one of the most viewed games on Twitch, a platform where Magic Online has lagged behind other games such as Hearthstone. There is also a stated goal (in the FAQ) of making Arena have a âgreater connection to tabletop Magic that any previous digital gameâ. There is also a reference to some level of competitive esport involving Arena, but nothing replacing the current pro structure. 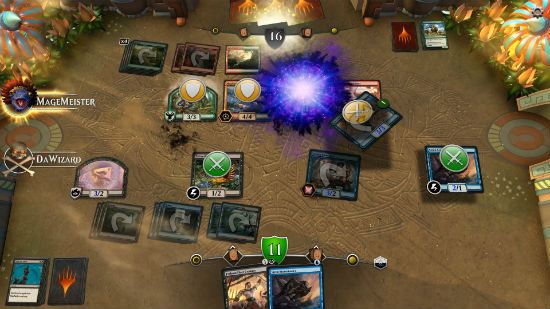 In a separate article from Chris Kiritz, it was explained that Arena will not be replacing Magic Online. Instead the two platforms will exist simultaneously, with Arena focusing on the newest sets and Magic Online focusing on a more diverse play experience (including Modern, Legacy, Vintage, Pauper, Cube Drafts, and novelty formats). Magic Online will retain Pro Tour Qualifiers and the Magic Online Championship Series.

Many questions remained unanswered. When will Arena be available on platforms besides PC (including tablet and mobile devices)? Can Wizards support two programs at a high level? Will Magic Online ever sunset and what does that mean for players with massive collections? Will the two digital platforms have any relationship to each other or will they be siloed entirely?

All that will come in time. For now you can sign up for the Arena Closed Beta here.