Well, all the cards are out now for Aether Revolt and itâs time to do my set review! I know you can read other peopleâs set review, but I pride myself in seeing things in cards that others donât always see. I also happen to do very well in the first big tournament after a new set comes out. Iâm fluffing my feathers a bit here but I just want you to know why you should read my set reviews in addition to other peoples. Youâll gain different insights and knowledge which in turn will make you a better player. I tend to brew a lot of decks with all sorts of cards so seeing my rankings and reviews will only help. Knowledge is power, so buckle in!

My Set Review is strictly limited to Standard. Keep that in mind while reading. Iâm not rating for draft, sealed, or any eternal format. Okay, now that thatâs out of the way, letâs look at my grading scale.

Each card will be given a rating of 1-5.

4 â Format Staple, sees play in multiple decks, one of the best cards in the format. (Aether Hub)

5 â Format warping. Every deck plays this, or is built with this card in mind. (Gideon, Ally of Zendikar) 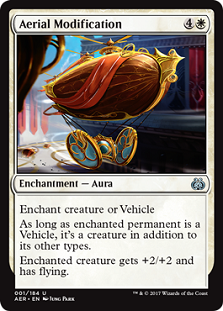 Could see fringe play with something like Consulate Dreadnought or some other cheap vehicle that takes a lot to crew but is just huge on its own or has some very strong ability. 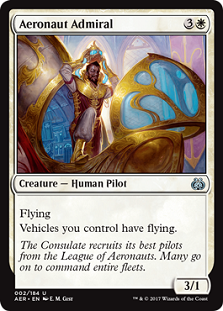 The vehicles in this format all already have flying. Smuggler's Copter, Heart of Kiran, and Skysovereign, Consul Flagship. This is not likely to see play in Standard. 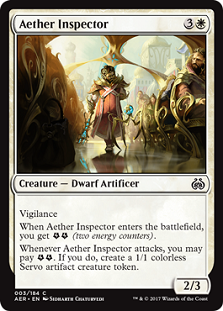 So much mana for such a small effect that takes a lot of time to get going. Much better 4-drops than this one, even if you're an energy deck, you'd rather just play Gideon, Ally of Zendikar and make 2/2s. 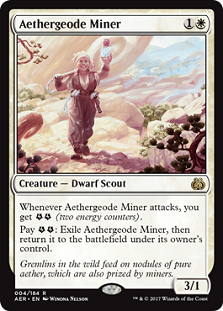 2 mana 3/1 is a very good starting point for any aggressive creature. Tack that onto it hard to remove and it becomes even better, think Scrapheap Scrounger. Not only is it great at attacking, it's also great at blocking since you can block and then flicker it. On top of all that, it continuously triggers Revolt. A fantastic card. 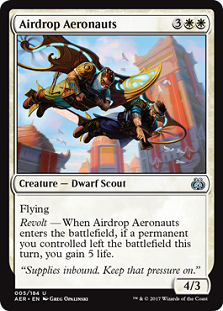 Do you want to gain five life at sorcery speed or get a 4/4 flying angel that gives all your other creatures indestructible at instant speed? These guys were air dropped on their head when they were babies. 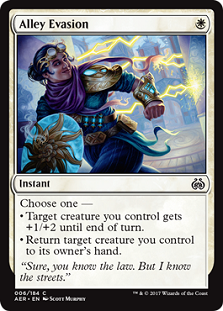 This reminds me of Cloudshift. Sure, they are very different cards, but both can be used as combat tricks or to generate some sort of value by replaying a creature. My first thought was, "Maybe it's a good sideboard card for the White Aggro mirrors?" It could be, it does let your Smuggler's Copter kill your opponent's. Sure, so does Fragmentize but this can also do other things against non-artifacts. Wouldn't be shocked to see a couple in a White aggressive deck. 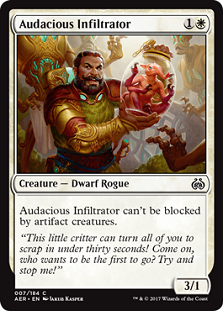 Only see this possibly seeing play in some sort of Dwarf tribal deck, but even then, you have so many better options. Unless Servo tokens become a thing and Liliana, the Last Hope is played less, I don't see this Dwarf seeing play. 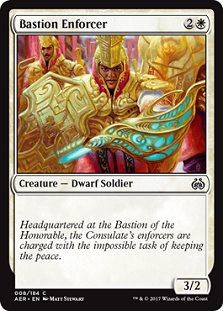 We need a lot more than a 3/2 body for 3 mana in Constructed. The only thing this card will be enforcing is the bulk common bin. 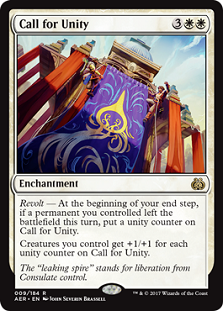 Reminds me of a bad Assemble the Legion. Itâs still Assemble the Legion and can easily take over the game if left unchecked for a long period of time. Unlike Assemble the Legion you'll have to trigger Revolt a couple of times to get real value out of it, but even having just two unity counters on this thing is going to be insane, especially in a token style deck. Maybe some G/W tokens with Nissa, Voice of Zendikar, Gideon, and Sram's Expertise?

Caught in the Brights â 1.5 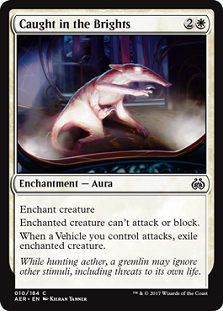 Better ways to remove creatures for 3 mana than this enchantment. Speaking of 3 mana enchantment removal, where's my Oblivion Ring? Also, poor Gremlins man.... First, we poison them out with Fumigate and now we are running over them and making them roadkill? We need to send these Gremlins to New Phyrexia so they can have all the food they'd ever want. 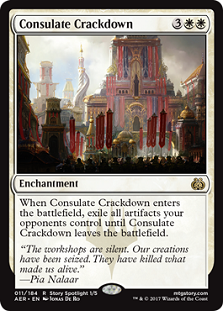 If this also stopped players from casting artifacts it would be a house in eternal formats. Sadly, it doesn't so I believe the best home for this card would be in some sort of Commander deck. Maybe alongside Mycosynth Lattice? Don't worry, your play group will love you for it. 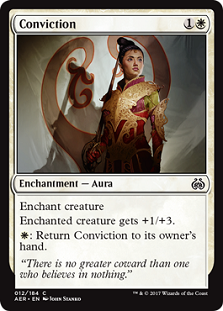 Great way to trigger Revolt. I think this was made with Revolt in mind and for limited purposes. Could see it in some all-in Revolt deck but I'm not convinced. 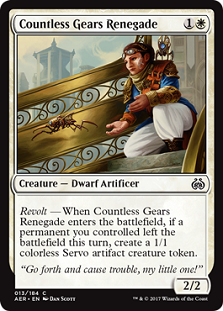 If the Dwarf continuously made 1/1s I could see it. As is you'd have to crack an Evolving Wilds or trade a creature. It's also not great on curve since it's unlikely you have a 1-drop that will trade with your opponent's 1-drop so that this creature will trigger its ability. No thank you kind sir. 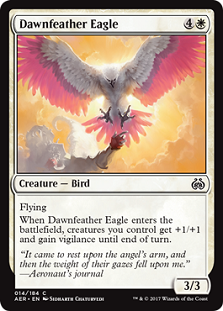 I know I keep wanting to tack things on to cards but this thing could be playable with Flash in Constructed. Since it doesn't have that however, I'd rather play Gideon, Consulate Crackdown, or Always Watching. 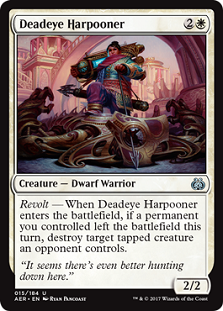 Could see this being decent in Standard if you have a reliable way to trigger Revolt in your deck. It's like a Banisher Priest that you have to work harder for but it can remove the creature for good. 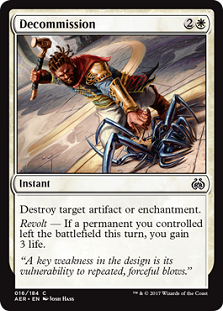 Not quite Disenchant, but this is White's Appetite for the Unnatural. Will see play in Sideboards of White decks. 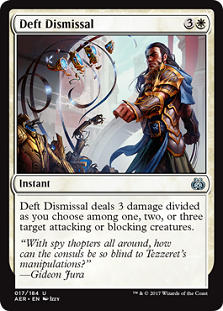 Very medium removal spell. This one is only very good against decks with a lot of X/1 creatures. Those happen to play Selfless Spirit, which makes this a little worse. If you ever get a three for one with this card, you will change the tide of any game quickly. I can see this as a Sideboard card. 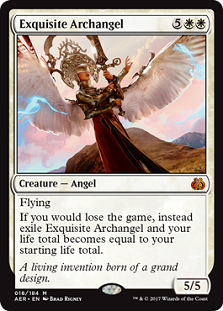 This is personally my favorite White card in the set. Overall, it's a worse Platinum Angel in White but it's still Platinum Angel. This is one fatty I'd like to cheat into play if I was reanimating or something. Maybe a B/W Refurbish deck with this angel, gearhulks, and Ever After? Sounds sweet to meâ.â.â.â 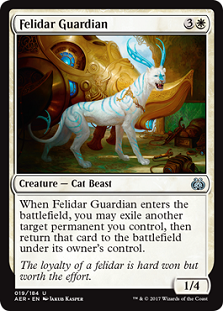 This card is part of a two-card infinite combo, the other half being Saheeli Rai. This would make the deck Jeskai colors and I think it would fit perfectly into a Panharmonicon shell where this Felidar Guardian could use its enter the battlefield ability on other things then just Saheeli. That would also mean Saheeli could use her minus ability on another thing if you don't have the Felidar Guardian already, maybe something like Cloudblazer? This deck also sounds super fun and competitive! 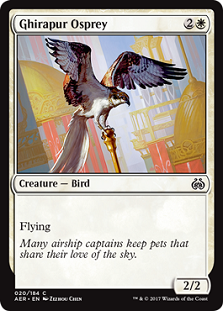 Ca-CAW! This bird deceives you. Don't be fooled by it! It might have one more power than Storm Crow, but it will never be as good as Storm Crow. #BringBackTheStorm 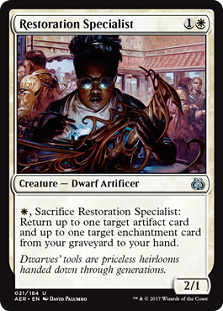 This Dwarf can generate a lot value, especially if you can constantly get two things and possibly even recur the Dwarf herself. We did get the Implement artifact cycle in this set, so you just need to find a good enchantment that can be put into your graveyard and you're good to go. Maybe this can give Caught in the Brights some purpose? 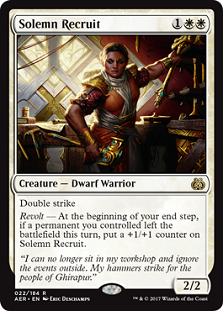 Another solid Dwarf creature in White. Mirran Crusader saw a good amount of play in Standard. Sure she might not have protection from Black or Green, but she can grow! Having the ability to grow by just playing the game means that it is much easier to play this card in your main deck than Mirran Crusader. Plays fantastically well with Aethergeode Miner. 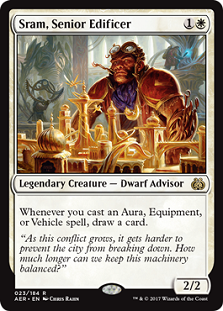 Did I say that dwarves are good this set? Dwarves are good this set. If you didn't think Smuggler's Copter or Heart of Kiran were good enough, what if they drew you a card now too? This isn't even once per turn! So, you can play it in the Aetherflux Reservoir combo deck and not only gain life off your Reservoir but also draw a bunch of cards! Now Bone Saw and Cathar's Shield will cantrip while getting you ever closer to your combo. Amazing creature. 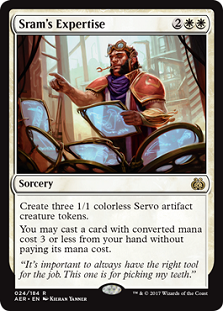 The whole Expertise cycle is fantastic. I don't think they're "too good" either. These cards are all fixed Cascade. You don't cast free spells out of your deck, instead you cast them out of your hand. This means the first Expertise is likely to be extremely powerful but the more you play, the weaker they will get. Especially if you clump a bunch of them all together. You might have a turn where you cast a bunch of cards in one turn but after that, you're done. These cards are all pushed and I know people are saying, "has wizards not learned their lesson with free spells?" Yea, they have. Wizards knows that free spells are powerful but free spells and powerful cards are also extremely fun to play with. They just must get the right balance of fun and powerful, but not oppressive. I think they did it with this cycle.

Sramâs Expertise is a powerful card. Anything that makes that many tokens and then does something else is going to be fun to cast and scary for your opponent. Cards like Spectral Procession, Lingering Souls, Raise the Alarm, Dragon Fodder, and Cloudgoat Ranger were Standard staples. This one will be one too. 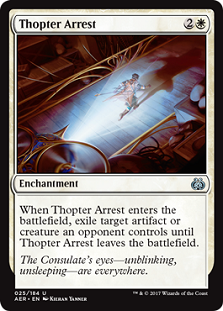 Really wish they just gave us Oblivion Ring for annoying Planeswalkers like Gideon. This card is a weaker Oblivion Ring but it will still see play. The same way Murder is weaker than Hero's Downfall but you still play it because you need removal. It's also very like Decommission, so they will compete a little for the same sideboard slot.

We can see that White has some powerful cards when none of the top five cards go under a 3 expect for Felidar Guardian which is a close 2.5. The reason Guardian isnât a three is because it will only see play alongside Saheeli, but that deck could prove to be very good, especially if you can build the deck so it isnât all in the combo with Panharmonicon. White didnât disappoint at all in Aether Revolt, weâll see how the other colors stand up to it tomorrow. Tomorrow weâll be covering the Blue cards. Does Blue get significantly better thanks to Aether Revolt? Find out next time on Dragon Ball Z Gathering Magic!