Yesterday we covered all the White cards from Core Set 2021 and White seems to have gotten some solid cards. Today we dive into the Blue cards, let us see what Blue got in its stocking this time around. Before we start that, this is how I will be ranking the cards.

Barrin, Tolarian Archmage - 3.5 - Things that bounce and do something else for 3 mana have been notoriously great in Standard. Reflector Mage and Teferi, Time Raveler come to mind. Barrin can also hit planeswalkers to either reset your Narset and draw you a card or to bounce your opponent's walker for a big tempo play.

Discontinuity - 3 - Time Stop has never looked better. Costing four less on your turn is huge and allows it to act as a counterspell on your turn. It can also make Uro not sacrifice itself if you have 5 mana. Can also be a Fog, even against things like Questing Beast. Extremely versatile card.

Frantic Inventory - 2 - We have had this before at sorcery speed in Standard. It is not good enough unless you have ways to discard the first one as you really don't want to pay 2 mana to just draw a single card. It also takes up four deck slots, which is a lot.

Ghostly Pilferer - 2 - Spirits without flying! I really like this card out of the Sideboard if control mirrors become a thing. It can pressure the opponent's life total / keep planeswalkers in check while drawing you cards.

Lofty Denial - 3 - Solid counterspell for flying tempo decks. Will see a lot of play in those decks.

Miscast - 1.5 - This would be a solid sideboard option, but I feel like Mystical Dispute is just way better in Standard.

Pursued Whale - 1 - Way too much mana for this, I do not expect this to see any play outside of just for fun. 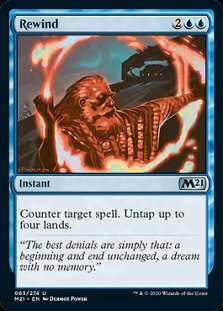 Rewind - 2 - Rewind allows for some crazy tempo swings, especially early in the game. For example, if you can Rewind your opponent's spell on turn four and then play something like Nightpack Ambusher, it will put you so far ahead.

Sanctum of Calm Waters - 2 - This is one of the strongest shrines in my opinion. You should need one other shrine to go through your deck extremely quickly. Seeing three cards at the start of your turn every turn will bury your opponent in card advantage.

See the Truth - 2 - At the moment this card is hard to cast from anywhere else but your hand. You could do it with Light up the Stage or Dreadhorde Arcanist but that is not reliable. Do not expect this card to see much play unless Wizards gives us something like Snapcaster Mage or something similar in a future set.

Spirits/fliers has a lot of tools and it keeps getting more and more. It's only a matter of time before that tribe becomes very good if Wizards continues to print fliers/spirits. This archetype will also benefit from when Tef3ri rotates from Standard.

Stormwing Entity - 2 - Really need cheap spells to make this playable alongside other elementals or creatures with Prowess. Typically, we would see this in a

tempo/burn shell. Those types of decks just are not particularly good right now with Teferi, Narset,

draw/life gain, and Wilderness Reclamation be legal. It is why Arclight Phoenix has fallen out of favor.

Sublime Epiphany - 2.5 - Super Cryptic Command! The Blue mage's Casualties of War. Just like Casualties of War, this is card is awfully expensive but also immensely powerful and extremely versatile. You will want to play this alongside some creatures to really get the full benefit out of it. Maybe Risen Reef.dek?

Teferi, Master of Time - 4 - Teferi, Master of Time is particularly good! The ability to activate him during both players turn is unlike any planeswalker we have seen before in Standard. His loot ability allows you to quickly cycle through your deck and fuels cards like Uro or Jump-Start cards. He protects himself and his minus ability will win you the game. In the right shell or when he is played on an empty battlefield, Teferi, Master of Time will wreak havoc.

Teferi's Ageless Insight - 2 - Fun card, especially alongside Teferi but I do not expect this one to see play in tier 1 decks. 4 mana to do nothing the turn you play it is just too much of a drawback. Again, especially in a world of Narset and Teferi, Time Raveler. 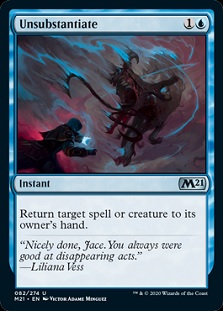 Unsubstantiate - 2.5 - To abuse this card's built in card disadvantage you will have to be a tempo deck. Card is powerful if you are killing your opponent's quickly but does not do much if you are not.

Teferi, Master of Time is incredibly good but not as warping or as good as Teferi, Time Raveler. He will not warp the format like Teferi, Time Raveler but if left unchecked, he will take over a game. Thankfully, he is particularly bad if you are behind and heavily benefits from entering on an empty battlefield. Barrin does not have a home yet but when he finds one, it is going to be an annoying card to deal with. My favorite card from Blue is easily Discontinuity. Love all the little things you can do in a built in Stifle, Time Walk, Fog, and Summary Dismissal. The cost reduction on your turn is chief's kiss!

That's it for today! Tomorrow we will be going over the Black and multicolored cards, make sure to tune in!