As many of you know, itâs that time of year. YAHOOOOOOOOOO! So, you better watch out, you better save some money, and you better get hyped, because Aether Revolt is soon upon us, and weâre gonna riot! Get it, Revolt and Riot? â.â.â.â Some cards from Aether Revolt have made their way into the public eye and theyâre awesome! One even foreshadows my favorite Magic character of all time, Nicol freaking Bolas! Who canât love a dragon Planeswalker whoâs very touch causes a mind shattering ability that makes sensical thoughts nearly impossible? A dragon whoâs schemes span ages and infinite pawns. Itâs always exciting to see what heâs planning. This elder dragon isnât evil, heâs just misunderstood. All he seeks is power. Just like Dark Confidant. How can you call someone evil that is just following their dreams?

That greater power is always Nicol Bolas and Iâm always willing to play Bolas in any format, competitive or casual. Fun fact, I went undefeated in the Extended portion of Worlds in Chiba Japan with a four color deck playing two Cruel Ultimatums and the Forever Serpent himself. For nostalgic reasons, this was what I played to a 19th place finish at Worlds in 2010.

Enough about my past success. Today I want to talk about cards Iâm most excited about from Aether Revolt and some possible homes for them. Letâs start with mini Cruel Ultimatum.

âWhen youâre the bad guy, you can break all the rules.â 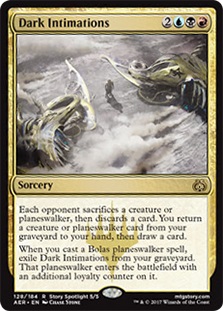 Did you know that intimations mean hinting or an indication of? Nicol Bolas will most likely not be in Aether Revolt but in the next two sets after Revolt. Probably not Amonkhet, but the one after, Hour of Devastation. Letâs talk about this sweet card!

This is basically equivalent to Tidings as far as card advantage goes, except you must work for it. However, the payoff can be tremendous if you regrow a Planeswalker or Goblin Dark-Dwellers / Gearhulk. Youâll force your opponent to try and kill you before you snowball out of control with card advantage. We canât fully abuse Dark Intimations since there is no Nicol Bolas Planeswalker card to play, but thatâs all right for now. The card can still reward us big time if we build around it correctly.

Next up is another card that happens to play well in our Grixis shell. 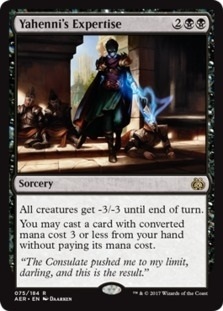 The text âyou may cast card without paying its mana costâ is both exciting and scary. Since itâs attached to a control spell and not something like Collected Company or Aetherworks Marvel, I am leaning more toward the excited part. I know this card can do some silly things in Modern and older formats, but I just want to focus on its Standard applications for now. Control and Midrange decks get Bloodbraid Elf in a non-creature form. We gain control of the cascade but lose the raw card advantage that Bloodbraid Elf generated. Again, thatâs fine if we build correctly. The âthree or less converted mana costâ happens to work fantastically with Goblin Dark-Dwellers too.

Some great cards in Standard that we can cast off Yahenniâs Expertise:

And the list just goes on. This isnât even venturing into White cards, but the list was getting pretty long. You can make a tap out control / midrange deck or play a control deck with this card. Heck, you could even play a ramp deck of sorts that plays Yahenniâs Expertise. I expect this card to be a fantastic card in Standard and do some broken things in older formats like Expertise into Ancestral Vision, Living End, or Restore Balance. Very powerful card most of the time and not hit or miss like Aetherworks Marvel tends to be. 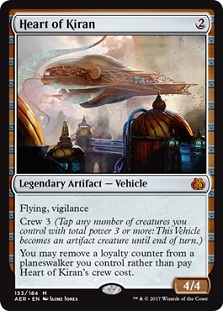 Control finally has a sweet way to protect Planeswalkers in vehicle form. Sure, it may not loot but this thing blocks opposing Smuggler's Copters then kills them. It puts the pressure on Gideon, Ally of Zendikar right away since it has 4 power. Forcing a Gideon to +1 instead of making a knight is fine too since now Ruinous Path will be a one for one. Usually after you Ruinous Path a Gideon the opponent is left with a 2/2 Knight Ally. Imagine this scenario:

Player A plays a land and passes.

Player B Smuggler's Copter and attack for one.

This is great for control players, only drawback is Heart of Kiran is legendary but thatâs probably for good reason. Heart of Kiran is going to be a great role player in planeswalker control decks since it can do offense and defense very well and at the same time!

Control decks get a new counterspell to play with too! 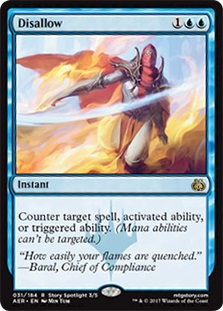 This is literally just a Mono-Blue Voidslime. Green doesnât really like to play Countermagic often so Voidslime wasnât played much. However, Disallow will be. You can now stop Aetherworks Marvel Activations, Emrakulâs Mindslaver ability (especially if you have something like a Fumigate in hand), and Planeswalker Ultimate abilities. A Liliana on turn three doesnât spell death anymore if you donât have the Ruinous Path. You can literally just stop her from going ultimate with Disallow. Countermagic usually sucks against aggressive decks, especially ones that utilize the graveyard. You can now use your Countermagic to stop a Scrapheap Scrounger from coming back onto the battlefield thanks to Disallow. Your opponent will be very weary of Ultimating Gideon if you have mana up. A counterspell with choices is fantastic and control really needed this. My favorite decks are ramp decks but Iâm very glad control is getting better tools.

All right so those are the cards that Iâm hyped for and can brew decks around since they can all work together. Letâs look at a list with Dark Intimations.

Put your brainstorm cap on folks!

This deck tries to abuse Dark Intimations and Yahenniâs Expertise to the fullest. To do that, we canât really play Countermagic like Negate or Disallow here since it doesnât work well Yahenniâs Expertise. Instead we try to generate value or tempo off Yahenniâs Expertise. Clearing the battlefield and then dropping a Lunar Force is going to be backbreaking. It not only forces our opponent to rebuild, but now they also must get past the Lunar Force to do that. This will allow us to regain tempo and put us in the driverâs seat. Casting something else like Liliana, the Last Hope, Oath of Jace, Heart of Kiran, and even Pilgrim's Eye is fine too. Anything attached to this spell is going to be good to backbreaking. I wanted all our cards to generate some sort of value so we could abuse Expertise and the tap out style to its fullest. This is one reason why I chose to play Nagging Thoughts over Anticipate. When you have 6 mana you can cast Expertise and cast Oath of Jace or Cathartic Reunion off said Expertise. You can then discard Nagging Thoughts to Oath of Jace or Cathartic Reunion and cast it at the same time. So, for 6 mana, Yahenniâs Expertise, two cards to discard; you get to give all creatures -3/-3,draw three cards, and look at the top two cards of your library putting one into your hand and the other into your graveyard. You basically get to draw a new hand in that scenario. Nagging Thoughts will fuel Goblin Dark-Dweller, Liliana, the Last Hope, Dark Intimations, and help turn on delirium. Might even be right to run three or four in this deck. You could even add a mini reanimation theme by playing one Ever After main deck.

Why Gonti main over Kalitas? Again, Iâm trying to get as much value as possible. Gonti provides value in the card they steal and even more so if they trade with a creature. Getting Gonti off Dark Intimations will generate more card advantage than Kalitas would. Running things like Pilgrim's Eye and Gonti allows us to run one Morbid Curiosity. Morbid Curiosity is great with Pilgrim's Eye, Gonti, or even Goblin Dark-Dwellers keeping our hand full of action. Currently I have Emrakul, the Promised End in the sideboard but this deck has all the types in it to reduce Emrakul to 6 mana if you have full delirium. Depending on what you expect it could be right to cut something like Lunar Force or even a Dark Intimations for a main deck Emrakul, the Promised End.

Another thing I want to note is I want to run Pilgrim's Eye over Filigree Familiar here because we need to insure we hit or land drops and Pilgrim's Eye blocks more things since it flies and gets us the extra card as soon as it enters the battlefield. We donât have to rely on our opponent to attack to get the extra card. Sure, in the late game a basic land might be worse than a random drawn card but again you get it right away and we have ways to draw then discard cards in Cathartic Reunion and Oath of Jace.

This deck might not want Lunar Force or Oath of Jace. Maybe Cathartic Reunion and Tormenting Voice are just better. You could even throw in a Panharmonicon and more creatures in here to generate an insane amount of value. Double Dark Dwellers and Gonti triggers sounds spicy. We are just scratching the surface for Aether Revolt folks and I donât know about you, but Iâm stoked!

As always, thanks for reading.

Forever a Disciple of Bolas,