I've always been a fan of big blue creatures. When I started playing the game, Sea Serpent was among the few common creatures that could compete on size with the mighty Craw Wurm. 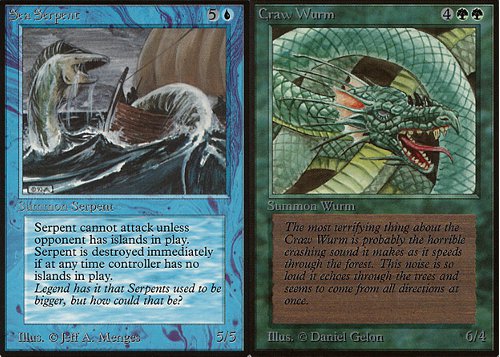 How far we've come since those days.

Shortly after that, The Dark was released, and for the next couple of years, blue ruled the roost with the biggest, baddest creatures you could imagineâfirst Leviathan, and later Polar Kraken. 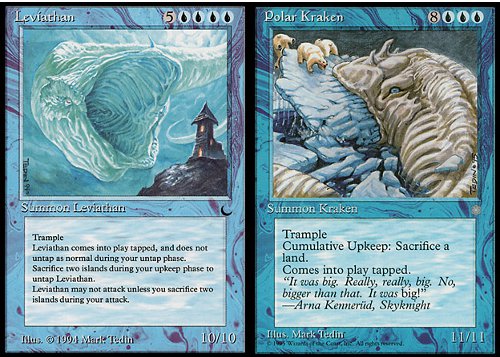 I paid $10 for a copy of Leviathan, and I could barely sleep that night in anticipation of how completely I would destroy all of my friends at school the next day. Of course, when my singleton Leviathan finally showed up in one of my games, it ate four of my Islands before smashing through a Wall of Ice and hitting my opponent for 3 damage. He untapped, cast Stream of Life for 10, and killed me with a bunch of Grizzly Bears and War Mammoths.

Many years later, while cutting 3D cards for the Middle Earth CCG, I came across this painting by John Howe: 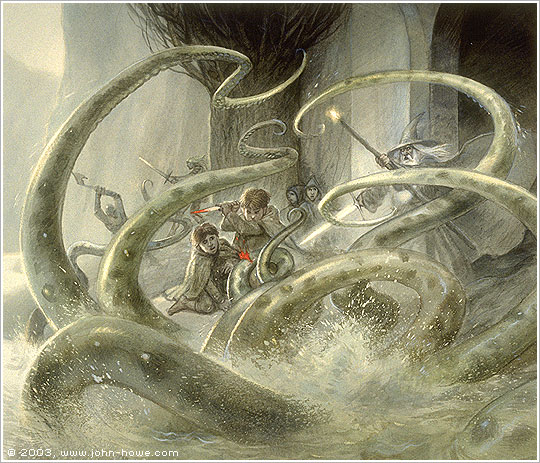 The art was used on the creature card for the Watcher in the Waterâthe mysterious creature that lurked outside the gates of Moria in The Lord of the Rings. I always wanted to make a 3D version of the card because I thought the interweaving tentacles would look great in 3D, but I never found enough copies before I turned my blade to Magic cards.

Luckily, it wasn't long after I made the switch that Zendikar was released, and it contained an Octopus. Not just a dinky 3/3 Giant Octopusâ.â.â.âbut a Mega Octopus. I wasted no time in acquiring a stack of Lorthos, the Tidemakers and cutting them to pieces. 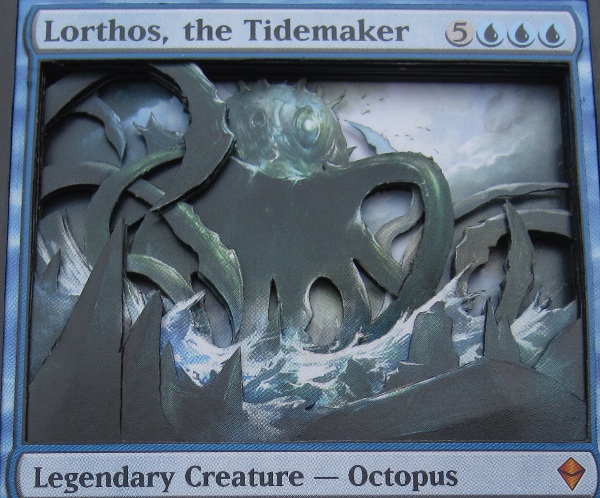 These days, every time blue gets a card like Lorthos or Ludevic's Abomination, it takes me back to my early years of Magic and makes my inner blue Timmy smile.

Blood in the Water, Son

Since Commander is the only Constructed format I play with any regularity these days, I sometimes listen to CommanderCast. It was while listening to these fine gentlemen when I learned that all those years ago when The Dark was release, I had fallen in love with the wrong overcosted, underpowered blue creature. 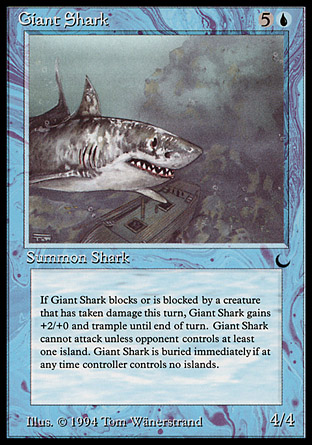 For some reason, the guys of CommanderCast have an unhealthy obsession with this awful card. Initially, I didn't think much of it, but then two things happened. First, I became aware of one of the worst movies of all time. 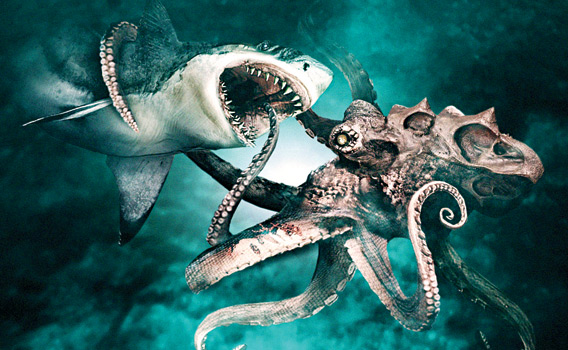 Then, I came across an episode of CommanderCast in which one of the guys said someone needed to alter a Giant Shark so that the shark was popping out of the art.

Clearly, I needed to make a Giant Shark to go with my Mega Octopus!

A simple 3D Giant Shark can be made using just five copies of the card. To begin, remove the far background from one of the Giant Sharks. 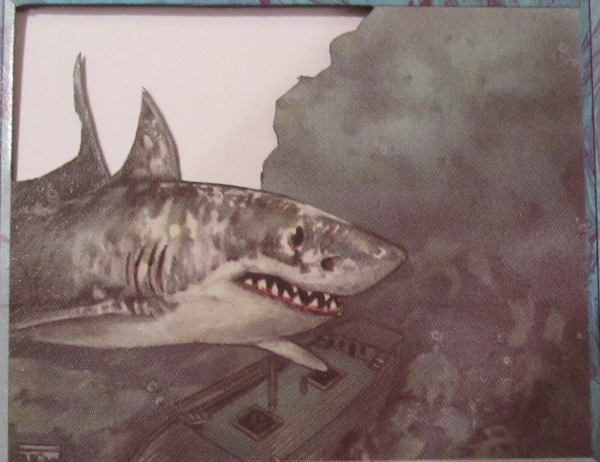 I'm not sure what the next layer forward is supposed to be. Is it a dust cloud? A rock wall? The remains of the iceberg from which this horrifying prehistoric beast escaped?

Whatever it is, cut it out and throw it away. 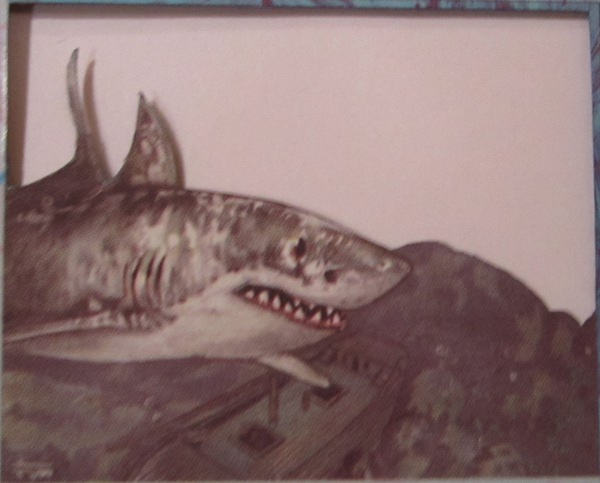 Since that layer is the ledge below the shark, the last couple of layers will make up the shark's body. At first, I thought this was some sort of mutant shark with one normal dorsal fin and one weird, thin one. Now I'm pretty sure it's the shark's tail fin, but I could be wrong. For all I know, it's a butcher's cleaver stuck in his hide. 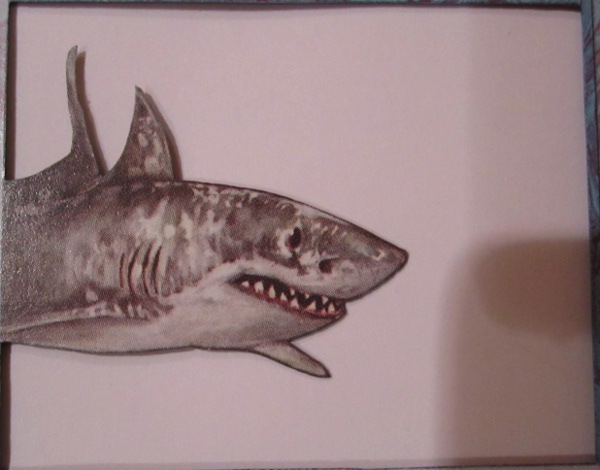 Actually, since this is a Giant Shark, there's no way it's a cleaver. Maybe it's the remains of a battleshipâ.â.â.âno, those don't exist in the Magic universe. I guess I'm sticking with tail fin. Go ahead and cut a layer without it so the tail-fin layer can be behind the rest of the body. Also, remove the pectoral fin sticking out from the bottom. 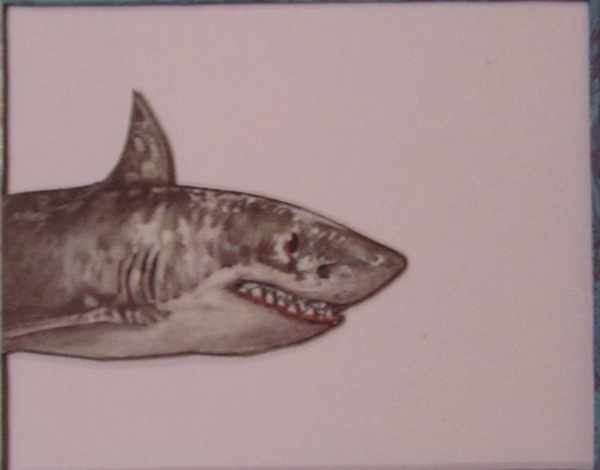 Once your four layers are cut, you'll need something to space them out a bit. For mine, I used a bunch of old blue commons with the art removed:

In that picture, you can also see that I colored the outer edge of the card black. I haven't always done that, but I usually do these days. It takes a few minutes, but it looks cleaner than the grey that shows otherwise.

Stick a couple spacer layers between each of the Giant Shark layers, put the fifth, uncut copy of Giant Shark behind them all, and you should end up with something like this: 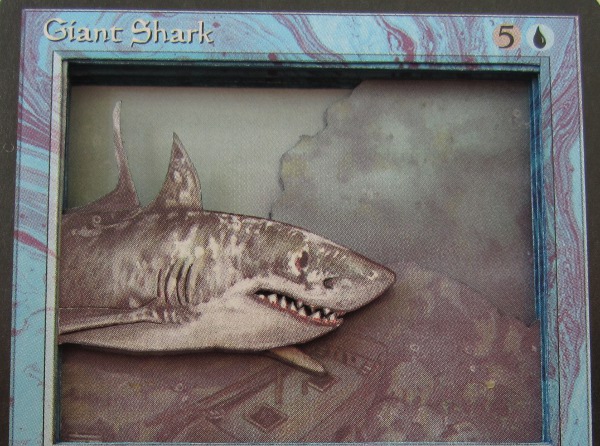 I decided my Giant Shark wasn't intimidating enough and that it needed more complexity. The first thing I wanted to do was make the ledge below the shark more horizontal. For that, I cut away the ledge from the art box on the sides and bent it backward, like this: 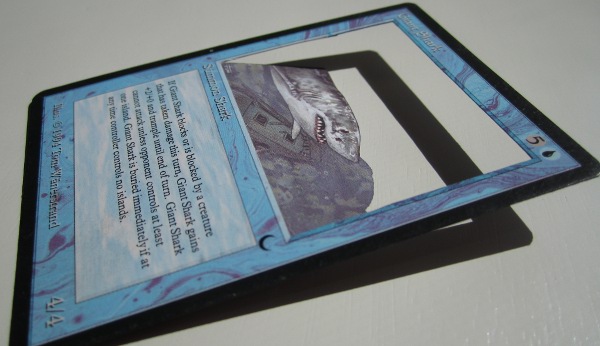 Next, I cut out four detail pieces to make up the ship, the ship's broken mast, and some of the rocks on the ledge:

I used my shaping tools to add some curve to most of the pieces and layers. Most of my effort in this area was focused on the Giant Shark's body. In addition to shaping the body, I cut and bent forward the pectoral fin and cut slits for the gills.

The last thing I did was bend the body forward so that it looks like it's swimming out of the card art. Make sure to always tap to the left so the shark is swimming right at your opponent's face!

Because of the slanted ledge layer, the stack is a bit different than just putting a couple spacer layers between each Giant Shark layer. 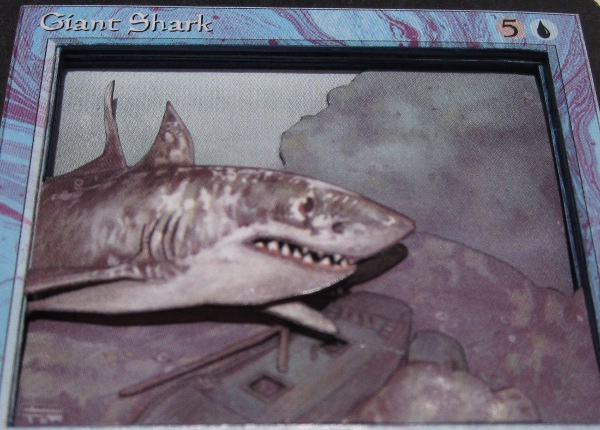 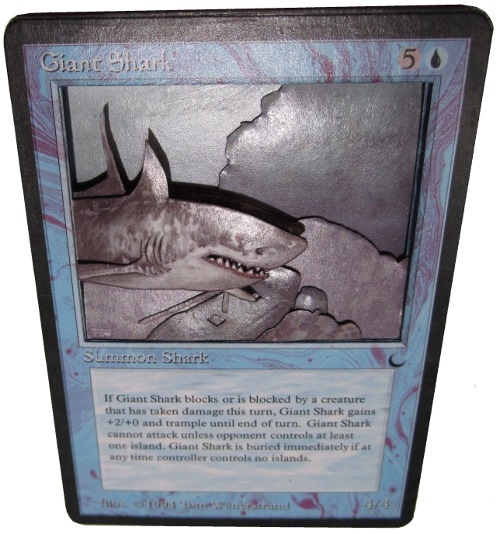 In addition to bringing the awesomeness of Giant Shark to the community's attention, the guys on CommanderCast have done some other great stuff. One of the biggest is their Gifts Given program. Using donations from listeners, they've raised over $1,500 for the Child's Play charity on eBay.

Unfortunately, the last of their Gifts Given auctions just went up, so I was too late to donate this 3D alter through themâ.â.â.âbut the great thing about eBay is that anyone can do a charity auction! I've posted this 3D Giant Shark as a charity auction here.

If you want to have a 3D card made but want something different instead of the Giant Shark, you can still help the kids! I also put up an auction for any 3D alter of your choice. I haven't taken on new commissions in four months, and I don't know if or when that will change, so if you want a card from me, get it now. Think of the children!

For now, though, I think I'll get some rest. 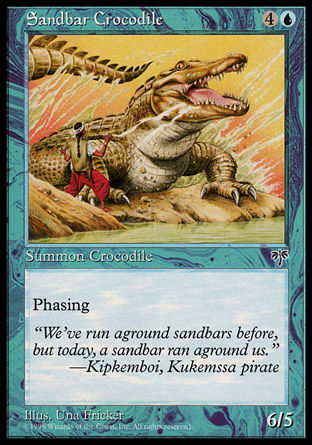