The excitement surrounding Return to Ravnica keeps growing. Every day, I see people on social media who previously quit Magic saying they've decided to come back because the set looks so amazing.

Of course it looks amazing. Every set these days is amazing!

At the same time, I'm becoming more excited about cutting cards than ever. There is some great art in this set, and there are guaranteed to be some sweet legendary creatures leading the guilds. That was certainly the case last time we visited Ravnica. With twenty guild leaders and champions across the three sets, I had many more cards I was excited about destroying than hours to put blade to cardboard.

In addition to the Teysa, Orzhov Scion and Grand Arbiter Augustin IV that I made for previous articles (here and here), I've made 3D versions of Momir Vig, Simic Visionary, Isperia the Inscrutable, and Chorus of the Conclave.

Many of the other Ravnican heroes and villains are sitting in my âsome dayâ binder, but based on the new cards we've seen so far, I think most of the old guard will be sitting in the binder a bit longer. While Lydya, Lexya, and Ludmilla (the Sisters of Stone Death) have great art for a 3D card, their abilities are a bit lackluster for Commander compared to those of Golgari's new head honcho Jarad. The ideal 3D Commander has both great art and great abilities; while Jarad's sister Savra, Queen of the Golgari has great abilities, her artwork is too murky and dark to put under the knife.

The returning leaders of Azorius and Izzet have that winning combination, but as much fun as it would be to plan out 3D versions of the new Isperia and Niv-Mizzet, I think the best way to celebrate returning to Ravnica is to work on one of the old champions. Who better to choose than the man at the center of the original Ravnica storyline, Agrus Kos? 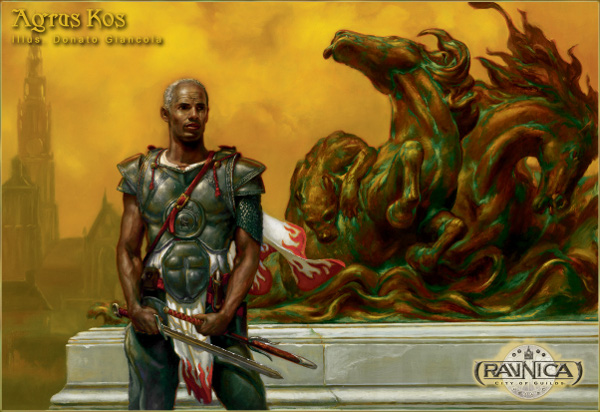 Last time we visited Ravnica, Agrus Kos was busy uncovering a Dimir plot to destroy the Guildpact. Since he's the man who took down Szadek, Lord of Secrets, it's no surprise that Wizards made his artwork the wallpaper of the week during the original set's first week of previews.

I'm always thankful to have a higher-resolution version of card art available when I'm planning how to build a 3D card. It's also interesting to see how just a little bit of cropping can shift the feel of a piece of artwork. On the card, most of the buildings in the background are cut out and the frame is tighter on Agrus Kos. Extending the space around Agrus and adding those buildings back in changes the feel from âman of actionâ to âman alone in the big city.â

If you look closely at the inside borders of the 3D Chorus of the Conclave and Isperia the Inscrutable from above, you can see that I colored the inside border to match the two-color borders of those cards; each has an interior border that is half white and half its other color. For Agrus Kos, I'm not going to do that; I'll stick with solid black like I did the last time I made a R/W 3D card.

If you've never made a 3D card before, Agrus Kos, Wojek Veteran is actually a fantastic card to start with. Each of the elements of his artwork is cleanly separated from the next. Most of the cutting is not very difficult, but there are couple tricky spots for a fun challenge. Best of all, you can pick up four or five copies of Agrus Kosâenough for a simple 3Dâfrom CoolStuffInc for less than $5 including shipping!

For this version of Agrus Kos, I'm going to use eight copies of his card. I start out by breaking things down into the basic layers. If I were making a simple version, I'd simply cut out these three basic layers:

Behind all of that, put an uncut copy for the sky or swap in your favorite Ravnica basic land to put him in a different part of the city.

Those are the main basic layers I'll use for my more complicated version, but I'll add a couple extras for more depth. I start out by cutting out Agrus's body. 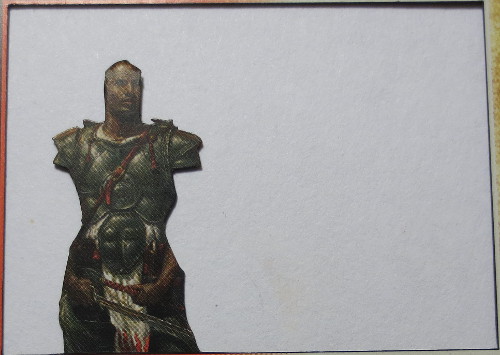 This layer is missing his arms and part of his head because I plan on using detail pieces for those, which I'll cut later. For now, I move back to the next section. Instead of leaving the statue as one layer, I decide to use four layers and a handful of detail pieces. First, I cut the concrete base: 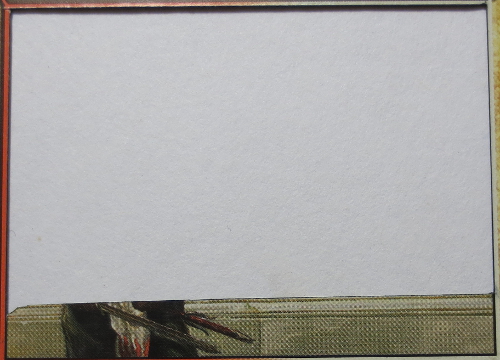 I bend back the top part of the concrete base so it's slanted toward the next layer I cut, which is the foreground squiggles of bronze. 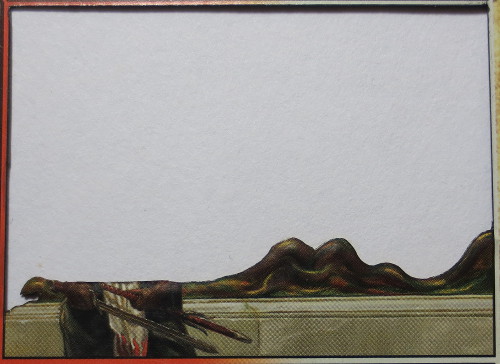 There's not a great way to actually cut those squiggles and try to weave them together, so instead, I use my shaping tools to give them more depth. That shaped depth is more visible in some of the later pictures.

The next two layers are the bodies of the horses. They don't need to be full layers since not everything will be visible in the completed 3D card. I can cut just what will be seen and save the rest for cutting detail pieces later.

If you look closely at the head of the horse on the left, you can see a bit of how shaping the pieces adds some depth.

Unlike in the outline for the simple 3D Agrus shown earlier, here I make the building in the background a detail piece instead of a basic layer. I cut the rest of the detail pieces at this time as well. I find I work much more efficiently (both in terms of time spent and number of cards destroyed) if I make a list of all the detail pieces I want to cut and then working my way down the list rather than cutting one piece at a time and figuring out what other pieces I need as I go. 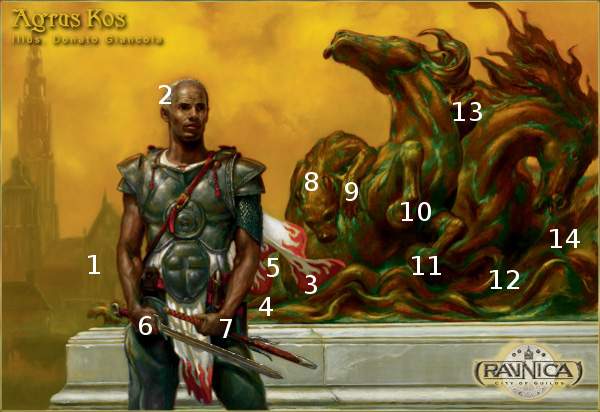 After coloring all the edges, I use my shaping tools on every detail piece except the building. Next, I shave off the backs of a few key spots to make pieces more thin and transitions smoother. For Agrus's body, all of the cape pieces, the head, and the shoulders are shaved thin in this way. Assembled, his body looks like this: 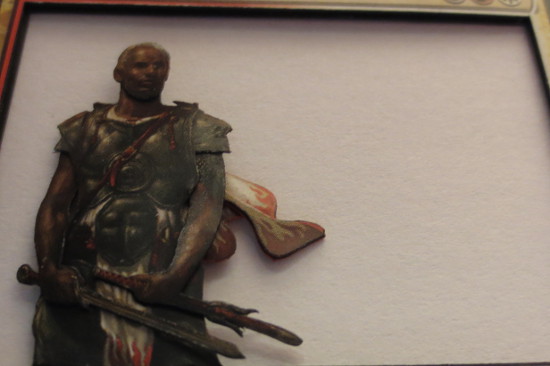 For the statue, less shaving is necessaryâonly the arm of the dog-like animal and the back of the main horse's neck (where it connects to the mane). I put a spacer layer between the concrete base and the rest of the statue layers so the top of the concrete can actually bend back, then finish assembling the statue. 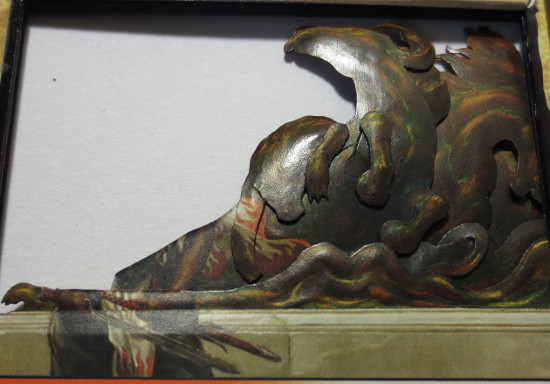 Since there is a lot of distance between Agrus Kos's body and the sky, I do a quick, mediocre paint job on my sky layer to make his face and shoulders in the sky less distracting. 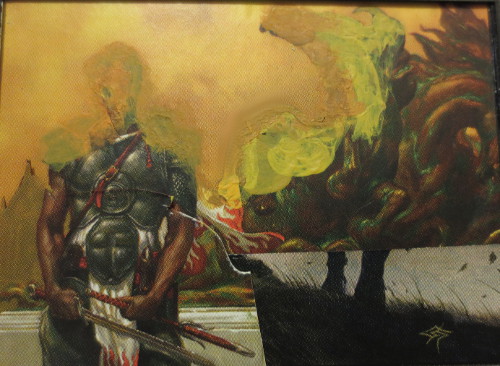 The last two copies I cut are to raise the frame and info boxes of the card; making the artwork 3D only takes six copies. 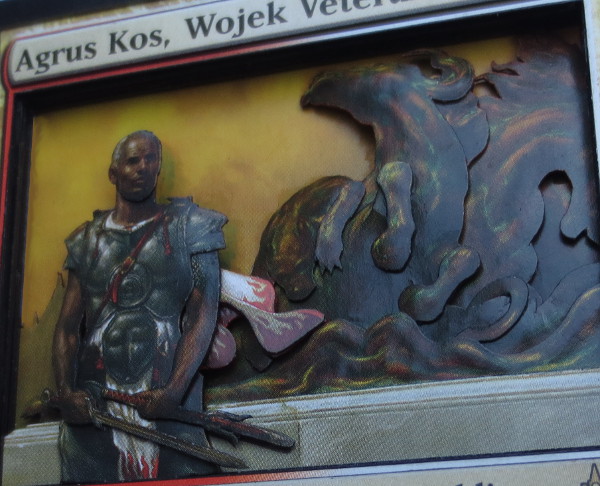 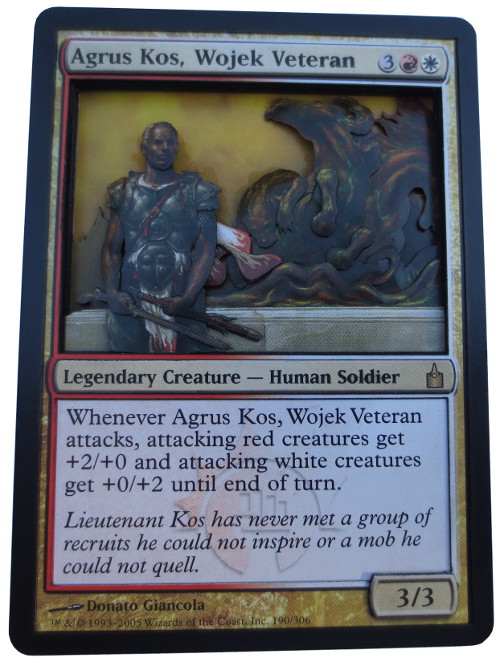 While Boros won't be crashing through the gates until February, I may have to build a Boros legion for Agrus to lead. Maybe I'll take inspiration from this CMDR Decks episode.

This is the first 3D card I've posted in a whileâwhat about you? What alters (3D or otherwise) have you been working on? Post links in the comments or head to the forums to share them there!