Why do people love token creatures so much?

Iâm a big fan of tokens, too, but Iâm not sure why that is. My most recent deck is a Thelon of Havenwood Commander deck that focuses on pumping out piles of Saprolings and overpowered Fungi. My first Commander was Karona, False God, and while that deck has gone through many versions, my favorite is still the configuration that made a lot of tokens of multiple types and used Karona to pump whichever type dominated my board. 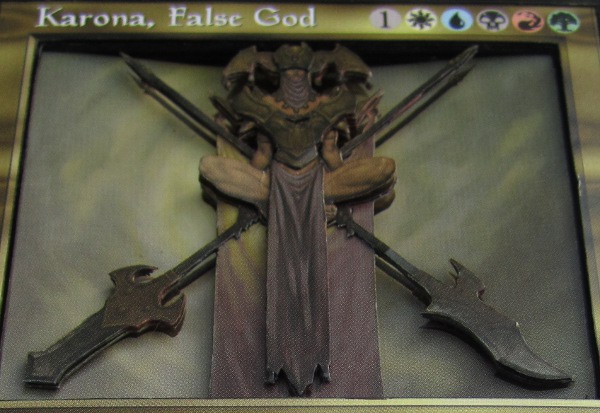 One of my favorite plays with that deck was to drop Karona and swing with my entire army, leaving back no blockers. With three other players in the game, that meant I was wide open to three hits of 8 Commander damage as Karona made her way around the tableâa fact I eagerly pointed out each time. Occasionally, the other players would all decide to kill me off, but more often, at least one player declined to help take me out. Often, the act of pointing out my willingness to die and giving the other players the tools to do so for a moment made them write me off for the rest of the game, allowing me to go under the radar and pull off a win. What types of gambits have you taken in games that have paid off big time?

In addition to simply being cool, tokens are great options for 3D cards. Like Commanders, they sit outside your deck, so being thicker than a normal card isnât a problem. Unlike Commanders, most of them are easy to find and cheap to pick up in multiples.

Availability was the primary factor that led me to choose the Alara Reborn Bird Soldier token for my first 3D Magic card. 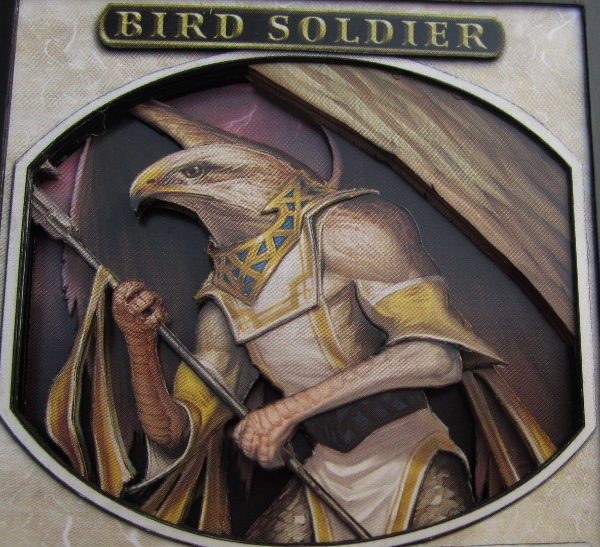 As a lover of tokens, Iâm always saddened when I want to use a card that makes a token that doesnât exist. My Teysa, Orzhov Scion deck is still missing Bat tokensâthe Guildpact token only exists on Magic Online. 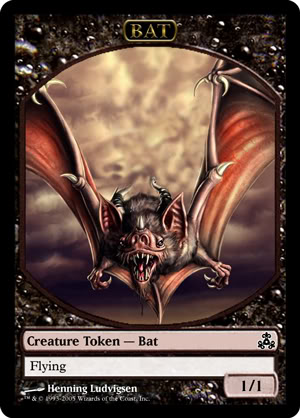 When the theme of Innistrad was announced, I was excited to finally have a Bat token printed! There was no way they could print a gothic horror set full of Vampires without any Bats, right?

Oh, well. I hope Dark Ascension will make up for that mistake.

Penumbra Spider is a popular inclusion in Pauper Cubes, and the shadow token it leaves behind when it dies doesnât exist in paper either. While I can hope for the printing of a Bat someday, itâs unlikely that there will be a need for another 2/4 Black Spider token.

Sometimes, 3D tokens can be unwieldyâoften, the decks that make one copy of a token want to make multiple copies. Having a 3D Saproling would be nice, but Iâll never have enough for games in which I control Seedborn Muse and Gaeaâs Cradle feeding Sprout Swarm. A Penumbra Spider token wonât have that problem because there will rarely be more than one on the board in any Cube Draft game.

My plan to create a 2/4 Black Spider token starts with making a 3D version of the 1/2 Green Spider token from Shadowmoor. The Innistrad art would have been an option as well, but the art is a bit too dark to make a good 3D card.

Unfortunately, the Innistrad tokenâs art was printed much darker than in this image.

Because of the perspective of the tokenâs art, I decide it will look best to have the pond and ground slanted backward. This layer will be on top of the stack and slant back behind the other layers. Itâs something I do regularly now, but itâs trickier with the rounded frame of token cards because I have to cut away more of the art from the frame. 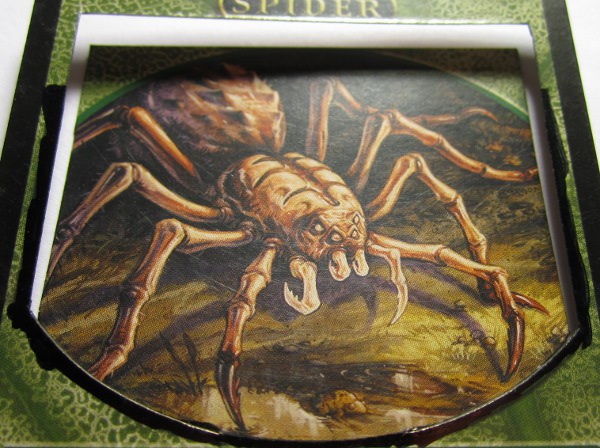 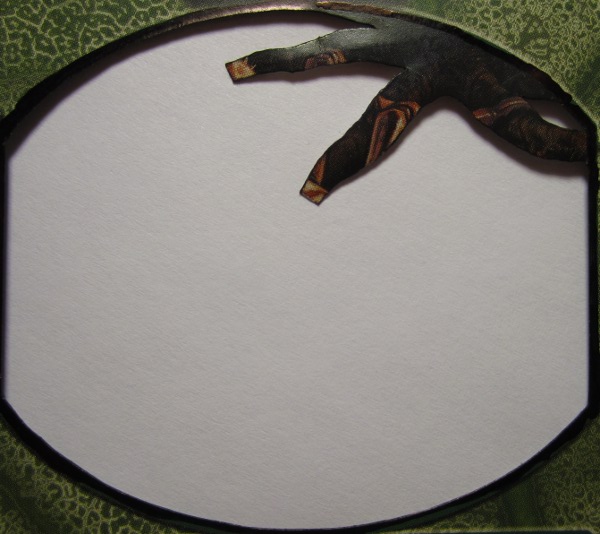 After shaping the roots to make them more rounded, I move on to the spider. My plan is to have each part of the spider that reaches beyond the card frame be its own layer. Then, Iâll use detail pieces to make up the rest of the spiderâs body.

The first part of the spider I cut is the abdomen. Like the roots, it needs to be shaped a lot to be more rounded. 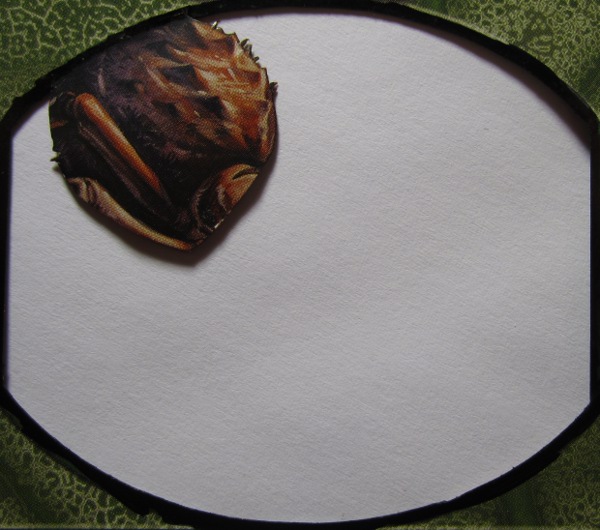 One at a time, I cut a layer for each of the spider legs that extend beyond the frame: 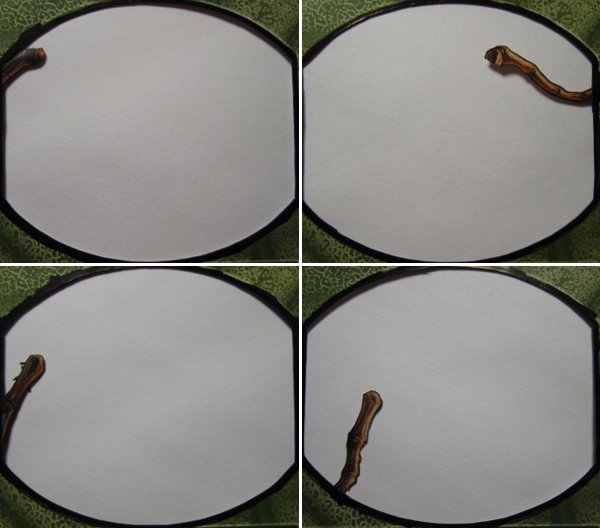 Next, I construct the main layers in two parts. The slanted layer, some spacers, and the leg that extends beyond the bottom of the frame are in one pile, and the tree, abdomen, and legs that extend off the sides are in the other pile.

With all of my basic layers cut and assembled, I move on to the detail pieces. Most of them are parts of the spider; the only other detail piece is the frog.

I bend the femurs on Pieces B and G at different angles to make it look as though the legs are going in different directions, and I bend the layer parts of the legs to match. In order to get the two parts of each leg to attach smoothly, I shave off the back of the overlapping part. Here, you can see the partially constructed body with the tips of the femurs partially shaved off: 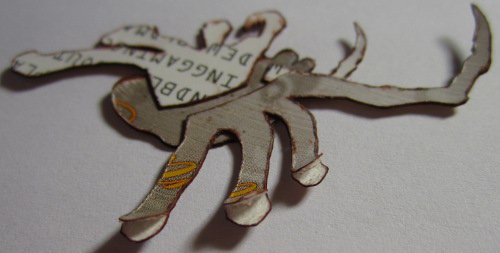 I continue to assemble the spider, adding on the rest of the detail pieces: 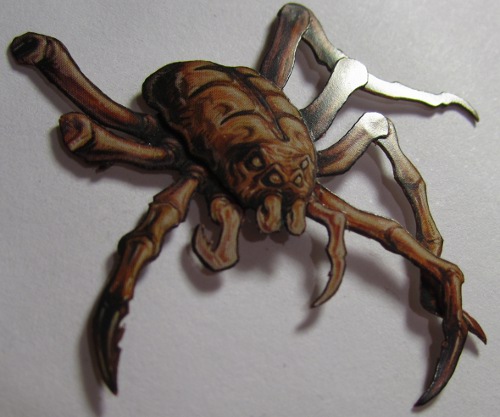 After construction of the spider, I still have to turn the card into a 2/4 Black Spider. To make it Black, I use the frame from one of Innistradâs Vampire tokens. It has to be a token with an ability because otherwise, the size and shape of the art box wonât line up. The only options are the Vampire or the Faerie Rogue token for Bitterblossom. Then, to make it a 2/4 Spider, I use the name, type, and text box from another Spider token and the power/toughness box from an M12 Giant Spider. 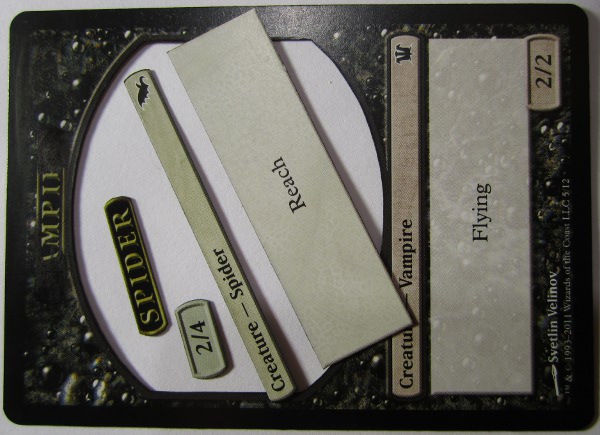 Because the name box on the Vampire token is bigger than the Spider token name box, I color away the edges of the name box that would be visible if uncovered.

Something to keep in mind if youâre making Magic tokens is that the tokens in booster packs are printed on a slightly different card stock than Magic cards, and they have different card backs. 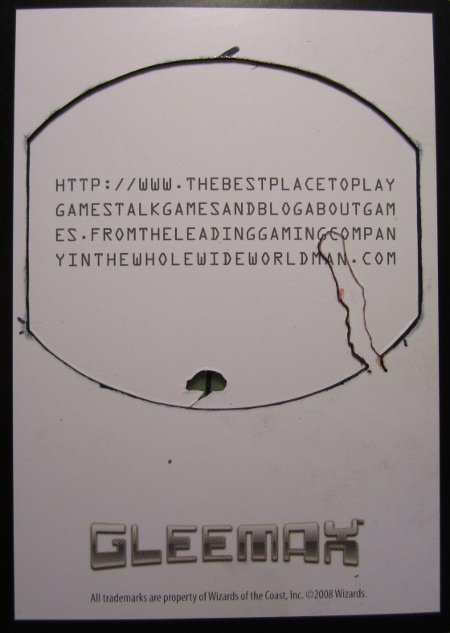 Like the recent unpopular decisions by Wizards, the existence of Gleemax.com was quickly corrected.

This means two things: cutting parts of the card thin (as I did to the tips of the femurs) is different, and the back of the completed 3D wonât be a normal Magic back unless I add a random common there. 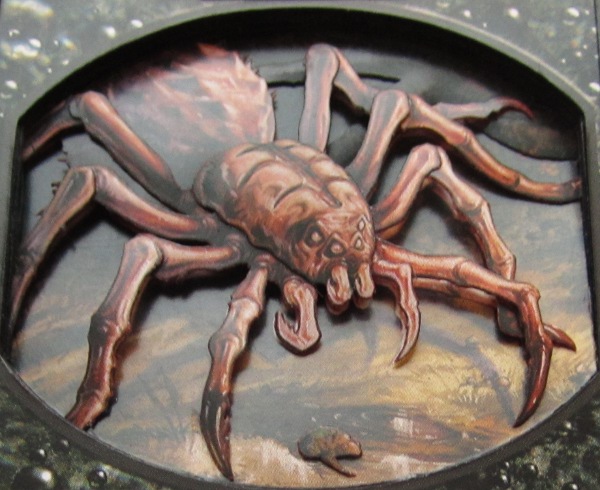 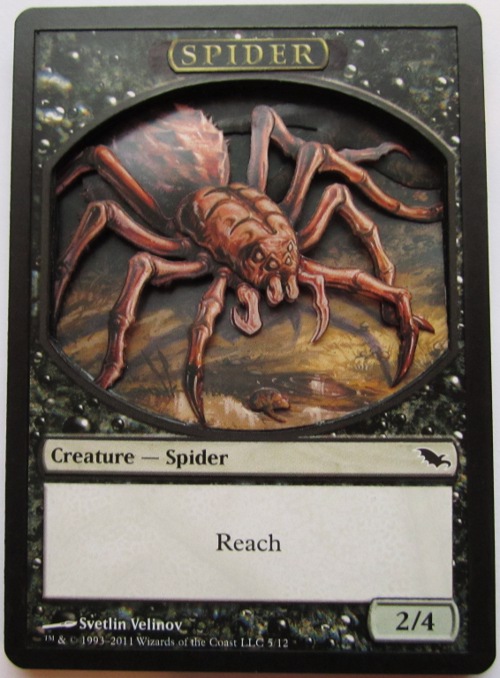 So, what do you think? Why do people love tokens so much? Are you a token-lover, or have too many confusing jumbles of dice scarred you to the point that youâre packing AEther Snap and Evacuation in all of your decks?

What other missing tokens would be good options to create using 3D methods?