In this experiment, we strike with a pair of disasters using shimmering heat and cackling.

Magic: The GatheringâCommander (2014 Edition) is coming, and with it come a bunch of new cards. Among them, there bounds to be some potential for combos. Indeed, the revealed Dualcaster Mage performs a very powerful effect in a form thatâs easily abusable. Normally, Fork effects are on spells, and spells are hard to recur; meanwhile, because of how hard spells are to recur, copying a spell can be very strong. Dualcaster Mage copies a spell but does so in the form of a creatureâand creatures are eminently easy to recur or otherwise repeat. 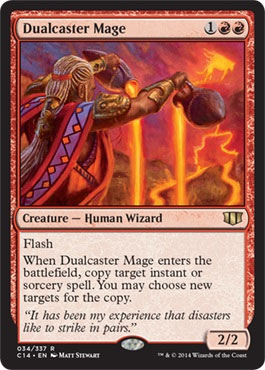 Now, itâs not quite as strong as copying a spell for only mana, such as with the ability offered by Nivix Guildmage, but it does create new opportunities, such as with Deadeye Navigator.

Thatâs the deck I ended up with, though of course you can borrow concepts, rebuild completely, or just toss a few of these cards into your Riku of Two Reflections Commander deck.

Letâs start with an empty stack. We control Dualcaster Mage.

We now have an army of hasty 2/2s ready to kill our opponents.

We can enact a similar plan with Cackling Counterpart in lieu of Heat Shimmer. The downside is that we wonât be able to attack for infinite damage that turn. The upside is that weâll be able to keep our 2/2s. Cackling Counterpart can also stand in for the second copy of Dualcaster Mage that we would cast in response to whatever initial copying spell weâre using.

Since weâre already playing Cackling Counterparts, and since we may very well need defenses while we find our combo pieces, Mnemonic Wall seems perfect.

In addition to the Nivix Guildmage application I mentioned above, it can do another very powerful thing here.

While itâs not new, and while it has nothing to do with Dualcaster Mage, Nivix Guildmage can generate infinite mana with Turnabout. As long as we can pay the upfront

and have at least five lands, we can cast Turnabout, copy it with the Guildmageâs ability, untap our lands, and repeat for as much mana as we want.

From there, we can use the mana to activate the Guildmageâs first ability to dig through our library for everything we need. And once we have the Heat Shimmer and Dualcaster Mage, we can win the game.

A few more cards round out the deck.

Divination â This is the default draw spell, and it will help us early to find relevant pieces. We can reuse it with Mnemonic Wall and/or Nivix Guildmage.

Izzet Signet â The Signets are very powerful, and these will help ensure we can cast Divinations and donât miss land drops.

Mist Raven â With so many creature-copying spells, I wanted to make sure to have creatures with good enters-the-battlefield abilities. For defensive power, Unsummon is quite useful, and when we want to block opposing flyers or turn on raid for Howl of the Horde, the Ravenâs flying will be relevant. This deck has an interesting conflict between wanting more spells for the Guildmage, Mnemonic Wall, and so on and between wanting creatures with spell-like abilities for Cackling Counterpart and Heat Shimmer.

Dig Through Time â This new Khans of Tarkir card is very powerful and is seeing a good bit of Constructed play. Itâs also quite useful for finding combo pieces, and its cost-reduction mechanic means it will be easier to copy (as we can save mana casting it and spend that mana on the copy spell). Of course, it doesnât synergize super-well with Mnemonic Wallâs superpower, but thatâs a price Iâm willing to pay here.