Our return to the fan-favorite plane of Innistrad marks our return to another fan favorite, the double-faced-card mechanic. While Mel might gush about double-faced cards because of all the neat mechanical tricks the technology allows, Vorthos loves them for three simple reasons.

While I could definitely write an entire article about the overall flavor of double-faced cards, what I am more interested in right now is a subset of those cards, the Werewolves. Today, I will talk about the names and flavor text that works hard to bring our furry friends to life. 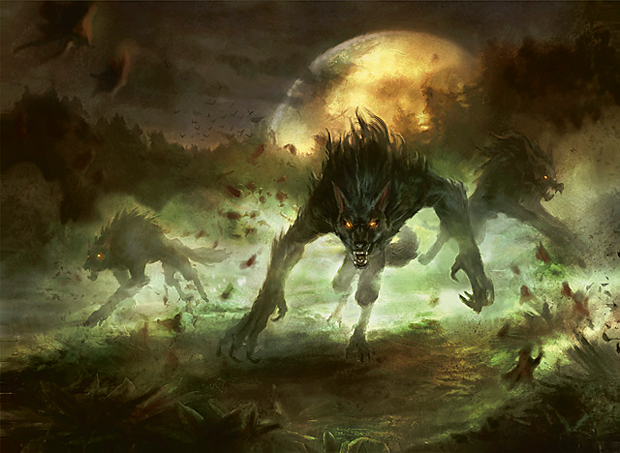 When a player encounters a card for the first time, that player is most likely going to read the card from the top down and left to right. Yes, the art may grab your eyes first for a brief second or two, but ultimately, when you attempt to soak in the magic contained within the cardboard between your thumb and index finger, you are starting in the same place you would on any page of any book. Because of this, the cardâs name plays the important role of setting up the player and building the expectations for what the rest of the card will unveil. Letâs look at an example:

This card's name is a single, powerful word that means âto defeat utterly.â Right away, interest is piqued, as we are going to expect to see not only a creature of some kind being destroyed, but also some interesting mechanics that make a creature get gone for good. Kev Walker ceases to disappoint us, showcasing the devastating result of Yawgmothâs Phyrexian engineering. The mechanics follow suit, providing an instant kill spell that matches the quick-sounding, one-word name as well as an anti-regeneration kicker that further drives home the point set up by the card's name. Thatâs a ton of heavy lifting being done by a single word. Werewolf names take this one step further.

Not only do the card names need to inform you of what the rest of the card is going to be about (both in flavor and mechanics), but the name also should remind you what card is on the other side. Breakneck Rider is one of my favorite examples of this from Shadows over Innistrad.

Letâs assume you went to your local Shadows over Innistrad prerelease having never seen a single card from the set prior to arriving. You crack your first pack and open up a Breakneck Rider as your double-faced card. The name sets you up to expect someone riding a horse at a dangerously fast pace, and Victor Adame Minguez delivers it on a silver platter. The card is otherwise vanilla, being a 3/3 for 3 that transforms into something better (a decent Limited body). You see that the card is a Werewolf, and so you flip the card over, expecting one on the reverse side.

This is where things become interesting. Because of the special nature of Werewolf cards, a unique instance occurs in that you have an expectation prior to reading the name. You flip that card over expecting a name that sounds like it belongs on a Werewolf. If the Werewolf side were called Friendly Cuddleface, it would shatter your expectations and create dissonance. Fortunately for this card, Neck Breaker delivers in a very straightforward and visceral way. Werewolves break necksâgot it.

On top of having to meet player expectations, the Werewolfâs name should help remind you what its Human form is. When you have a battlefield of Werewolves, you and your opponent have twice as many cards to track than you normally would. Using clever naming to remind the player which cards are on the backs of which cards helps alleviate mental strain while playing the game itself. Breakneck Rider // Neck Breaker handles this flawlessly by having names that share the words break and neck between them. This helps players easily recall what Human (or what Werewolf) is waiting on the other side of each card.

Unlike card names, flavor text is afforded much more freedom in terms of what its job is on any given card. Following the theory from above, regarding reading top to bottom and left to right, the flavor text of a card is the last thing a player will read when experiencing a card for the first time.

I like to refer to names and flavor text as the bookends of a card. The name is that first bookend, the sturdy rock that you prop all your books up against. Flavor text is the other bookend that is there to tie the shelf together and make sure nothing tips over or falls on the floor.

Werewolf flavor texts are interesting because they provide a rare opportunity to create pairs of text that set each other up, creating narratives that flow between two cards. Because of the random nature of a trading card game, a writer can never guarantee any two cards will be encountered in a set or determined order. This is the equivalent of attempting to write a book knowing that the page order will always be completely random.

Werewolves are different in that you are pretty much guaranteed of two cards that will be encountered in a predetermined order. This simple fact affords writers with two interesting possibilities not commonly experienced with normal Magic cards.

Village Messenger // Moonrise Intruder is one example of this, and it has something I refer to as a âsetup text.â

Village Messengerâs flavor text is setting you up for the punchline of the name Moonrise Intruder. The flavor text creates a seamless narrative between the two cards, creating an image of a messenger who brings bad news that a werewolf is stalking about the town, only to reveal that the messenger herself is the deadly beast. This type of flavor text is taking advantage of the fact that it knows exactly which card name from Shadows over Innistrad you are going to read next. We saw this trick used in the original Innistrad, and I was happy to see it return in Shadows.

Having two card faces also creates the opportunity to have continuous flavor text that runs across two different cards.

When done correctly, this creates âpage-turningâ tension, wherein the break in flavor falls at the moment the subject transforms from human to werewolf. For example, Hermit of the Natterknolls has a flavor text that ends midsentence, finishing on Lone Wolf of the Natterknolls. The complete flavor text is, âHe hates company, but heâll have you for lunch.â Splitting the line between two cards with two different pieces of art adds an additional layer to the narrative, painting the image of an old man who hates having company over that transforms into a ravenous beast that will eat you if youâre not careful.

The End of Bookends

Names and flavor text play a pivotal role in both setting up and closing out every Magic: The Gathering card. They work hard to establish the narrative delivered with every mechanic and help serve as a bridge that ties art to gameplay. Innistradâs Werewolves offer a unique look take on this by creating tension and additional moments of suspension and expectation. I hope you enjoyed this deep dive into what goes into writing the names and flavor text for Innistradâs Werewolves. Do you have a particular Werewolf that is your favorite from Shadows over Innistrad? Let me know in the comments below or on Twitter @AntTessitore.