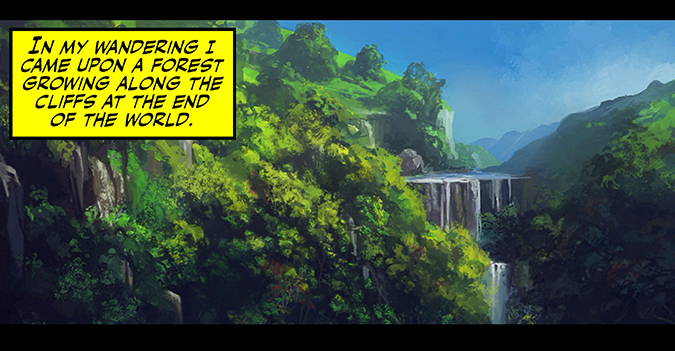 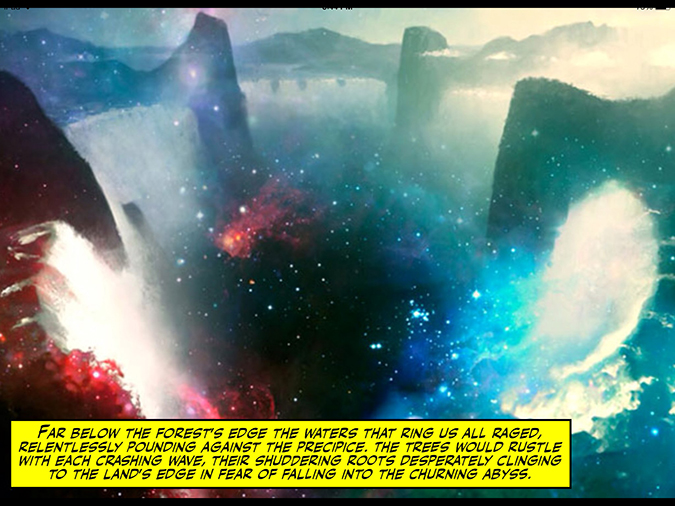 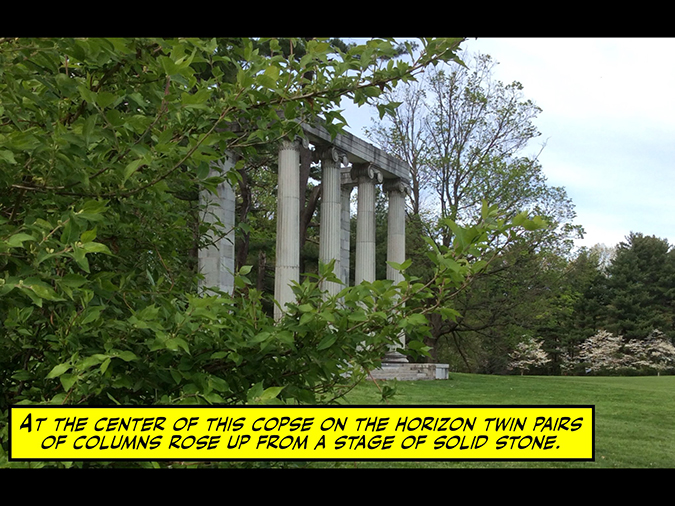 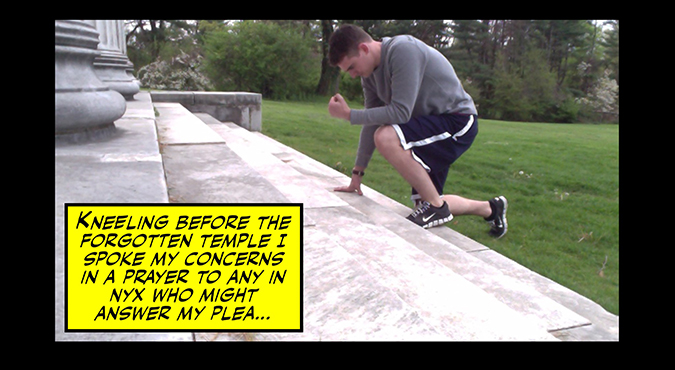 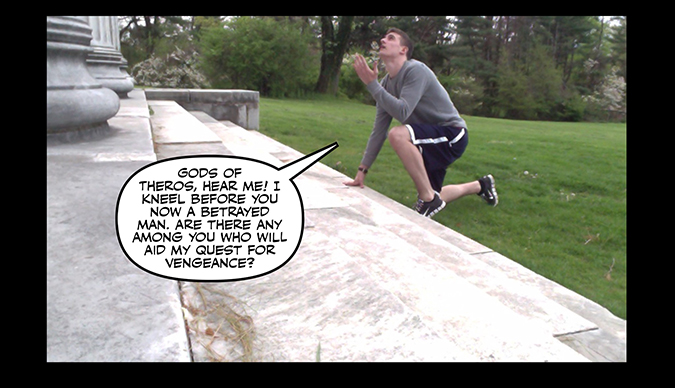 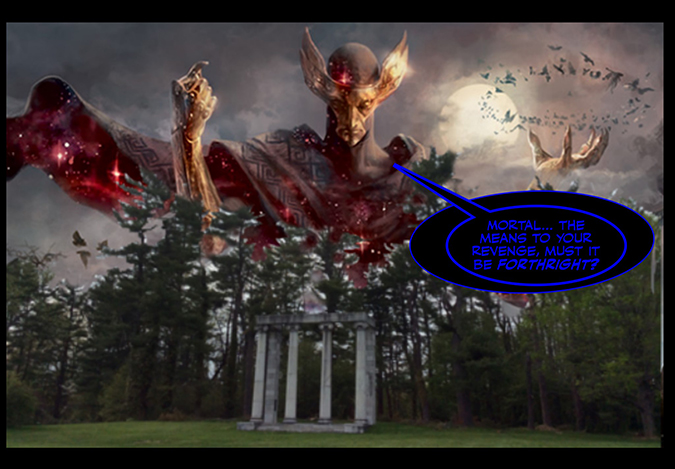 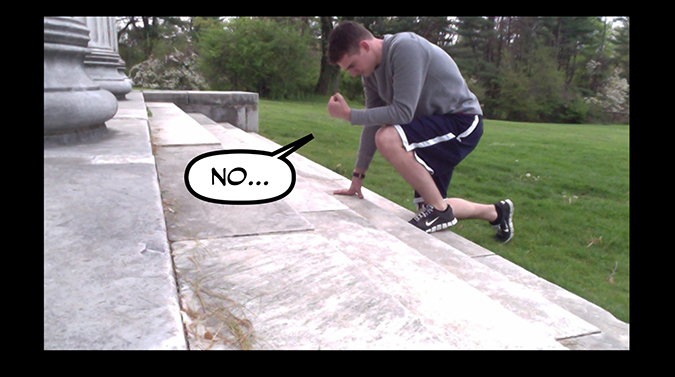 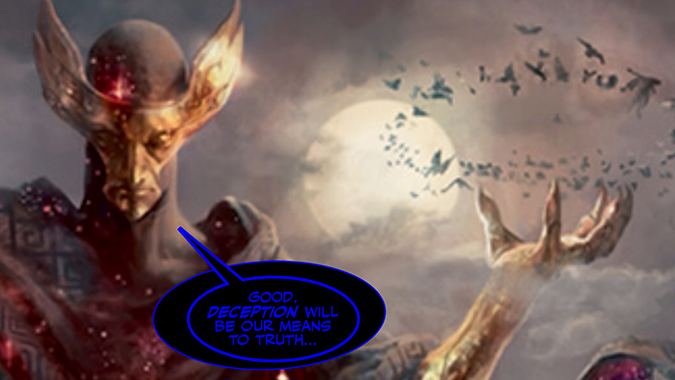 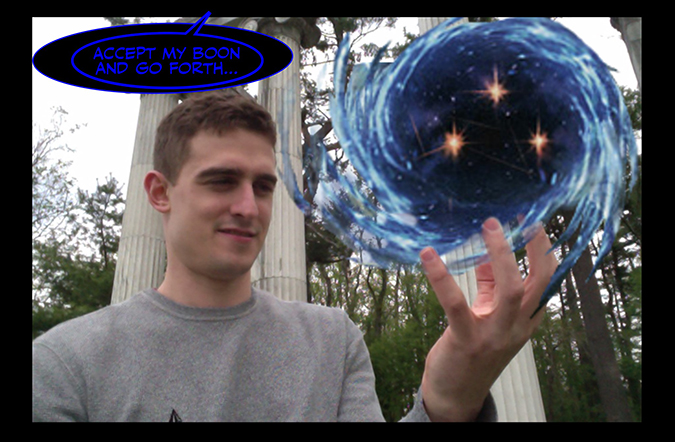 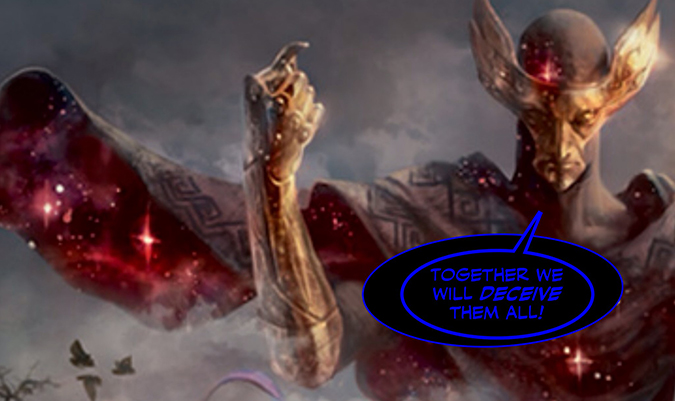 Deceived by a God

Back in Born of the Gods spoiler season, I was anxiously awaiting the God of Deceptionâs big reveal to the community. A fan of rogues, thieves, spies, and just about any blue and black cards in general, the legendary God of Deception sounded like the absolute perfect commander to me. 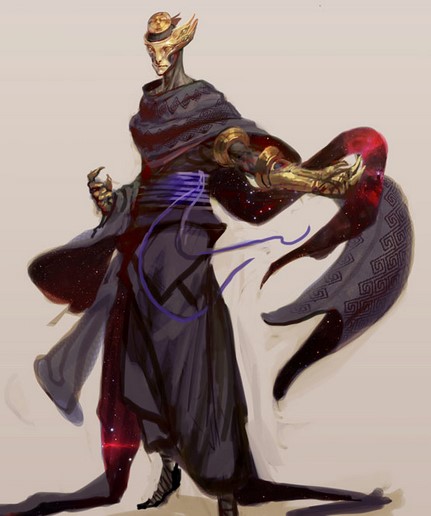 On my commute to work each morning, I used to wonder what Phenax would bring to the table. Would he be a modern riff on Illusionary Mask? Would he create an effect that gave all creatures in my hand a ninjutsu-like ability? Would he grant the option to play any creature in your hand as the card Clone for a set price? The possibilities seemed endless for a god with such an interesting title. Finally, the day I was waiting for was at hand, and the mighty Phenax was revealed to all what his role would be. To be completely honest, when I first laid eyes on the God of Deception, my initial reaction was:

âNot another mill effectâ.â.â.ââ I thought. âWhat a cop-out!â I would tell friends in disgust. To add insult to injury, I cracked a Phenax at my Born of the Gods prerelease along with a strong R/G pool. Needless to say, I felt betrayed by the God of Deception, and I let him drift to the bottom of my card box, never to see the light of day againâ.â.â.â

Recently, my younger brother has gotten into Magic, and I was talking to him about how sets today are designed to evoke feelings in their players. Specifically, I was showing him Innistrad and explaining to him how the mechanics were designed to create a feeling of horror and dread for your opponent. Impressed by that concept, he made the comment that I should build a deck that did that same thing. Knowing how much I like rogues and assassins and double agents, he suggested I build a deck that made my opponent constantly feel like as though he or she was being deceived.

I knew at that moment exactly who the commander of such a deck should be. Phenax deserved better than existence at the bottom of a pile of random cards. I would construct a deck that allowed me to charm, bluff, and trick my opponent in order to secure a deceptive victory. I would design a deck that would constantly leave my opponent wondering how he or she lost. I would design a deck worthy of being commanded by the God of Deception.

This deck has four major components that allow it to continuously bluff your way to victory. By correctly using your morph, ninjutsu, and unblockable creatures, and by combining them with a few milling effects, your opponents will struggle to correctly figure out your route to victory.

Morph for Your Money

A large portion of this deckâs creatures have the morph ability. Morph is inherently an excellent mechanic for bluffing and tricking your opponent because it creates additional hidden information for your opponent to worry about. When you attack with a face-down creature and have some mana available, your opponents will not know if you are bluffing with a Riptide Pilferer or if that seemingly innocuous 2/2 for 3 will become an Ebonblade Reaper.

Once you trick an opponent into allowing an unblocked Ebonblade Reaper slice off half his or her life total, that player will never look at a face-down 2/2 the same way again. The player might even start wasting his or her valuable removal spells on any face down 2/2 he or she can, a fact that you could use to your advantage when making your plays.

A second level of deception that morph offers this deck falls with the cardsâ mana costs. Phenax, the deckâs commander, is turned on by devotion. Morph creatures (when face down) offer no devotion toward the God of Deception. What they do offer is the constant threat that they could be flipped over at instant speed, suddenly bringing your enchantment creature down from Nyx in the form of an indestructible nightmare for your opponentsâ attacking creatures.

You can even swing with a face-down 2/2 only to morph that creature into a Raven Guild Master, bringing Phenaxâs devotion up to seven and suddenly switching your game plan from killing to milling.

Once your morph creatures have been turned face-up, a lot of the mystery and bluffing associated with them is lost. A face-up Ebonblade Reaper is far easier to play around than a face-down one. This is where our second group of creatures comes into play.

Ninjutsu allows you to swing with your face-up Riptide Pilferer, leaving up mana and the threat that your little Merfolk might actually be an Ink-Eyes, Servant of Oni lurking in your hand and waiting to strike. If your opponent wrongly calls your bluff and you do in fact have the Ink-Eyes, you can return your unblocked morph creature to your hand, allowing yourself to replay it face-down yet again to add to your opponent's confusion. Is the newly-played, face-down creature the same Merfolk returned by your Ninja or is it something moreâ.â.â.âdemonic? These are the questions your opponents will toil with while you slowly defeat them.

Your last group of creatures is a small fleet of shadowy unblockables that will enable you to ensure your Ninjas are able to get in and get the job done. These little creatures not only serve to help trigger your creaturesâ effects, but they also allow you to get maximum value out of any ciphers you decide to encode them with, running through the darkness, slowly generating an advantage. These little value engines will grow to be such a pain for your opponent that they will eventually distract from the larger threats hiding beneath a face down 2/2â.â.â.â

Your final route to victory in this deck is to simply mill your opponents out. There will be games in which your opponents are so distracted by everything else you are putting them through that they will not see how low on cards your Memory Erosion has them until itâs too late. Morph your attacking, face-down Raven Guild Master at the last minute to exile a surprise ten cards off an opponent's library, turning your God of Deception into a creature and allowing you to mill your opponent for an easy seven before flashing back an Increasing Confusion for the win.

The final piece of this Deceptive puzzle is a mind-melter:

âYou can summon a creature face down so opponent doesnât know what it is.â If that isnât the best way to start rules text for a card, I don't know what is. This old card has had a number of revisions made to its Oracle text over the years, with its current Oracle text listed as follows:

: You may choose a creature card in your hand whose mana cost could be paid by some amount of, or all of, the mana you spent on

. If you do, you may cast that card face down as a 2/2 creature spell without paying its mana cost. If the creature that spell becomes as it resolves has not been turned face up and would assign or deal damage, be dealt damage, or become tapped, instead it's turned face up and assigns or deals damage, is dealt damage, or becomes tapped. Activate this ability only any time you could cast a sorcery.

Letâs break this down and see just how it helps our deck:

: You may choose a creature card in your hand whose mana cost could be paid by some amount of, or all of, the mana you spent on

. If you do, you may cast that card face down as a 2/2 creature spell without paying its mana cost.

So letâs say you have a Skinthinner in hand. Normally, you could either cast it face-up for

. But it gets better:

If you cast Skinthinner face-down for its morph cost, you would have to pay another

in order to turn it over and gain its effect. With Illusionary Mask, you can cast it face-down at a discount and then turn it over for free, just by attacking!

Another interesting mechanism of the Mask is that you can overpay for your creatures. Have a 1/1 for

in your hand? Play it face-down for

Go Forth, and Deceive Them All

With this deck, every card will help you make your opponent feel as though he or she is being cheated out of a win. I hope my take on a deceptive deck will inspire you to create your own flavorful Commander lists. If it does, I want to hear about it! Send me your list at ANThroplasm909 at gmail dot com, and I may feature it in my next article. Join me next time, as I dive into a deck lead by two different commandersâat the same time.