Login
0 Item
Advanced Search
Sign In
Create Account
A few weeks back, I put out the call for an MTG app reviewer. Michael âThe Sporkâ Evans responded and, as an app developer with access to both iOS and Android devices, was clearly the most qualified . Weâve got plans to cover more than just mobile apps including online apps and more. Iâm excited; I hope you are too. â Trick

Salutations, Internet! Before we get started on the real content, we'll cover exactly who I am and where I'm looking to take this series of articles over the next few weeks. My name is Michael Evans, but most of the Central Florida Magic community knows me as "The Spork." I've been playing Magic off and on since 1994, and am part owner of Cloak and Dagger Comics, the most awesome comic shop in Daytona Beach. More important with regard to what we're talking about today, I have spent the last three years as a mobile app developer, and several more years on top of that as a Web application developer.

The popularity of smartphones has skyrocketed since the release of the iPhone and the proliferation of the Android platform, and this has definitely had an effect on the Magic community. Take a look around at the next event you attend, and you'll see players using their phones to check prices while trading, keep track of life totals in a game, or check Oracle readings on cards. My first few articles will be "app roundups," giving overviews of the best applications in specific categories for both iOS and Android. Today, we're going to start off with life counters.

When it comes to CCG-related applications, either on the App Store or Android Market, life counters are by far the most numerous. There's a lot of variance in the features of each different piece of software, and it's important that you pick one that fits what you're trying to do and who you're playing with. For serious tournaments, I would recommend sticking with a pencil and paper. Depending on the device you're using, life-counter applications can drain battery life quickly, and I've actually had my phone die in the middle of a Top 8 match. It's not a fun situation to be in, believe me. Most life counters also do not have a history of life changes, so judge calls can be a bit awkward if you and your opponent have a difference of opinion on who's at what life.

However, digital life counters shine in casual formats. They're great for multiplayer Commander games, or even just kitchen-table Magic. They save the play area from becoming cluttered with extra dice or scraps of paper, and can keep a game with several players running smoothly. In our Commander games, one player will often become the equivalent of the Banker from Monopoly. That particular player will use his phone to keep track of everyone's life and Commander damage, allowing everyone else to focus on the game at hand.

With that covered, let's get to the apps! 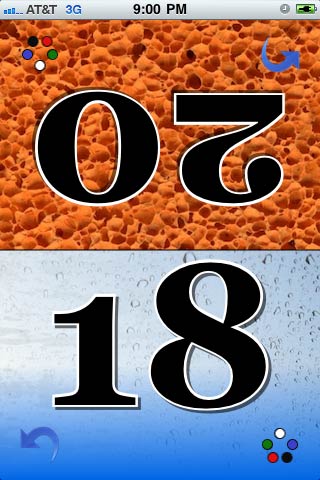 This was the first life counter that I ever used, and it's pretty basic. The main limitation of this app is that it has no way to keep track of poison or Commander damage. Honestly, it doesn't have any extra features that don't include changing the picture behind a player's life total to one of five included graphics. Either player tapping near the top or bottom of his current score changes life totals, and a quick tap of the blue arrow will reset that player's life to 20. Despite its simplicity, the app has a lot going for it. The layout is pretty unique, and allows each player to control his or her own life, as opposed to most apps, where one player has control over everyone's life total.

This makes life total perfect for a two-player game where multiple people are watching, and is a favorite of mine to use during FNM Top 8 matches. The displayed numbers are large enough that anyone watching the match can see, and leads to a lot fewer people interrupting to ask what life totals are at. Be careful, though. For some reason, the developer did not put in a function to save life totals on exit. If you take a phone call midmatch, both players will be at 20 again when you reopen the app. 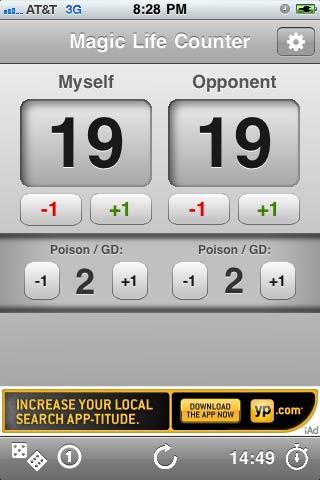 This is a popular app at my local game shop, and I've seen it used across multiple formats. The user interface is clean and easy to understand, and the software is packed full of features that include tracking alternate damage, a die roller, and round timer. While it only supports two players, I've seen MLC used for many a Commander game. Generally, one person with an iPhone or iPod Touch will pair up with someone who doesn't have one, keeping track of both players' life totals. So if there are six players in the commander game, a total of three devices would be needed.

Watch out for the ads located near the bottom menu bar. Most ad companies disallow ads placed in such a manner because of how easy it is to activate the ad when you meant to tap one of the program's buttons. In Magic Life Counter's case, this means you might be trying to flip a coin, but instead get booted out to a web view telling you how much money you can make working from home. Still, the app is one of the better free life trackers out there. 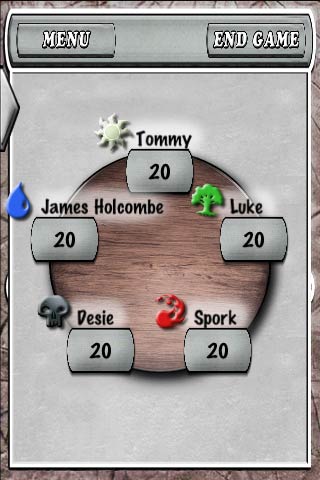 Now, this is a life counter! This is one of those apps that you can tell a lot of work went into. It's feature-rich, runs smoothly, and has slick-looking graphics. These are all signs of a quality mobile application. There are several different versions of Little Helper on the app store, so let me clear up the differences for those of you not familiar with iOS app-naming vernacular. Lite versions are generally free versions of software that don't have all the features of the paid versions. Developers release them so that customers can demo the app before deciding to buy the full version. Apps with the HD tag are made with higher-quality graphics and run natively on an iPad. In MLH's case, the HD version has some extra features and will run on your iPod Touch, iPhone, or iPad.

The Lite versions of this app don't include the ability to track poison counters or Commander damage, so if you're looking for that, you'll want to buy one of the paid versions. The upgrade cost is worth it, and one of the few Magic apps I've said that about. With the paid versions, you can have up to ten players tracked in one game, and the HD version will also let you keep a history of life changes. There are a ton of other features in this app, so be sure and at least check out the Lite version; I think you'll be impressed. 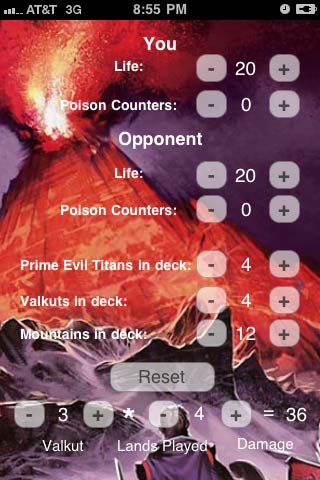 These are two interesting pieces of software I found while searching for apps to include in the article. Targeted toward specific decks, the applications not only keep a tally of life and poison totals, but also allow you to keep track of how many of a specific card are left in your deck. The Valakut version will even calculate how much damage is done given a certain number of Valakuts and Mountains entering the battlefield. Obviously not for everyone, but I know there are some die-hard Valakut players out there, and Pyromancer Ascension is seeing an upswing in popularity with the release of New Phyrexia and the creation of the PyroTwin deck. 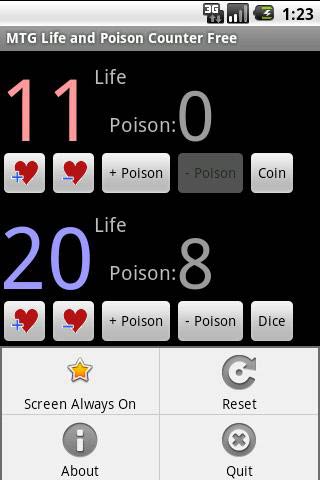 This is a really simple life counter, offering support for two players. It does have poison tracking, but not much else. Simlar to the iPhone LifeTotal app, MTG Life & Poison offers large, readable numbers useful for when you have a group of people watching your game.

While there are more feature-rich applications on the Market, this is still a solid piece of software. 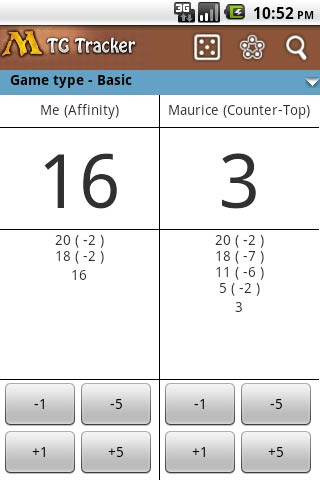 This is the most feature-rich Android life counter that I've used. The number of players tracked can be changed within the settings, but be careful. I tried to set the number of players to 100 on a Galaxy Captivate, and the phone decided that meant it needed to crash and reboot. Obviously, I doubt you will be playing in a hundred-player game, but it would have been nice if a maximum number was put in by the developers.

Honestly, this is the only minor flaw in an amazing application. It can track multiple players with life and poison totals, and keeps a history of life total changes. The die-roller has multiple options, and you can even roll a Planechase die. Tracker is also the only life-total software I've used that has a built-in card database. The database is accessed remotely, and so it's constantly updated with the newest sets. If you've got an Android device, this is the software you should be using.

That about covers it for this week. Next week, I'll be doing another app roundup that goes over the different card databases available for mobile devices. If there's an app you'd like to see me review, shoot an e-mail to spork at thehappywalrus dot com, or hit me up on Twitter: @The_Spork. I'm always looking for new and interesting apps to play with.