I've been a member of many teams in my life. I'm part of a faculty, I've been a student, played various high school athletics, and been on academic teams. I'm also married which is a two person team. In our EDH league I'm also a part of a team, team 'Lives in the Red Zone.' Our team was founded by Sheldon Menery (level 5 super judge), and includes myself, Brennan DeCandio and Todd "Jazzhands" Palmer. 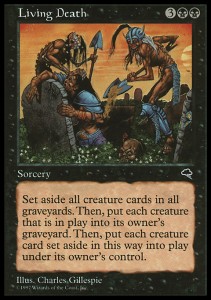 The tenets by which our team governs itself are simple and pure, 'live in the red zone.' If you have the opportunity to attack someone, you should. Brennan lives in the red zone with control decks, Sheldon usually casts Living Death and then crushes dreams and Todd favors letting his tokens shimmy their way through the red zone. I favor a different approach to the red zone, I like to let Progenitus thunder his way over (sometimes accompanied by other players creatures, thanks Bribery!)

That being said, I feel like I'm not quite living in the red zone as much as I could be, and this week we aim to change all that. I want to build the most battle themed deck I can! I want this whole deck to live in the red zone and just generally be angry! If a creature looks like it's ready to battle then it's got a home in this deck. On a side note, whenever I declare attackers I tend to say "battle." Give it a try once or twice and you'll see that it's pretty fun and really fits what you're doing.

We need to start with the appropriate general. Right away I'm thinking we need a five color creature. Though the zone is red we don't want to color discriminate! While I could just cheat and make Progenitus my general I think I want something a little different. According to my research there are exactly two legendary creatures with five colors and haste. The first one is Horde of Notions. While the Horde is a splashy beater there are probably a few people who are going to use him in their elemental decks and I don't want to snipe him for no reason. 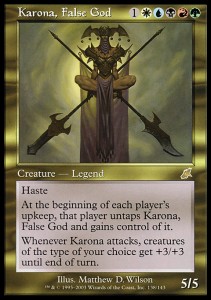 With Horde of Notions out of the way we fall to Karona, False God. Karona is meant for the red zone! Not only does Karona have haste, she spreads the love of the red zone around to everyone. Karona makes everyone want to live in the red zone, which is what our team is really all about. It's worth noting that Karona's current creature type is avatar, so if you want Karona to get the bonus for attacking that's what you need to name.

Now that we've found the right general, we need a suitable group of cards to charge into battle. I want to start with the most fun haste creature. Madrush Cyclops is an obvious choice. Madrush has artwork that reminds me of how all haste creatures should be: If you're going to run all the way to the fight, make sure you're good and angry when you get there!

Though we want this deck to be creature based there are some cards that will help us dominate the red zone that we just can't ignore. Fires of Yavimaya was dominating the red zone before EDH was the cool format to play! Sarkhan Vol also acts as a pseudo-fires while pumping the team to more volatile proportions, or just stealing someone to join in the raid!

We want to be slamming creatures into play and turning them sideways and I want to fill up the deck with every card I can find that helps get us to that end. Before I discuss anymore card choices let's throw the deck out there for everyone to discuss.

1 Master of the Wild Hunt

1 Call of the Wild

1 Survival of the Fittest

1 Defense of the Heart

1 Hall of the Bandit Lord

As you can see everything in the deck either turns creatures sideways, steals your opponents creatures to turn them sideways, or just resonates anger. This deck wants to live in the red zone and doesn't care what gets in the way! 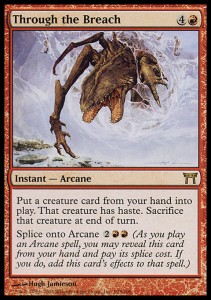 There are a few cards missing from the deck that I really would like to add but simply don't own. I think Through the Breach would be a fun addition, instant speed blockers (especially ones with persist) can be really fun. Additionally, Natural Order would be a great fun, if I could get my hands on one. I also feel like Progenitus has a place in this deck, if only because if he resolves the game pretty much ends.

And now a few quick rules items. Oran-Rief puts counters on all green creatures that have come into play that turn, meaning if you're not careful some of their creatures will get counters too. Also, positive and negative counters are removed as a state-based action, meaning that Woodfall Primus is pretty awesome with Oran-Rief!

For next week's article I'm working on a saucy little EDH number inspired by WotC's great April Fools joke from last year, Duel Decks: Pirates vs. Ninjas! I will hopefully be showcasing the Pirates version (since we all know that Pirates rule!)

Until next time I look forward to hearing from you all, this is Ben McDole giving you a hundred reasons to play Magic!