I got a sneak peek at Brandonâs preview card, Elderscale Wurm. That thing is freaking amazing! Itâs a 7/7 with trample for 7 and an awesome ability! While I know this is Brandonâs preview, I want to make one point before really getting into the meat of the article.

This is a 7/7. With trample. For 7 mana. And it does something that is useful in any deck. While Brandonâand my deck idea belowâare focusing on how this card fits into a variety of decks, when it comes down to it, this is the kind of card that is perfect for casual players. If you only have one copy of the card, you can throw it into any deck that runs green. The ability is great in any deck and doesnât need to be built around. A 7-mana 7/7 with trample is practically good enough all by itself. If you treat the rest of the text on the card as a bonus, you are still getting an amazing creature.

I know that Brandon is laying out all the fun and exciting ways to abuse this card, so I recommend you check out his article first. Go on.

When I first saw the card, I was impressed. Then, my mind clicked, and I saw only Form of the Dragon.

Most everyone who has stumbled across Form of the Dragon has said to themselves, âThis is cool,â and then looked at the 7-mana cost and moved on. Those are the normal people. Those are the people who value their time. In reality, any card that costs 7 mana better win you the game before your next turn. If it doesnât, you set it aside and move on. Instead, some of us try-hards have looked at the card and seen a challenge. Form of the Dragon excites my Vorthos like no other card. I want this card to work!

Most everyone who has tried to make the Form work has failed miserably. Iâve made several attempts and have seen, at best, only moderate success. It is a 7-mana enchantment that just doesnât do enough for 7 mana. 7 mana is where the game-changing cards hang outâElesh Norn and all her cool friends in their 7-Mana Club, whispering about what a loser Form of the Dragon is.

But not me. I love Form of the Dragon. We share a special relationship. I want to make it work in spite of its faults. I love it dearly; it spits in my face. I tell it how good we could be together; it laughs at my foolishness.

When New Phyrexia came out, I thought that the card I needed had come. Soul Conduit just seemed like a perfect fit! With Form of the Dragon out, when my life reset to 5, I could use Soul Conduit to switch life totals with an opponent. On my upkeep, Form of the Dragon would then breath 5 at that opponent, leaving him a charred husk, irrelevant of whatever his life total was before. It was elegant. It was beautiful. It was everything I hoped for. In theory.

Why does Practice take my beautiful Theory from me at the dance and kick the crap out of her in the back alley? I built the deck and even wrote about it. Iâll save you the clicking:

"R/W Form of the Dragon"

The end result was a couple of problems: 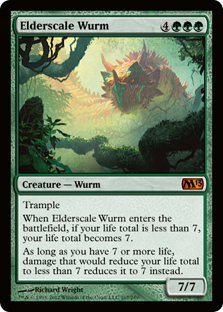 So, you can see my excitement about Elderscale Wurm! The Wurm can replace the Phyrexian Unlife! That by itself is nothing special. In fact, the Wurm isnât quite as good as the Unlife in keeping you alive. The Unlife is an enchantment and much harder for our group to kill. The real benefit of Elderscale Wurm is that it is green! I can shift the deck into a R/G mana-ramp theme so I can hit 7 mana on turn five or even sooner! White just canât offer the level of mana ramp that green can. While the Wurm might be easier for my group to kill, I donât see myself needing it to sit on the battlefield too long, so I should be fine. Sitting at 5 life wonât be a problem with the Wurm in play either!

Given that, letâs take a look at the rehashed R/G version of Form of the Dragon:

"R/G Form of the Dragon"

I think the Form of the Dragon and Soul Conduit are pretty self-explanatory, so we can skip them.

There are only two copies of the Elderscale Wurm not because it isnât important, but because I have four copies of Worldly Tutor. The Tutor will find the Wurm or any other creature I think I need right away. When I have a chance to play this deck, you can expect the numbers to change as things are streamlined. For now, two Wurms and four Worldly Tutors makes sense.

The mana-ramp package is probably excessive, but I want to be hitting a creature on turn one and another on turn two, or the Cultivate or Explosive Vegetation. When you are looking for land with either ramp spell, look for the Mountains. There is almost no way you arenât finding the three Forests in time, but the Mountains are another story.

I added the Skyshroud Elf because of the delicate mana base. With only four Mountains and the Birds of Paradise as sources of red mana in the deck, you were going to be very vulnerable if things didnât play out just so. Adding the Skyshroud Elf means you can funnel as much green mana through him so you are not so dependent on everything else. In spite of this, donât even think about chumping with a Birds until you have three Mountains in play. Your mana creatures are weak and easily removed, so take care throwing what may be an essential way to generate red mana in front of a 4/4 just to save you a few life points. You might consider adding some dual lands, but be sure you keep the Mountains in there, as your land searching is all basic land searching. I decided against dual lands for this deck because my group is starting to turn toward nonbasic land hate, so I laid off the duals in this one.

There will come a point in my metagame when I can stop running this card, but right now, there is an abundance of enchantments, artifacts, and lands that need killing, but not enough people are packing the hate. Once they start, I can lay off and let others do my dirty work. For now, it is up to me.

The Acidic Slimes are an absolutely essential part of the midgame as well. My little mana dorks are not going to discourage anyone from attacking me, but a 2/2 deathtouch encourages people to look for greener pastures. I am considering making room in the deck for a creature tutorâmostly to find this card.

I knew that I wanted Cavern of Souls in this deck to stop the Elderscale Wurm from being countered, so when I went looking for another big guy who could block or swing in on offense if needed, Wurmcoil Engine was an easy choice. The benefits of the Wurmcoil Engine are known far and wide. Scary defense and offense that sticks around even after mass destruction or targeted removal is not something to take lightly.

Take note: The Cavern of Souls will never tap for the red mana needed for the Form of the Dragon. When you look at the list of lands, you can pretty much view Cavern of Souls as a nonbasic Forest.

This is in there not to kill your opponents, but to kill their flyers. Once the Form of the Dragon is up and running, having a Hurricane handy is a nice thing. With the Elderscale Wurm, you will take no damage from the Hurricane, but your opponents and their creatures will suffer. Squall Line may be better in your metagame, but the raw brute force of a Hurricane is enough for my group.

You will need to take care when using Hurricane. Your Birds of Paradise are the most important creatures for you until you make it to three Mountains, so take care not to empty the skies too soon. You wonât want to use the Hurricane until you have Form of the Dragon in play, so relax and hold tight. Once the Form is on the battlefield, show your power over the forces of nature all you like.

Remember what I said about Theory and Practice? Obviously, this new version is a new Theory. I havenât played this deck out several times to work out the kinks. Iâm not even totally sure that this new layout is going to work. If youâre looking to try this out, treat the deck as a framework, and tailor it to your metagame. With some luck, Theory and Practice will get along, and Form of the Dragon will finally love me back.