When the Grand Prix schedule that included the end of last August was released many months ago, I circled the August 25â26 weekend. Grand Prix: Boston/Worcester would be my chance to finally get back to a GP! I hadn't been to a GP since GP: Boston almost ten years ago. Back then, the Grand Prix was actually in Boston, and a huge turnout was just over six hundred people. I went 1â2 back then and had a great time. It is easy to forget just how many people play Magic when your range of opponents includes only those you play around the kitchen table! The dealer tables lined an entire wall with their wares. Iâd never seen so many cards for sale by so many different people ever! The sheer size of the Grand Prix made it an event. I fully expected this prerelease to have over a thousand in attendance and to offer far more glitz and lights than the last one. This one would be unbelievable.

As a casual player, I don't travel to GPs. There seems little point to travel to a GP and pay an entry fee to play Magic when the Magic I really want to play comes to my house every week! However, I live in Newton, a suburb of Boston. I could drive to the tournament site in under forty-five minutes. While I wonât travel for hours to go to a GP, if the GP is going to be that close, there is no way I'm going to miss it! On top of that, I discovered that the format was Magic 2013 Sealed. Sealed formats are so very newb friendly! You donât need to spend money to put together a deck then practice with it and learn how to sideboard for the other decks likely to appear. Sealed deck means I just need to show up, register the cards Iâm given, and build a deck. Many casual players do this every three months at the prerelease. A format that asks me to build a deck with a set of basic cards seemed wonderful to my casual playerâs heart. While the competition would certainly be tougher than a prerelease, I had the basics down and wouldnât completely embarrass myself.

It would also be a chance to meet some of the Magic celebrities who would be attending. I looked forward to the chance to have some cards signed by various pros, artists, writers, and podcasters, while possibly getting in a few games of Commander as well!

So, how was my GP weekend? I spent it in Cleveland. My oldest child, Chloe, starts her sophomore year at college this year. With classes starting the Monday after the GP, the family planned to drive her to Case Western on the GP weekend, and there was no way either of those events could be changed.

Most of us have been on the student side of that trip. Your parents harass you for the entire weekend. They try to be cool about reminding you to drink responsibly, but they just sound like the out-of-touch teachers from middle school. They insist on having the awkward safe-sex talk even though they haven't had sex in fifteen years. They try to help you move in, but they just get in the way. The entire trip is just torture. All you want is for them to drive up to the dorm, drop your stuff, and leave so you can get back with your friends you haven't seen in months.

The parent side of the trip consists of driving hundreds of miles, spending ridiculous amounts of money on hotel rooms, travel expenses, and dorm-related things that were not brought from home. Most importantly, it means that I'm leaving my helpless, innocent daughter to stay on a campus loaded with brainless, testosterone-driven predators who are attending university only to maximize their chances of violating my innocent flower.

So, this #mtgdad missed a GP in his own backyard to perform one of many fatherly duties.

No bad-beat stories with friends.

I wouldn't change a thing. Kick butt this year, Chloe!

Having been in Boston for several years now, the playgroup has gone through many changes. My playgroup started several years ago with a few posters on bulletin boards in some local game stores, looking for people interested in multiplayer. It was probably not the best way to get a group started (and certainly not the most high-tech way to get a group started), but it proved to be effective. A small group of five formed and hung together for a couple of years. When three of them left to go to graduate school and faraway jobs, it appeared the group was about to die. We managed to add one player, and then another. As usually happens, one of those players only ever played twice, but she asked if her friend could join. This turned out to be Eric.

When Eric started out with us, he was an ideas guy whose decks just never seemed to come off the way he thought they would. He ran weak theme decks. His play style was best described as vengeful or frustrated. This gradually changed, and for a while now, Ericâs decks have been smooth-running, effective decks, as opposed to piles of good cards smashed together. His play style has become a more encompassed awareness. One thing that hadnât changed was that Eric has always been a treat to play with and against.

Eric and I also become friends. While most talk around the Magic table revolves around decks, cards, and other Magic-related topics, with Eric, the topics included the events of our lives beyond Magic cards. Moving, breakups, and general personal life squabbles were all part of the conversation.

The playgroup has seen significant turnover in the last few years, and Eric was the lone holdover who still played every week. Many players have come and gone in that time, most barely creating barely a ripple in the group. Others are remembered for crazy decks or explosive personalities. Some joined, discovered the group wasn't for them, and left. Others left when the group dynamic changed in ways they didn't like. In the end, like every playgroup, players have come, and players have gone.

This week was Eric's last game. His job in Boston ended suddenly, and life is bringing him to Virginia. While Eric wasn't one of the original players in the group, he was certainly the longest-lived regular. Other players have come and gone, but Eric is the first friend to leave. Best wishes with creating a new playgroup in Virginia, Eric! Your presence will be missed on more than just the Thursday-night games!

For my regular readers, you know that my youngest child Spencer plays Magic. Spencer's birthday just passed by, so I needed to come up with a present. Hmm, what to get? Yeah, yeah, Magic obviously, but what?

Spencer has a casual Commander deck that runs Olivia Voldaren leading several Vampires. This deck has been together for a while. He traded for most of the cards in the deck and then added a few cards from my collection to round things off.

Spencerâs deck is fairly straightforward. Play some smaller stuff to keep your opponents harassing others while you ramp up into the big creatures and spells in the deck. Spencer has been fairly lucky in bringing Olivia out early and then stealing other peopleâs mana dorks.

Spencer and I share the cards in our collections. I have dibs on the cards in my collection, but as long as I'm not using the cards he is looking for, he is free to run them in his decks. This makes giving him cards for his birthday a little tricky. Most singles that he would want are cards that I already have, and he could manage to trade to find what he wanted faster than I could pick it up and make it into a gift. I realized that pretty much the only cards he would never get to use would be my dual landsâthey are always in decks. Duals were also cards that he would never get for himself since they are well beyond his budget.

But is a Badlands all by itself really all that impressive to little boy? It is a single card with unimpressive art. Spencer knows what it costs, but would he prefer an entire box of cards instead? I would need to make the Badlands into something special. I would need to really up the wow factor. I would need to have it altered.

If you are talking alters, you are talking Eric Klug. I talked to Eric Klug months before Spencer's birthday and arranged for him to alter the Badlands. I'd seen him do other duals as Unglued lands, and I loved how they looked. I had shown those other alters to Spencer and knew he would love it. His Magic-playing friends would be blown away when they saw it hit the table out of his Vampire deck. This was the way to go.

After some hiccups (it turns out Iâm not the only one who wants Eric Klug to alter a card!), I saw an initial draft of the card, and soon after, it was complete and in the mail! The worst part was hiding it in the house for several weeks! It just seemed such a shame to have a beautiful card hidden away in a drawer where no one was playing with it! 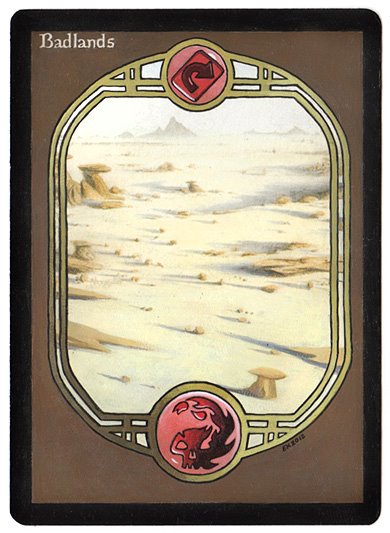 Spencer was completely blown away when he saw his present. A joy of being an #mtgdad is that you know the game and understand what your kids are talking about when it comes to Magic. Other parents buy packs of cards because they don't know anything about the game or they give you the card you ask for, but itâs at the cost of all the fun and surprise of a birthday gift. Sharing Magic with Spencer means that I understand the game, know how he plays, know what decks he has, and know exactly what he would love without ever having to ask him and spoil the surprise.

There are definitely ups and downs to being an #mtgdadâ.â.â.âwell, maybe mostly ups!