What would you do with six guild packs of Azorius and six guild packs of Golgari? Spencer and I decided to run Sealed decks using the packs! Itâs maybe not the best use of twelve sealed guild packs, but when you really want to just rip them open, running Sealed seems like the best!

Before we started, we knew these Sealed pools would be super-powered, so we decided right off that we wouldnât include any more than four of any nonbasic card. We were opening a bomb rare in every pack; running six of them just seemed insane! We talked about a sixty-card minimum, but we decided against itâpart of the fun was to get to play the overpowered decks, not to spread the crazy over sixty cards.

Spencer chose the Azorius packs and was soon overwhelmed by all the cards. With the entire color wheel spread over six packs, you are usually able to build something reasonably using just two colors and a splash of a third. If you take all the cards not in your primary two colors and replace them with cards in your colors, you will have an abundance of riches. Spencer also noticed significant repetition in the packs. Every pack has the promo card, but they also all had the appropriate Guildgate. In the six packs he opened, he had three or four copies of several commons.

All of the good cards led Spencer to go over the forty-card minimum. I strongly discouraged him from going over forty, but he argued that so many of the cards either were too good to exclude or were cards he really wanted to try out.

Fall of the Gavel â He used it once effectively, but the second time, it just demanded he leave too much mana open. Not surprisingly, it was something he would probably cut if he had it to do again.

Inaction Injunction â In spite of the ridiculous name, this was a star. Spencer regularly used this to cycle to the next card in the deck, and he treated the detain as a bonus to use on whatever was currently the biggest problem. I didnât agree with him putting so many cards in his deck, but these cards did good work thinning out his deck. 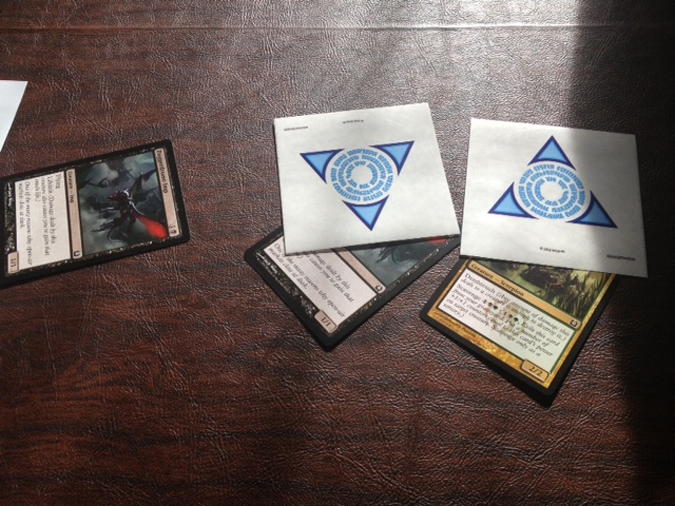 Azorius stickers make great detain markers on my Daggerdrome Imp and Sluiceway Scorpion. I really started to hate those stickers.

Martial Law â We were both convinced that when even one of these came into play, the game was going to be over. The ability to shut down a creature every turnâon top of every other way Spencer had to detainâmeant that I probably wouldnât have an effective attack for the rest of the game. Luckily for me, Spencer did not draw either one of them in any of the games we played.

Righteous Authority â I know that 5-mana Auras are bad. Generally, by the time you can play this card, you wonât have any cards in hand, so the benefit will be minimal. In spite of that, it was a good card for his deck. Spencer misplayed once, putting it on a 1/1 Bird token when he had only one card in hand, leaving it vulnerable to a Stab Wound, but the second time, it turned Skymark Roc into an 8/8 flyer that doubled his draw every turn. If you can make it stick through an attack and a draw step, I think you earned value for the 5 mana.

Soul Tithe â Barring a ridiculously cheap permanent, this card might as well tell you to sacrifice the targeted permanent on your next upkeep. I was never going to pay the mana cost for any card since I was trying to keep pressure on Spencer. This was removal in white.

By the way, Wizards, tithing involves paying 10%. Why do I have to pay for the entire permanent every turn?

Archon of the Triumvirate â This was the reason I chose a low mana curve when building my deck. I knew that once Spencer made it to 7 mana and the Archon hit the board, I might as well pack up, so I played for the short game. There was only one game in which Spencer had the card in hand and could cast it, but in that game, it was already too late.

Azorius Arrester â These guys were the all-stars in Spencerâs deck. They were always in play and constantly slowed my game down. Whether it was detaining a creature or blocking and killing one of my attackers, these guys constantly forced us into the midgame whether I wanted to or not.

Skymark Roc â This thing was a nightmare! I had a small scavenge theme in my deck, and this just shut that down. Almost every creature I had in my deck was vulnerable to being bounced by this thing, and my Stab Wound would not kill it.

I picked Golgari and decided that if I was going to have four Corpsejack Menaces available, I better build a scavenge deck. As I opened the packs, though, it became clear that my mana curve could top out at 4, so I was going to want a build that didnât want to wait around long enough to scavenge. I kept a few of the scavenge cards, but I tried to set it up so I could use all my mana every turn. Oh, and pulling two Jarad and a Lotleth Troll didnât hurt either. Check out the Gooooooooooooooooooooooooooooooooooooalgari guild special.

Giant Growth â This was a mistake; I should have run all four of them. So many times, I didnât know which of my creatures would get through, so trying to add counters at sorcery speed wasnât effective. Two more Giant Growths would have hurried things along even faster.

Golgari Keyrune â Iâm not sure if this was worth it. I never had a mana problem, so adding it for mana fixing didnât make sense, but the deathtouch creature gave me the great equalizer when dealing with ridiculously huge creatures attacking me.

Stab Wound â I put these in thinking Iâd treat them as direct damage to Spencerâs creatures. I figured that relying on them to do damage to someone playing white and blue was crazy. I expected him to just bounce his creatures to get rid of the Stab Wound. In actuality, they worked wonders. They killed off annoying blockers, and at one point, they were doing 4 damage per turn. As I expected, it didnât last, but they were more effective than most of my creatures that game.

Corpsejack Menace â I was thinking this with scavenge would be awesome. Then, I realized the depth of my card pool said that I wasnât going to be playing too many creatures with scavenge on them. The Menace only entered the battlefield once, and he was gone fairly quickly.

Daggerdrome Imp â I put these in expecting to need some defense from the Azorius flyers and hoping they would deal a couple of points of damage early. They were all-stars in the deck, working overtime in every game. I was never unhappy to draw one. At one point, I had three in play, and they did great work.

Deathrite Shaman â I had no doubts this would be good in multiplayer, and playing with it only confirms my suspicions. Eliminating cards from graveyards and giving you a benefit for doing it has worked out. Spencer often detained this guy just so I couldnât tap him at the end of the turn and generate a little benefit.

Dreg Mangler â This was an underperformer. He is only good if you play him right on the curve, and that never happened. Paying to scavenge him only ensured that the creature with the counters would beâat bestâdetained orâat worstâbounced.

Jarad, Golgari Lich Lord â He made it into play once and was detained. Iâm confident he is a good card, but Iâll have to wait for another day to see it in games.

Korozda Guildmage â When I put this card in the deck, I was thinking that this was a 2/2 for 2, but realistically, this really doesnât do much until you can activate the first ability twice in a turn. At that point, things start to become difficult for your opponents. I never really managed to make it to a point at which I wanted to use the 6 mana for this ability, but even the threat of it made determining blockers difficult.

Lotleth Troll â This guy did not live up to the hype, especially when I was playing against Azorius. Discarding creature cards is such an all-in-one-basket prospect, and itâs something white and blue are very capable of dealing with. I was unwilling to ever discard more than one creature card. Lotleth Troll can also be detained, so he is limiting. The real benefit is playing with a full grip of cards in hand, and then intentionally sending him into bad attacks. When you attack with him and your opponent has a 3/3, he is reluctant to block since he expects you to pump him up and kill his creature while yours survives. You may not have any creature cards in hand, but he doesnât know that.

Slitherhead â This was a waste. The card was essentially a difficult-to-get +1/+1 bonus that wasnât worth the trouble.

Sluiceway Scorpion â A 2/2 with deathtouch and an inexpensive scavenge cost worked nicely. Attacking or blocking showed the power of deathtouch.

Considering this was an alpha test, there are some significant changes I would make before trying this again. Six packs was far too many. We probably could have built very similar decks with only three packs each. If we have the chance to do this again, we will probably go that route. Sealed is supposed to be about playing some of the weaker cards, and that just didnât happen here.

Another alternative would be Pack Wars. Normally, that involves each person with a single pack of cards adding in fifteen lands (three of each basic type) and shuffling it up. With the guild packs, you could add four lands of each and do the same. The decks may be too small, but knowing you only have two colors in the packs reduces the luck factor that dominates Pack Wars.

Another change would be to make it a best of five. When one person has two wins, have the players switch guilds and build new decks. It is likely that some guilds will simply walk all over other guilds. This gives both players a chance to see what they can do with the same card pool. You can even compare builds afterward.

Now you just need to find some spare guild packs!