At such a crucial point in Zendikarâs battle for survival, itâd be easy to assume that every able Zendikari soul is fighting to save its world from the Eldrazi. Unfortunately, that is not the case.

Oddly enough, Ayliâs tale doesnât begin with cards. In the article âAlly Cuisine,â Doug Beyer indirectly explained her story when telling us of her brother Radrik, the Ondu Cleric:

A cleric of the kor wind-goddess Kamsa, Radrik entered his study of the goddess at an early age, along with his younger sister Ayli. The nomadic siblings became renowned for their wisdom and guidance for troubled souls, but the more insightful Ayli quickly outshined him. Disillusioned and envious, Radrik stopped traveling with his sister and joined up with an expedition to Jwar Isle, and ever since has offered his healing talents to adventurers.

She was more skilled than her older sibling Radrik, so he left out of jealousy. Ayli continued to live her life as a Kamsa cleric, devoted to studying and practicing worship of the old gods. Religious diligence and respect for kor traditions were both shown in her debut flavor texts Landbind Ritual and Eldrazi Monument. She believed the gods were not absent indefinitelyâthat âthe breath of the world,â Kamsa, could awaken once more. 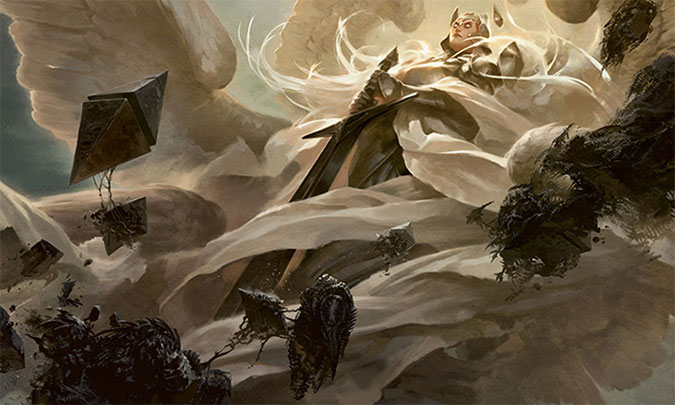 There is a gray area surrounding when exactly Ayliâs ideology shifts. Last Kiss and Curse of Wizardry show she had some semblance of moral direction and regard for Zendikar during the events of Rise of the Eldrazi, but straying words on Hand of Emrakul are praiseful of her awoken godâs true form. With her youth spent as a prodigy of spiritual counseling, had an ingrained devotion to Kamsa and the kor pantheon prevented Ayli from reaching the grim realization many others were quick to accept?

This is a case of the Precursor Worship trope.

Nahiri, the Lithomancer left a legacy for the Eldrazi when she mistakenly labeled them as âgodsâ in talks with the kor. Her words, in addition to countless temples, monuments, and exaggerated stories, created the perfect atmosphere for increasingly devoted followers to join in religious worship of the imprisoned titans. The merfolk and vampires of the plane followed suit, the latter even obstructing the hedron-network prison in attempts to free their god. Even now, with odds immeasurably stacked against Zendikari forces, the cultish Eternal Pilgrims remain loyal to their god Mangeni who is, in truth, Ulamog, the Ceaseless Hunger. 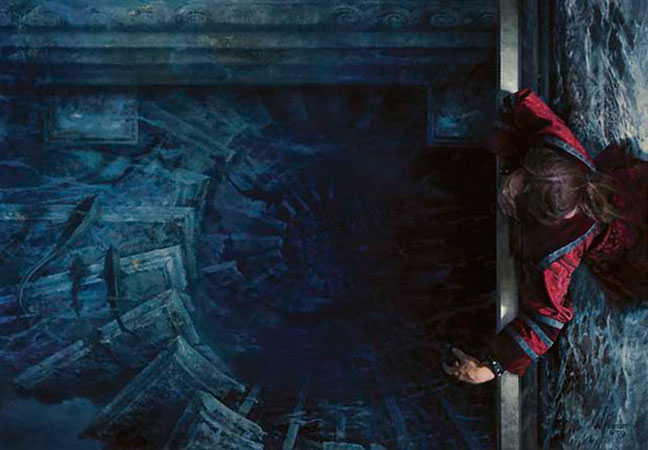 Unfortunately, the Eldrazi donât care. Shrine of the Forsaken Gods may make it easier for you to summon them in game, but the incomprehensible titans do not appear to spare lives on the basis of any worship or devotion. âThe Believersâ Pilgrimageâ tells us that Ayli recognizes this fact, as she quickly slaughtered Jaceâs hurda to feed the approaching Eldrazi. This act, as she explained, would delay any pursuit made by the brood. For everything that Ayli, Eternal Pilgrim can do, making sacrifices to prolong life with her first activated ability or feeding Eldrazi processors with the second, no number of offerings will satisfy Ulamogâs bottomless appetite.

The pleasant contrast of it all comes from Landbind Ritual. Certain that future generations of kor would continue to uphold the ancient traditions, Ayli once had great reverence for the land of Zendikar. Her curiosity and obsession spiraled out of control when the alien monstrosities behind the kor gods were revealed to the world. Now, as an Eternal Pilgrim, she aids in Ulamogâs destruction of those lands while proudly wearing symbolic Ulamog tusks near her chin. It was a change in stripes similar to what we saw with Kalitas, Bloodchief of Ghet, with her choosing to side with the Eldrazi, becoming a minor antagonist for the story in the process. 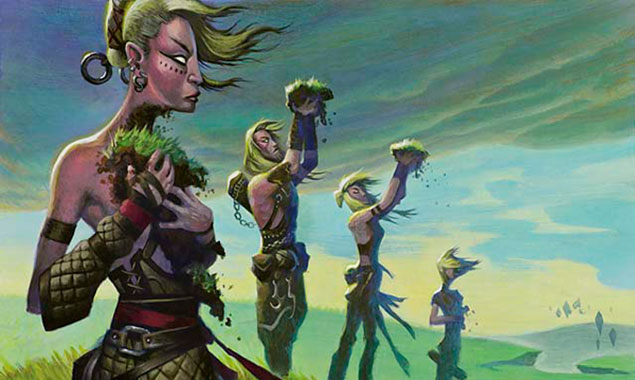 Their rallying cry, âWe shall forever roam!â perfectly embraces the spirit of Ulamog, a titan who will endlessly move from plane to plane, feeding across the Multiverse unless detained once more. For the Eternal Pilgrims, though, surviving to see Zendikar as a chalky husk of their idolâs corruption is the final goal. The Song of Devouring will end with their lives, a last offering to Mangeni before he departs the scoured plane.

But that wonât happen, right? Kozilekâs arrival certainly doesnât bode well for our Planeswalkers, but what do you think will unfold in the Oath of the Gatewatch story? Will Ayli and the other Eternal Pilgrim priests play a role in the fate of Zendikar? Write it in the comments, and until next time, happy planeswalking!