This year had quite the impact on Magic's story, and now it is finally time to look back and review some of the biggest highlights of 2019.

Where 2018 was largely defined by the change from internal authors to external contracted authors, 2019 was the year Magic moved the delivery of its main storyline from the Magic Story column to novels.

Magic's history with novels is best summed up by any number of forum threads from innocent newcomers seeking book suggestions: While diehard fans will religiously chime in to suggest The Brothers' War or Arena, each request is unanimously peppered with discouraging reviews of the franchise's multiple attempts at novel lines. The simple idea of a "Magic novel" is saddled with two decades of failed attempts at consistency, quality, and marketability.

A return to Magic novels presented a daunting hurdle, and an entirely optional one at that! Wizards had managed to steer clear of locking Magic's main storyline away in novels since 2013, when the Tarkir block story was published as free online fiction through the column Uncharted Realms. The New Era of storytelling was formally announced in June 2015 and for more or less the next three years the online Magic community thrived with free access to Magic's main storyline. The weekly online fiction established itself as an accessible topic of interest for creators of all kinds, and with a number of internal authors being active in story discussions on social media the community connections only grew stronger.

Magic's story had finally gained popular support and recognition as a result of its trusted stewardship, communication, and availability. So why fully abandon those advantages? Is it possible that the years of hard-earned confidence and progress had been misinterpreted as simply overwhelming support in "Magic story" as a broader idea? Regardless, the story continues to barrel down its new path.

War of the Spark: Ravnica

War of the Spark: Ravnica was a novel written by Greg Weisman and published on April 24, 2019. Expectations were reasonably high as the book represented the culmination of a multi-year story arc for Nicol Bolas and the Gatewatch. Unfortunately, initial reviews made it apparent that the book had failed in multiple respects. Between rushed pacing and an overcrowded roster lay revelation after revelation inundated with naked exposition dumps. The novel's intended dual-purpose as both a story finale and point of onboarding for Magic's new novel line hampered its ability to deliver fully on either. While the book may have not been worth the time and price many fans had paid, for the Franchise team the cost was higher: They not only fumbled their relatively fresh shot at a novel line but had also managed to reignite the countless concerns which plagued each previous attempt at Magic novels.

The Gathering Storm, Guilds of Ravnica, and Ravnica Allegiance

The Gathering Storm was a series of weekly email newsletter stories written by Django Wexler and published from June 5, 2019 to October 23, 2019. This 20-chapter prequel to War of the Spark: Ravnica was not restricted so much by purpose and quality as by inept scheduling and publishing. Starting over a month after the release of War of the Spark: Ravnica, The Gathering Storm detailed the main storyline events on the world during the two prior sets, Guilds of Ravnica and Ravnica Allegiance.

But Guilds of Ravnica and Ravnica Allegiance had each previously received five slice-of-life stories written by Nicky Drayden in the Magic Story column at the time of their respective set's release. While these ten installments were received very well, they represented a baffling break from Magic's main plot in a ramp up to the largest story event in nearly a decade. Wizards has never clarified why The Gathering Storm was not prepared and published alongside or in place of the Magic Story vignettes, but the impact of its absence and delayed release were unavoidable as War of the Spark: Ravnica began in medias res, referencing events which you could not have completely read for another six months.

For all that The Gathering Storm accomplished, it's hard not to imagine how many more people would have read all twenty chapters if the Franchise team had approached both the story itself and their Del Rey deals with adequate time and planning. Instead this newsletter series reads to most as a postmortem backstory, only able to be fully enjoyed long after any sense of relevance had fled the community consciousness.

The Wildered Quest was an e-novella written by Kate Elliot and published on September 4, 2019. As a much-appreciated palate cleanser, the most notable improvement for this Eldraine story was simply a release date prior to Eldraine set previews, seemingly in response to criticisms of the War of the Spark preview spoilings. The Wildered Quest exists as a solid example of a Magic novel done largely right.

What is worth noting, however, is that the novel's complete departure from what most would consider to be Magic's main cast and storyline does not exist in a vacuum. When combined with news of the Netflix animated show, the scattered status of the Gatewatch as of War of the Spark: Forsaken, and two more sets on worlds that have weak or no known ties to Gatewatch characters, a pattern of disconnect begins to shadow the future of the main cast and storyline as New Era fans recognized them. In lieu of a team that communicates with its readers while undertaking a multimedia approach that reserves characters, fans can only observe such potential shifts in storytelling direction as they emerge with time.

War of the Spark: Forsaken

War of the Spark: Forsaken was a novel written by Greg Weisman and published on November 5, 2019. Panned for both quality and content, Forsaken stood as an unfortunate high point of story discussion at the year's end. The book's most infamous passage was shared on social media the morning of release, spawning countless jokes and criticisms aimed at WotC's failure to adequately deliver on Chandra and Nissa's attraction and relationship. 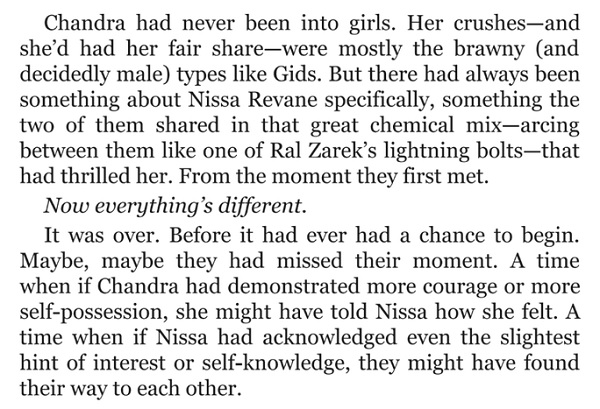 War of the Spark: Forsaken excerpt via Google Books 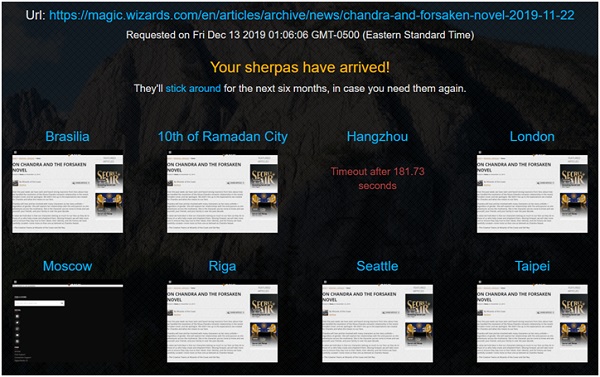 ...why isn't this accessible in China?

As the final novel installment for 2019, Forsaken ended the year on arguably the lowest point possible. Story fans saw something which they were excited for become the laughingstock of the Magic community. They saw an inexplicable reversal of a relationship that had finally been acknowledged in Ravnica, but only received an unaccountable "we'll do better next time" to answer for it.

Chandra is a four issue monthly comic series by Vita Ayala and published from December 12, 2018 to December 18, 2019. Originally slated for release from November 2018 to February 2019, the first three issues experienced enough delays to bring an early end to Magic's triumphant return in the world of comics. The sequel series Chandra: Trials of Alara was scheduled for release in August 2019 but was quietly cancelled on September 21, 2019. Whether Tibalt ultimately succeeds or fails in his torment of Chandra, it's unfortunate that his debut story will only ever match the reputation of his debut card.

It seems obvious that a fantasy game IP who wants to legitimize their story through the debut of a new novel line may want to utilize the character and world profiles on their own website to help facilitate onboarding of newer fans. Even ignoring the fact that it shows commitment to providing updated resources to your audience, it should at the very least not act as a grim archive displaying your inability to do so for a full decade. But alas, Nicol Bolas still seeks to harvest the power of the Maelstrom as told through Alara Unbroken in May 2009.

Teyo Verada, a main character in their two most recent paper novel releases, does not have a profile on the site. The twin duo of Rowan and Will Kenrith retain the same two-line biography that was provided during Battlebond in 2018. Oko? In his own MTG Arena words, "I grace you with my lack of presence."

Nobody is under the assumption that these are the Mothership's glory days. Its time as a community hub is long past and outside of Banned and Restricted announcements most seem hard pressed to remember that it exists. While the story section alone won't be the site's salvation, a list of story appearances on each Planeswalker profile could help people backread their favorite characters. Even brief and frequently updated summaries could keep up the facade that fan favorites like Davriel and The Wanderer are characters worth their time profiling.

With no public facing internal staff and a weeklong delay in addressing a major controversy it's difficult to feel like the Franchise team has a pulse. Among what little communication we had seen from the team earlier this year was a "buy it and see" baiting reply to a question of Chandra and Nissa's relationship. The surgical precision of their Forsaken statement leaves no stated remedy for their current and future actions, only an unaccountable promise to do better next time.

When asked if Chandra and Nissa were in a relationship the question was passed from Mark to the brand manager to the Head of Story and the eventual answer was "read the next book"... ???

Following the minor chaos that ensued in 2018 from Dominaria's story as well as unsavory past writing by head of story Nic Kelman, it would make sense for there to be an effort to start 2019 on stronger footing. Instead, the Franchise team's radio silence only amplified the collective astonishment over Forsaken and Ravnica being their foundational entries to kick off another paper Magic novel line.

A lesson I'm not alone in taking away from this year is that the disorganization and inconsistency of Magic's ongoing story has certainly dampened any mood it previously had in the community. Perhaps next year will restore some amount of order to the story, and with it goodwill which had been lost in 2018, but until then.