When new cards hit, I start brewing. Why read more of my words when you can browse a decklist instead? Like a picture, decklists are worth a thousand words. Here are lists I have brewed up based on the Godzilla alt-art cards we have seen so far.

And in case you need my opinion, I find the Godzilla alt-art tie-in to be awesome. 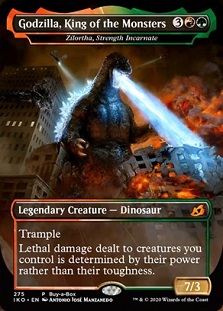 The big guy, the Buy-a-Box promotion, the radioactive lizard himself. Zilortha, Strength Incarnate rewards you for playing low toughness, high power creatures, and it is a creature-type Dinosaur. Just when you thought they were extinct...

I have to level with you all; I don't think the Buy-a-Box promotion is busted this time. This is a Standard format where every creature has haste and Teferi, Time Raveler bounces stuff. I don't think this will be a "good" deck, but it will be a fun way to show off Godzilla to your friends when local events return. 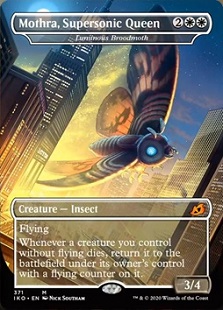 Luminous Broodmoth is a big step up from Nightmare Shepherd's triggered ability, and it provides power and card advantage to White decks which has been lacking until recently. How do we best abuse this ability?

Luminous Broodmoth and Woe Strider are going to be best friends. Other sacrifice options like Witch's Oven exist, but they ask too much of a deck-building cost for me this early in the format. I want to spread my big mothra wings and try something new. You can read all about Fiend Artisan here, it was CoolStuffInc's preview card. I will use Fiend Artisan's ability to make sure I always have a Luminous Broodmoth on the battlefield, and Skull Prophet will help fill the graveyard while also providing mana for the ability. Nethroi, Apex of Death brings an army back from the graveyard. Maybe Cavalier of Night should be Elspeth Conquers Death, but I wanted more creature density in the deck for a number of reasons (Viven, Fiend Artisan, Death's Oasis) and in best-of-one Cavalier of Night is a killer against Mono-Red. 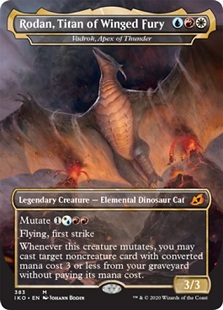 Rodan, aka Vadrok, Apex of Thunder, is a very interesting card. It needs creatures to mutate onto if you want to use the ability, but it casts cheap noncreature cards from the graveyard. The body is perfectly reasonable for three mana in most formats, but everything in current Standard either draws a card or has haste so I doubt a three mana 3/3 flying first striker will cut it. Getting back Teferi, Time Raveler seems automatic. Cards like Bonecrusher Giant seem awkward. On one hand, we can mutate onto that. On the other hand, Stomp doesn't go to the graveyard to be a target for Rodan's ability. Let's see what we can brew up.

This is a weird Jeskai Tempo pile trying out a lot of new cards. Finding bodies to Mutate onto will be interesting in Standard, as most creatures that produce real value are pricey. Resilient cards like Phoenix of Ash are interesting, but Escape doesn't work well with Vadrok's ability, so be careful. Sprite Dragon has haste and gets stronger when cast noncreature spells, but is it better than Lightning Stormkin? Staggering Insight is a nice curve-ball and it could take the deck in a different direction entirely since it can be recast with Vadrok and it triggers Sprite Dragon. Lutri, the Spell Chaser asks you to play more instants and sorceries, and I am excited to try out the Otter Elemental. Callous Dismissal is an interesting option because it is a sorcery you can recast with Vadrok and it creates an Amass token that you can Mutate onto. Is that better than Brazen Borrower? I am not sure, as creatures with Flash can make good mutate targets since they must be dealt with at Instant speed and Teferi, Time Raveler exists. 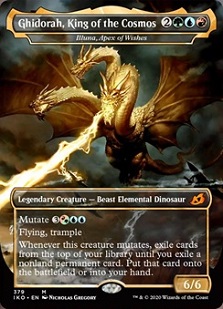 King Ghidorah, aka Illuna, Apex of Wishes, is a spicy one. The elemental creature type gives it a natural home, while a Mutate ability that draws cards and can place them directly onto the battlefield incentivizes you strongly to play more cards with Mutate. Can I trigger Risen Reef and Mutate at the same time? It sounds so nice!

I haven't seen enough solid Mutate creatures to make me lean into Pollywog Symbiote. I am sure more will be revealed, but for now I am going hard on Elemental tribal. I love the idea of Illuna, Apex of Wishes helping get Agent of Treachery and Thassa, Deep-Dwelling together. Spark Double is almost certainly extra, but extra fun is great at the start of a format. The planeswalkers all play well with Elementals and they can be great Illuna hits. 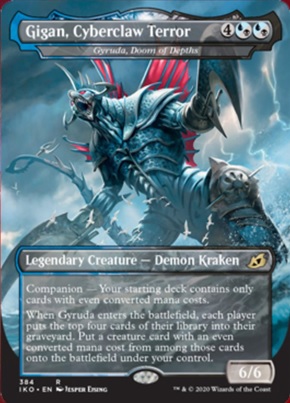 I like the idea of Spark Double and Thassa, Deep-Dwelling to keep the chain going, but I am not sure how all-in to dive on that. Polukranos, Unchained is a good way to make use of the graveyard, and it is a nice hit off of Gyruda's trigger. You don't want to come out with only a Paradise Druid. Extinction Event is a recently spoiled card that lets the controller choose odd or even and exiles all creatures of that casting cost. This card seems perfect for this deck as we can name "odd" and only hit our opponent's creatures. Hydroid Krasis has an even converted cost, but it plays poorly with Gyruda. Maybe we should still play the beloved jellyfish hydra beast, but I want to give Gigan a chance.

I love this Godzilla tie-in in Ikoria: Lair of Behemoths and I can't wait to build decks around all of my favorite movie monsters. Come back for more brews next week.