Have you ever wanted to make your Giant Shark a playable card? Do you think a sudden invasion of Slivers would make your Draft more interesting? Do you want to rename Bonesplitter to Axe Body Spray, cast it for free, and then equip it to Cynthia Fogbankington? If so, Cube: Legacy is for you.

After we had just finished drafting my Horror Cube (my first Cube project), a few of us playing started to discuss other ways to keep a Cube interesting. Somehow, we arrived on the idea of stealing from Risk: Legacy, a game all of us enjoyed, in which the game evolves as you play it by adding new rules and new options and by altering the very cards and board used to play it. 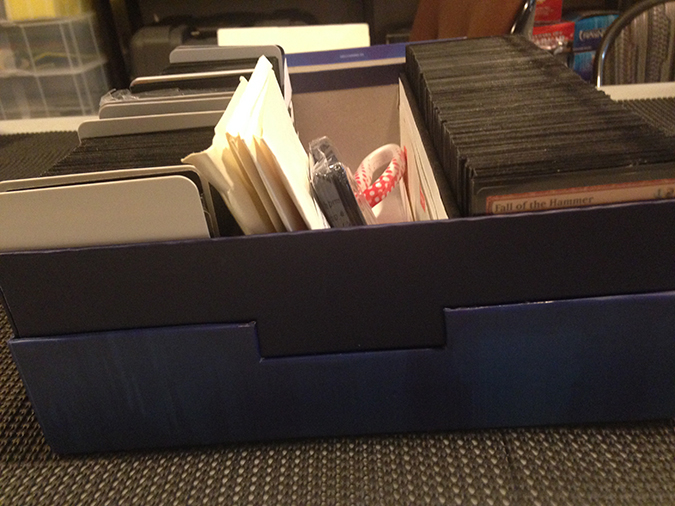 The full cube: Cube cards on the right; lands, tokens, and sleeves on the left; and the middle with packets, scissors, blank stickers, markers, etc.

I thought this was a great idea, and Iâm always looking for new uses for my excess cards that Iâll never use, so I started to develop the Magic Cube: Legacy project (not to be confused with cards from the Legacy format, though I guess thatâs technically true of this Cube, too).

I assembled and refined the basic rules. The main elements I wanted to emphasize were: 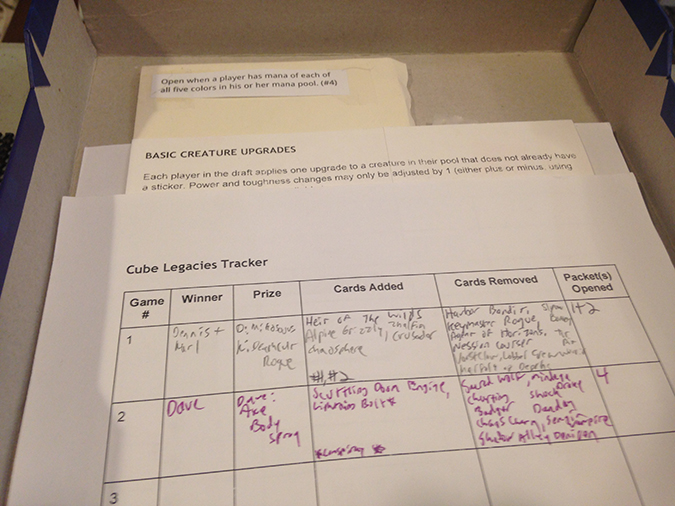 Inside the Cube box, we have our tracker with two games completed, the basic creature upgrades sheet (with several entries already cut out), and the packet we opened last game.

I set to work laying out the ground rules, and I assembled a card list. I put together a three-hundred-card Pauper Cube from cards that I wouldnât miss if they were stickered over, and they provided a decent enough drafting experience for the first game. I began to type up a set of unlockable packets. I even came up with a new plane on which this Cube took place for flavor-text purposes of the packets: the completely inventive plane named Legacia.

Then, I discovered that we werenât the first to come up with the idea. I compared that article with the way I was putting mine together, and I made some tweaks based on their experiences. Itâs worth reading both if you want some additional ways to make your own. The biggest difference is that in my Cube, we stickered the cards directly: no double-sleeving for us! 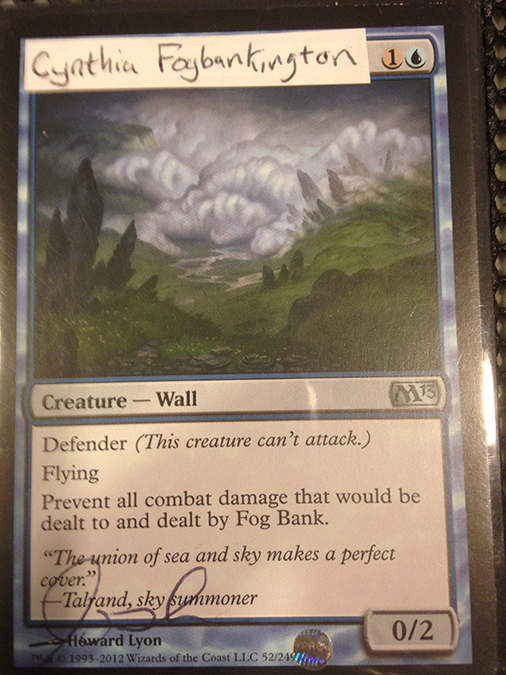 One of our first and most famous modified cards, the powerful Cynthia Fogbankington, who can be cast by Josh for just

to play in a match against Josh, and it costs the standard

After that, and after a few Drafts of the new Cube, Iâm presenting everything you need to make your own Cube: Legacy for your group. Below are the rules, files needed, and ten sample unlockable packets, though you are encouraged to come up with your own.

I also recommend using CubeTutor to track your Cubeâs composition, even if it wonât display all the changes made to the cards. You can follow along with my Cube there, though there may be spoilers if you plan on using my unlockable packets.

Start with a basic, Pauper Cube of cards you wonât miss. (My initial list is available if you want a starting point.) I recommend three hundred sixty cards, with a majority creatures, such as including forty creatures and twenty spells in each color and sixty miscellaneous multicolored cards, artifacts, and lands. Keep the cards relatively simple, and make sure you have a decent number of vanilla and French vanilla creatures.

Print out the basic rules, tracker, and creature upgrades. Also, have a way to sticker over cards. I recommend printing out the upgrades on sticker paper and leaving the rest of the excess sticker paper around with scissors and a marker.

Whoever owns the Cube should assemble all the unlockable packets with the text on how to unlock them on the outside. I recommend you shoot for conditions for unlocking one or two packets in each Draft, but no more than that. I put my packets into envelopes cut in half and taped shut.

Bring four to eight players together, and start the first Draft. 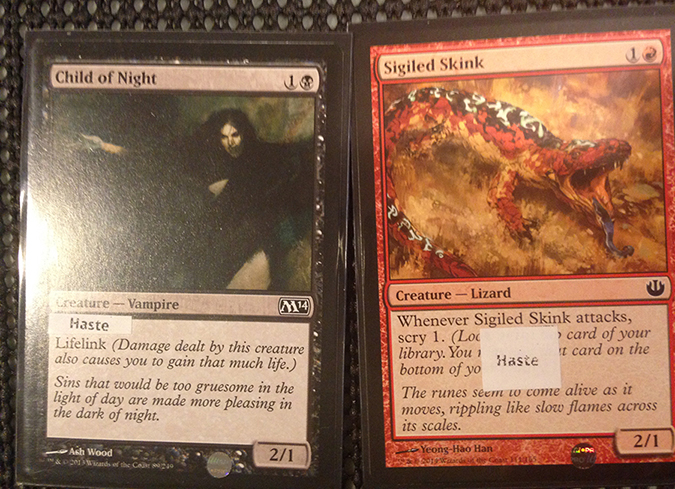 After our first tournament, the stickers to add haste were the most popularâ.â.â.â 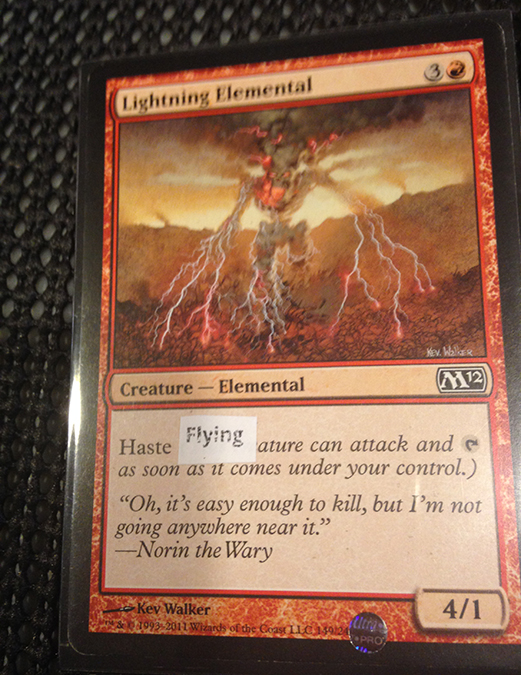 â.â.â.âBut in some cases, that was already covered, so another upgrade seemed more appropriate. 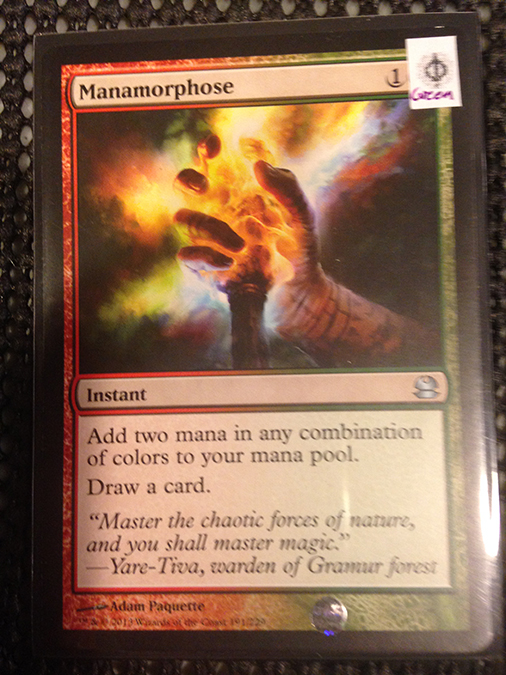 A new upgrade from one of the unlocked packets. Anyone want to draft storm?

Take all the Tournament End benefits. Then, choose one card in your card pool and set it aside. You add that card to your card pool automatically in future Drafts you play. There is a maximum of five cards you can keep at a time, though you may replace existing cards. You may claim stickered cards this way. 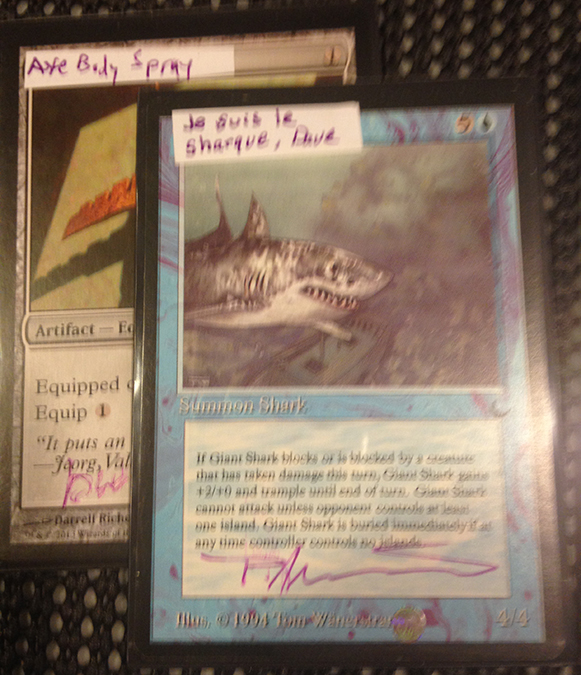 After ten tournaments, the Cube is locked, and no more changes are made. Whoever has won the most tournaments wins the Cubeâor you can just keep replaying it over as much as you like. 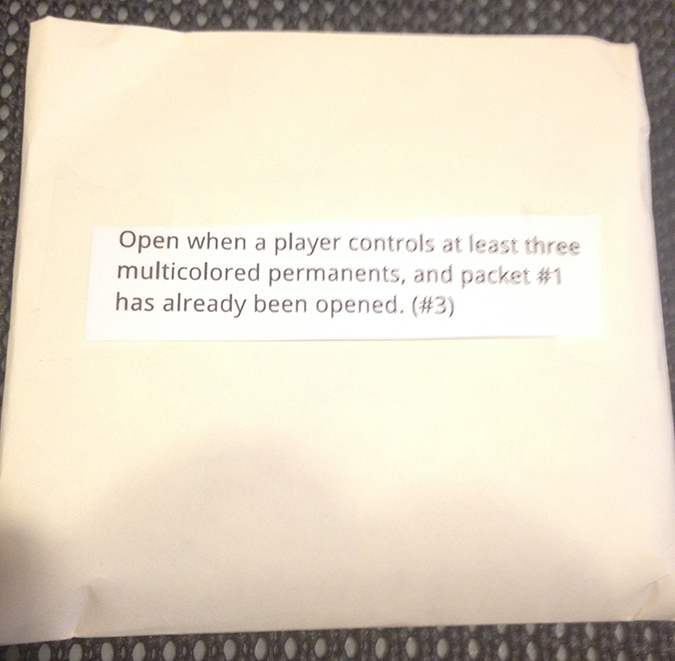 An unopened packet, full of cards. Who will unlock the next stage of the cube's evolution?