I'm a Star Trek fan. Big, big fan. I watch it with aggressive, potentially concerning regularity. I know entire episodes by heart. Whenever I finally manage to visit San Francisco for the first time, my inaugural stop will be in Golden Gate Park where Kirk told everyone to remember where they parked the cloaked Bird of Prey.

September 8th has come to be celebrated as Star Trek Day, because the original series premiered on September 8th, 1966. And while I and many others celebrate this... holiday?... we're reaching the apex of spoiler season for Zendikar Rising. What do these have to do with each other, you ask?

The answer is deep inside my Trekkie brain.

On Trek, groups of officers typically beam down to planets or stations in groups called Away Teams. Each member of an Away Team is selected based on the skills needed for the task at hand - whenever there was a medical mystery, Captain Picard always had Dr. Crusher at his side, whereas Worf would come when there were security concerns; likewise, if Geordi La Forge's expertise was not required, he'd stay on the Enterprise and tend to the warp core. Data always came along because he was good at everything.

Does this whole idea remind you of anything?

Yep. Zendikar Rising is giving us Away Teams in the form of the Party mechanic.

Now before you rip my head off, yes I know this is borrowed from Dungeons & Dragons and Star Trek likely had nothing to do with it. I get that.

But the similarities are there in plain sight. So much so that in my boredom a couple of years back I spent hours creating a batch of Trek Magic cards that included something like an Away Team mechanic. 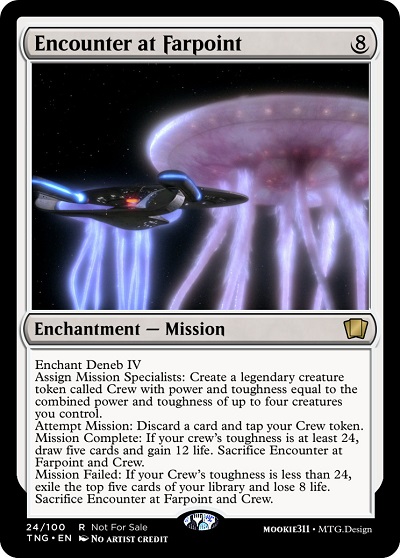 (Look, I don't expect Wizards of the Coast to be calling me for a designer job anytime soon. It's a fun way to kill time.)

Since Star Trek is always about completing missions - as was Decipher's long-dead Star Trek Customizable Card Game - I aimed to bring that feel into my project. We accomplish that by having missions on enchantments, each with unique thresholds that determine whether you reap the rewards of success or suffer the punishment of failure. In order to attempt a mission we need a crew - so we choose a handful of our creatures, tap them, and create a Crew token to represent them. In the process, however, both I and my opponents can cast spells. I can use instants that buff my crew, while opponents have special instants called dilemmas - stolen straight from STCCG - that make it more difficult for me to solve the mission.

Given this flavor, naturally I was intrigued when I saw the Party mechanic in Zendikar Rising. While Magic has yet to incorporate anything resembling the missions of my Trek mashup, we're already seeing plenty of cards that reward us for having a full and robust party.

Admittedly, I'm not a D&D player, so Party doesn't speak to me on an emotional or nostalgic level, nor will next year's D&D crossover set. But the idea of Parties is assuredly intriguing.

For one thing, it feels tailor-made for Commander, a singleton format in which we often have lots of unique creatures on our battlefields at any given time. It won't be terribly difficult to assemble a full party, especially with the help of cards like Veteran Adventurer that can fill any of the four slots. I also like that the mechanic involves two of the most popular and ubiquitous creature types in Wizards and Warriors, along with two that aren't quite so prevalent in Rogues and Clerics.

The mechanic also organically scratches another big Commander itch of mine - the idea that each game (hopefully) tells us a unique story that ebbs and flows over the course of the turns. As I've established quite strongly these past six months, I'm the kind of Commander player who much prefers to walk away from the table having had a memorable, enjoyable experience regardless of who wins to a turn three infinite combo.

It's too early to tell just how much Commander players will embrace this mechanic; I imagine we'll see a lot of experimentation when Zendikar Rising first emerges into the wild, but will it stick? I don't know. It's always difficult to gauge how much a new mechanic will embed itself into the format, especially when it's limited to a single set (for now). I'd be shocked if it doesn't make a strong return in the D&D set, but that's a full year off. I could very easily see Party being a mechanic that makes a big splash early and then recedes only to come back in force once it has more cards to support it in the future.

Speaking of the future - there's work to be done in the 24th Century. Let's assemble our Away Team.

Every Away Team needs a leader. We'll assume Captain Sisko (I'm a Deep Space Nine guy until the very end) is busy making log entries or hanging out with the Prophets in the wormhole and Worf is, I don't know, beating up holograms with a bat'leth so for this mission, Zagras, Thief of Heartbeats is going to lead our Away Team.

I do love me a good keyword soup, and even more so while we're working in the Trek analogy. In the old card game, each personnel (STCCG's terminology for creatures) had skills - Diplomacy, Computer Skill, Honor and so on. Unlike Magic's keywords these skills rarely came with abilities unto themselves; they became relevant when players attempted missions and faced dilemmas. Luckily for us, "skills" like haste, deathtouch and flying very much have inherently powerful and valuable abilities in Magic, and those three are among the very best to have in Commander. And, fine Away Team leader that he is, Zagras grants deathtouch to the rest of our creatures. What a guy.

He also gets cheaper if we have a Party. While he can himself fill the Rogue slot, it's ideal to have a full Party without him so we can get him out for just

. That cost reduction incentive super helpful the first time you cast him and only gets better if we need to cast him again and again.

Because we want to have and keep a full Party as much as possible, we're very creature heavy in this deck. Black and Red are great colors for Rogues, Clerics and Warriors, but Wizards are a bit tougher; many of Red's wizards care about instants and sorceries and that's not what we're doing here. To give us some versatility we've included things like Birthing Boughs to fill Party slots on demand, and Flames of Velis Vel can help us temporarily complete a Party to get the benefits of Zagras's cost reduction or the other Party-related Zendikar Rising creatures in the deck.

The really nice thing about this deck is that it can be very budget-friendly. None of the cards over $10 are integral to the deck and can be easily swapped out for less expensive alternatives.

Playing the deck is pretty straightforward, just the way we like it. We're gonna play lots of creatures and make them work for us through combat, sacrifice and a combination of the two. There's no one-card win condition; every game will play out differently, just like any good Away mission.

So, while it may be too soon to tell how big of an impact Party has on Commander, I'm gonna enjoy playing around with it and creating my own Star Trek experience in the Magic multiverse.