Login
0 Item
Advanced Search
Sign In
Create Account
Of all the formats of Magic I play, Team Sealed is undoubtedly my favorite. I relish the thrill of opening my first pack in a Draft, the satisfaction of making a good metagame call for a Standard tournament, the challenge of mastering a Modern or Legacy deckâbut Team Sealed allows me to spend the most time doing the thing I love most in the world: exchanging good ideas with others. Plus, the only thing better than winning a Magic tournament is a winning a Magic tournament with two of your closest friends. (And if you donât win, thereâs always a consolatory dinner with two of your closest friends.)

Most importantly, however, youâll want your teammates to be willing to outline and participate in a rigorous training regimen with you. Local shops rarely if ever run Team Sealed events, and you canât grind the format on Magic Online, so youâll need to do most of the preparation and research yourselves. Youâll probably need to meet with your teammates several times in the weeks leading up to the Grand Prix to discuss the format, practice building pools, and get some games in. Here are some methods that worked for my teammates and me last summer, when we prepared for the Magic 2015 Team Limited Grand Prix in Portland.

About a month before Grand Prix Portland, members of The Lady Planeswalkers Society (LPS) began expressing interest in attending. LPS, founded in my adoptive home of Seattle by occasional Gathering Magic contributor Tifa Robles, is a group aimed at helping women learn and improve at Magic through weekly tournaments and our now-famous learn-to-play booths at gaming conventions. Our player base tends to skew casual, and many of our Portland-bound players had no prior experience at Competitive REL events. When Tifa and her husband Mike invited us all to their house for a âtraining session,â I suggested we hold a mock tournament, just to get everyone accustomed to the player meeting ritual.

For three consecutive weeks, we met up at the Robles residence for training. Everyone supplied their own product, and one member of the group was always responsible for printing out and bringing along copies of the official Magic 2015 deck checklist. We started our round-robin tournament with a player meeting, complete with timed pool registration, pool swap, and deck-building phases. In between rounds, our appointed tournament organizer checked decklists for mistakes and handed out game losses to any offenders. We capped off the day with a group debriefing session, in which we discussed what worked, what didnât, and what impressions we had of the format. After three weeks, everyone showed a marked improvementâeveryone was working together, playing better, and making fewer errors on their deck registration sheets.

During the training sessions, my teammates and I devised a system of our own to save time during the player meeting. After cracking our packs, we worked together to sort the pool, each taking a few colorsâ worth of cards to alphabetize. Player C read off all the card names to Player B, who accounted for them in the âtotalâ column on the checklist. We typically only needed twelve of our twenty allotted minutes for deck registration, which gave Player A enough time to look over the checklist and try to catch any mistakes. We also double-checked one anotherâs decklists after deck construction to further reduce the risk of clerical errors.

One of the most common mistakes that we noticed during our training sessions was that teams often didnât divide their strong cards evenly amongst all three players. Many teams would build two excellent decks and leave Player C with the dregs. Of course, a good player with a good deck is never guaranteed to win a match; if youâd like your team to succeed, give each of your players the tools to do so. At Grand Prix Portland, my teammates and I tried to distribute our strongest cards as evenly as possible. Hornet Queen, Kalonian Twingrove, and Chord of Calling all seemed to want to be in a heavy green deck together, but the player who wanted to use Scuttling Doom Engine as a curve-topper in her aggressive deck didnât need a Soul of New Phyrexia as well.

Of course, the most important thing your team can do is research the format. In addition to attending group training sessions every Sunday, we had team homework to do during the week, which usually involved reading articles. We played in individual Draft and Sealed tournaments and assessed plenty of twelve-pack pools as a team. By the time we drove down to Portland, listening to podcasts on the way, we were a sentence-finishing hive-mind.

Magic 2015 Limited was all about two-color pairs, each of which had its own archetype. There was the popular G/W Convoke deck, which made use of Triplicate Spirits and Sanctified Charge; the B/G Graveyard deck, with its Satyr Wayfinders, Undergrowth Scavengers, and Restocks; the artifact-centric U/R deck that wanted all the Bronze Sables and Juggernauts it could find. Most Team Sealed players find it easy to build three two-color decks, dividing the deepest colorâat Grand Prix Portland, I played a green deck with a light red splash, and my teammates played W/U and B/R, respectively. 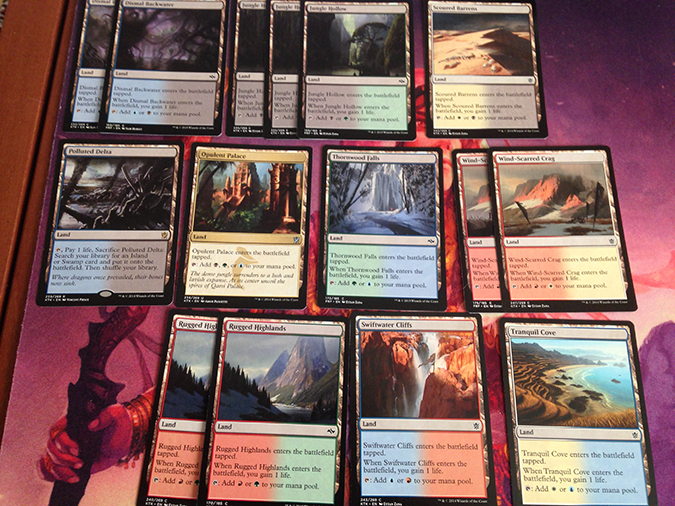 As a wedge set, Khans of Tarkir warrants a different approach. When you receive your pool in San Jose, look at your nonbasic lands first, just as you would in an individual Sealed event. Odds are youâll have plenty of them, between the twelve packs you just opened, but itâs good to know which combinations of colors are most readily available to you. Here are fifteen lands I opened in a practice pool, using the requisite six packs of Khans of Tarkir and six of Fate Reforged. Sultai is the clear winner here, as more than half of these lands produce blue, black, and/or green mana, but Temur and Jeskai may both have adequate fixing with four lands apiece. Mardu gets two Wind-Scarred Crags and a Scoured Barrens, which may be fine, as Mardu generally wants the majority of its lands to enter play untapped. Abzan gets the short end of the stick, with only one white-producing land in its colors, but there may be ways around that, depending on the color commitments of any Abzan deck we choose to build. With this pool of lands, just about any clan is fair game.

Next, letâs identify the cards that make us want to play a specific color pair, color group, or archetype. In Khans of Tarkir Team Limited, splitting your deepest color and building three two-color decks often doesnât cut it. Youâll want to find synergies between cards and build around them. Clan synergies are the easiest to build around, but there are other cards in the setâsuch as Trail of Mystery, Secret Plans, and any cards related to Warriorsâthat may demand decks of their own. 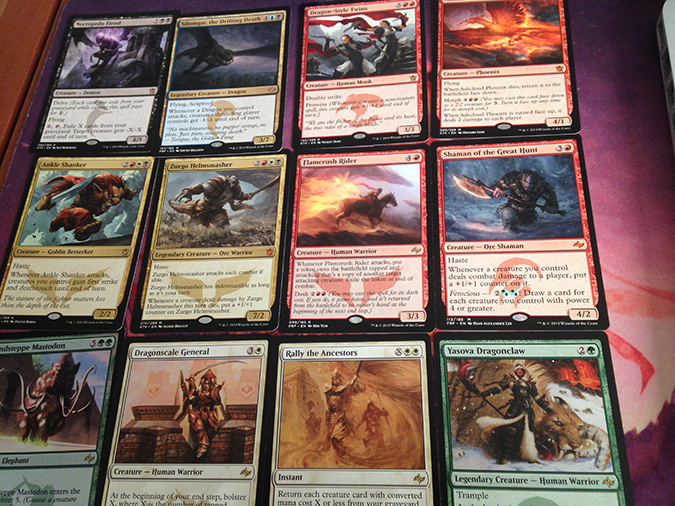 This pool has some excellent rares and mythics, many of which play well together. Ashcloud Phoenix, Yasova Dragonclaw, and Sandsteppe Mastodon trigger Shaman of the Great Huntâs ferocious ability. Our hasty red creatures also make Flamerush Riderâs ability significantly stronger. Iâm already thinking of building a Mardu deck, a Temur deck, and perhaps a Sultai deck with Silumgar, the Drifting Death and Necropolis Fiend. Iâm less impressed with Rally the Ancestors; itâs a reactive card that will probably be relegated to the sideboard of one of the white decks.

There were also plenty of useful commons and uncommons near the top of the heap, including Suspension Field, Feat of Resistance, Treasure Cruise, Arc Lightning, Heir of the Wilds, Destructor Dragon, Icefeather Aven, and Snowhorn Rider. I impulsively built a Temur deck, but strong as it was, it used up too many of the strongest cards in the pool, leaving Mardu and Sultai with a few bombs, but barely enough playables. I ended up scrapping Temur and building Abzan again, which played much better with the other two decks.

Iâll leave you with one last Sealed-pool-building exercise that you can try at home. What are the three best decks you could build from this pool?