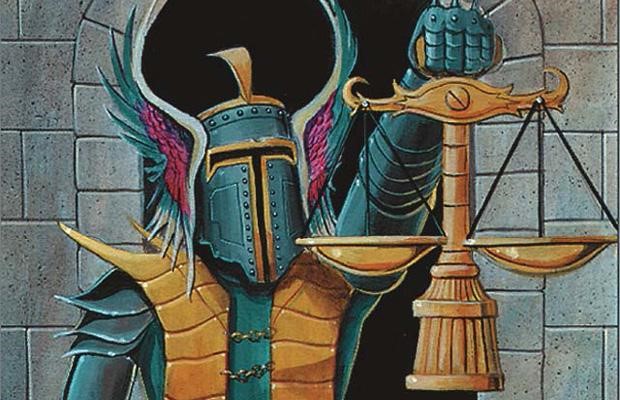 The Illuxcon main show floor was intimidating to say the least. Every artist who had made it to that level was a highly accomplished professional. Being aware of how many of the artists were (and feeling guilty for not recognizing the others), I was hesitant to say anything. I donât call them Art Heroes for nothing.

But when I approached Mark Poole, I found myself in the presence of a man who even by the high standards of the artists at Illuxcon was a really nice guy. He had a certain ease, intentionally unhurried, that permeated everything he did, his paintings included. Chatting in front of his table with a cup of coffee and smile, youâd never think this was one of Magicâs legendary Alpha artists; and in some ways, he isnât. Heâs just Mark, a guy who does what he loves.

Before working for Wizards of the Coast, Mark knew that he wanted to become an artist, but he had no specific plans past that. He gravitated toward what he knew, the outdoor lifestyle. Poole has a great affection for camping and being out in nature, his early career filled with work for hunting and camping companies such as Ducks Unlimited.

At Gen Con â91, Mark approached TSR and Wizards of the Coast with his work, meeting Jespyr Myrfors. Though Poole was unfamiliar with the world of collectible card gaming, he was enthused to join in the fun. He quickly took to this new role not only as a producer of fantasy artwork, but as a fan of it as well. Poole spoke with admiration of his fellow artists such as Drew Tucker, and he even recalled the first card to capture his imagination: Chaos Orb.

Mark Pooleâs tenure with Wizards of the Coast spans over a hundred cards and continues to this day. He is known as the artist for many of Magicâs iconic cards, including Ancestral Recall, Balance, Birds of Paradise, Counterspell, the original Islands, Library of Alexandria, and many others. He is among the few remaining Alpha artists who are still actively involved with the game. 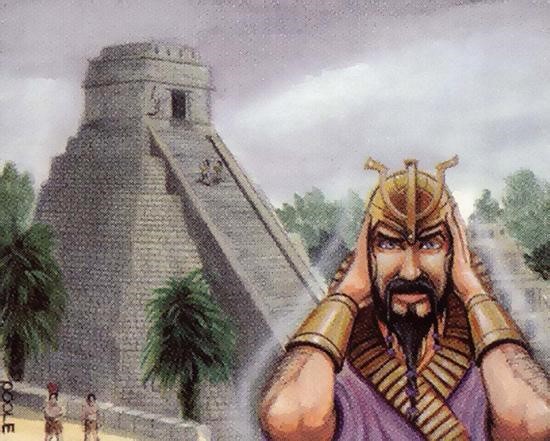 Mark never ceases to be amazed by the support of his peers and fans. He speaks with a voice of gratitude and humility that he considers himself lucky be part of such an enduring legacy. He finds that the fantasy genre leaves plenty of room for his voice to be heard, allowing Poole to express himself in the way that he feels drawn to. There is room at the table for all different types of art and narrative. Rather than feeling diluted by the range of styles in the genre, he finds the variety to be a huge help in understanding his relevance to the rest of the industry. In Markâs words, the fantasy illustration world is âreally cool.â

One of the most interesting parts of Mark Pooleâs artwork is how personal it is for him. Many commercial artists choose to twist or obscure their personal feelings on the subjects they are illustrating, but Poole wears it on his sleeve. Much like the man who creates the images, Markâs paintings are forthright and honest about who and what they are. When Mark is having fun, his subjects are fun, and when Mark cares deeply about what heâs painting, his style changes to match.

Weâre used to alternate-art promo cards from Friday Night Magic and such, but in the early days of Magic: The Gathering, there were often cards that would have multiple artworks printed within the same run. Sets like Fallen Empires featured multi-artwork prints on all common-rarity cards, while later sets like Antiquities were limited to specific card types (e.g. lands). Mark took the reins for one of these multi-landscape assignments, Urza's Tower. The series draws its reference from four of the five basic lands; we can only assume the other one burned down, fell over, and then sank into the swamp. 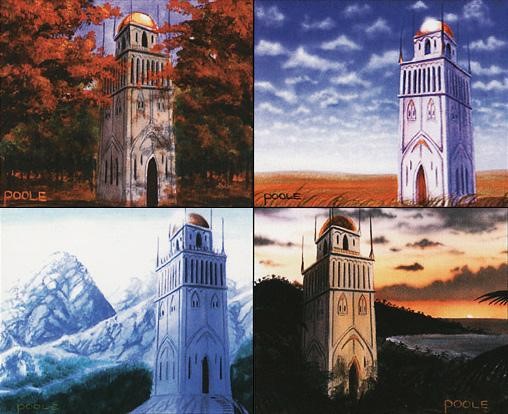 By keeping a fixed perspective on the tower itself, the viewer is free to admire the environment as it shifts location and season. There are a number of atmospheric effects being brought to bear for each of the variants, with the Plains tower serving as a point of a reference for the other three. Mark âgrowsâ the environment around each of the towers, using earth, stone, and foliage to give them a harmonious, if not ancient, presence. Poole also plays with the time of day to show the different ways that shadows could affect the tower. Dominaria is a strange and alien place, but Markâs attention to naturalistic detail helps the viewer feel just a little bit more at easeâat home.

There is a subtlety of color here that is ahead of its time compared to many of Markâs other works from this period. As he takes the tower to the forest and islands, the color drains from the architecture, letting the surrounding environment take over. The golds and reds of the island sunset warm up the purple-tinted granite of the tower, while the forest tower takes on a rustic hue, resembling painted wood instead of worked stone. Finally, the mountain tower is completely desaturated, taking on the color and stature of the snowy peaks that flank it. It gives each piece a cohesive look, reflecting the concept of Urza, a masterful artificer from ages past, who would have built his towers to integrate with the environment.

This is what I mean when I say you can tell what Mark Poole cares about. The only process that grants an artist such a profound level of insight into his or her subject is through countless hours of observation. The only way to rack up said hours without driving yourself crazy is to fall desperately in love with that subject. The more detail and artistry you find in a Mark Poole piece, the closer you come to knowing what this man loves. 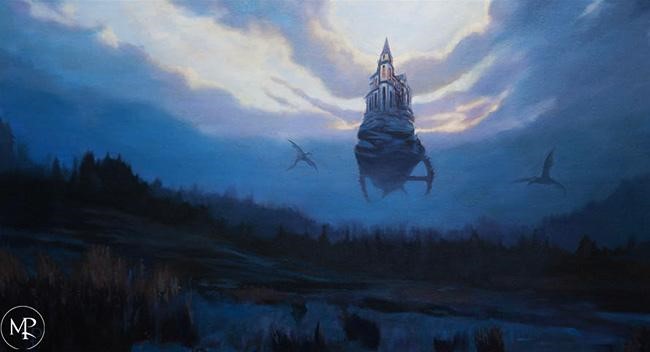 In the hour that we spent talking shop, I noticed something very important about Mark Poole: The man has a tremendous sense of humor. When he smiles, and he does so often, you canât help but smile, and you will see that in many of his artworks as well. There is a wonderful sense of playfulness to his work, much akin to Amy Weber (whom he also spoke highly of during his interview). In contrast to a world heavy with intrigue and dramatic story arcs, Mark Pooleâs artwork reminds us not to take things too seriously. Itâs little wonder that he was among the artists chosen to work on both Unglued and Unhinged.

Intentionally lacking in any sense of seriousness, characters from Markâs early work are more often caricatures and stereotypes. They are rendered with bright, saturated colors, standing boldly apart from their backgrounds. Warriors are covered in thick sheets of gleaming plate mail (Ashnod's Battle Gear, Chromatic Armor, Morale), and spells crackle with overt arcane power (Incinerate, Eternal Flame, Artifact Blast). Even wizards get the treatment. Cancel brings another element of Markâs humor to the fore, not afraid to be self-referential in his work.

In Counterspell, we see a character who is so over-the-top, so well preened, so obnoxiously loud in his dress that you canât help but feel some amount of smug satisfaction in seeing him fail. The technique of the simplified character over a detailed background is reminiscent of early cell-animation from studios like Disney and Warner Brothers. Animation studios lacked the time and resources to render a figure to the level of detail that their background artists could bring to a single image. Instead, they chose to intentionally simplify their subjects, not only making it feasible to animate a cartoon character, but also making them more relatable. Iâm not saying I know who Mark Pooleâs favorite cartoon character is, but I have my theoriesâ.â.â.â

I felt honored to be at Illuxcon for many reasons, not the least of which was being among the first to see Markâs new painting Omens in person. Itâs an absolutely stunning piece, and at 42" Ã 54", it has a presence on any wall. Mark has come a long way since the early days of Magic, and it shows. The paint is applied precisely, but individual strokes have an organic flow that is the sign of a confident hand. Heâs thinking about the bigger picture (no pun intended), with colors being pushed in value to help guide the eye to the focal point of the piece. Even the landscape itself comes in for the assist, directing the viewer with the rusted spokes of ancient gears. As the eye moves closer to the center of the painting, the tones become warmer, the sky softer, and the ground free of clutter. The piece becomes a container, a frame within the frame, for the main subject. 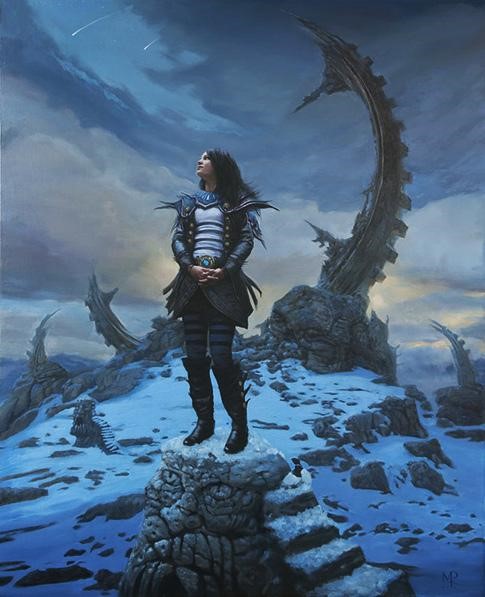 This woman, who appears in many of Pooleâs contemporary works, is like nothing Iâve seen in his career. Itâs the attention to detail, the subtlety of color that was previously reserved for environments. Itâs the visual weight of the pose, the emotional connection that is delivered in this quiet and contemplative setting. But what absolutely sells me on this woman is her face. The human face is easily among the most challenging images for any illustrator, as it requires a thorough understanding of anatomy, lighting, texture, and, in most cases, having spent a significant amount of time studying the person you are drawing.

And who better to spend time with than your own family? Another Poole I met at Illuxcon was Markâs daughter, the focal character in his work for many years. Having seen Markâs progression over the years and knowing what I do about his illustrative style, itâs clear as daylight to see how much this man cares for his family.

And that brings us to the real focus of Pooleâs body of work: balance. His pieces are vibrant with color and life, but they have a sense of peace to them. The human figure gives the viewer a proper sense of context in terms of style and scale, but leaves plenty of room for the imagination to fill in the blanks elsewhere in the painting. All through these works, it is possible to find playful touches: a face in a rock formation, a gear hidden on a necklace, puffs of smoke from tiny chimneys at the base of mountainous statues; these are little bits of detail left as a reward for the curious. Each piece is rendered with care and joy, bearing an enthusiasm for life that you canât help but get caught up in, just like the man who painted it. 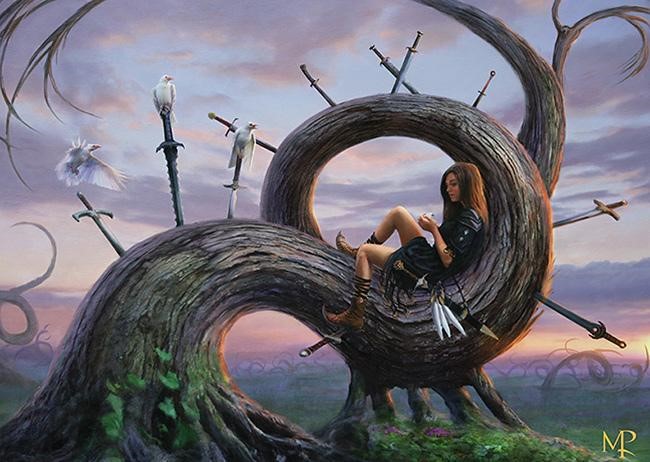 You can find Markâs work on his personal page as well as on Facebook.