The third installment of my High School MTG series is here! Thankfully, there are no major spills to report like last time, just more decks to show off! As shown in the picture below, students have begun building decks for themselves! There was a small bit of coaching from me in terms of general rules of thumb, sure, but for the most part these are decks built entirely by the kids! I'll be sure to showcase these casual creations in a future article. 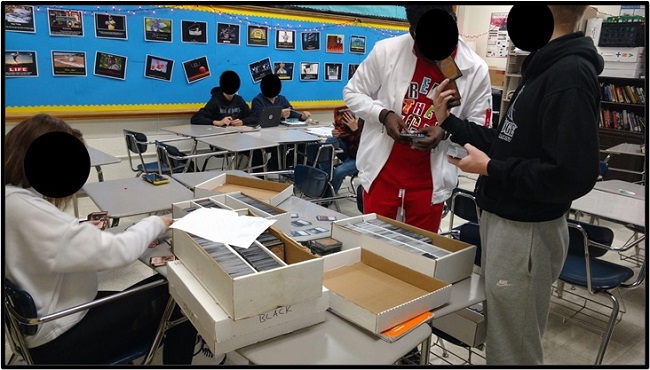 For those not in the know, this series focuses on the different casual decks I've been making with my high school students. These decks have all been made possible thanks to generous donations from the local MTG community, and for many are the first decks they've ever owned or played with. Curious what that might look like? Continue on to find out! 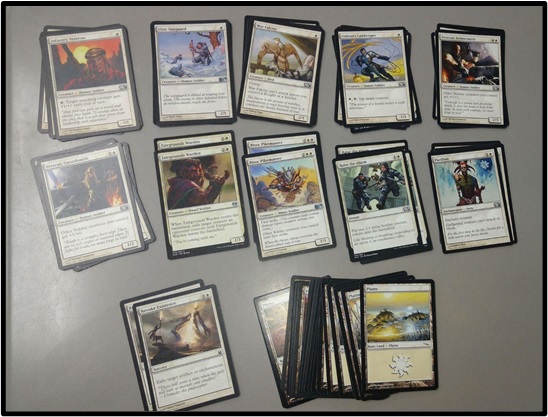 Isaiah has never played a strategy card game before, but he decided to stop by the club after hearing me mention it during class. When scouring the bulk for deck-building material, I made sure to pull out a playset of Veteran Armorsmith and Veteran Swordsmith just in case I would be able to build a respectable Soldier deck. As it turns out, this was not difficult, and soon Isaiah was playing his first ever game of Magic.

Cost: $8 at the time of publication

Infantry Veteran mostly serves to boost more relevant attackers, like War Falcon, who is the deck's only flier. I found that Isaiah was confused about the idea of an activated ability, and it took a good number of reminders before he really understood this concept and its intricacies. Gideon's Lawkeeper was another challenge. It's meant to tap down either blockers or large threats that the small soldiers can't best in battle, but teaching a new player to actually use it this way is a multi-step process. On the other hand, Elite Vanguard simply beats face in the early game and is much easier to learn how to use.

The aforementioned Veteran pair boost every creature in the deck except for the falcon and are the core of the deck. If Isaiah can get multiple copies of them into play his board becomes extremely threatening. This is especially so if Pikemaster also makes an appearance.

As far as interaction goes, Fairgrounds Warden and Pacifism are near-permanent answers to larger threats, should Lawkeeper find itself struggling to keep up. Revoke Existence was the artifact/enchantment removal option of choice. I would have preferred two copies of Cathar Commando, but I couldn't find any in the donated bulk. 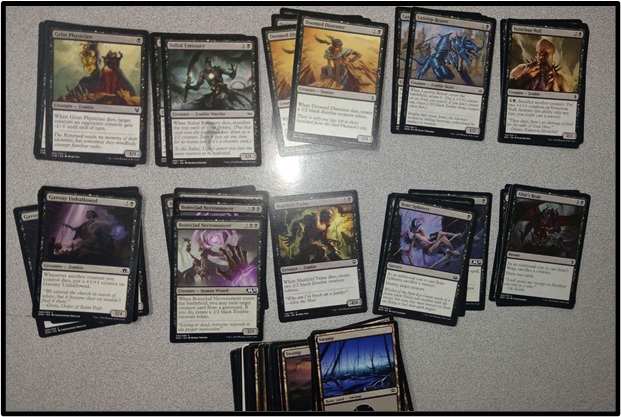 Another first, Mitchell was excited at the idea of zombies being in the game. So, I threw together something that I thought even George A. Romero would be proud of.

Cost: $7 at the time of publication

At its core, the deck is simply a Mono-Black aristocrats strategy. Sultai Emissary and Doomed Dissenter replace themselves on death, and serve as the perfect meal for Voracious Null. Lazotep Reaver also helps feed the ravenous zombie.

With all of this death occurring each turn, Gavony Unhallowed grows to scary proportions, feeding off of Voracious Null's scraps. Both Altar's Reap and Bone Splinters also trigger Unhallowed's growth while also drawing cards and killing enemies respectively. At the end of the curve, Boneclad Necromancer repurposes anything leftovers from the other zombies' meals, adding the Mitchell's undead horde.

After playing the deck for a while, Mitchell attempted to add White to the mix, which was an interesting look into a new player's thought process. He saw a few cards that would work well with his strategy, and being White, he knew he needed some plains in his deck. However, he soon learned that adding a couple White spells alongside a similar count of plains does not work well in practice. We sat down and talked about keeping the deck's card count to sixty cards, and I tried to explain how it was unlikely that he would draw both the new White cards and the few Plains included at the same time. He played a few more games without changes before he came to the same conclusion. 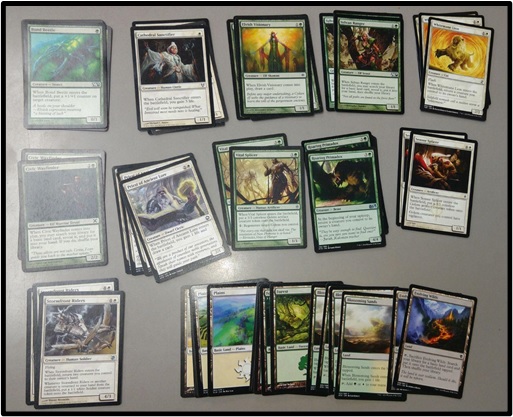 Reminiscent of Hokey Pokey, a personal favorite casual deck of mine, Diego's Selesnya Bounce deck abuses the enters the battlefield abilities of its various creatures by bouncing and replaying them. Normally, such a strategy would be too complicated for a newer player, but Diego has some experience. Apparently, he was gifted an EDH deck while at summer camp, and learned to play the game this way. I originally gave him a Mono-Green +1/+1 counter list, but after playing it for a while, he wanted to try something new.

Whitemane Lion gives early bounce, while Roaring Primadox and Stormfront Riders come down later. Really, the deck wants to abuse Elvish Visionary and Priest of Ancient Lore as much as possible until it can draw into Primadox, who then allows for a more permanent loop of bounce abuse. Sylvan Ranger and Civic Wayfinder ensure a land drop every turn, so that Diego never fails to be able to replay all of the creatures he's returning to his hand.

The deck has a surprising knack for life gain thanks to Sanctifier and Priest of Ancient Lore. Many of Diego's games will consist of him simply allowing his opponent to hit him every turn while he heals through it and swings in with his own threats. Most of the kids have not really figured out when it's best to attack or to sit back, so this often works out well for him.

Looking back on the list, there's definitely a few things I would change. Civic Wayfinder is unneeded, as the four Sylvan Ranger played alongside a massive amount of card draw is more than enough to make hitting land drops all but a certainty. I could also play around with the numbers on Sensor Splicer, Vital Splicer, Stormfront Riders, and even Bond Beetle. All of this would be to make room for more interaction. A copy or two of Reclamation Sage would definitely be worth it, and Banisher Priest-style removal options would also help. As it stands, Diego's current list can't do much to deal with larger threats beyond trying to drown his opponent in card advantage and creatures. Banisher Priest fits nicely since Diego could play it early to slow down early ankle biters, then bounce it later on to answer more intimidating monsters.