I donât know what to make of some of the things I have seen this preview season. There are a lot of great Commander cardsâthis set was clearly designed with Commander in mind nearly as much as Standard. Vorthos fans have a lot to love, and even a-Vorthos people (not antagonistic to the concept, more agnostic) like I am have been impressed with how Wizards of the Coast has chosen to handle previews. The set they constructed in Detroit to reveal Avacyn, for example, makes it hard for even the curmudgeoniest of curmudgeons not to smile a little at the flavor in this set. One of the motifs for this set is investigationâinstead of drawing cards right away, the player is given a token that can be redeemed for a drawn card later on. 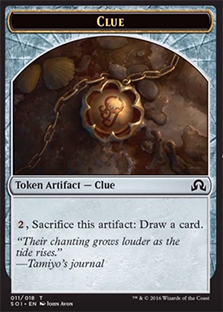 It isnât every day we see a token with flavor text, after all. These tokens are artifacts and will count toward things like metalcraft, affinity, and Cranial Plating, and they can be sacrificed to Shattergang Brothers or Daretti, Scrap Savantâthey can even have their numbers increased by various effects. Does the symbol depict Emrakul? Is it evidence that the Eldrazi are coming to Innistrad because their lives arenât difficult enough? Thatâs what Jace and others are investigating in the lore for the set, and since Clue tokens are the theme we have, why not build around them?

I want to run cards that benefit the rest of the deck in addition to giving us more Clue tokens, so I decided I should scour the previews for cards that will help us do both. One card in particular stuck outâitâs a card previewed by the fantastic Commander podcast The Command Zone, hosted by Josh Lee Kwai and Jimmy Wong. 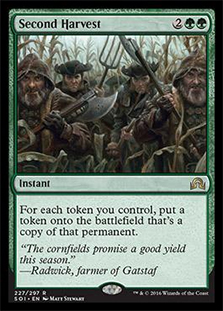 Yussss. As much as I want to jam this in a Trostani, Selesnya's Voice deck (whoâs saying we canât? Iâm absolutely going to. Any excuse to play SÃ©ance, right?), I think we want to be making a ton of Clue tokens with this. If we happen to make a bunch of creature tokens in the bargain, so be it. This is going to be savage if we already have a Doubling Season out, so weâre looking for a deck that cares about Doubling Season. Weâll also want to make some extra creature tokens, so we need a deck that lets us do that. We know weâre in greenâwhat else is in Shadows over Innistrad that can help us figure out which colors we want to be in? 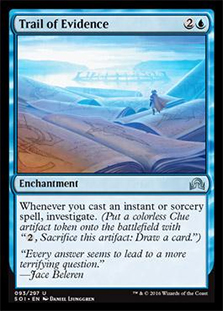 Blue seems to be a good place to be. Trail of Evidence is going to replace the cards we cast in our hands and is going to steer us toward decks that cast instants and sorceries. Are we going to be triggering prowess? We might be. This makes me want to green and blue, cast instants and sorceries, and play with creature tokens. I think the commander we want to build around is fairly obvious.

Riku of Two Reflections does everything we want to do with Clue tokens. Riku can even copy Second Harvest when you cast it to really make our shenanigans even nuttier. Weâll be copying more than just Clue tokens, but thatâs not to say the Clue tokens wonât be worth it. If we get enough of them and ultimate Tezzeret the Seeker, for example, all of a sudden, the Clues weâve accumulated threaten to alpha-strike our opponents in the face, and any that are going to be killed can just trade in for a card. This is starting to look like a lot of fun.

Since itâs been literal years since I last wrote about Riku, I think you will forgive me if I brew with this commander a second time. After all, itâs not a Riku deck weâre building, but rather a Clue token/Second Harvest deck that just happens to have a dynamite commander at the helm. What would it look like?

I like this pile quite a bit. I feel that we found some creative ways to make sure we always have a ton of Clue tokens out, and we have quite a few ways to make use of them for things other than just drawing cards. I wish there were a card that let us just win the game when we made it to like twenty Clue tokens or let us search for an Eldrazi and put it into play or something sweet like that, but I feel that weâll have quite a bit of fun as it is.

Creature tokens are great with Second Harvest, so I thought Iâd make that a subtheme. Clone Legion and Progenitor Mimic are just a few of the cards that fit this theme, not to mention our commanderâs ability to make a token of anything from Coiling Oracle to Mystic Snake. Copying those tokens can make our army really grow and give us some enters-the-battlefield triggers while weâre at it. Doubling Season, Primal Vigor, and Parallel Lives fit this theme well, and the advantage we gain here is formidable.

The Clue tokens arenât generate by too many cards, but it really only takes a single token to get us started. Once we get going, weâll find that we can stack these quickly. I like a few of the uncommon cards that deal with Clue tokens, such as Briarbridge Patrol. If all we do with these is draw cards, that sounds pretty good to me since cards are how we win the game. Being able to draw a ton from the Clue tokens means we can free up spaces that would normally be reserved for cards like Rhystic Study.

I included Thran Turbine, a card I have always liked because it gives us free mana to crack our tokens for a card or activate some of our other creature abilities. I have never really made Turbine work in a deck before, and I included it for funsies. Feel free to replace it with whatever you like.

Clue tokens interact with other cards in the deck in non-card-drawing ways. Pia and Kiran Nalaar can use the tokens to Shock targets. Cranial Plating counts them and can generate a large alpha strike on a flyer or trampler if you canât figure out something better to do with the tokens. Tezzeret the Seeker can turn them all into 5/5 creatures to bring the game to a close. I tried to make jamming a ton of Clue tokens worth it, and think I succeeded.

What do we think? Unfocused pile or deck brimming with synergy? I guess weâll have to sleeve this deck up and investigate (Iâm so sorry) for ourselves, wonât we? As more cards are revealed from the set, itâs possible weâll want to include some more cards from Shadows over Innistrad into this deck. Thatâs perfectly fine. We like the Clue-token motif in the set, and weâre going to like all the many ways the Clue tokens can help us win the game.

Any glaring omissions? Questionable adds? As always, leave it for me in the comments section. This was a fun one, and Iâm glad youâve continued to support me over the last two years writing this column. Until next week!