I don't talk about it unless it's relevant, so a lot of you probably don't know that I'm one of the co-hosts of Brainstorm Brewery, a podcast about helping listeners stay on top of price trends so they don't buy for too much or sell for too little. Part of helping people buy at the right time involves paying attention to emerging price trends on cards you don't necessarily play yourself in formats you don't necessarily play yourself. Price trends don't discriminate so I shouldn't, either. On our last episode, Punting Pioneer videocaster and living cartoon person Corbin Hosler pointed out an emerging price increase I would have missed entirely-a card called Ugin's Nexus. Someone had played Ugin's Nexus somewhere and had done well with it and people who were hip to the deck were buying their copies and the markets were beginning to respond. I don't know if you want to snap up the last few copies at $2 or not, that's your decision. What I do know is that when I hear about a price increase like this, it behooves me as a podcaster and finance writer to get to the bottom of it.

My technique is to head to EDHREC first if the card seems Commandery. Usually it will be very obvious why people are newly paying attention to a card. 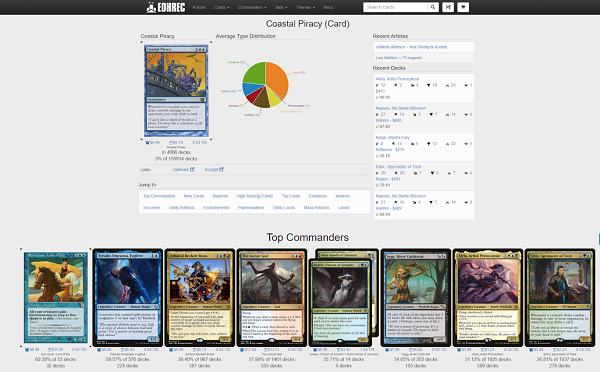 People are newly interested in Coastal Piracy, and the high percentage of Alela, Artful Provocateur decks running it explains a lot. If the card is used in Commander, a small amount of poking around on EDHREC can usually turn up a solution pretty quickly. When I can't find the answer there, like I couldn't for Ugin's Nexus, I had to get creative. Luckily, EDHREC isn't the only online resource I use.

MTGTop8.com catalogs decks used in tournaments and does some useful analysis to boot. If a card is used competitively, I'm almost always able to suss out why using that site. A trip to MTG Top 8 told me what I needed to know. 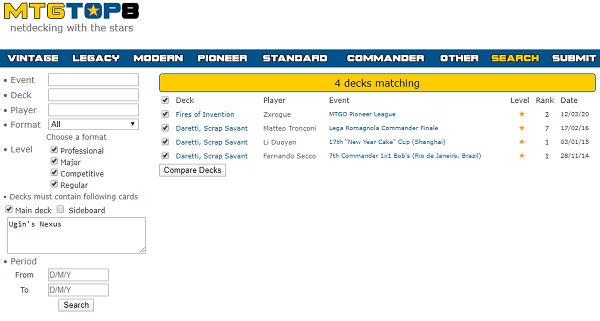 The top result is a Fires of Invention deck that recently got second place in an MTGO Pioneer League and the fact that the card is slowly creeping rather than catching completely on fire price-wise is that this is still not well-disseminated information. Some people are aware of this and buying copies because the deck might be fun (spoiler alert, it's fun) but not everyone. Let's click the link and see what the deck is like.

Not to put too fine a point on it, this is a Commander deck. That is, this should be. Ugin's Nexus is one half of the card Stranglehold and that's not great in Pioneer where your opponent isn't that likely to take a ton of extra turns. The secret here is that players can sac Nexus to their Korvold, Fae-Cursed King to get an extra turn, and extra turns for a deck like Fires usually means two more big drops to end the game. Karn gives you access to a wishboard, but we have a 40-card wishboard I like to call "the rest of our deck," so I'm not going to start envying their freedom too much. One thing I do envy, though, is that someone identified solid Commander tech before we did. Why isn't every Korvold Commander deck running a card that can give us an extra turn and also stop others from taking extra turns? Being able to sac it at will in decks like Korvold, Daretti, Scrap Savant, Daretti 2.0 and Breya, Etherium Shaper makes it a colorless Time Warp. The more you focus on artifacts, the more easily you can find ways to copy Nexus and then you have until the end of the turn to bounce the original so you can take the extra turn. If all the card ever is, though, is a colorless Time Warp that's half a Stranglehold when it's in play, I maintain decks that can sac artifacts easily have been sleeping on it. It kind of makes me wonder what else Pioneer has figured out that we could learn from. Here are a few cards I think Commander should give a second look.

Simic decks are always looking for Regrowth effects. Reap is a popular one because it was championed first by Gavin Verhey and then by Josh Lee Kwai, ensuring almost anyone who had ever sleeved up 100 cards at once would at least be aware of the card. What I like about Tamiyo is that you can usually squeeze one or two Regrowths out, or you can usually dig to an answer or just draw extra cards since Simic is good at knowing the top card (especially with Courser of Kruphix and Oracle of Mul Daya around). Tamiyo's passive ensures that you don't get ground out with cards like Grave Pact and Plaguecrafter, which are popular now. All in all, I think we're sleeping on Tamiyo a bit, specifically in decks where we want to rebuy spells. Not all of my Simic decks want this Tamiyo, but in particular, Pir//Toothy can really make use of this Tamiyo and keep her covered in counters to boot.

Oath of Kaya - from Niv-Mizzet Control

Oath of Kaya looks a little weak on paper: the one-time Lightning Helix and the non-scaling "rattlesnake" effect seem sort of underpowered, but I think in combination with other "tax" effects like Ghostly Prison, more existential threats like No Mercy and possibly some ways to re-cast the Oath, this could be a source of life and damage. Kethis, the Hidden Hand comes to mind, and if you're building Niv-Mizzet Reborn in Commander, why not take a look at some of the cards the deck plays in Pioneer such as Oath, Tolsimir, Friend to Wolves and Hostage Taker. Captain Sisay can tutor for Oath, also. The other Oaths found homes in planeswalker decks and since this one doesn't scale off of 'walkers, it is harder to find a spot for it, but I like it in a lot of builds, especially ones where they can only attack with one or a small number of creatures at once because this makes others a more appealing target.

I may have mentioned this before, I may not have, but the ultimate is everything I want to do in Commander. I like the token quite a bit and the built-in Recoil may or may not be useful, especially if their hand is empty. However, this ultimate is very, VERY 75% and I should be using this in more decks. I think this Sygg deck that I updated for Rankle could really use this card and I wish I'd noticed earlier. The deck rewards you for having small, early creatures get in for some damage and being able to make these tokens unblockable so they survive to mill cards multiple times could make that +1 ability even more effective. Atris and The Scarab God decks are using this a little bit, but I can think of a half dozen decks containing UB that I've built over the years that want a ' walker that can mill and steal. Getting to seven could be tough since this has a fairly big target on it, but if you end up baiting them into swinging into a big Aetherize or something, you succeeded in forcing them to abandon their plans to play into yours. Ashiok needs more love and it took Pioneer to make me see that, which is sort of embarrassing.

Pioneer has a ton of cards that we should play more and it was really interesting to pore over their decklists. In the future, I'd like to do more to break Doom Foretold open; the flexibility four copies in a 60-card deck gives people in Pioneer has a lot of people building around it. I think Dance of the Manse is on the verge of doing something beyond what's immediately obvious. I think Murderous Rider has looping potential and I'm excited to see if we can't use it as a real utility card-playing it for effect, saccing it for effect and getting it back out of the deck. You could even be a real cheesebag and Tunnel Vision for it! Pioneer decks reminded me that I love Nissa from War of the Spark and I REALLY love World Breaker despite not putting it in a list in a long time.

Since You both like and deserve a decklist, I'll ship you the list I would use to take advantage of Ugin's Nexus shenanigans with cards like Prototype Portal.

The snow theme gives the deck a little extra power with the addition of cards like Scrying Sheets, Prototype Portal and Heidar, Rimewind Master. You can use Blizzard Strix to blink other permanents than Nexus and I think it's a good addition even if it doesn't work with our combo because it puts the original back in play before the extra turn starts. Our goal here is to just run a typical Saheeli deck that as a surprise can loop Nexus and win out of nowhere. The extra mana you generate running Extraplanar Lens can go through Memnarch. Is there room for Aladdin shenanigans, or maybe Joven plus Liquimetal Coating? Who knows? This list is my gift to you, have fun with it, and use those extra turns to contemplate some fun ways to win.

That does it for me this week. Join me next week where I'll have more crazy ideas inspired by my inability to leave my house. Until next time!