It was a good April Fool's Day, if you ask me. We got a new Rick and Morty episode, Sinbad made a fake trailer for the "Shazaam" movie everyone swears he was in (based on a Berenstein Bears book, with a forward by Nelson Mandela himself) and I got to be part of a real sweet bamboozle that spanned multiple websites. The idea was simple â what if we pretended Chandler was the most popular deck on EDHREC this week and had knocked Atraxa out of the #1 spot?

It went pretty well, actually. First, EDHREC put up a doctored Chandler page that had a bunch of fake decks. The names of some of the decks was a clue but a lot of people didn't get the joke right away, which was dandy. The fake paged showed that for a few days, Chandler had exploded in popularity and had thousands of decks built around him, rocketing him to #1 in number of submissions and searches. The page is indistinguishable from the real Chandler page and was only the first part of the prank. The next part involved a fake MTG Goldfish screenshot showing Chandler had hit $20. 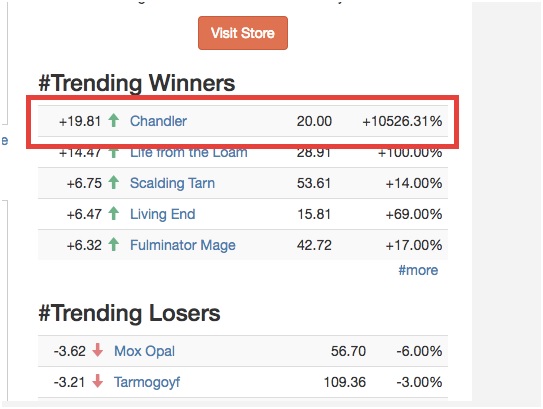 This, too was indistinguishable from the real thing. To give these pages some legitimacy and some more reach, we had EDHREC author Matt Morgan write a fake column in the same style as the one that went live on Monday, making people think he'd written early to discuss the overnight phenomenon. As a coup de grace, I involved MTG Price when I wrote a special Saturday edition of my normal weekly column, and I wrote it as if the spike were actually real and I was faithfully reporting on it. It was the most fun I've ever had writing an article for no money on a Saturday instead of teaching my daughter to read or swim lessons or whatever a parent would have done. With a (I hope) trusted financier and a major EDH website all reporting the same thing, we tricked more people than I would have predicted. Everyone had a good laugh once they figured it out and it was a great way to spend part of a Saturday.

The problem? The last laugh was on me. After writing that article where I pretended that Chandler was well positioned in a metagame with more Breya decks running around and talking about how Paradox Engine was the card that took the deck from obscurity to major player, I kind of really want to build a Chandler deck. Could that BE any more ironic?

Everything I said in my fake article was genuine analysis. If Chandler had suddenly gotten popular, it likely would have had something to do with the popularity of Breya decks and the printing of Paradox Engine, which can straight moider their board if they have a lot of artifact creatures and you have a lot of Red mana. Why canât we be a Mono-Red Paradox Engine deck that can keep artifact strategies from getting out of hand? I mean, no one is saying we canât, Iâm absolutely going to do that right now. I said in my fake article that Braid of Fire would power the deck, thatâs true, Braid of Fire is stupid in a world with no mana burn. Iâm not saying check its price now, but maybe do that and wonder how long it will stay this cheap. If this card made Black mana, it would be $30 by now. As it is, Iâm glad to have affordable copies to jam in the one Mono-Red deck Iâve been excited about building, basically ever, and win a few games with my free mana.

Red doesnât give us a ton of card draw but it does let us tutor for Umbral Mantle with Godo, Bandit Warlord and that has to count for something. Getting a few impact equipment for our Chandler or his buddy Joey Ross Joven can really help us shred their board. Honestly, Iâm just excited to have access to Joven because itâs essentially the same card only it rips through their mana rocks and utility artifacts the same way Chandler punishes their artifacts for also being creatures and their creatures for also being artifacts. As much as we despise artifacts, weâre going to lean on them very heavily. Weâll want artifacts like Toymaker and Ashnod's Transmogrant to make their artifacts and creatures into artifact creatures so we can make them die. Plus, if we make our own artifacts indestructible somehow, we can start Shatterstorming with abandon. This deck is going to be bad, and perhaps too bad to ever be truly 75% but Iâm making this stupid deck, readers. This is happening. All you can do is root for me to make it as good as possible because Iâm building this in real life and bringing it to GP Vegas.

What would this pile actually come out looking like? Will I be glad I am still excited days later about a silly prank from Saturday? Will I be able to convince you that youâre not being pranked right now? This deck and my excitement concerning this deck are very real. Maybe that makes me a lunatic but Iâve been called worse. Letâs see how this pile turned out.

This deck looks like a lot of fun, provided you get going properly. How likely is that? I donât actually know. What I do know is that there is a lot of fun stuff in here and I like it and Iâm glad I built this.

We have a lot of ways to untap creatures and I wanted to make sure we would really benefit from Paradox Engine, so I included a lot of creatures with tap abilities. If you want, you can consider adding Kiki-Jiki, Mirror Breaker (and an alternate win condition with Zealous Conscripts, which the deck may need) or some other tap creatures. Weâre not worthless without Paradox Engine, but it sure does improve things. We aim to get a lot of mileage out of our tappers and Heartless Hidetsugu plus Paradox Engine can make things really scary for them, especially with Kamahl, Pit Fighter. We have a lot of artifact mana to benefit from Paradox Engine as well.

There arenât as many ways to get a ton of Red mana repeatably as Iâd like but I jammed as many as I could. Extraplanar Lens is great because you can slap Mountain on there knowing no one else is going to really benefit because no one plays Red. Mana Flare will help them out in any case, so why not swing for the fences and run Caged Sun and Gauntlet of Might? Or be a poor and run Gauntlet of Power, either or both are fine. Just get that Red mana going so you can blow up all of their artifacts up.

We run quite a few ways to transmogrify their cards, turning artifacts into creatures, creatures into artifacts and lands into artifacts. This increases the chances we have a way to blow up that permanent, and thatâs a good thing. With Joven and Chandler around, none of their perms are safe.

What do we think? Is this a pile? Yes. Am I going to build it? Yes. Am I really going to build it? Yes. Is this a continuation of the April Foolâs Day prank? Yes and no. Itâs a prank on me at this point because Iâm actually excited about this stupid deck and Iâm going to have to go buy another Paradox Engine for it and Iâm going to get blown out by a banning, I can just feel it. Is this deck 75%, though? I built to a theme, I prioritized power level over consistency and linearity and Iâm going to have a ton of fun with it. Its weaknesses will reveal themselves in play-testing and Iâll see if theyâre worth shoring up or if this deck is relegated to the 50% scrapheap forever. What I do know is that I want this deck put together forever. Could it BE any more fun? I maintain that it could not. That does it for me, until next week!