In a year, no one is going to remember who came up with the 75% concept.

Donât get me wrongâI think thatâs a good thing. The more the community internalizes the concept and makes it their own, the happier Iâll be. Eventually, the rules we come up with here will be adapted or discarded or amended, and each group may put its own spin on it. I think the less monolithic the rules feel, the healthier the concept is. You never know for sure if a baby bird is truly healthy until it leaves the nest.

Iâve seen people ask each other online what 75% means, and the answers I see given arenât always how Iâd answer the question, but thatâs also a good thing. 75% can mean different things to different people. In fact, thatâs the issue I want to talk about today.

I feel that, to an extent, people arenât making the concepts their own yet. Itâs going to come with time, but I want to encourage it to go a bit faster if I can. When we first sketched out the concepts that made up the concept of 75% deck-building, I used words like ârulesâ and âprinciples,â which were intended as guidelines. I have seen a bit of tiptoeing around the concepts and apologies made for an errant card or two that donât fit. Itâs okay, everyone! Thereâre no penalty for your deck being âdisqualifiedâ from being considered a 75% deck. Itâs not a secret club. What 75% is to me is a mindset that you go into deck-building with. It can help you build with a goal in mind, that goal being that youâll end up with a deck that is good for any situation, that wonât oppress your playgroup or end up with you having your pants pulled down, and that isnât just a good deck dumbed down. Iâm not some sort of rules tyrant whose final pronouncements about your deck determine its fate.

I had all of this in mind when I had a nice e-mail forwarded to me by a reader named Mark Wischkaemper. Mark, like a lot of you hipsters, had always built decks that were 75% in nature before that was even a thing. He was looking for a little feedback, and, unfortunately for him, he did it during a week when I was itching to wax philosophic about people tiptoeing around the rules. It may look like Markâs e-mail set me off and I flipped the table and said, âIâm going to make an example ofâof this d-bag!â but thatâs not the case. I was going to write this article anyway.

I excerpted portions of Markâs e-mail that I think answer the standard questions I ask people whose decks I review, so if his responses seem stilted or unnatural, itâs because I framed some of the information he volunteered as responses to our typical questions.

How long have you played this deck?

The deck's genesis was from Jules's article on the same Commander a year or more backâhe presented the idea of telling a story with a Commander deck. The idea stuck with me, so I built it, using several of his suggestions and a number of my own.

Is there an existing principle of 75% deck-building this embodies or is there one you think we should create?

One of our rules is the powerâconsistency rule; Bruna, Light of Alabaster probably breaks that rule initially, but the nice thing is that she gives you a ton of choices. Sovereigns of Lost Alara can fetch Eldrazi Conscription, of course, to punish or finish a player ruining the game, but it can also fetch a Cage of Hands to deal with a troublesome creature or an Ordeal of Thassa just to draw some cards. The point is that the hands of the player determine how powerful that tutor is. In addition, Bruna's ability is a âmayâ trigger, so you don't have to dump your hand or suit her up with everything in the âyard. You don't have to steal someone's Aura if you don't want to. Finally, I do have two counters in here, but again, they are there to make choices (and in part, itâs because they're in-color). Hindering Light, especially, seems 75% to me because it keeps you from doing something specifically to me, as opposed to stopping you from casting that giant monster you really want to play. Render Silent, frankly, is probably a harder 75% sell, but there's only the one hard counter with no way to search for it, and it doesn't have to be played even if it's drawn.

Are you winning roughly 1 out of every X games, where X is the number of players?

My playgroup is normally four or five players, and out of the eight games I've played with Bruna, she's won two, so that seems right. We have one player with a precon out of the box and one player with a five-colored Superfriends deck including every Planeswalker ever made, so itâs a pretty varied group.

His decklist was as follows:

Mark said the breakdown of lands doesn't really matter here. On that we can agree, Mark. On that we agree.

Honestly, Markâs deck looks fine to me. Before we delve into card choices, I want to delve into something he said.

Finally, I do have two counters in here, but again, they are there to make choices (and in part, itâs because they're in-color). Hindering Light, especially, seems 75% to me because it keeps you from doing something specifically to me, as opposed to stopping you from casting that giant monster you really want to play. Render Silent, frankly, is probably a harder 75% sell, but there's only the one hard counter with no way to search for it, and it doesn't have to be played even if it's drawn.

Oh, one more thing: Battle Mastery and Corrupted Conscience mean an auto-kill if they're on Bruna and she connects. Again, I have to draw it naturally, and I don't have to do it even if I've drawn it. I've played one game, though, in which everyone was relieved when I killed the table in three turnsâthe game had gone on long enough, everyone had done some cool stuff, and we all were ready to shuffle up with different decks.

At the risk of appearing to reverse something I said earlier, I think I need to mitigate the rule stating, âItâs better to punish our opponents from doing things than to prevent them from doing things.â You should never feel that you need to apologize or explain yourself for running Hindering Light. In fact, I think lots of counterspells are great 75% cards. Render Silent can bail you out of some games. Time Stop may be among the finest Commander cards ever printed. Desertion may be in my Top 5 for Most 75% Cards Ever Printed. I think countermagic has a real place in 75% decks, and Mark may actually not be running enough.

Countermagic does several very important things, and I think its utility and importance are lost when people think about how having a spell countered feels. Itâs a bit deflating, so people reason that countermagic doesnât belong in a 75% deck. Those are pretty good instincts, but we have to remember that a 75% deck isnât a 50% deck because it is one that is capable of beating tuned decks. On one end of the spectrum, we have a Talrand, Sky Summoner deck with so many counterspells that /u/revoltofthebeavers made his wife cry. On the other end, we have a deck that cut Runeboggle because he didnât want to hurt anyoneâs feelings. Letâs label those extremes 100% and 50% and shoot for somewhere in the middle.

So, what do counterspells do that is so important?

First of all, they can slow down the player in first place. While it feels bad if countermagic is entirely keeping you out of the game and it can feel oppressive, itâs important to prevent a player who pulled out way ahead of everyone else from executing his or her masterstrokeâwhether thatâs a Tooth and Nail forâ.â.â.âit doesnât matter (itâs never anything nice) or a Shatterstorm or an Ulamog, the Infinite Gyre. Stopping someone else from ending the game prematurely matters, and if your opponent is playing a 100% deck, countering a key spell may be your only hope.

Counters also help keep your strategy on track. Stopping your opponent from casting a Treachery on your commander with a Hindering Light is not violating our rule against preventing our opponent from doing things. Mana Leaking a turn-two Chromatic Lantern so an opponent is color-screwed is preventing our opponent from doing things. Keeping your commander from beating you in the teeth next turn is not, and I think the key difference is that if we all left each other alone, it would be a race to see who executes his or her strategy first. Dealing with an opponentâs strategy is something I fully endorse, but preventing it with spells like Armageddon is no fun. But you have your own strategy to execute, too, and stopping someone from stopping you is just as important as stopping someone else. Being able to do your thing is important in those tough matchups. Remember that we donât want to lose fewer than 1 Ã· X games, either!

Countermagic isnât the only way to keep on track and do your thing. Darksteel Plate, Swiftfoot Boots, Distant Memories, Asceticismâa little prevention goes a long way. Remember that a 75% deck isnât one that rolls over and lets its opponents go to town on its strategies. To prevent such a thing would break one of our rules. You still need to do what you can to win the game, and sometimes, that means protecting yourself.

In fact, I feel so strongly about mitigating the chilling effect brought about by interpretation of our rule that states, âItâs better to punish than prevent,â that I propose a new rule.

This doesnât have to be anything oppressive; it can be as simple as playing Nevermore naming Merciless Eviction in our enchantment deck or running Leyline of Sanctity or suiting up our commander with Darksteel Plate. When possible, we should allow our opponents to do their things, but if their things are preventing you from doing your thing, maybe they need new things.

Letâs take a look at how powerful I would make Markâs deck and still argue that itâs 75%.

And thatâs it. Iâm happy for Mark that heâs currently coming in right around 1 Ã· X games and that his group doesnât roll his eyes when he busts Bruna out. Still, I think Mark can go even further toward making his deck better and still not run afoul of the 75% rules. Remember that this is an art, not a science. 75% is a mentality. Itâs an approach to deck-building. Itâs an ethos. If you have a 75% mindset when you build and play, you can run a very powerful deck and never upset your group or win or lose too often. There is a place in our decks for Counterspells the same way there is a place for Wrathsâand face-up tutors and cards like Deadeye Navigator and Prophet of Kruphix. Donât sweat breaking one of my ârulesâ because those arenât the real test of a 75% deck. The real test is how the deck performs and how the group receives it. So go out there and brew something, and make them rue the day they messed with you 1 Ã· X of the time.

On a final note, I would kill to be able to play better Auras in Bruna. I am going to get Wizards of the Coast to revive the Magic Invitational circuit, and Iâm going to take the event down. I already have my Invitational card all figured out. 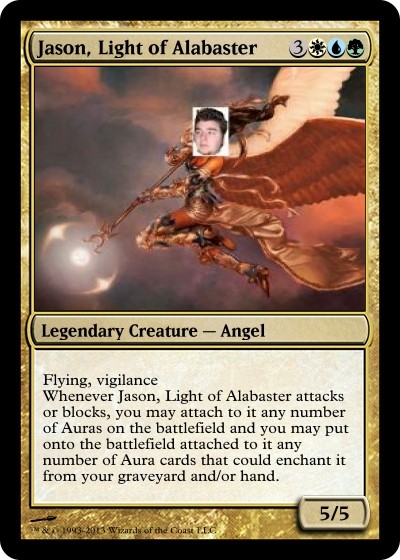