Like many of you, I am experiencing serious product fatigue. Wizards still hasn't gotten my LGS enough Commander 2021 decks for me to get the ones I preordered and already we have fully previewed all of Core Set 2021 and all of a puppies and kitties and reprints supplemental set called Jumpstart. It's too much. I don't just have wallet fatigue, I have to fully upload these entire sets to a pricing database for one job and schedule preview articles about both sets. Also, I sell cards which means I need to figure out which one of the 9 possible versions of the new Teferi I have before I sell it. Every website that sells cards needs to create 9 new categories for this card. I don't mind doing all of that, but 3 sets within... I actually don't know how long it's been since I started sheltering in place. The point is, I was feeling some fatigue and wasn't expecting to be revitalized by a single card.

Yet a single card was all it took. It only took one reveal to get me completely jazzed for building a new deck and ruining lives with it. Everyone who is a fan of this column knows that my two favorite things to do are to steal people's permanents and to gift them dangerous permanents (then Mindslaver them, if possible). What if there were some way to get some of that sweet "steal your cards" chocolate in my "here you go, this is going to be a bad time" peanut butter. Well OBVIOUSLY THERE IS because I wouldn't have written that entire paragraph if there weren't and this article would be about something else and you can literally see the card with your peripheral vision. 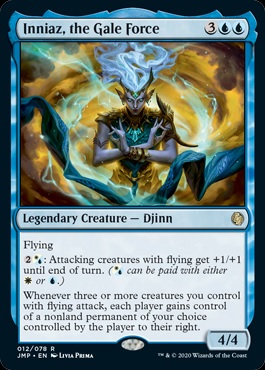 Are you as excited as I am?! Inniaz doesn't just let you take permanents and it doesn't just let you gift permanents, although it does do those things. Inniaz also lets you take permanents away from people and give them to someone who can either use them better or just stop the original player from using them. Give the combo piece to the aggro player. Give the aggro player's beater to the control player and let them show the aggro player what it feels like to get beaten with a big creature. Steal the control player's commander and watch them struggle to win. Give the Combo player a Illusions of Grandeur because that is, after all, a combo piece and you heard they liked combo pieces. There are plenty of good Magic cards that have very significant drawbacks that you can account for by building around them - right before you give it to a player with no way to deal with it and laugh at them. We get to steal cards, we get to gift cards and we get to thwart the plans of everyone at the table. The drawback? Being able to do this requires us to attack with flying creatures, something I hear Blue and White decks are pretty good at.

The first part of my research should have been to focus on ways to make tokens but I'm so hyped for the nasty things I want to donate that I completely ignored that and focused on stuff I want to give other people to make them sad. The EDHREC page for the card Donate and the page for the commander Zedruu were invaluable resources, but I spent a lot of time on other sites coming up with the nastiest cards I could. This is a stupid deck and no one should get mad that you're doing stupid stuff with it, but gifting someone a Transcendence might just kill them so they'll need to respect the power of your weird pile of cards.

I found two classifications of Donation cards - cards that shut off part of the opponent's deck and cards that hurt them very generally. Statecraft is a fun card to donate to someone playing a fairly aggressive deck - it shuts off their ability to deal damage with creatures and Illusions of Grandeur is a fun card to donate to someone with 20 or fewer life because it hurts them very generally (and lethally). A Grid Monitor for one player, a Thought Lash for another and an Embargo for the table. Zedruu decks are very good at this, however, we are going to be less good at donating these permanents than they are. Why don't we just play Zedruu? The reason? There is another component to Inniaz.

We get to steal whatever we want. The ability does not target which means we can steal permanents with hexproof and shroud. We are forced to do this to the player on our Right but other players usually have good cards because they're trying to win and we will always be giving away something that hurts the player on our Left, or the entire table. Not only that, the deck will have lots of spells that exchange control of permanents even more, creating a lot of chaos at the table. I mostly play on webcam these days and this is going to be extra chaotic with people quickly scribbling proxies, which I'm not sure I don't actually love. We'll run our Daxos and Thada Adel nonsense in this deck, a few counterspells to keep things where they should be, a bunch of ways to make tokens and we'll call it a day. This is going to be fun.

As always, this is a bit of a hybrid of different approaches and you can pick one or the other to commit to more as you play with the deck. I think 99 cards is more than enough room to get a few different things going, so let's talk about what this deck can do.

I think there is room for a blink subtheme, especially with some more cards. Brago flies, for example, which means you could make more out of cards like Mulldrifter by adding Cloudblazer (I prefer Mulldrifter here because it has megacycling) and you could add Soulherder, Stonehorn Dignitary and maybe even go deeper. Two cards from the new Core Set, Barrin, Tolarian Archmage and Niambi, Esteemed Speaker would be good with a blink and bounce subtheme. You sacrifice flying creatures but you get to do more things with your own creatures on your turn, and bouncing cards of theirs with Man-o'-War and Tradewind Rider could deal with things you don't want to give to other players but don't want the original player to have, either. Blink and bounce makes Agent of Treachery and Master Thief even better. There are not obvious cuts but if you wanted to go deeper on Blink, some of the cutesier donate cards could go, or maybe the Shackles, Helm, and Vat. Rite of Replication becomes even better in this kind of deck.

There aren't really any cards I want to donate that I didn't include. A few that popped into my head seemed better than they were because I was misremembering how they worked. I wanted to add Dovescape to make it so an opponent couldn't cast spells but Dovescape doesn't just hurt one player. I also added Form of the Dragon until I remembered that this is Commander and I can't do that. There aren't too many cards like Thought Lash anymore, that instantly kill people if certain conditions aren't met (outside of Black, that is). Nine Lives is a new one, though, and that went straight in the deck. If you wanted to do more donation shenanigans, I recommend cards like Legerdemain or Juxtapose - they're not just great words for Scrabble, they really impact the board. I added Gauntlets of Chaos the last time I made a Mindslaver deck and those still do work.

Speaking of Mindslaver, that may be your first cut. The deck doesn't have room to make people make bad decisions, really. You can still use Mindslaver, but the deck isn't optimized for it and it may draw more heat than it's worth. I'm including it in my list because I like it and playing with it will spark new ideas of what to include to make it better. Or you can just cut the stupid thing. It's a card for a specific kind of person and not everyone is about that life.

I think there are enough fliers here, but you may want to consider one or two more ways to make tokens. I think the number of flying utility creatures could use a look, too. If you reduce the number of ETB creatures, Hushbringer might be a good choice. In my research, the EDHREC page for Isperia the Inscrutable was helpful because it is also rewarded for having creatures with flying and being able to find them means you can take a toolbox approach to the deck. I included Isperia in this deck for the same toolbox ability, but it's much, much tougher to get to work in here and may get cut. There are lot of ideas from Isperia lists, so check out that page for ideas.

Finally, I included more countermagic than I normally do to protect my cards and to keep opponents from playing creatures like Trostani Discordant which really take all of the fun out of a deck like this. You have Strip Mine and friends to deal with Homeward Path, but countering a Brand could be the difference between having fun with a quirky deck and losing a lot of your enthusiasm from one card. There are some counterspells that can steal spells like Commandeer, Spelljack and Narset's Reversal, and those might want a look, too. I am not a huge fan of countermagic locking someone but that happens much less frequently in multiplayer games and in reality, you'll want a healthy amount of countermagic, especially in a deck like this that is very light on removal because it's more fun to steal problem permanents.

Did you take one look at Inniaz and fall in love the way I did? Do you think it's going to make people too salty to donate them a permanent that is about to blow up and kill them? Have you figured out how you're going to use Mindslaver here? Let me know your thoughts in the comments section, and don't forget to share this in your local Facebook groups to let people know that their days of controlling the permanents they own are numbered. Until next time!