Jumpstart came out right on the heels of Core Set 2021 and it may have overshadowed that set a bit. Jumpstart commanders are very exciting and as soon as they spoiled Inniaz and Emiel, I knew what I wanted to brew right away. It wasn't until the hype that came from hoping I could get some of that product was tempered by the reality that no, I could not, that I realized I owed Core Set 2021 another look. Specifically, I should look at potential commanders that would be good for building a 75% deck around. Couple that with losing to a Goblin combo deck with Cyclonic Rift AND Arcane Denial in hand and I was in a mood to find a commander I'd overlooked.

It turns out that I may have let how everyone else was building pollute my outlook a bit and I had overlooked a very, very 75%-leaning commander. While the deck leant itself to being built with Goblins in mind, it was possible to avoid building with tribal-enabling cards. Goblins have good abilities and they lend each other bonuses and synergize well, so there you can get away with not cluttering your list with Door of Destiny, Coat of Arms, or Vanquisher's Banner. Letting Goblins be Goblins frees up a lot of real estate in the 99 and lets you hybridize those little monsters with another tribe that I had previously explored, but not as a Mono-Red deck. Core Set 2021 finally gave me the courage to build the deck I've wanted to build for a long time - Tribal Rogues with Aladdin as the commander! Were you wondering why I went this long without building a deck around Aladdin? Well, me too! Let's take a look at what Aladdin brings to the table, shall we?

Wait, Summon Aladdin? Oh, that's right, I see what's going on here. Aladdin was from Arabian Nights, which was before the set Legends where they introduced the creature type Legend. Let me just check out the Oracle text to see if they added any other types in addition to Legend. 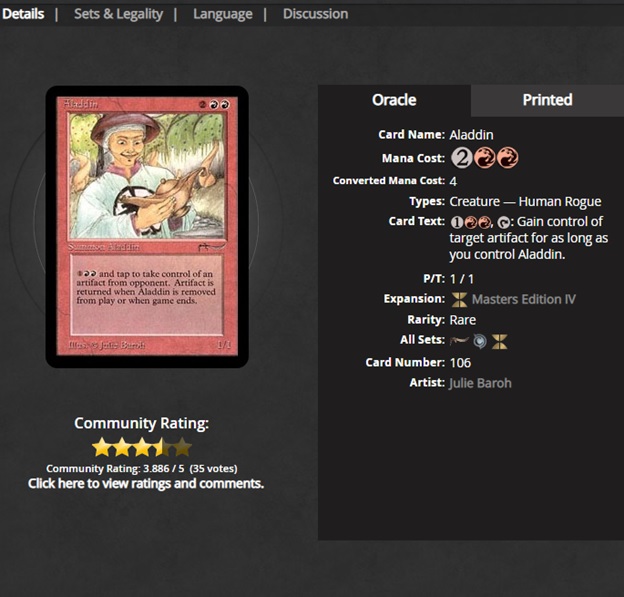 O.K. It's just that... he has a NAME. And it's one we all know. You know, from legend. He's not "an" Aladdin, he's "THE" Aladdin. Prince Ali, yes it is he, one of... many Aladdins. OK. If you were wondering why there were no Aladdin decks on EDHREC, this would be why.

One good thing about Wizards refusing to go back through and bestow legendary status is that they at least had the presence of mind to make him a Human Rogue. Anything that synergizes with either of those tribes can help him out, and while he can't helm his own deck, he can surely impact the 99 of a deck built around some other creature, and I have just the one. But you already knew that. Because of all of the clues I don't have to list. The point is, this wasn't (just) a bit I'm doing, it also illustrates the very important point that I'm not building my deck around (good guess, you're correct) Subira, Tulzidi Caravanner, I'm building it around Subira, Tulzidi Caravanner AND Aladdin. And probably Chandler, too. Could I BE any more obsessed with the 90s?

OK, the list is exactly as long as you think, but getting in there with Robber at will is going to be a lot of fun, and thinking about other Rogues I want to be playing, though not necessarily attacking with, got me thinking about the non-Goblin sports in the deck and how much fun we can have with them. Aladdin is cool, but using Aladdin a lot will be even more cool, and if you think about ways to get lots of activations in, you realize how powerful the effect is. Add in Chandler and Joven to keep them off of their artifacts, Starke of Rath to destroy anything you want and Humble Defector and you realize that cards like Illusionists' Bracers and Umbral Mantle could do a lot of work and be a lot of fun. With your smaller creatures being very easy to send through unblocked, you're going to draw a lot of cards if you're willing to risk binning a whole hand to make it happen. Drawing a lot of cards means you'll get your Aladdin and your Mantle more often, which means these sorts of shenanigans can happen often in a game.

Goblins can help with how mana-hungry the deck is bound to be, which is why the two tribes are such a good fit. Cards like Brightstone Ritual and Skirk Prospecter can give you the early mana you need to play expensive stuff and start going off. The great part about wanting to use Aladdin a lot is that you can swipe their mana rocks to fuel more activations. Cards like Magewright's Stone, Thousand-Year Elixir and Staff of Domination are good with quite a few cards in the deck. Even if we're just re-buying a Moggcatcher or Goblin Welder activation, those untap Artifacts will make the deck a lot of fun to play. Unwinding Clock gets a look in the deck since Artifacts will be so good - even untapping a Mana Vault or Basalt Monolith for free on every turn can add up. Mana may be an issue early, but since our creatures are cheap, we can play a bunch early, punch through for damage and make sure we draw land and mana rocks to ramp up midgame. Even if we end up pitching something important off of a Subira activation, don't worry, because Welder and Daretti can bring those cards back.

Do we have enough room for our Goblins and also our Rogues and Artifacts subthemes? Let's find out!

I'll be honest, this deck was 100% an excuse to play around with Liquimetal Coating. Coating is a very useful card and I don't think people use it enough to see just how useful. First of all, it can make any permanent eligible for Aladdin or Chandler/Joven shenanigans. This doesn't come up in your games so you don't know how useful that is until you start playing with these cards, but having engaged in some of these hijinks and tomfoolery, I can attest to their efficacy. Coating lets you sac Mountains to Goblin Welder, it lets you threaten opponents' favorite permanents to make them think twice about that Shatterstorm and it lets you do a third thing which you will figure out yourself when you play with the card already. A deck like this is the perfect place to try it out.

I cut a lot of the non-goblin, non-artifact cards from the creatures in this list but still left a lot. That's where I might start hacking away if I find cards I want to add. I realize that Captain Lannery Storm and Surly Badgersaur are very good with our commander but I think synergy may end up trumping raw power here. Besides, I cut very deeply into a few of the other sacrosanct cards like Fiery Emancipation and they may actually need to get added back to the deck. You'll need to jam a few games to see what needs to go in, but I have a feeling that we're not going to deal as much damage as the stock list and we may want to address that. Recruiting a bunch of their creatures to our side makes up for that, in my experience.

We may want more artifact creatures of our own. Hope of Ghirapur is pretty good in the average Subira deck but it's even better in this one where we can bring it back from the 'yard in multiple ways. Should we play Burnished Hart? Bottle Gnomes? Kuldotha Forgemaster? There are a lot of candidates and some of them might even be good candidates. Having more artifact creatures in the deck means we have more chances to hit a big Scrap Mastery late in the game, which can be back-breaking for our opponents and very good for us since we'll be dutifully pitching our hands early and often. Bag of Holding is very good in a deck like this and so is Daretti, so play both.

Our cards matter, but so do theirs and we're going to both cast their spells and steal their permanents. Grenzo, Havoc Raiser is the perfect embodiment of our Goblin Rogue unity and should be hitting them as much as possible. He's the closest thing we have to my pet card, Thada Adel, Acquisitor and he does a very good impression, as does Robber of the Rich. Casting their spells makes up for the relatively small amount of damage these creatures do and is the most fun you can have playing Magic, if you ask me. We are aiming to win by disrupting their strategy by stealing key elements of their plans so the damage we deal isn't super relevant. More players will have to resort to combat when you disrupt their ability to cheese with combos so you're not on the hook for all of the damage, anyway. Those combo players become tempting targets for the aggro decks, also, so you might be able to fly under the radar if you don't Aladdin the aggro decks too much. However, if they're throwing a ton of Swords around, they may be the ones who need to be brought back in line with the rest of the table.

What do we think? Too cute and not worth deviating from the stock list? Did I cut your favorite card like Hellraiser? Do I want one or two tribal payoff cards? Let me know in the comments section. Thanks for reading, everyone. Until next time!