Conspiracy 2: Conspiratorial Boogaloo previews have started up and already we have plenty to salivate about. Not only do we get a reprinting of Inquisition of Kozilek, which was much needed, weâre also getting some very interesting new stuff as well. Conspiracy was a delightful mix of reprints, decent new EDH cards, draft-specific cards to jam in your Cube and even a few new Legacy/Vintage-playable cards. In short, the set had something for everyone. Conspiracy is shaping up to be just as jam-packed with the goods and the cards that were previewed this week have me thinking about possibilities.

Commander is best played with 4 to 6 people in my view. When you have a lot of people trying to do a lot of different things, it sometimes turns into a race to assemble your gizmo and win the game, whether your gizmo is a fully-suited-up Uril the Miststalker or some manner of combo that deals everyone a millions damage. It can be easy to ignore the other players and focus on racing to do your thing, so when a card or mechanic comes out that encourages players to attack and otherwise interact with each other, I think itâs worth exploring. 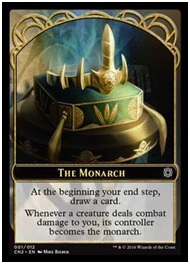 This emblem denotes that the player who controls it is âThe Monarchâ and the emblem states the way that other players can become The Monarch. As an additional rule in my playgroup, every time you pass the emblem to another player, you have to say âThere! I just sold you to King Gorilla for a cigarette. And I donât smoke!â because thatâs how I get down.

This encourages people to dethrone The Monarch and claim the bounty of a drawn card at the end of oneâs turn. Speaking of dethrone, that was a sweet mechanic introduced to us by a character named Marchesa. I wonder what sheâs been up to lately. Last we heard, she paid Kaya to shiv Brago in his neck meat and claimed the throne for herself. Marchesa is a key player in the new Conspiracy as well and she is once again a great showcase for the ability that makes people The Monarch. 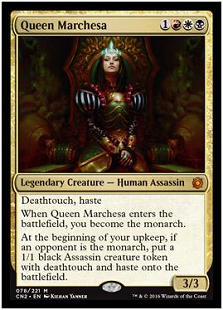 This is a savage card with a lot of abilities and a very cost-effective body which can be important since youâre going to be concerned with attacking and attacking often. The goal is to attack so often you are always getting the card draw trigger even if you donât manage to stay The Monarch and other people get to draw, too. You can try and blink her so that you keep opponents off of that draw trigger, even if they managed to hit you; but, for the most part, youâre going to just want to swing a ton because youâre incentivizing people to attack you when youâre the Monarch if they want the cards. But that would make them the new target! Itâs going to be interesting to play with this card because it encourages players to think of an entirely new dimension to the game on top of their normal game plan. Do they let you draw a ton? Do they paint a target on their own back and give you chump blockers from hell? You force them to play the game your way to an extent and youâre best equipped to play that way since youâre in Mardu.

In fact, it seems like Mardu is basically ready to slot this into decks that already exist pretty seamlessly and play the way theyâve been playing already. You could argue that this card is a bit boring because this encourages attacking and thatâs Marduâs plan already (same for Boros), mindlessly swinging. However, all of a sudden youâre drawing a lot of extra cards unless your opponents play the game the Mardu way and what could be more interesting than that? Can you imagine some Azami player attacking you with a Trinket Mage to keep you off of drawing cards? Hilarious. A few of the cards revealed this week can make you The Monarch when you cast them, and one of them is pretty exciting. I hope more are revealed later and if they are, they go right in the deck. 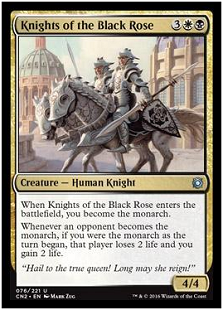 Iâm excited to serve with this alongside Marchesa. This offsets some of the life you lost getting dinged, gets you Monarch status back and has a decent body. All in all this is a sweet card to go in a new Marchesa deck. You might even want to keep your old Marchesa deck built and go head to head. Or not, Iâm not trying to tell you how to live your life.

What would a deck built around the new Marchesa look like? Is it premature to brew before we know what the entire set is going to look like? Maybe, but itâs not like we canât hot swap some cards later as theyâre revealed. Besides, Iâm champing at the bit to brew, so letâs do it already.

This is a basic Zurgo Helmsmasher shell and I even threw Zurgo into the 99. No Assault Suit shenanigans here, though. We are managing our attackers and blockers a little bit more carefully. This is an aggressive deck and can function as Marchesa Voltron. That might not be a bad way to go since cards like Swiftfoot Boots and Sword of Light and Shadow can go a long way toward keeping Marchesa alive.

Yes, I basically included Kaya for flavor reasons but her ability to blink Marchesa, Knights of the Black Rose et al is not insignificant. Even blinking Godo, Bandit Warlord or Stonehewer Giant seems worth it. She also has other abilities, and if youâre trying to win a damage race, getting a few life back never hurts.

I included all of the relevant new cards that are spoiled so far, but it should be obvious if anything that comes out subsequently has a spot in the deck. We aim to attack our opponents so we can become The Monarch again if we lose the designation and revel in the extra cards. The equipment in the deck means if we get deathtouch creatures from opponents being The Monarch, theyâll have a profound effect on the battlefield.

What do we think? Is this too cute or can you do some work with this build? Would you expand the Sunforger board? Go tribal? Add more wraths or add Ghostly Prison? Leave it in the comments section. Check back here next week for more previewed goodness. Until then!