We don't HAVE to build Kadena, and I'm not even going to try and tell you that you are better of running Kadena than Animar. I had an Animorphs deck and it was pretty linear. I ran a Food Chain in it. It was not 75% and that's why you never heard of it. It was pretty consistent and by consistent, I mean linear. Consistency is something that a large subset of the population strives for, because 60-card Magic teaches us that we want consistency. When I'm playing for prizes, you can find me paying Blue mana for spells like Brainstorm in Legacy, Sleight of Hand in Modern and Hydroid Krasis in Standard. When I sleeve up a Commander deck, there are no prizes and I can take a look at Kadena and instead of saying "behold, a bad Animar" I can say "Is there a reason to play Black in a Morph deck?" and since the answer is a resounding "sure," I can take a look at how I'd do it. I'm not building a bad Animar deck, I'm building a good Kadena deck. I think they're more different than you think.

How Does Animar Win?

Animar, Soul of Elements decks started running Morph creatures a few years ago because everything could be played for free when Animar had 3 +1/+1 counters. Animar reduces the mana cost of creatures and that includes alternate costs like playing a Morph creature face-down. You want Pickles lock (Brine Elemental and Vesuvan Shapeshifter, making each opponent skip their next untap step every turn)? You got it. Infinite bounces with Cloudstone Curio? That's in there. Draw your whole deck with Ancestral Statue and Primordial Sage? PART OF IT. Animar decks with Morph creatures (nicknamed Animorphs by some) dump their hand of Morph creatures, keep the hand full with Glimpse of Nature effects and find the card they need to get the job done. Animar can get big enough to clock someone for 21 Commander damage easily, or generate an infinite number of Altar of the Brood triggers or Purphoros Triggers. There are a lot of ways a deck that can fairly easily generate infinite combos can win.

How is Kadena Different?

Kadena can't make all of your face-down creatures free like Animar can. There are, however, a few advantages. The first is that whenever you do play a Morph creature, you draw a card, which means you don't have to find Primordial Sage or Guardian Project. If you do find them, it's even better. Kadena also gives you access to Black which has quite a few spicy Morph creatures like Bane of the Living, Ebonblade Reaper, and Silumgar Assassin. Notice Kadena doesn't say "The first face-down creature spell you cast each of your turns costs 3 less to cast," it says "The first face-down creature spell you cast each turn costs 3 less to cast." This means if you can find a way to play a Morph creature on their turn, you can play it face-down for free. Here's a hint - I plan to play Morph creatures on their turn if I can. You're also going to draw cards when you Manifest, and this is manifestly a good thing. This gives us a reason to use Scroll of Fate, which is basically Illusionary Mask but, you know, affordable.

As long as we're Manifesting our cards, let's Manifest theirs and make some use of Thieving Amalgam. Our commander may not let us dump our hand, but Somberwald Sage and Intruder Alarm sure does and our commander keeps our hand full. We're playing a slightly different game with this deck than with Animar but we're also using Black cards which means we can play their spells. Face-down creatures are great with cards like Deadeye Navigator and Conjurer's Closet and so is Gonti, Lord of Luxury. Suddenly we're working with a shell that is good with the 75% cards we want to play. Den Protector is good with Bribery, Expropriate, and Praetor's Grasp. Skinthinner is good with Cloudstone Curio, a card we're playing for other reasons. Having ways to steal their cards and use them against them isn't something shoehorned into the deck to make it 75% - it's a major focus of the deck and all of those cards synergize with cards that make a Morph and Manifest deck work.

Finally, a bit of tech that I saw shared on Twitter by Emma Partlow. 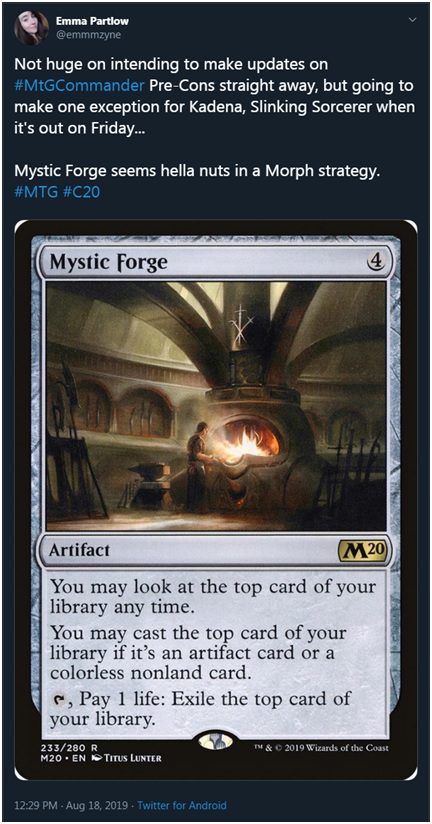 Well, that's a hell of a thing. Forge can join Vizier of the Menagerie in our value scheming. Our deck will run artifacts, too, so this is just too good in the deck.

What will this spicy pile look like once we take the core of a Kadena deck and pair it with the cards that will make our opponents rue the day they tried to kill us with creatures?

This plays a quite a bit differently from the Kadena lists I am seeing online. We have more creatures without morph than normal, and since some of them have ETB abilities, we'll have to do some work if they're manifested to benefit from them. Accordingly, we have a lot more ways to return creatures to our hands. That way we can get a free "gate" every player's turn by playing our free morph to trigger Equilibrium or Cloudstone Curio to rebuy our handful of ETB creatures which all do something important.

If you want more ETB creatures, you can add Panharmonicon and cards like Sower of Temptation. Bounce them at will and replay them for value. You can cut morph creatures to make room but I wouldn't recommend it - we've got a bit of a skeleton crew as it is.

I think it's worth it to change the way the deck plays because re-buying Ghastly Conscription or Expropriate can win the game. Add a Rise of the Dark Realms if you want to really get there. Cryptolith Rite may be helpful if you're going to increase the average mana cost. I didn't end up finding room for Intruder Alarm so you're going to have to rely on Seedborn Muse and Leyline of Anticipation to help you dump your hand in a turn cycle, but you're not so much filling the board with face-down creatures with this build. Instead, you're casting free spells to dig for a big spell which you will then keep re-buying or an ETB creature that you can blink and bounce for value. Being able to flip up Morphed and Manifested creatures is still easy with this build but you're also adding another dimension and getting good use out of your commander's second ability.

What do we think? Needlessly complex? Too close to a stock list? Not close enough? Too many or not enough cards? Let me know in the comments section. As always, it's been a blast coming up with ways to turn their own cards against them and I look forward to maybe teaching you a few things you didn't know (like I had no idea Mystic Forge was quite so spicy and I even like that card). Until next time!