Today I want to do something a little bit different and talk about modular cards and why I think they're so important, both as a builder in general and as a 75% builder specifically. That is, to the extent that I can even separate those two things - 75% grew from me just documenting the way I built intuitively and didn't really take on a life of its own until I got feedback from the community and did my best to remove my biases. Modular cards essentially occupy two spots in the deck by virtue of having different effects depending on which mode you elect to play, but this isn't free. In general, a modular card will either have kicker, cost more mana than a non-modular card that has either of those modes or will be a little more restrictive, narrowing your choice of targets in exchange for having more possible effects on the same card. Dedicated readers of this column will be aware that I advocate playing modular cards quite often and since the fact that you pay some sort of premium for the added flexibility is both fair and obvious, I have never specifically addressed the point of whether modular cards are worth the mana. I have always framed the argument around whether they're worth a spot in your deck - how could it not be worth it to have 100 cards in your deck rather than 99? If we accept my premise that a modular card is worth the inclusion slot, a defined, finite resource, we are forced to grapple with the issue of whether a modular card is worth the mana. Recently, Dana Roach took to Twitter to ask that question, but he did it by asking whether most modular cards are modular cards at all. 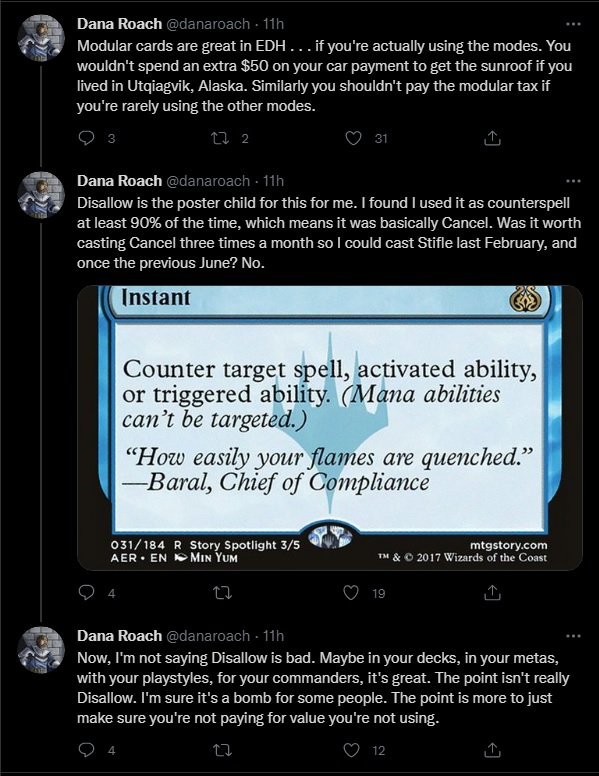 I took exception with Dana's framing of this question, and it took me a bit of noodling to come up with exactly why. Don't get me wrong, if you're not getting full value out of a card, you should swap it out for something else, but I maintain that it is impossible not to get value of a modular card by sheer virtue of the access to increased utility should you want it. Years ago, when I first started getting serious about tournament play, I would test new decks by putting slips of paper in my sleeves with the names of two cards on them and the card I needed at the time I played it was the card I used, and I made a note of how many times I played each card to determine which card got the slot. Modular cards allow you to do essentially that, legally, at the cost of mere mana. While we have a bit more real estate in a 60 maindeck slot, 1-of format than a 40 maindeck slot, 4-of format, anyone who has ever tried to cut a deck down from 112 cards will tell you that real estate still has quite a bit of value in Commander. A card doing double duty is always worth it, especially if the modular card is very similar to a card that is just either mode.

I think it's a mistake to look at Disallow as a Cancel that can Stifle rather than a Stifle that can Cancel, but I think that's a fairly minor gripe in the grand scheme of things. That said, how you frame cards mentally can impact when you think the card should be played and how. Is Rakdos Charm a Shatter that can sometimes kill the tokens player in a pinch or is it a huge source of damage that can Shatter in a pinch? Is it a Tormod's Crypt that sits in your hand waiting for the right moment to wipe a yard that's used to Shatter as a last resort? I suppose that depends on the deck, but getting too locked into a "main mode" mentality can make you get bored with a card the way Dana seems to be bored by Disallow. After all, he views Disallow as a Cancel and the dude does NOT like Cancel. And, yes, Cancel is a card people shouldn't run as much as they are given the better alternatives to the card, but even if you play Disallow as a Cancel 99% of the time, it is still better than a Cancel and I maintain it's still better than a Counterspell. This is because you playing a card as a Cancel all the time doesn't change the fact that it is a Stifle when you need a Stifle not to lose the game.

So, the crux of the argument comes down to what you value, and Dana seems to value playing a cheaper card if you're not using your modular card modularly, and I value the flexibility. If I only ever use a Disallow as a Cancel, it's because every time I had a choice how to use the spell, I wanted to use it as a Cancel, and using a modular card that exact way you want to use it is the value in running a modular card. Dana is making the argument that you need to be honest with yourself about how you're going to use the card and run something that costs less mana if the card is a Cancel in all ways besides its name. Saving the mana is important - keeping three mana up across three turns is even tougher than keeping three mana up across one turn and it's why people usually run cards that are "worse" than Counterspell in that they are narrower (counter target noncreature spell or counter target spell unless its controller pays 3 mana) rather than more expensive mana-wise. The mana really matters in 60 card formats where you'll typically end the game at a turn number where EDH players are still playing ramp spells. I maintain in a format awash with mana rocks, cards like Sapphire Medallion, and most importantly, treasure tokens, the extra mana is fine, and nearly negligible. Treasure tokens are the ultimate security blanket and with more and more cards generating them lately, even in Mono-Blue decks, you can afford to play more expensive spells that have increased utility rather than playing less expensive spells with less utility. If I wanted to agonize over whether keeping up three mana was impossible, I'd go play Legacy where Counterspells cost 0 mana.

It's a pretty extreme viewpoint to say that the extra mana literally doesn't matter, and that might be the biggest exception I take with what is a fairly reasonable argument - you're forced to take a fairly extreme stance to argue against it. Do I enjoy being forced to maintain that the extra mana doesn't matter? Again, let's be clear, Dana's argument isn't that modular cards are not worth running or that they're bad, his argument is that if you're not using the other half ever, you should assess whether it's worth running the modular card. It's, as I said, very reasonable. He wasn't inviting anyone to disagree with him. So why did I? Simply put, his tweet made me realize how extreme my own position was. It turns out I AM comfortable saying that I will pay an extra mana 10 times out of 10 because I value the added security that I get from knowing that additional utility is there. It's not that I wouldn't run Cancel because a generic, 3-mana counter is bad, it's that I likely wouldn't run Stifle by itself in Commander and playing this particular Cancel in my deck gives me access to Stifle, a card I might not ordinarily run. Stifle isn't that exciting in Commander but when you need a Stifle, you'll be very glad you have something that does a halfway decent impression of a Stifle.

It may seem like Dana and I are both beating up on Disallow and there's a good reason for that. In Dana's case, Disallow was the card that made him realize "Oh my god, I'm running a Cancel - I have become the very thing I FAMOUSLY RAILED AGAINST" and in my case, if you can make the argument for a card that is so clunky and so almost-always-just-a-Cancel that it made Dana reframe how he thought about modular cards entirely, the argument for better modular cards makes itself. We brought up Rakdos Charm earlier, for example, and while it's much easier to make the case for a card that has the same Mana Value as Shatter and has 2 additional modes, doing so feels a bit like cheating. If you agree that you're not bothered by the extra mana in the spell "basically Cancel," then it makes a card like Tale's End all the more attractive.

If mana is your concern and you're willing to sacrifice a little bit of your effectiveness in the service of saving on mana, there are options for you that don't require you to abandon your goal of playing two cards in one sleeve. Tale's End has the added benefit of helping you look at it as a Stifle with counterspelling abilities rather than a counterspell that can Stifle. It's no Voidslime, but the mana works way better.

Should we be overly concerned with not paying for value we're not using? I don't think so, actually. In a format where the spell's mana value means less because of how slow the game gets started and how much mana is available, the ability to respond to a wide array of threats with only one copy of a given answer in your deck puts a premium on modular cards. Is it worth it to pay extra mana? I maintain that it is. Should you replace a modular card with a less expensive, non-modular version of one of the effects if you find yourself always casting that part of the modular card? Perhaps controversially, I think you should not. The flexibility is more important and the mana is less important than in other formats. Anyone who has ever used a Desertion to counter a Wrath or used a Voidslime to stop a combo will tell you that if you have that extra mode, you'll eventually use it. Jam the dumb modular card in your deck, pay the extra mana and don't ignore cheaper, more focused alternatives if they exist.

That does it for me, readers. Join me next week where I'll pick another fight with someone who doesn't see it coming, and check out Dana's rebuttal to this piece tomorrow on Commander's Herald. Until next time!