Welcome back, lore fans! After six months of weekly content, I needed a hiatus! While it's unlikely that I'll be quite so productive in the future (being a stay-at-home dad had its perks!), I'll definitely have things to say about every set that rolls through. That said, Kaldheim is a new plane with three worldbuilding articles already published, and there's not a ton left for me to say about the world itself when these exist:

Kaldheim is the kind of plane I wish we had gotten during the block cycle. Each of the realms is ripe for expanding on, and I hope we see a return soon. With all of that said, let's dive into my flavor gems for Kaldheim!

There are two cold=biting puns on this card, with Frost Bite and Nippy. TWO! Someone let this happen, and they deserve a medal. Also, the expedition leader's name is Leidurr, which is yet another pun. This is the greatest card in the set. 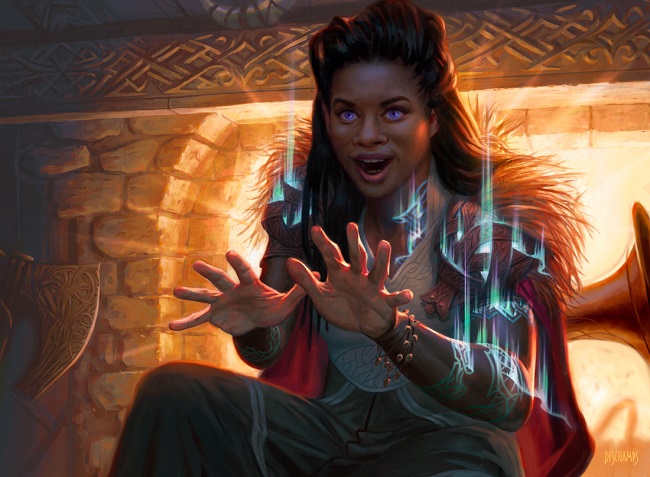 While I was happy to talk about Greek Myths with Theros, I'm afraid to say my knowledge of Norse Myth is pretty much limited to various Beowulf retellings, the TV show Vikings, and pop culture interpretations like Marvel's Thor and Assassin's Creed: Valhalla. That said, our own Kendra Smith wrote a great article on The Mythology Behind Kaldheim, and so I won't try to expand beyond that here.

The Gods of Kaldheim 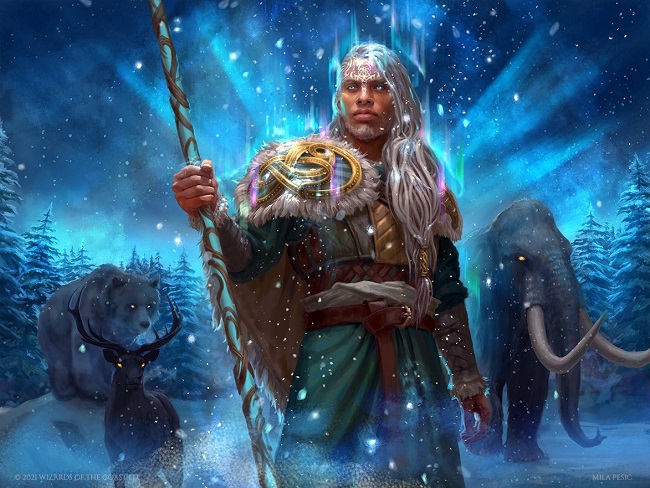 Blessing of Frost by Mila Pesic

I want to start today by saying I really like the direction the gods took in Kaldheim. While in Greek and Egyptian myths, the gods tend to be immortals set apart from humanity, in Norse myths they are not. Making them 'special' by making them the modal double-faced cards in the set? That's a nice move. I also love the aurora effect applied to the gods, and anything made of Tyrite (the sap of the World Tree).

I've seen some people say that these gods don't feel 'like gods', which is fair when you're comparing them to other cards with the god creature type, but the flavor of ageless, but not immortal, gods who must drink of the Cosmos Elixir to maintain their powers is a lot of fun, to me. I don't think every god is a slam dunk, but taken as a whole they're all pretty great.

One of the biggest questions for Kaldheim, especially as previews began just a day after an insurrection at the US capitol where white-supremacist appropriated norse symbols were prominently on display, is how the setting would distinguish itself in such a way as to avoid the elements of norse culture that have been appropriated by racist groups.

The answer is apparent from the gods on down. Kaldheim is (from a real-world perspective) a multiethnic plane, with a range of skin tones among the people, elves, and gods of the plane.

Avalanche Caller and [Not] Marit Lage 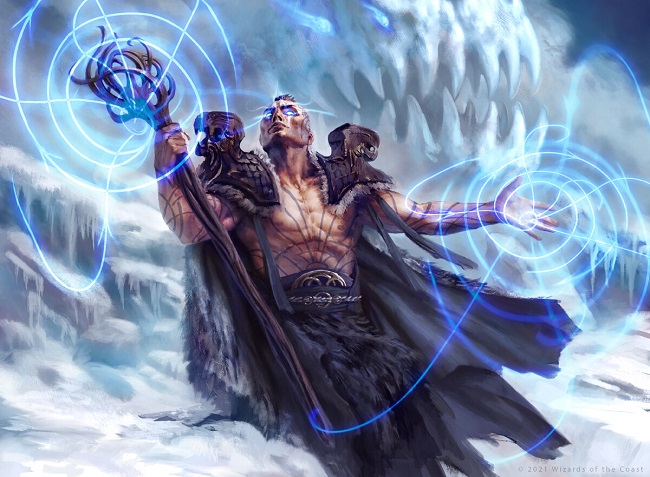 To put it plainly: this is not Marit Lage. It's a cute art easter egg, and one that I feel is appropriate given the similarities between the norse-inspired Ice Age block from which Marit Lage originates and Kaldheim. 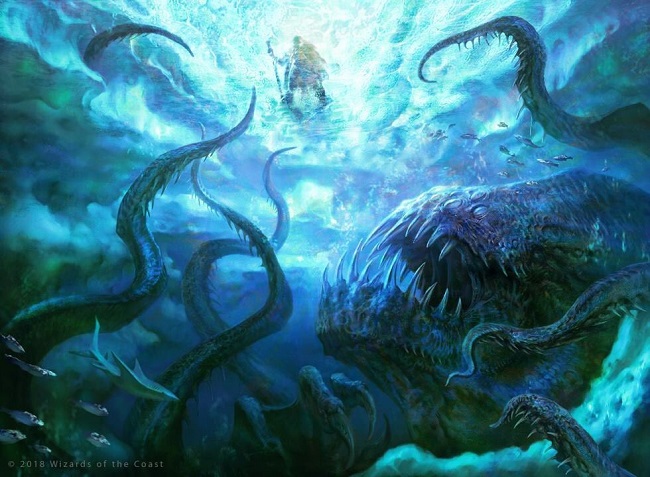 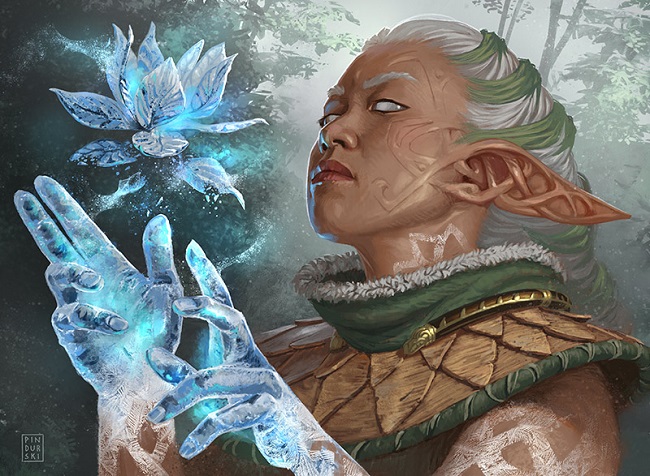 Every Magic plane looks for unique ways to distinguish the characteristic non-humans in the same way they try to distinguish the visual feel of each setting. Kaldheim's unique look comes from the sundog of Starnheim and the branches of the World Tree in the background of much of its artwork. The elves in Kaldheim are distinguished by their knotwork ears, a cute motif taken from real-world norse and celtic symbolism and applied here as symbolic of the branches of the world tree intertwining.

Kaldheim's Valkyries are third kind of angel in the multiversal that are (at least in part) born from the spirits of worthy mortals. Before now, angels from both Serra (the planeswalker) and Alara have lore associated with them that imply spirits become angels. With Ascent of the Worthy and Ascendant Spirit, we're given the implication that the same is true on Kaldheim!

I love sagas. I've written whole articles on sagas. Unfortunately, I'm not going to be able to get to every saga this time around, so let's do a lightning round.

Binding the Old Gods, Firja's Retribution - Wood carvings are great for this setting.

Harald Unites the Elves - A carved shield telling a story is great flavor.

The Bloodsky Massacre - The use of tattoos to tell a story is perfect viking flavor.

The Three Seasons - The stone relief here, complete with the line between each block of quarried stone that also matches the phases of the saga? Legit.

The Trickster-God's Heist - It's fun having an illuminated scroll here.

Waking the Trolls - This ice etching is clever and fun. 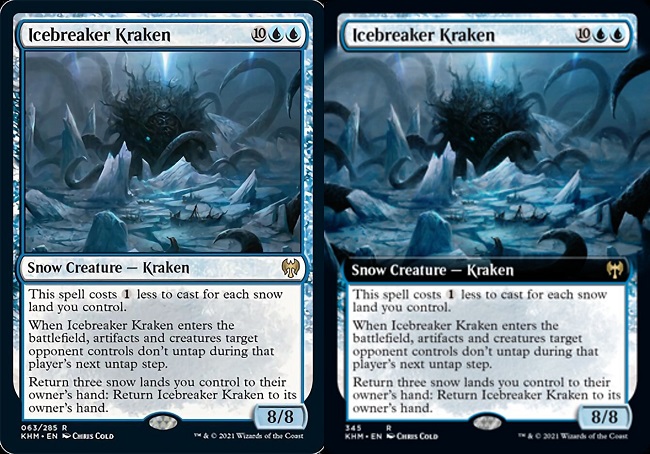 I'm not generally a fan of the extended art frames. I've never particularly liked them, but I have to give credit where it's due, they've fixed a major issue I had with them: the zoom and crop. Previous versions of the extended frames filled the extra space by magnifying the piece and cropping the art differently to fit. This resulted in making the art look 'magnified' when compared to the regular frame.

Kaldheim appears to be the first set where the artwork for the new extended frames must have been commissioned for the wider format. As you can see above, the Kraken doesn't get any bigger, the extended art merely 'reveals' additional artwork. I suspect this because, given the different time frames involved in designing new frames (an in-house graphic design challenge) and commissioning new artwork with wider dimensions (a long-term, mostly outsourced process). I supposed I could just ask... but where's the fun in that? 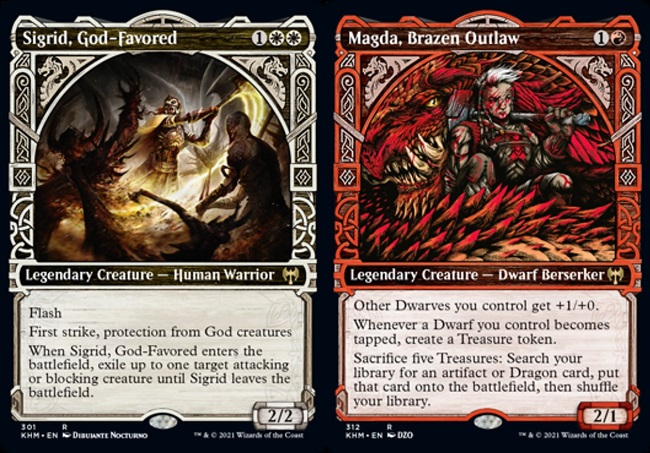 I really love the idea of showcases, but I've rarely found a showcase to be superior to just giving us a borderless version of a card. I've commented on this for basically every flavor gems article over the last year. These showcases have to be evaluated on two fronts: the art style, and the frame style. I love the frame, here. Going for a norse-inspired wood relief was a great move, and these frames all look gorgeous.

That said, the artwork is pretty hit-or-miss for me. In some cases, it appears to be going for a Heavy Metal vibe, with sketchy, mono- or bi-chromatic illustrations that would make for an excellent album cover. Others seem similar to Ikoria: Lair of the Behemoth's excellent comic-inspired pieces. This isn't a bad thing, but it doesn't quite feel as cohesive as, say, Theros: Beyond Death or Zendikar Rising's showcases, which I currently consider the best so far. Then again, Theros and Zendikar also had many fewer showcases than the others. 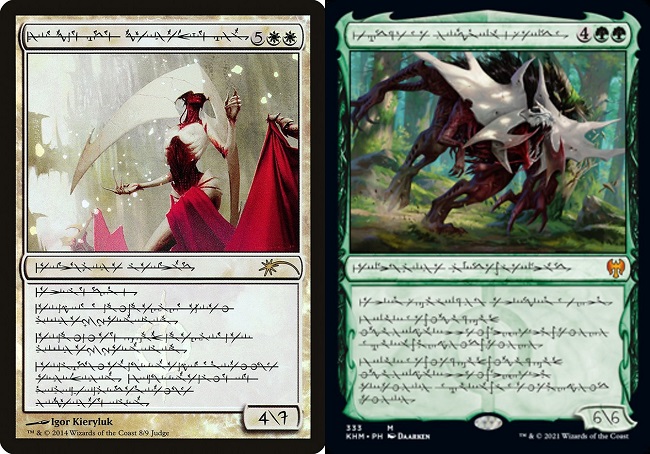 I'll be honest with you, most of the time these alternate border cards aren't for me. But the "Phyrexian Showcase" is just about perfect. Reminiscent of the 2014 Judge Promo for Elesh Norn, Grand Cenobite (pictured above), it translates the card into the Phyrexian language using Phyrexian script. It's not just gibberish, it's an actual language used by Wizards of the Coast for things like this, and while the language has been partially cracked, I'm sure an entirely new card will help that effort.

Adding the Phyrexian creature type is fantastic, and something Magic fans have wanted for decades. I'm very curious to see how it gets applied going forward; I imagine every Phyrexian without a 'race' subtype will get one, but will they change an existing type to make room for it elsewhere? We'll have to see.

That's it for this week! Join me next time as I pull together some reading materials for those you who want to know more about Vorinclex and New Phyrexia!