Welcome back, Lore Seekers! Last time, I caught you up on the events of the The Wildered Quest, the Throne of Eldraine novella. Today we're going to be talking about Sundered Bond, the novella by Django Wexler that covered the story of Ikoria: Lair of the Behemoths. Since we're over a year out and Lukka, Coppercoat Outcast is returning for the story of Strixhaven: School of Mages, I thought it time to cover the novella with a summary! 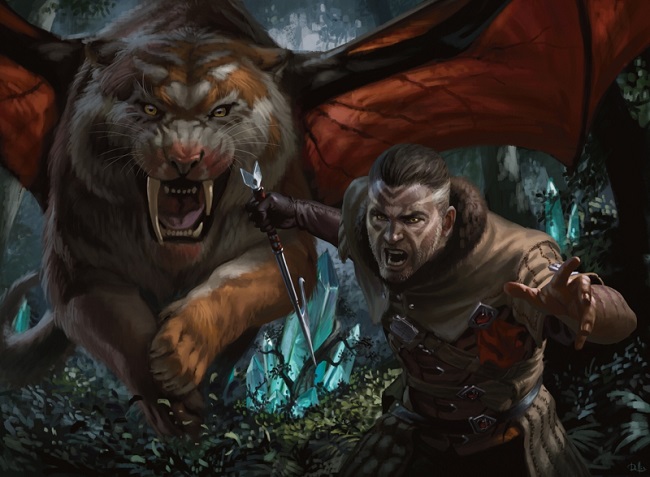 Go for Blood by Chris Rallis

The story begins with Lukka hunting a nightmare monster that had made its way into the city of Drannith's fourth ring. Lukka, the leader of a squad of special forces monster hunters, is dispatched to bring it down, and his team does so successfully. He returns home to spend some leave time with his fiance, Jirina Kudro, the daughter of the military leader General Kudro of Drannith. Their time together is sadly cut short as they receive word of another monster having made it even farther into the city's defensive rings. Lukka and his team head out to fight the winged cat monster, but there's something different about it. The cat monster slaughters most of Lukka's squad, and before it can kill him he inadvertently bonds with the monster before passing out.

Bonders, people who form a magical bond with the monsters, are outcasts across the plane due to the inhabitants' fear of monsters. When Lukka wakes up, it's clear the General knows what he has become, and Lukka is ordered to be imprisoned. Jirina and Lukka orchestrate an escape, with Lukka pretending to use his fiance as a hostage. As he makes his way out of the city, he's almost caught when a mysterious stranger arrives to aid him: Vivien Reid. Back in the city, Jirina is ordered to capture her fiance to prove her loyalty, and saddles a band of vicious mercenary poachers to keep Lukka's bonding a secret.

As Lukka and Vivien travel together, we learn Vivien had come to Ikoria to learn about the crystals that have caused the monster mutations on the plane. Lukka, wanting to know what has happened to him, agrees to help... but it becomes apparent they have very different ideas of what this mission means. Lukka wants to use monsters as a weapon against other monsters, while Vivien wants to stop whoever is causing so many monsters to become more aggressive recently. Nowhere is their attitude more opposed than when they're attacked by another monster, only for Vivien to wound it and escape rather than slaughtering it. She believes she only needs to do what's necessary to defend herself, while Lukka wants to kill the creature outright. The cat monster returns to Lukka, and through his bond he learns that a mysterious crystal formation called The Ozolith is responsible for the creature's rampage. 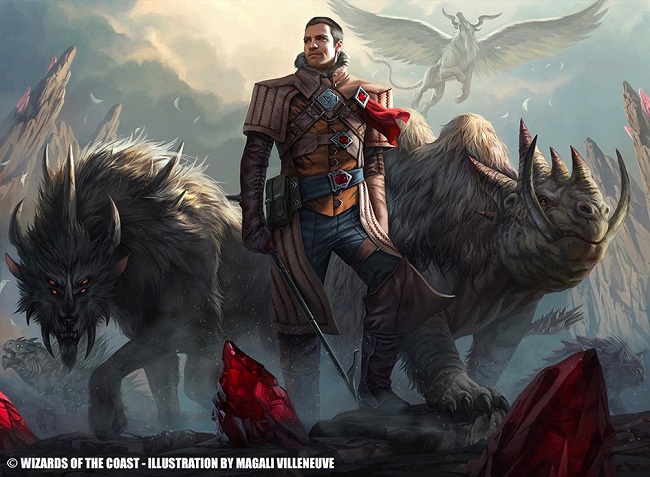 Weaponize the Monsters by Magali Villeneuve

Before they can investigate this new development, Jirina's crew arrives and they're forced to escape. Jirina and the poaches leave on their airship and travel to the floating city of Skysail to resupply (Narset of the Ancient Way makes a brief cameo here). On the path to the Ozolith, Lukka and Vivien encounter a small community of bonders who agree to help them destroy the Ozolith. Vivien reveals her nature as a planeswalker, and warns them that she believes another planeswalker is behind whatever is happening with the Ozolith.

Lukka and Vivien bond over the loss of their homes, although Vivien doesn't realize at the time that Lukka has taken quite a different message from her story about the destruction of Skalla than she intended. Lukka vows that such a loss will never happen to him, and he'll do whatever it takes to stop it. As they battle through nightmare creatures attacking the Ozolith, Lukka and his cat monster head straight for the central crystal. Jirina's poachers arrive, and she orders them not to kill Lukka as the battle suddenly becomes a three-way struggle.

Having reached the Ozolith, Lukka is able to communicate with the intelligence behind the crystal. This being leads Lukka along, deflecting all of his questions and insisting it is merely an interested party. The being tells Lukka that the crystal could supply whatever he needs, but that Lukka has to be the one to ask for it. Surveying the battlefield as his bonder allies are slaughtered between the nightmares and the poachers, Lukka demands power. Power to crush his enemies and return home. 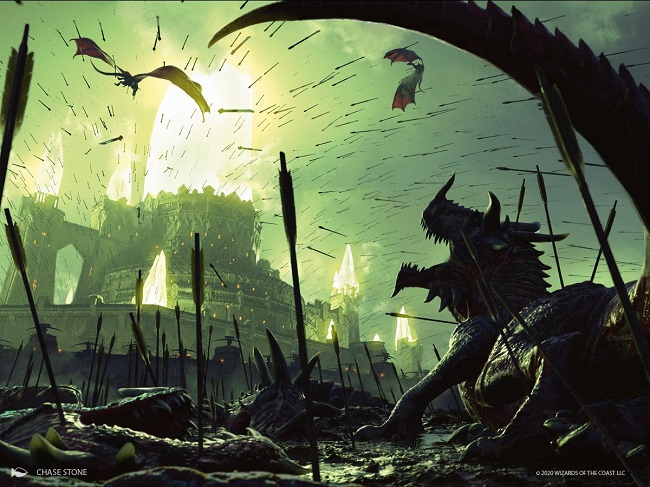 The Ozolith explodes with energy, and the nightmares are suddenly under Lukka's control. He destroys the poachers and their skyship, but his cat monster saves Jirina and flees the nascent planeswalker's megalomania. Lukka announces to the remaining bonders that he plans to build a monster army to protect Drannith, whether they like it or not. Horrified, Vivien and the bonders escape their former ally. Back in Drannith, the cat monster is captured and Jirina is almost killed by the city's defenses. Her father, the general, insists on the execution of the cat monster to stave off rumors that she had turned traitor like her fiance. Unable to kill the cat that had saved her life, the creature is beheaded by Genderal Kudro.

Lukka, riding a massive creature at the head of a monster horde heading toward his home, feels the death of the cat monster as it happens. The city defenders, called Coppercoats, mobilize to meet Lukka's army outside of the city. The city walls were never designed to fight off such a large force and General Kudro fears it will irreparably damage the city walls. The General places his daughter under arrest, and brings her with him to have a card to play against Lukka. The General then tries to assassinate Lukka during a parley, but Lukka turns the tables and kills the old man, deciding that if his city won't welcome him back, he'll take it back by force.

Jirina is saved by Vivien and her bonder allies, who hope that Jirina will be more open to reason than her father. She rallies what's left of Drannith's forces alongside a small army of bonders to hold off Lukka's hordes. Jirina moves to confront Lukka, but it quickly becomes clear that Lukka is intent on wiping out anyone who disagrees with his methods. They manage to draw Lukka away from the bulk of his forces, and Vivien summons her spectral monstrosaur to subdue Lukka's monster. Enraged, Lukka calls upon more power from the Ozolith, to the point where even the being inside warns him it's a bad idea. Lukka ignores the voice, and the power overwhelms him and shatters the Ozolith crystals. His planeswalker spark ignites, and Lukka disappears. 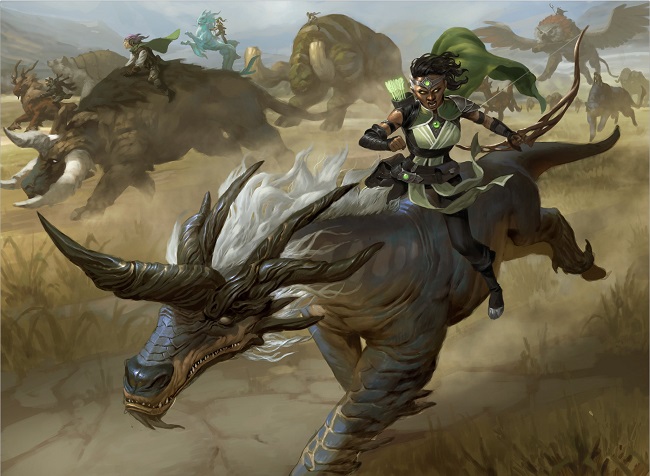 After the battle, in recognition of their aid, Bonders are allowed inside the outer rings of the city, and Jirina works to change the xenophobic population's "the only good monster is a dead monster" attitude. Jirina and Vivien say farewell, and Vivien tells her that Lukka was not killed, but is now a planeswalker. Jirina is sorry it came to this, but doesn't regret her actions in opposing Lukka at the end. She asks Vivien to convey that to him, if their paths ever cross again.

That's enough summaries for this week! Next time I'll be tackling the Flavor Gems of Strixhaven!