Welcome back, lore seekers. I had thought I was going to take a break after Modern Horizons 2, but the Phyrexian creature type errata drew me back in! Phyrexians have been around in Magic for a long time, with the earliest mention being in the set Antiquities way back in 1994. Despite being around for such a long time, the Phyrexians themselves never received a creature type until Vorinclex, Monstrous Raider in Kaldheim.

The History of the Phyrexian Creature Type 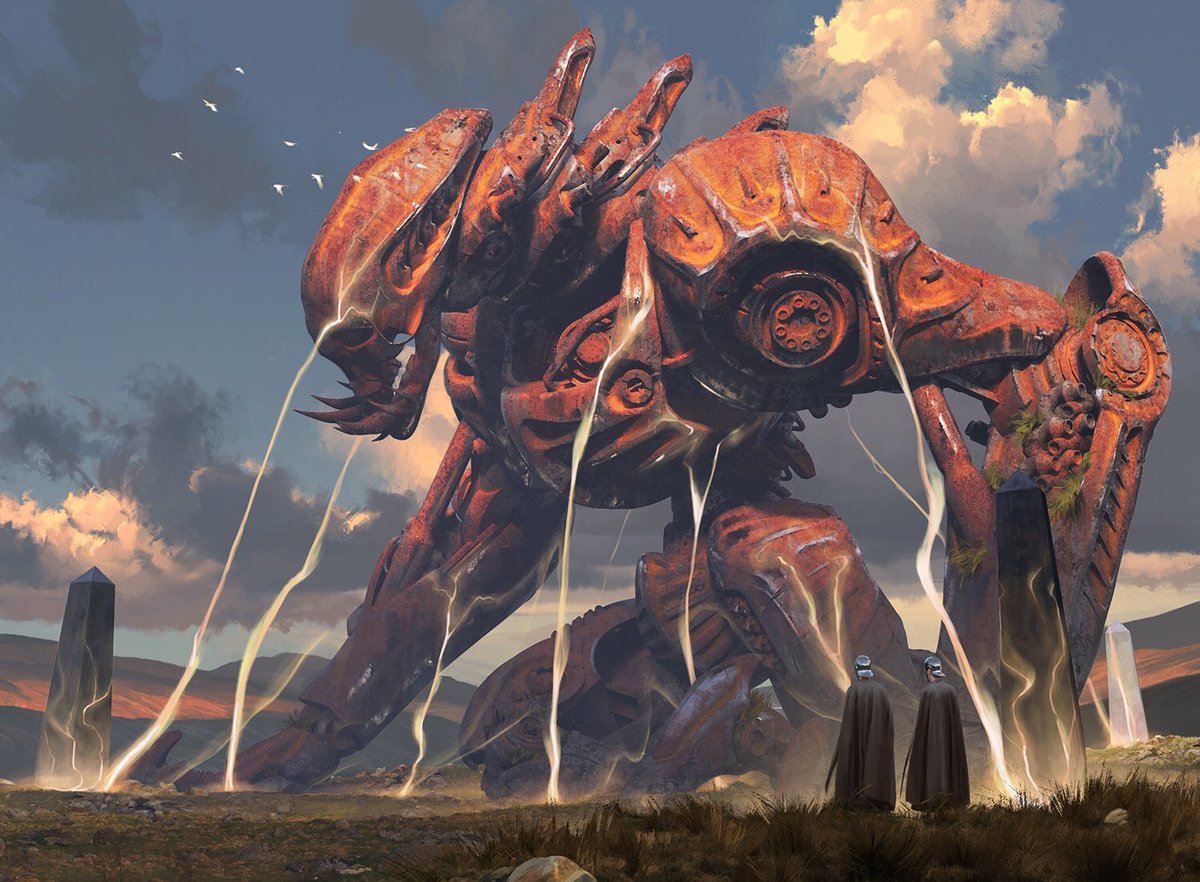 Seal Away by Joseph Meehan

If the Phyrexians were so important to Magic history, why are they only receiving their own creature type some 27 years after their first appearance? Well, over a decade ago, Doug Beyer laid out the reasoning why "Phyrexian" was denoted by a lack of a "race" type during the Scars of Mirrodin block.

Frankly, Phyrexia is hell on the creature type system. One man's Horror is another woman's Construct is a third person's Insect Zombie Thopter. Phyrexia is explicitly a mishmash of vat-grown flesh and engineered metal, sinew wrapped around rotors, buffered by undead tissue and shot through with viral oil. The artifact/nonartifact boundary is already blurry, and creature type boundaries even more so.

-Doug Beyer, Getting to Know the Praetors

If you take a look at all the cards that have the Phyrexian Creature type, you can absolutely see where he's coming from. While the broad "anything with a Phyrexian watermark" could work for Scars of Mirrodin, there are just so many weird pseudo-Phyrexians early on that it's difficult to sort them out. I'll talk about the choices made on that front in a moment. First, let's look at what their solution to the type problem was.

Oftentimes there just isn't a race type that properly captures what's going on in the art of those guys. In Phyrexia, your role determines most of your identity anyway. What you do to advance the civilization of Phyrexia is much more important than what vat-grown or slag-harvested materials you're made from. The concept of a "species" is just more slippery here. So, some of those unclear Phyrexian creatures end up being just Clerics or Artificers - identified only by their role in the machine and not by the tattered remnants of their biological identities. We feel that it makes a strong, flavorful statement about the bizarre conditions of life on a Phyrexian plane.

-Doug Beyer, Getting to Know the Praetors

So, what changed? On Mark Rosewater's Blog, the answer was simple. Like any other big changes that R&D was resistant to for a long time, enough of those opposed are no longer there. So, let's dive into what actually constitutes a Phyrexian now.

I realized after finishing this article that there are some terms you might be unfamiliar with, so let's address these up front.

Compleat - A creature that has been 'perfected' through the fusion of artifice and flesh, usually in a horrific way. Compleation is the end goal for all Phyrexians.

Phyresis - The process of becoming a Phyrexian, either surgicially or mutagencially (through, for instance, Glistening Oil).

Phyrexian Oil/Glistening Oil - A semi-sentient mutagenic compound used as a vector for phyresis. 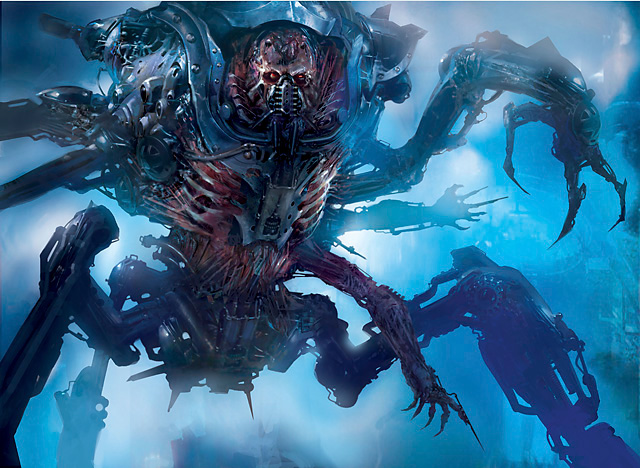 To understand the flavor implications of the Phyrexian type update, you first need to understand what Phyrexians have themselves considered Phyrexian over time. With New Phyrexia, it's relatively easy, basically anything with a Phyrexian watermark (or that would have one, had it been printed in a set that used it) is a Phyrexian. There are distinctions between vat-grown or core-born Phyrexians and compleated (or phyrexianized) Mirrans, but for the most part the prevailing "All will be one" philosophy makes it reasonable for all of those under Phyrexia's sway to be considered Phyrexian.

While I think that rationale works fine, I would have preferred a bit more targeted approach. Ultimately, it makes more sense to do it this way (at least until they need to fit "Phyrexian" onto some of those type lines in a reprint)... even if the flavor of a few cards makes me frown a little.

Old Phyrexia, however, is a different story. Under the original Phyrexia, there was a major distinction made between true Phyrexians and those who served Phyrexia. The challenge here is that the difference between "Phyrexian servant with mechanical modification" and "true Phyrexian" is difficult to convey at the card level. If someone isn't incredibly well versed in the lore, would they understand that Commander Greven il-Vec, with all of his mechanical modifications in a set full of Phyrexians isn't a 'true' Phyrexian himself? 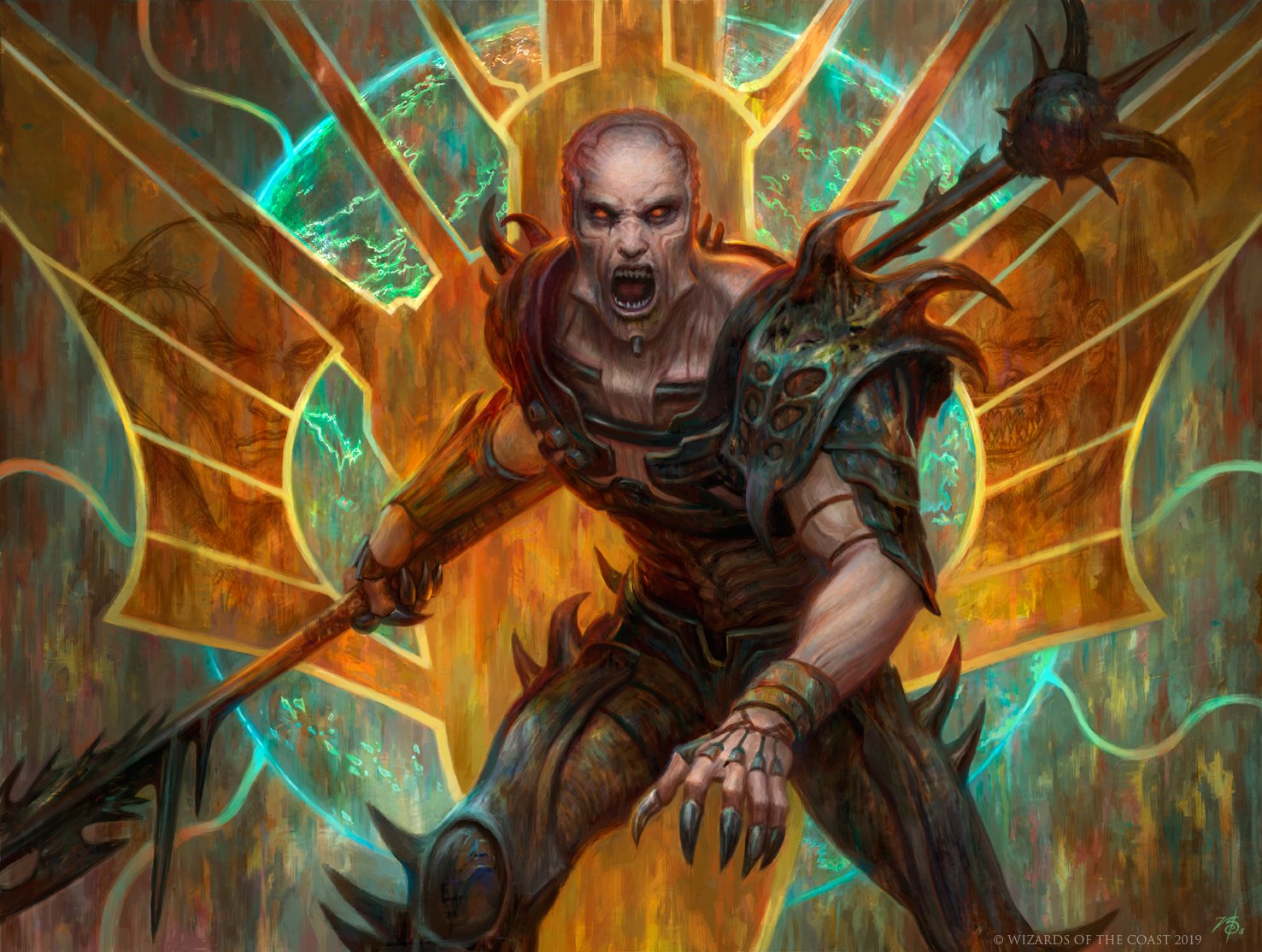 Looking through the list, and comparing to the non-Phyrexian Black and artifact creatures from the same sets, I think I see the rationale at work here. Here's my thinking.

Does it have a Phyrexian term in the name?

Much like with previous creature type updates, it makes sense that "Phyrexian [Noun]" is a Phyrexian. See also: Yawgmoth or various other Legendary Phyrexians.

Does it have a Phyrexian watermark?

While this might hit Mirrans in the early stages of phyresis (for instance, Tel-Jilad Fallen), it still makes sense here. Even if they're not a fully compleated Phyrexian, they're on team Phyrexia now. Selenia, Dark Angel qualifies in a similar way, she was under Phyrexian influence (you can see the oil tears of early Phyresis in her art).

Does it depict an archetypical Phyrexian?

There are quite a few 'standard' Phyrexians that we see over and over, so it makes sense to include them here. For instance, Hollow Dogs or Ravenous Skirge share designs with quite a few other cards.

Does it have mechanical modifications in a set with Phyrexian flavor?

This last one, I believe, accounts for the majority of odd corner cases. It explains why Priest of Gix is a Phyrexian, despite largely just being mechanically augmented servants of Gix and not true Phyrexians themselves. Or the sort-of Phyrexians of Rath, like Rathi Assassin (and the aforementioned Greven), who are mostly just enhanced slaves of 'real' Phyrexians. 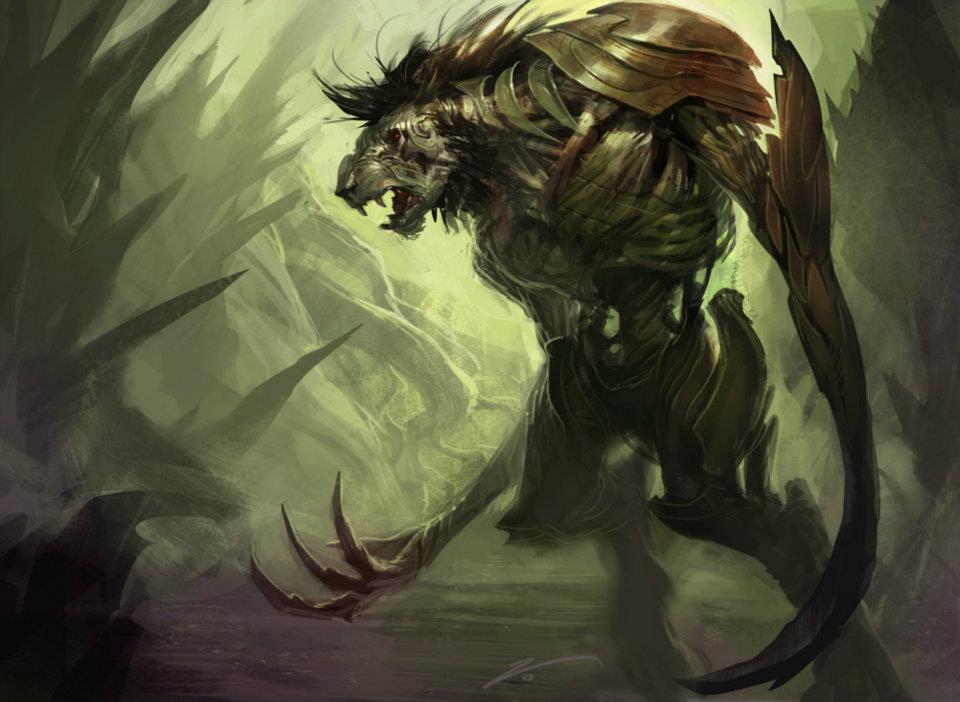 With those criteria in mind, I think this update still missed a few cards. A couple just seem like simple oversights easily fixed. Witch Engine is explicitly a Phyrexian war machine. Servant of Volrath is just as deserving as Volrath's Shapeshifter. Carrionette and Carrion Wall are animated by Volrath's black ooze in the Death Pits of Rath. All of these seem to fit within the flavoring of other cards.

Then there's the weird cases of Dragon Engine and Ramos, Dragon Engine. Dragon Engines are Phyrexian artifact creatures (they predate Yawgmoth's Phyrexian, but became Phyrexian regardless). Mishra steals a few from Phyrexia during the Brothers' War and then creates inferior copies, which is what Dragon Engine and Traxos, Scourge of Kroog represent. Ramos, however, is a true Dragon Engine (hence the type dragon rather than construct like the others) and should probably be a Phyrexian.

Henge Guardian is a sort-of Dragon Engine protected to guard Ramos. Does a Phyrexian creating something make that thing a Phyrexian? The type updates seem wishy-washy about that. What about copies of Phyrexian technology by non-Phyrexians? For instance, Dragon Engine doesn't count as Phyrexian because it's copy. Soldevi Steam Beast is a copy of Phyrexian war machines found under the city of Soldev in the Ice Age. What about Priest of Gix wannabes? Soldevi Adnates were wannabe Phyrexians, who had enhanced themselves with artifice. Many centuries later, Rona, Disciple of Gix also enhanced herself with artifice in a bid to use forbidden Phyrexian technology. While none of these are technically Phyrexian, if the type changes on some, it's worth looking at them again. 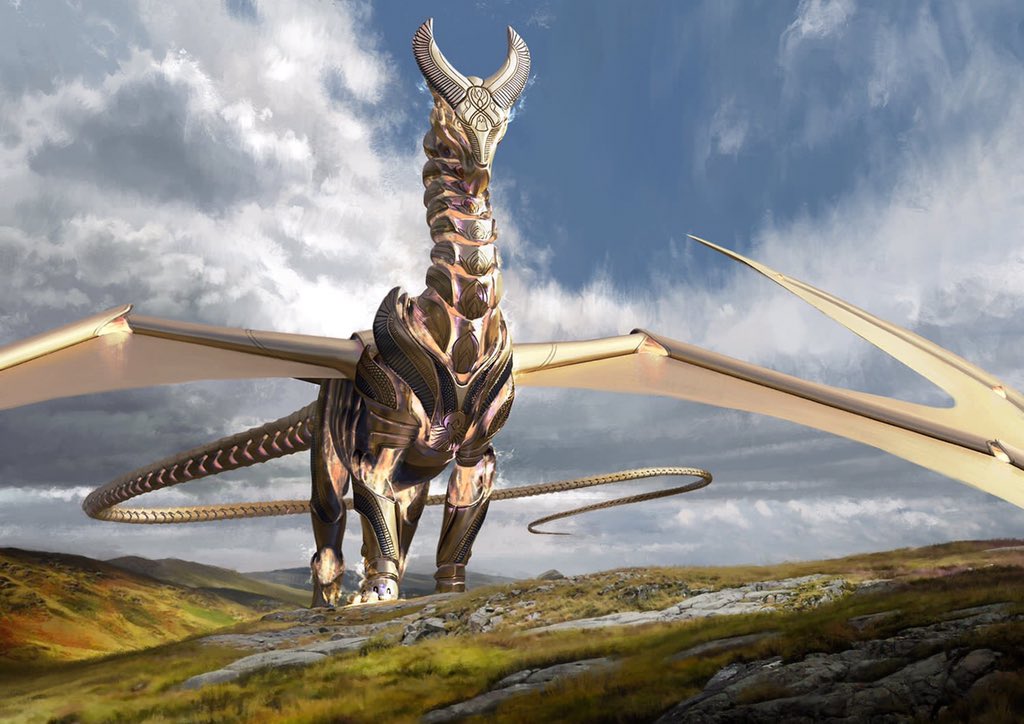 The unfortunate side effect of the Phyrexian type is that it makes some reprints awkward. Consecrated Sphinx is currently not a Phyrexian (it has two non-Phyrexian printings), but the original card had a Phyrexian watermark and was clearly phyrexianized. On the flip side, the Eastern Paladin and Western Paladin are Phyrexian in the art of their original printing, but not in their 7th Edition printing. I'm not sure how to cleanly delineate here, but I think a couple corner cases aren't a big deal.

There are also a couple strong "theorized but not confirmed cases". Greel, Mind Raker is a mysterious horror central to the Keldon Invasion of Jamuraa in Prophecy. Greel really feels like he should be an advance scout of Phyrexia, otherwise the entire Prophecy story feels like one big waste of time immediately before the 'real' invasion begins. Abomination of Llanowar is a 'dark necromancy' at the heart of Llanowar from centuries ago. Centuries ago was... the Phyrexian Invasion, who unleashed untold plagues on Llanowar. It might be cool to connect the two here.

That's it for this week! If I have time, I'll be back with a Forgotten Realms primer soon!