Welcome back, lore seekers! This week, I'm taking a look at the recently teased Dungeons and Dragons: Adventures in the Forgotten Realms set. If you're anything like me, you might only have had a passing interest in Dungeons and Dragons (colloquially known as DnD) lore. Or maybe you wanted to get into it, and then realized there's over 30 novels about the infamous Drizzt alone. Well, I dived down the DnD rabbit hole so that you don't have to.

DnD Lore Fans: This article isn't for you. It's probably going to be painful for you. I know that there is 50 years of Forgotten Realms lore, and that I'm going to be drastically oversimplifying the world for new audiences. And I probably don't understand everything myself. If you're a DnD nerd, and you continue past this anyway, and want to "well, actually" me, please understand in advance that I'm not going to read it. With that in mind, today I'm going to be talking about the kinds of places and things of very, very casual DnD fan might know about.

What is Dungeons and Dragons

Adventures in the Forgotten Realms Key Art by Magali Villeueve

Dungeons and Dragons is a tabletop roleplaying game, meaning the players each create a character using the DnD rules, and together with a 'dungeon master', roleplay their way through an epic campaign. But only if you control dark magic powerful enough to allow four or five adult's schedules to align on a regular basis. DnD has many different campaign settings, and encourages you to deviate from the established ones, but the most well-known of these settings is called The Forgotten Realms. It's the setting pretty much every spin-off property (like the video games) are based on, and similarly, it's the one this summer's Magic set is based on.

While the Forgotten Realms can technically refer to the entire cosmology of the setting, it is most often associated with the setting's core location: the continent of Faerun on the planet Toril. Even the official website uses the two names more-or-less interchangeably. There are a number of other continents on Toril, but we're going to focus on Faerun, as most of the locations you've probably heard of in DnD are from Faerun. And outside of The Sword Coast Adventurer's Guide (set in Faerun), there hasn't been an overarching Forgotten Realms sourcebook since 4th Edition - although there are plenty of adventures set there. While I'm sure the set will have DnD deep cuts, I also think that Wizards would want to focus on synergy with the things 5th Edition players will be familiar with already.

Like Magic, the Forgotten Realms features a multiverse with many planes, but the metaphysics of the two franchises' multiverses are very different. DnD's theoretical metaphysics have changed somewhat over time (and the guides themselves offer different models for the multiverse), but the basics are that there is a prime material plane, Inner Planes (where the various elemental forces reside), and Outer Planes (where more ethereal planes reside, based around the DnD alignments). There are also other material plane worlds out there. It's way more complicated than that, but explaining DnD cosmology is an article by itself. Travel between planes is possible through a variety of methods, including spells and notably a kind of airship called a Spelljammer. Magic's own Weatherlight is very clearly based on the design of a Spelljammer. Beings who can travel between these planes are likely going to be the 'planeswalkers' of the set, but note they do not have the planeswalker spark as Magic understands it. 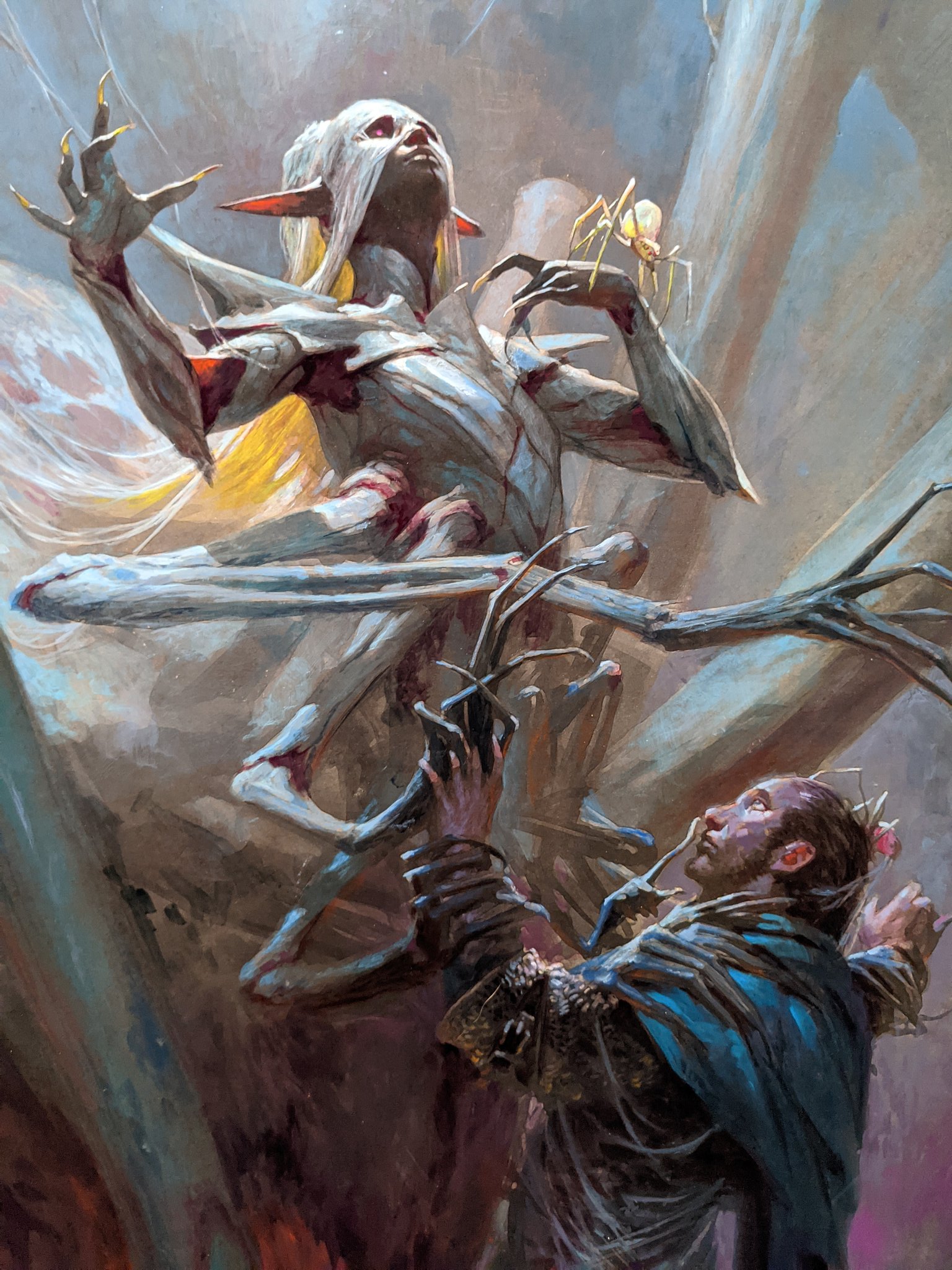 On Faerun, there are quite a few locations you may have heard of. These are the names of locations in 5th edition (or famous media of the past) that are big enough to be in the title of campaign guides. The city of Waterdeep is one of the most influential city states on the Sword Coast, with many campaigns crossing through its gates. One major notable feature of Waterdeep is the Undermountain, a massive dungeon that descends deep beneath the mountain for which Waterdeep is named. This city is featured in Waterdeep: Dragon Heist, and the Undermountain is the focus of Waterdeep: Dungeon of the Mad Mage. To the north of Waterdeep lies Neverwinter, the subject of the classic Neverwinter Nights games. It stands closer to the border of the far north, which I'll talk about shortly.

To the south of Waterdeep lies Baldur's Gate, the city I was most familiar with, and the subject of the renowned Baldur's Gate series of video games, including Baldur's Gate III, which is currently in early access. It's a rougher city than Waterdeep, and most of what I know about it surrounds the attempts of an evil god to resurrect himself there. I'm playing through the first two Baldur's Gate games on the Switch right now, so hopefully I'll have more to say if any of its characters make it into the set. These three cities: Waterdeep, Neverwinter, and Baldur's Gate, tend to be the most prominent in Forgotten Realms adventures. 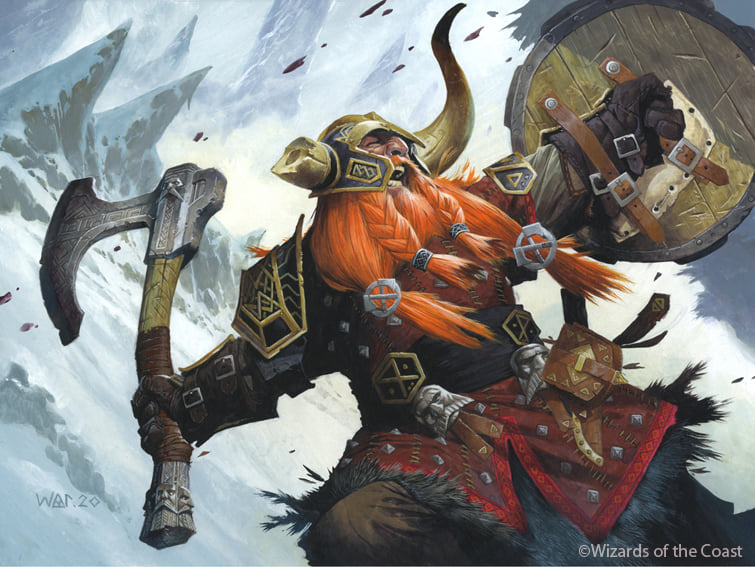 The last surface location I'm going to talk about here is Icewind Dale. The setting of the early adventures of Drizzt Do'Urden, which is retold in part through the Dark Alliance series of video games, including the upcoming Dungeons and Dragons: Dark Alliance. Drizz't himslef hails from the last major location I'm going to talk about today: the Underdark.

The Underdark is a similar concept to Ravnica's Undercity: it's a massive network of underground caves, tunnels, and chasms that link together into an entire world below the surface. All sorts of weird and unique stuff in DnD either comes from there or calls it home.

There's WAY more than these locations, but these are the ones that I, as someone not particularly invested in DnD, know about, which means they're probably some of the highest profile spots in the Forgotten Realms. 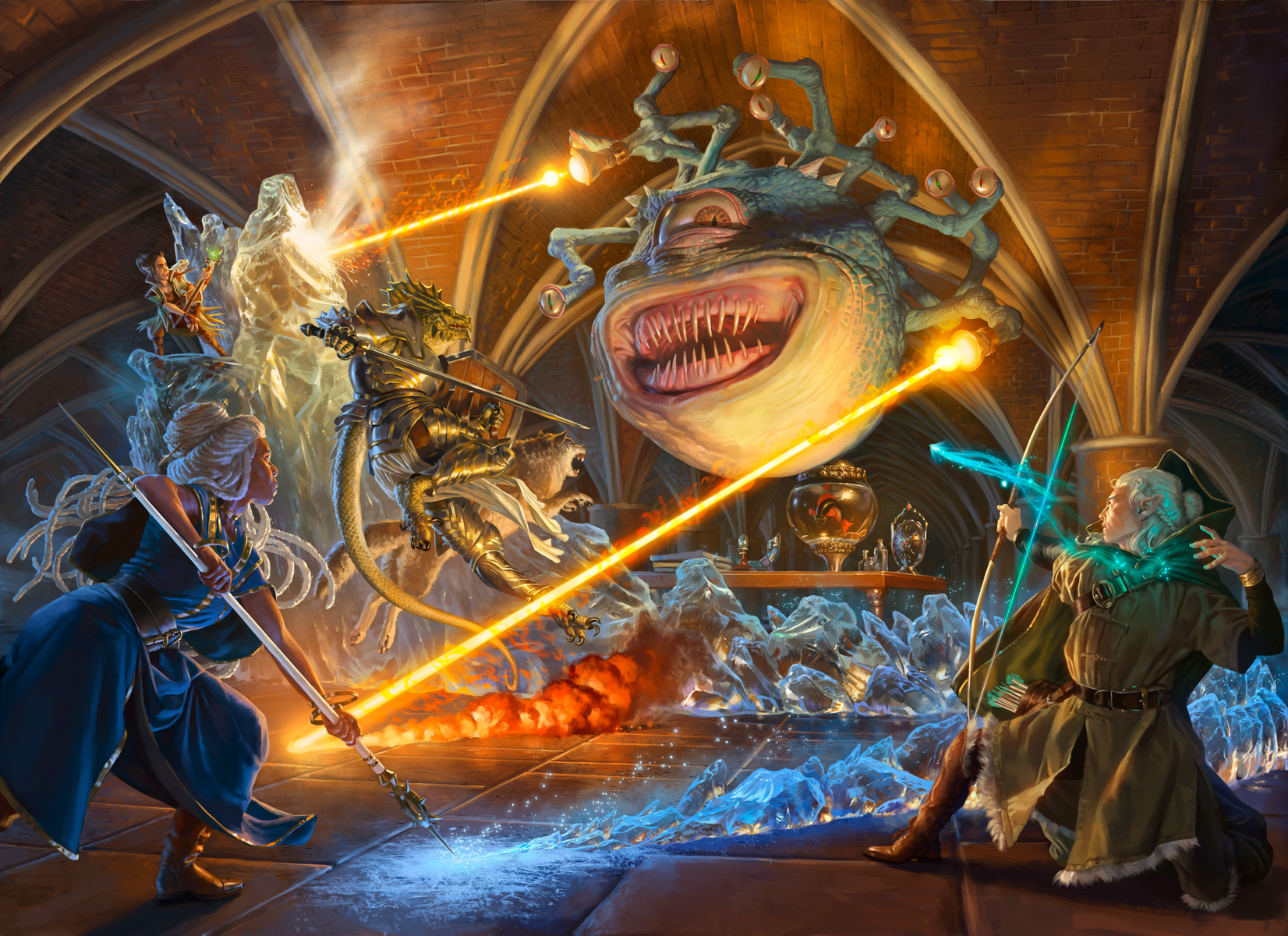 Adventures in the Forgotten Realms Key Art by Jason Rainville

While you're probably familiar with or would immediately recognize most creatures in Dungeons and Dragons, there are a few cool and unique ones I'd like to mention before I close out here. The first is the Beholder, pictured above. This iconic creature is pretty unique to DnD, and can often be found in the key art of DnD products. It's one of the few unique DnD creatures I've known about for a long time. They also tend to be terrifying, with various magical abilities blasted out of their eyestalks and an anti-magic field wherever it looks with its main eye.

The next are the Mindflayers, or Illithid as they're more typically known. These cthulhu-influenced cosmic horrors feature prominently in the Baldur's Gate III story, and can be seen in the cinematic trailer for the game (including flying a Spelljammer). They reproduce by planting 'tadpoles' in compatible species, who transform into one of the psychic horrors themselves.

While those two monsters are the ones I'm most excited about, there are a few others worth mentioning. Bugbears are a sort-of large goblinoid creature that are the answer to the question "what if a goblin mated with a wookie". I've always speculated, due to his size compared to other goblins of the plane, that Grenzo, Havoc Raiser (and perhaps even Daretti, Ingenious Iconoclast) are a Fioran variety of bugbear. The adorable Owlbear is another unique and majorly popular DnD monster, this one being literal to its name: it's an owl crossed with a bear.

Where to Learn More

I mentioned a few products that are either out or coming soon, but the best way to learn is by checking out some DnD books. Outside of that, the websites for the video games, due to the nature of desiring to bring in a non-DnD audience, tend to have a lot of helpful information. Check out Baldur's Gate 3's site as well as that of Dark Alliance.

Anyway, that's all I have time for today, and mostly the extent of my DnD lore knowledge, so I'm looking forward to the set to be able to dive into the flavor!