Core Set 2021 is fully previewed, and boy does it have some great flavor. Last time, I talked about the Legends of Core 2021. This time, I'm going to dive into the great artwork in more detail. We've also got the small amount of new cards from Jumpstart (most of which are cool new lands), so I'll be mixing those cards in as well. This is a double sized article with a lot to talk about, so let's dive in! 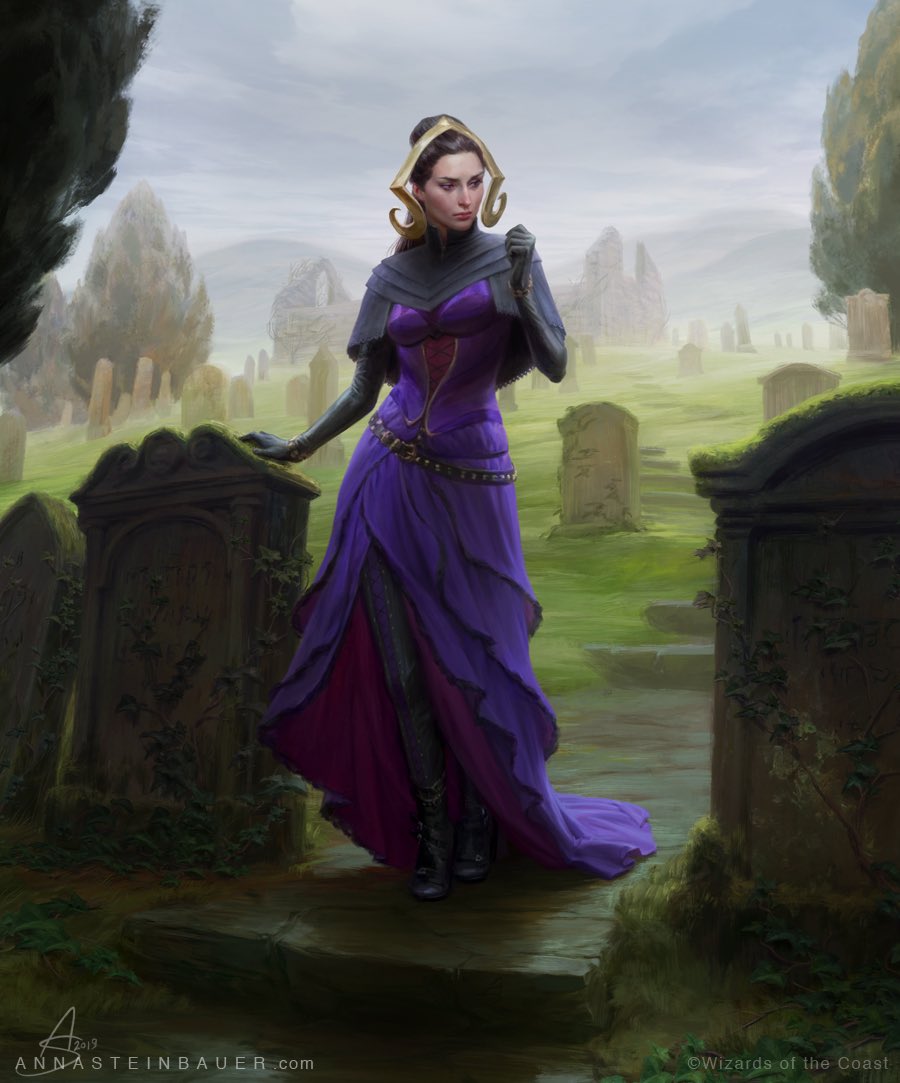 Liliana, Waker of the Dead by Anna Steinbauer

Liliana, Waker of the Dead has an interesting costume update, a shawl instead of The Chain Veil she once carried. Placed in the same spot as Liliana, Heretical Healer, this Liliana is reflecting on the life she's led up until this point. Is she suddenly going to give up Necromancy and become non-Black-aligned? No, probably not. But for the first time in a long time she no longer has an axe hanging over her head in the form of demonic deals or cursed veils, and maybe she's considering how she uses other people a bit.

The Signature Series has come to Core Sets, it seems, and I am here for it. While all the frames are interesting visually, I think Teferi's are my favorite. Let's hit them in order.

Basri's frame takes the characteristics of a desert, with flowing dunes as well as some motifs reminiscent of his armor along the text boxes. Visually it's not quite as distinct as some of the others, especially with the mana costs appearing faded instead of White like the others. Basri's Plains shows Naktamun as it once was.

Teferi's frame is reminiscent of classic Blue frames in Magic, down to the same patterns. The result is a modern frame with some of the classic look and I'm here for it. Note that, amusingly, Teferi never actually had a Legendary card in this frame before. Teferi's Island shows a Time Spiral-esque Island having regrown. It's not quite as cool of a reference as Meandering River being a direct reference to Calciform Pools, but pretty neat nonetheless.

I genuinely could not tell you which variant of Teferi, Master of Time was which, and I wish the differences between the art was more than a change to the 'top layer' (or foreground) opacity and slight variants on the pattern.

Liliana's frame simulates the swirling demonic contract on her skin, with some crown or veil-like accents and her angelic headpiece as a watermark. I think this is the one that best suits the character it is representing, personally. Liliana's Swamp is a bit disappointing, as it appears more like an Urborg landscape than something representing her actual home in the Caligo Morass.

Chandra's frames aren't unique like the others, as they're taken directly from Chandra's Signature Spellbook product. Since we've seen them already and had time to digest, I'm not including an image in the article. I do like the Chandra's Mountain, as the burning motif at the bottom looks awesome on the Kaladeshi landscape (complete with lots of swirling designs).

Next up is Garruk's frame, which is less great from a readability standpoint, as the lighter gradients make the white text harder to read in some places (especially the mana cost). I do like the axe motifs on either side of the text box, and the vaguely celtic patterns we see on Garruk as a watermark. Garruk's Forest tells us nothing about his home plane, as he is the only planeswalker here whose home plane isn't actually known, so sorry everyone who got excited that it was going to be an Origins-level reveal. 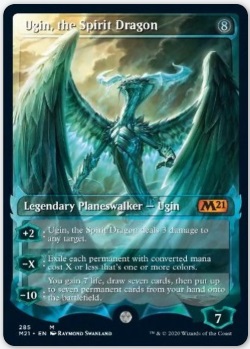 I would be remiss to not talk about Ugin, the Spirit Dragon's new frame. I like the translucent, ethereal look, and I especially enjoy the motifs representing his horns along the bottom and wings along the type bar. The U in Ugin is completely washed out in the upper left, however. It's a shame that we didn't get more cards with this frame design, it makes Ugin feel very lonely in the set.

I really like the alternate art, borderless versions of these Magic staples like Solemn Simulacrum. I think borderless cards are one of the best card frame designs coming out of Magic pretty much ever, so it's easy to make these something I want to chase down.

Here is my comprehensive list of good dogs (which will expand when the errata kicks in). I will brook no argument on this list. I will say that I especially love some of the armored dogs we've seen in this set, like Pack Leader (plus it's alternate art) and Selfless Savior. Good boys deserve good armor.

The Best of the Rest

I'm going to lightning round the rest of the Core 2021 cards because there's just too many to hit. Aven Gagglemaster is just a fantastic name for a goose aven. We haven't really seen this kind of aven before, so it's hard to say for sure what plane it is from. Basri Ket's resonance with leonin in Basri's Acolyte and Basri's Solidarity is interesting. I wonder if this is deliberate (outside of leonin being primarily white-aligned) because Oketra herself had a cat head. 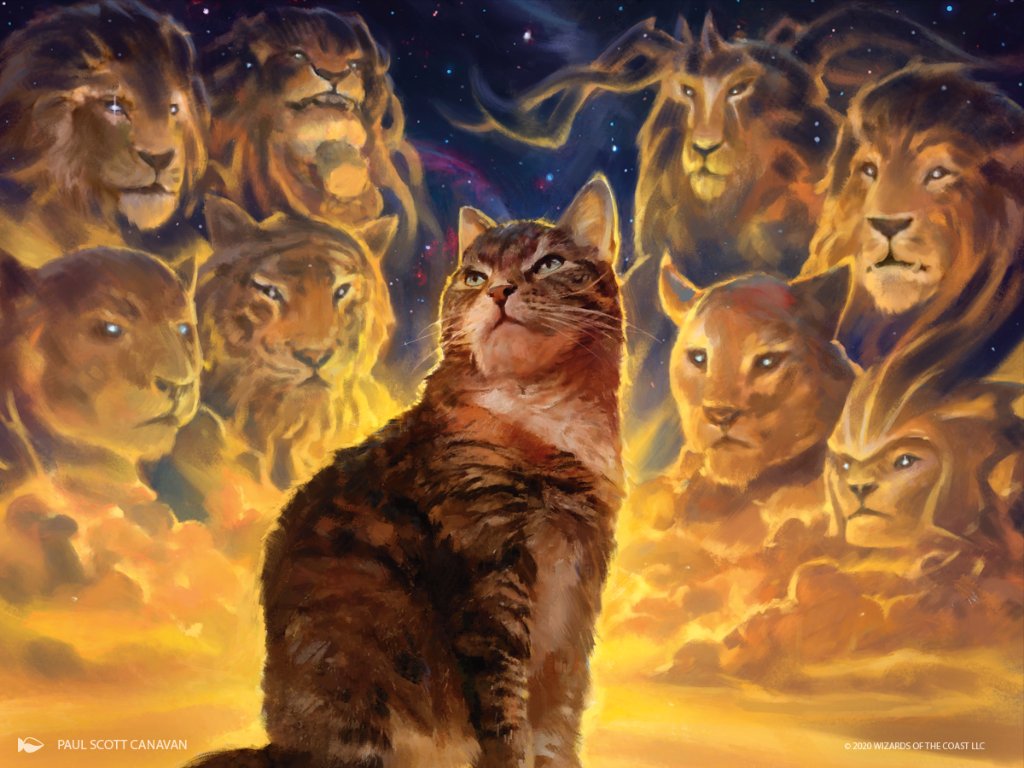 Nine Lives is a cute piece featuring a housecat and its (supposed) previous lives. According to the artist, those previous lives include Arahbo, Roar of the World, Jazal Goldmane, Jedit Ojanen of Efrava, Kaheera, the Orphanguard, Kemba, Kha Regent, Marisi, Breaker of the Coil, Mirri, Weatherlight Duelist, and Wasitora, Nekoru Queen. I say 'supposed', because artwork is not necessarily canon, and I don't want people to get the idea that this is more than a cute nod.

My good buddy @SamJFraserArt's beautiful cat, Mika, kindly posed for the final painting. She will of course receive half of all royalties. pic.twitter.com/DY0LJ3ADtT

The Sanctums (Sanctum of Tranquil Light, Sanctum of Calm Waters], Sanctum of Stone Fangs, Sanctum of Shattered Heights, Sanctum of Fruitful Harvest, and Sanctum of All) are a cool nod to the sanctums of Kamigawa. I would warn you that it doesn't mean they're set on Kamigawa, but these sanctums are inspired by Japanese Pagoda.

Tempered Veteran has an awesome prosthetic leg, and Thieves Guild Enforcer has a cool looking gold prosthetic arm. Staunch Shieldmate is a vaguely celtic (or Viking) inspired dwarf. I have no idea what is happening in Discontinuity, nor do I particularly want to. Pursued Whale is our Moby Dick reference, a whale pursued by a relentless captain. Bad Deal's art is a play on the meme from the Predator, when Dutch and Dillon greet each other. I'm not going to use the phrase they use here, because this is a family column. 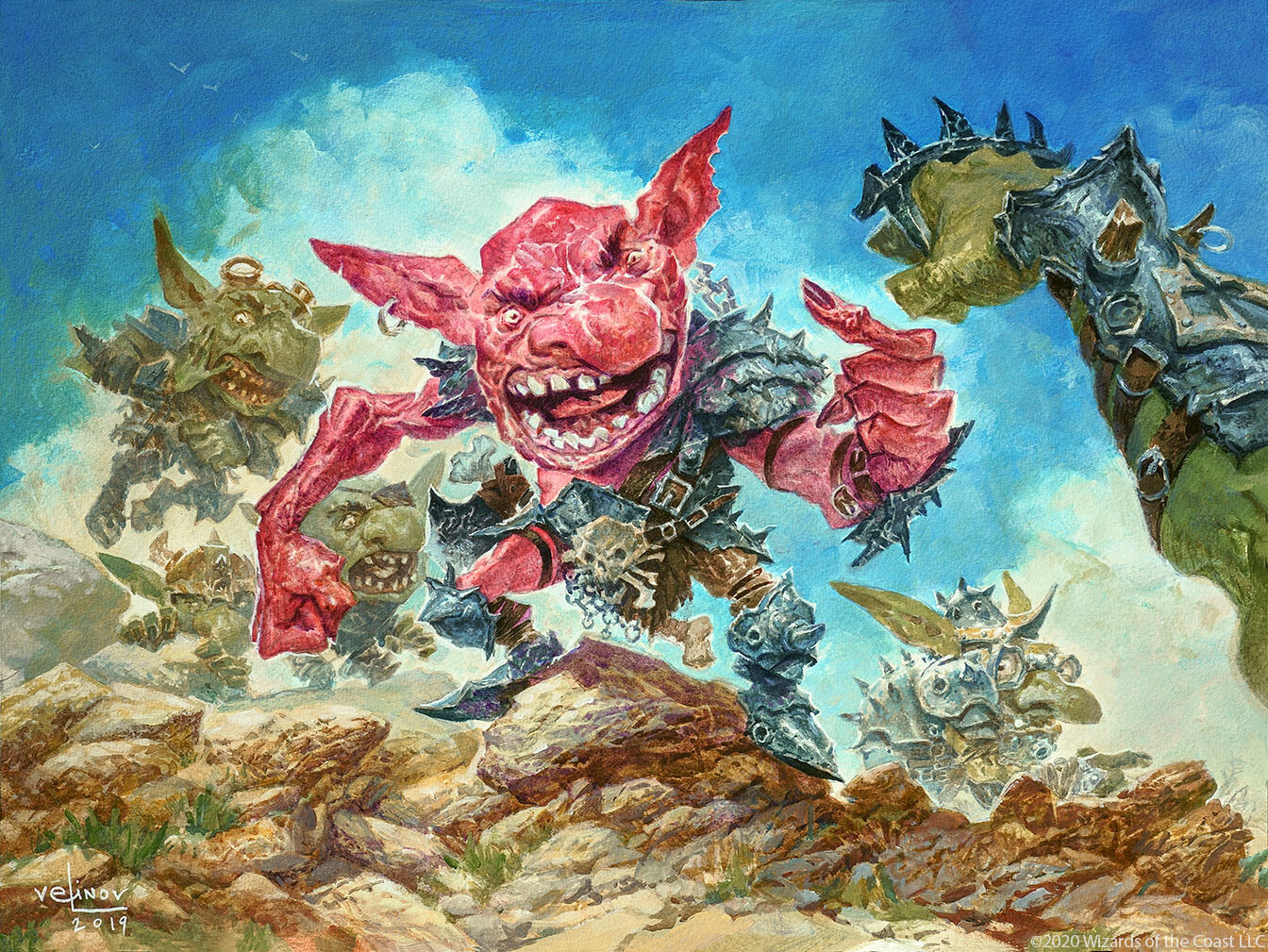 Brash Taunter is perhaps one of my favorite Magic cards ever at this point. It's just so perfect, down to the brash taunting goblin being Red (or making the others see Red, at least). Chandra's Magmutt hides Chandra herself in the background. Conspicuous Snoop is my other favorite card from this set. The flavor of a goblin being so obviously scoping a place out is just fantastic. It's like Goblin Spy had a beautiful baby with Future Sight.

Goblin Wizardry features goblins practicing their 'magic', including one setting his farts on fire. A+ all around. Elder Gargaroth, Drowsing Tyrannodon, and Ornery Dilophosaur feature new breeds of beast and dinosaur. Garruk's Harbinger takes a cue from Ikoria's bonders and puts Garruk on top of a beast that looks suspiciously like his costume. It would be cool to retroactively make this beast the kind that 'raised' Garruk on his home plane (seen in The Wild Son), rather than the default Enormous Baloth used in the art of the comic at the time.

Goremand is a pun on gore and gourmand, and I genuinely didn't think I would see a pun this explicit again as a card name. Bolt Hound is just such a cute name I had to give it a shout-out here. Trufflesnout is just adorable, and the flavor text makes me love the idea of truffle thallids (thallids being a fungal species). Finally, Leafkin Avenger is a new entry in the expanded Elemental-Kin first introduced in Core 2020. It is specifically a furious Leafkin Druid whose forest was burned down. Note the matching flavor text as well!

If you're wondering which cards from Core 2021 can be attributed to a specific plane, look no further. 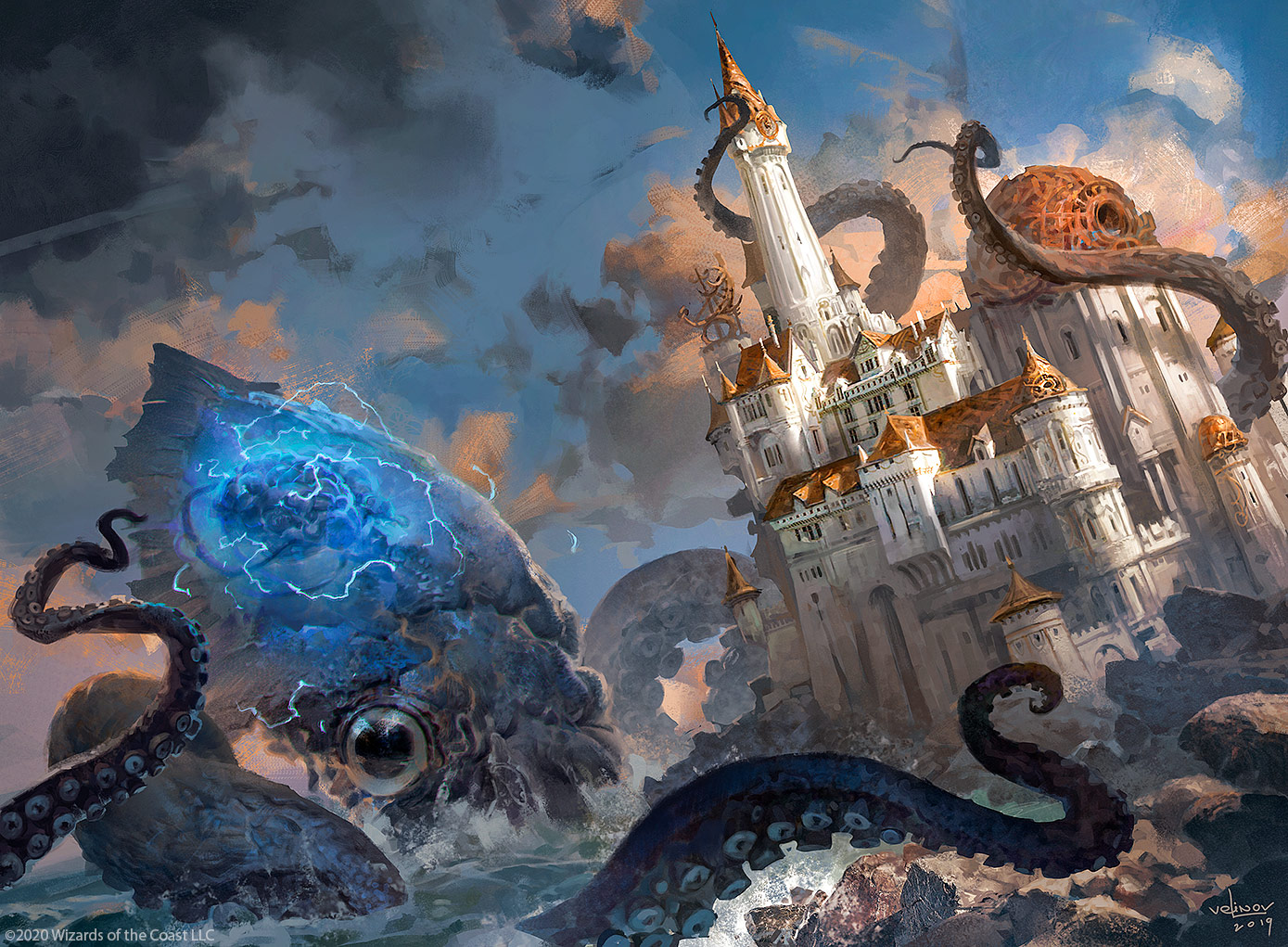 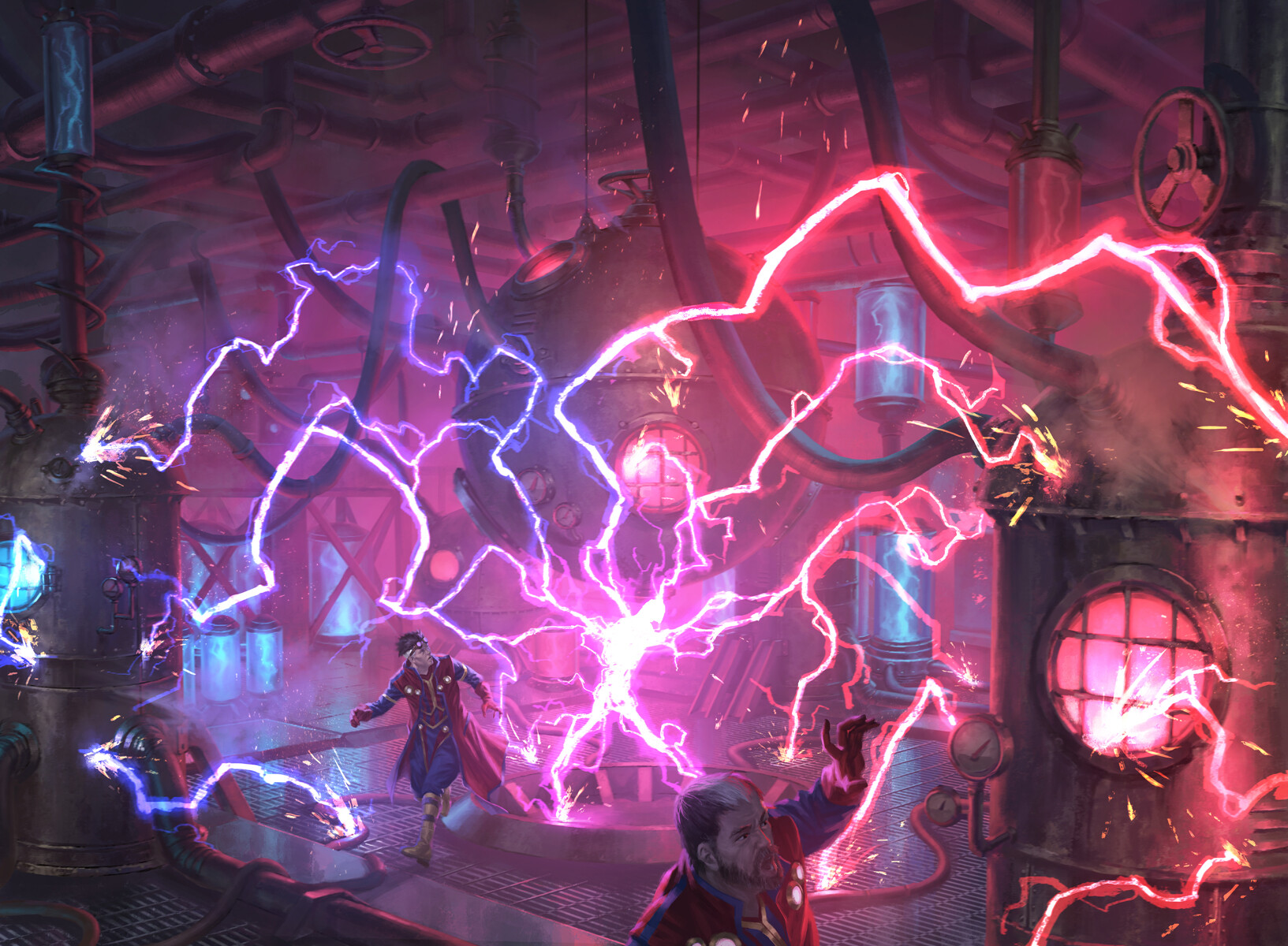 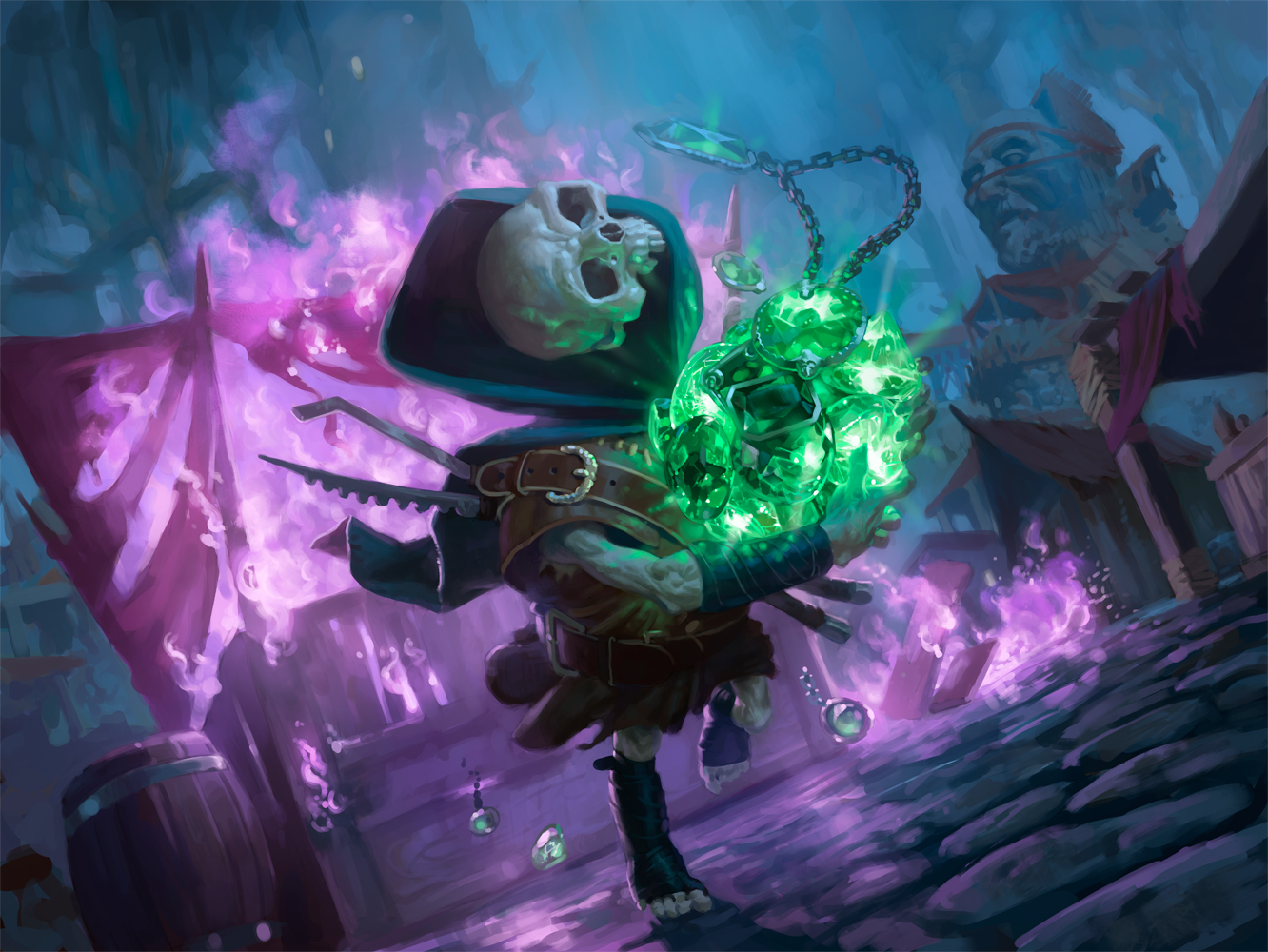 I'm not going to talk about all the new Legends from Jumpstart here, but I wanted to mention some of the great ones, starting with Legends from places we know. Inniaz, the Gale Force is a Dominarian Djinn who grants wishes, but what she grants comes at a steep price. Tinybones, Trinket Thief is from Urborg on Dominaria, a skeleton rogue who steals to 'feed' his tiny family. Sethron, Hurloon General is the defender of Hurloon Valley, the home of the white-furred minotaurs of Dominaria (in Aerona's the Red Iron Mountains near Benalia).

Kels, Fight Fixer is an Azra mob boss from Kylem who, uh, takes advantage of the sports betting industry there. Bruvac the Grandiloquent is an Azorius judge with such an extensive knowledge of the law that he grinds all legislative and judicial proceedings to a halt.

Some Legends that aren't plane specific include Muxus, Goblin Grandee, who was the preview for my podcast, The Vorthos Cast. Muxus is actually a set of goblin quintuplets who roll a dice to determine who is 'Muxus' for the day. Note the references to some other goblin cards in the background. Neyith of the Dire Hunt is from a nameless plane, but artist Magali Villeneuve gave it a Princess Mononoke vibe, which I asked about on twitter. 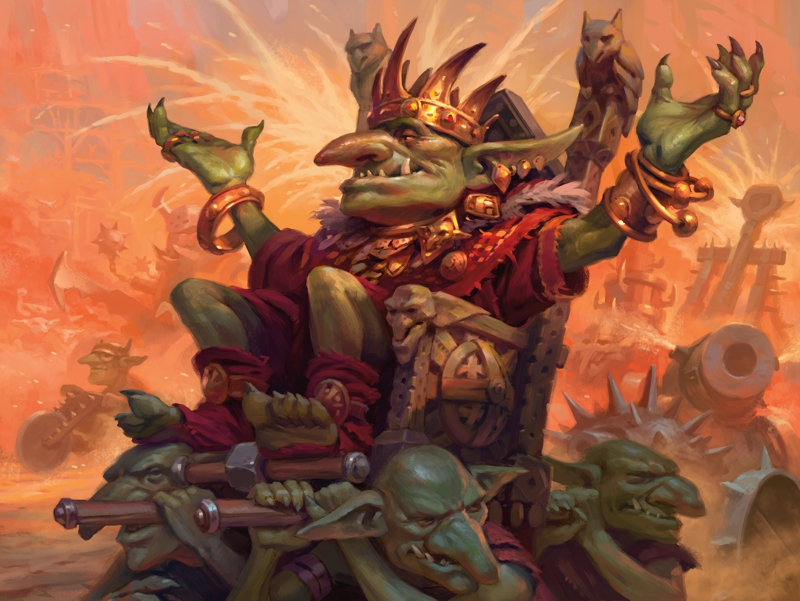 Allosaurus Shepherd is very cool, and seems like a callback to Allosaurus Rider. Let me give you some backstory here. Way back in the Ice Age, the forest of Yavimaya was one of the few warm places that still remained, and it's where most of the elves that had been displaced by the Ice Age had gathered. Also living in the forest at that time were some dinosaurs, or specifically Allosaurus, like Pygmy Allosaurus or Territorial Allosaurus. The elves ended up domesticating them (as much as you can domesticate a predatory dinosaur) and used them as mounts, or as I like to call them, Yoshis.

Release the Dogs is a fun play on the fact that hounds are now errata'd to dogs, otherwise this would have been "Release the Hounds", a popular Simpsons quote. Archeomancer shows off kintsugi (which Miranda Meeks confirms here), which is a really cool Japanese art that doesn't focus on the damage to something as something to be hidden but instead embraced as part of its history. 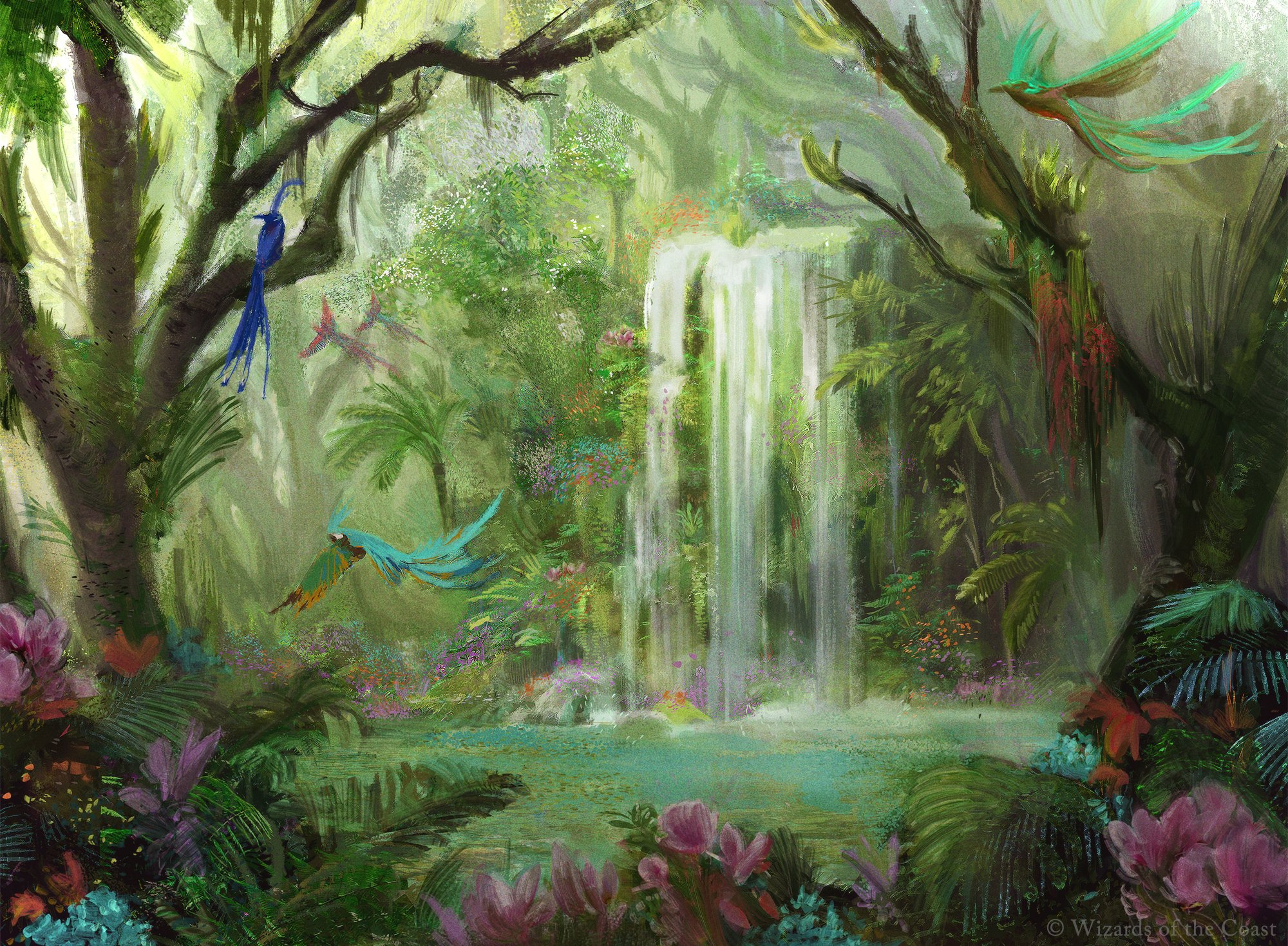 The lands themselves are worth talking about too, as each 'theme' gets its own special land. The Thriving cycle of lands, besides just being great cards, are absolutely gorgeous panoramas of vivid color. My favorites are Thriving Grove, which features Birds of the Paradise, and Thriving Moor, which features Lotuses (a MTG staple plant for representing any color). Oh, and we got a Terramorphic Expanse with new art for the first time since Time Spiral after 27 reprints without new art. For reference, the mechanically identical Evolving Wilds has had 11 different pieces of art across 35 reprints.

I can't possibly talk about all 40ish themed basic lands here, so make sure to check out the Jumpstart Card Image Gallery. I want to get that Reanimated Swamp into my Zombie deck ASAP, though. And the Phyrexian Swamp, with the name and type box in Phyrexia and a Phyrexian Obliterator set against what appears to be a vent in the Mephidross on New Phyrexia? *Chef's Kiss*

That'll be about it for today. I'm actually up and moving the week you see this, so I won't be back next week, but expect my weekly articles to otherwise continue for the near future.