Welcome back to my third flavor gems article in as many months! While it's been a busy few months for Magic, we've still got a ton of flavor gems coming. Core Set 2020 is not oozing the same amount of flavor that its predecessor did, but that doesn't mean there's nothing worth talking about! Let's dive in.

While Ajani, Strength of the Pride is ostensibly the more powerful card, his planeswalker deck version, Ajani, Inspiring Leader, is the one I want to talk about. Did you notice that this card depicts him on Theros, where his in-pack card is sort of a generic field (possibly Bant)? 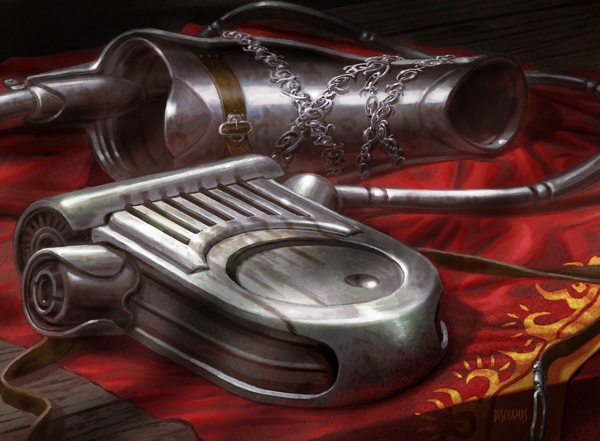 Chandra is the headliner of Core Set 2020, and for good reason. She's massively popular and received four (4) planeswalker cards in this set, an uncommon, a rare, a mythic rare, and a planeswalker deck version. Chandra, Novice Pyromancer depicts her as a youth on Ravnica or maybe Kephalai. Chandra, Acolyte of Flame depicts her training at Keral Keep. Chandra, Awakened Inferno depicts her on what appears to be Zendikar, where she began coming into her own as a hero.

She also received an associated card, Chandra's Regulator, which is a device her father, Kiran Naalar, built for her before his death in Chandra's Origin: Fire Logic. The device was called a 'vent pack' and was designed to help Chandra to help bleed off the excess energy she wasn't able to control as a child.

Mu Yanling, Sky Dancer is a fun character from the Global Series (singular) who was missing from the War of the Spark card set but appeared alongside Jiang Yanggu in the story. It's nice to see her get a (slightly belated) card in Core Set 2020. Flood of Tears depicts her wielding her powers over water and wind.

Sorin, Imperious Bloodlord continues to demonstrate how awesome tribal planeswalkers can be. In his art he stands before an Avacynian statue, probably representing his ties to the church. I wouldn't read too much into him being Mono-Black.

Kaalia, Zenith Seeker is the second time we've seen Kaalia of the Vast. Kaalia started life as just Lia, a young girl from a small village in Bant on Alara. Her story is told in The Stonekiller and The Stonekiller, Part 2, but we've never seen how she became a master of angels, dragons, and demons alike.

Kykar, Wind's Fury is the aven version of a common crane, based on their coloring. Unfortunately, this and the lack of discernible details in Kykar's art means we don't know what plane they originate from immediately. While the Jeskai-colors on the card seem to point toward being one of the Tarkir crane-like aven, Kykar isn't a match. Sometimes, as much as you'd like it to be, a card is just from a generic plane.

Omnath, Locus of the Roil is back for the third time, gaining yet another color. We know from Worldwake: A Plane in Revolt that Omnath was once imprisoned on the continent of Ondu to keep the rest of the plane safe. With the Rise of the Eldrazi, however, the pilgrims who regularly renewed the magic binding Omnath did not return, and the elemental emerged to wreak havoc, picking up a new color every time we've seen them.

Rienne, Angel of Rebirth is an oddity in Magic, a six-winged angel. While we've seen four-winged angels on a couple of planes, six wings are rare, and have only really shown up on Zendikar. What interesting is that Bishop of Wings has a six-winged angel motif, despite obviously being on Innistrad. Appearing in the same set as Rienne, I wonder if there is a relation. 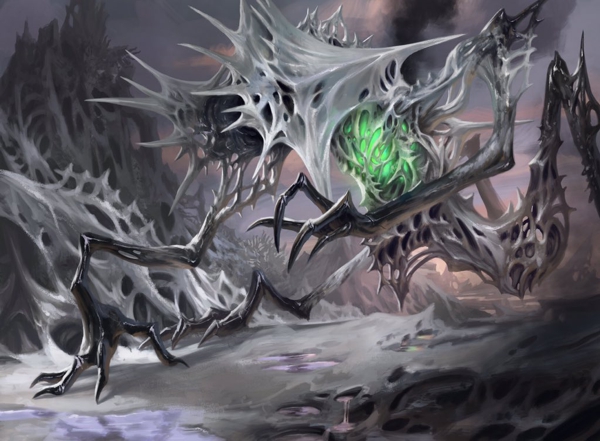 A wastes elemental is such a great concept.

Yarok, the Desecrated by Daarken

Yarok, the Desecrated is an elemental formed in Bala Ged, the region worst hit by the Eldrazi after their release. He's very clearly a Wastes elemetal, which is a pretty cool concept. Yarok's Wavecrasher, Yarok's Fenlurker, and Healer of the Glade give us more of the four stanza Lament for Bala Ged:

Yarok grieves within the waste

Where armies bled into the sand.

Where dark despair is near at hand.

Grief and rage and nightmares fade

Where hope and comfort make their stand.

Aerial Assault depicts four Squadron Hawks attacking an orc or an ogre. I love that there are subtle references like this sprinkled throughout the set.

Captivating Gyre, like Aerial Assault above, references existing cards. It depicts three Tempest Djinn being sucked back into a lamp on the floor. It's a very cute bit of flavor, with flavor text from Atemsis. I should note that this doesn't indicate Atemsis as being Dominarian, as flavor text alone doesn't narrow things down

Cloudkin Seer, Leafkin Druid, Waterkin Shaman, Lightning Stormkin, Thunderkin Awakener, and Lavakin Brawler are neat expansions to the humanoid elemental concept from Lorwyn, the Flamekin. I would love to see these kinds of elementals show up in future sets. 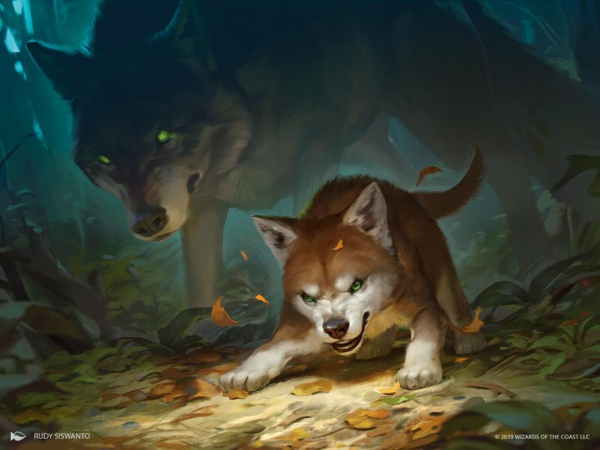 Ferocious Pup is just the cutest good boy ever! I love that the real threat is momma, who is hanging out behind the pup making sure you don't touch her baby.

Goblin Smuggler is a cute card that's a flavor gem front to back. The idea of a goblin smuggling another goblin through a city gate is really fun, especially the goblin's claims of innocence.

Masterful Replication does not appear to be a specific plane, but I wanted to share a very cool Maquette from the artist, as he always rocks these things:

Bonus Maquette, I made this while I was away, needless to say that maquette did not survive, pity because it was one of my favorites. pic.twitter.com/gJ4zSDD0eA

Moat Piranhas is one of the most fantastic excuses for Defender on a card I've ever seen. This concept is hilarious, and I hope we see more like it.

Silverback Shaman is a Yavimayan Ape, from the tribe of intelligent gorillas that once dominated Yavimaya during the Ice Age, but were displaced by the elves who came later. When Multani, Yavimaya's Avatar was dormant and Yavimaya grew out of control, the elves were pushed out and the apes began to return to prominence, as we see in Grunn, the Lonely King.

Sorin's Guide is a fantastic callback to the story Sorin's Restoration (and Sorin's Revelation, for that matter), and the Atarka Guide he turns to lead him to the Crucible of the Spirit Dragon to free Ugin. In both stories in both Tarkir timelines, Sorin takes a guide (Temur and Atarka clan, respectively). It's a shame this was flavored as a Kolaghan warrior, but it's still a cool bit of flavor. 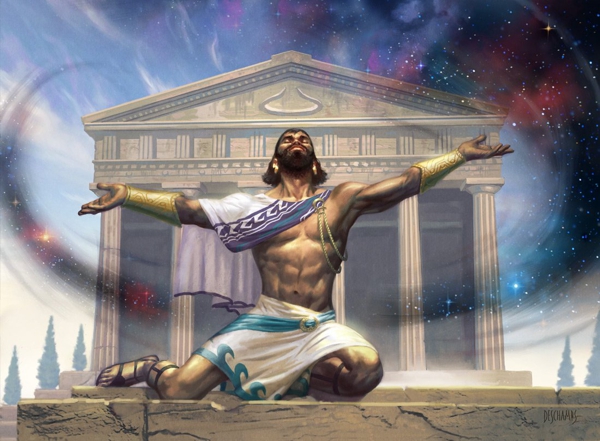 Starfield Mystic is a Priest of Heliod, as you can see Heliod's 'Laurel Crown' emblazoned on the temple behind him. The same symbol is visible in Hall of Heliod's Generosity. The art is interesting in that there's a streak of Nyx the cleric seems to be causing despite it being daylight out.

Squad Captain is a New Benalian lancer. I love seeing all the Dominarian references after so long, and that Wizards is continuing to dip into that well. 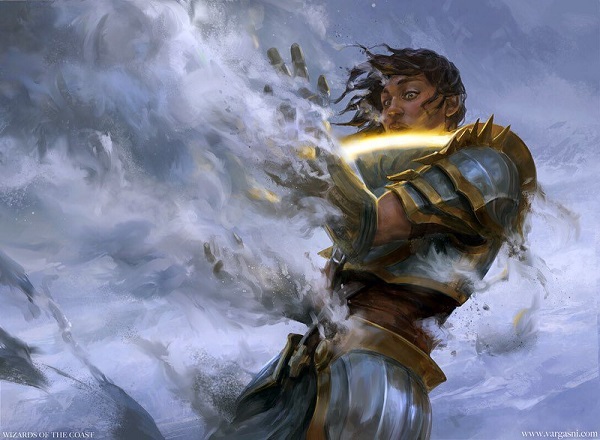 Tale's End depicts General Tazri as she's under assault by Kozilek, the Great Distortion. In the story, she is only saved by the angel halo she acquired in her youth. It's a nice bit of flavor as Tale's End can count Tazri and both of her abilities!

Wolfrider's Saddle is a great piece of flavor. Wolves are ridden all over the multiverse, notably on Ravnica by the Selesnyan Ledevs.

Krinnea, Siege of the Bone Spire

The set also introduces the 'book' Krinnea, in which tells the tale of the Siege of the Bone Spire. I'm collecting some cool references to this story here. I'm a big fan of linked flavor like this, especially when used to tell a story. The Ebon Legion from Knight of the Ebon Legion seems to be involved in this conflict, somehow.

Corpse Knight - "With each knight that rode out from the bone-white keep, the queen's soldier felt their courage failing.

Dawning Angel - "As the sun rose behind the Bone Spire, an angel appeared over the charnel fields, bringing a surge of new hope.

Zephyr Charge - "The knights charged forward on wings of wind, and the necromancer's horde roared in helpless rage."

Legion's End - "With a single word, they were unmade."

Dark Remedy - "Writhing tendrils of darkness stitched him back together. Though his will and body both were broken, the necromancer's Magic would not let him rest."

That's all I have time for this set! I vastly enjoy the new Core Sets over the old, and while this one didn't always go quite as deep, where it did was excellent. I hope you enjoyed this dive into the flavor of Core Set 2020, and I'll see you next time!