Welcome back, Loreseekers! I... had nothing additional for Forgotten Realms, and a new Innistrad set is upon us, so let's talk about that! It is now five years after our last trip to Innistrad, and I've been writing long enough that this is my second return set for which I also covered the previous return! If you want to read my longer, older articles, you can find them here: Archive Trap: The World of Innistrad and The World of Innistrad Part II: Eldritch Shadows. Those older articles are a bit dry, though, so for those on the TL;DR train, here is my more concise catch-up as we dive into Midnight Hunt and Crimson Vow!

The Plane of Innistrad 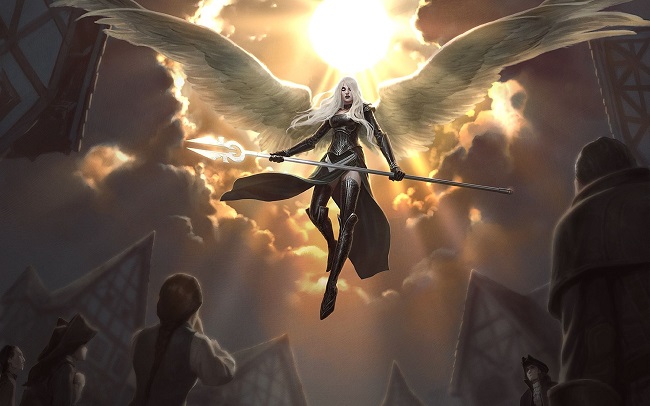 Innistrad is an awesome setting with a lot of very cool worldbuilding. A gothic horror setting, the plane defined what a top-down setting could be. Using inspiration from classic film monsters and classic literature monsters (Frankenstein, Dracula, etc), it built a plane where humans desperately cling to hope where every bump in the night is probably something there to eat you.

The plane is divided into four main locations: Gavony, the rocky moors where the Church of Avacyn is headquartered in the capital city of Thraben; Nephalia, where merchants and mariners are plagued by undead spirits and the zombie creations of necro-alchemists; Kessig, the wild hinterland forests where Werewolves and ancient forces run rampant; and Stensia, where vampire aristocrats hold sway over a terrified populace.

The History of Innistrad 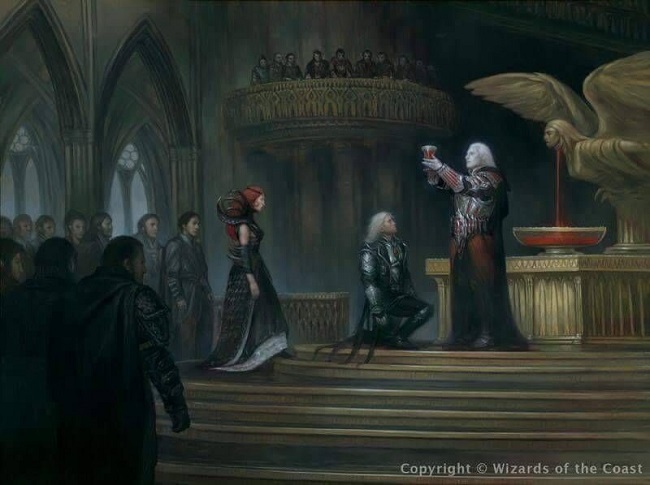 Millennia ago, Edgar Markov a minor nobleman of Stensia, conspired with a demon to solve a famine striking the region. Using the blood of an exsanguinated angel, Edgar and his closest friends and families were transformed into vampires. The vampires could feed on the human populace, thus 'solving' the problem. The vampires led a wanton lifestyle for millennia as the human population steadily dwindled. Edgar's grandson Sorin Markov, was a planeswalker who realized that if left unchecked, the vampires would wipe out humanity and starve. To keep this from happening, he created Avacyn, Angel of Hope as a check on the monsters of the plane. In so doing, he failed in his obligations to Nahiri, the Lithomancer, who came to seek vengeance. Nahiri was sealed by his new angelic creation in the Helvault, a prison designed to bind the demons threatening the plane, who could otherwise eventually reform if slain. 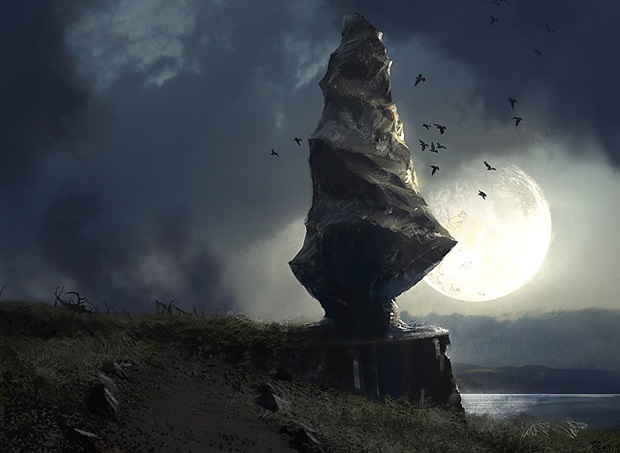 For a thousand years Avacyn led humanity to prosper - her power waxing and waning as she kept the human population stable. That is until just a few years ago, when Avacyn disappeared. In a battle with the demonlord Griselbrand, Avacyn was greviously wounded and sealed inside the Helvault with the demon. Chaos reigned as Avacynian magic began to fail, and the people began turning to other sources to protect themselves: ancient shamanistic practices outlawed by the church, or turning to the dozens of cults that sprung up around some ancient creature or another. 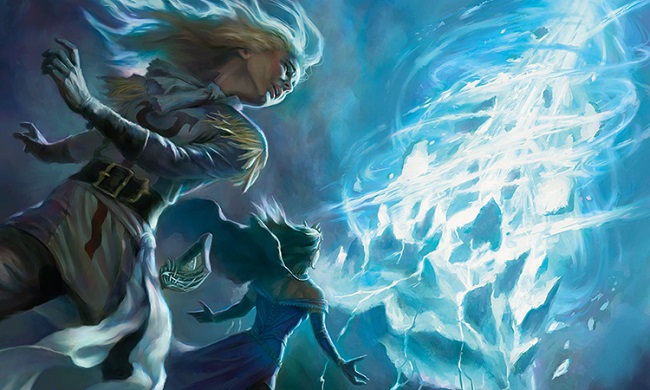 Things looked bad for Innistrad until the arrival of Liliana Vess, who sought to destroy Griselbrand with The Chain Veil and free herself from the demon's debt. Slipping into Thraben during the zombie invasion of the squabbling siblings Gisa and Geralf, Liliana forced the city's beleaguered defender Thalia, Guardian of Thraben to make a choice between the Helvault and the lives of her surviving companions. Thalia chose life, and the Helvault was destroyed, freeing Avacyn... and everything else inside. Avacynian magic surged, and the forces of darkness were pushed back, while Liliana got her wish and destroyed Griselbrand.

Note that Innistrad came after the cancellation of the novel line but before Magic web fiction began in earnest. The story is told through a few summary articles, although some early web fiction told side stories set there, and Dack Fayden had an adventure there during his comic run.

Between Innistrad and Shadows Over Innistrad, we learned more about Garruk's curse (courtesy of Liliana Vess and the Chain Veil) as well as Sorin's involvement with Nahiri on Zendikar. We also meet Odric, Master Tactician, who will play a large role in the next set. 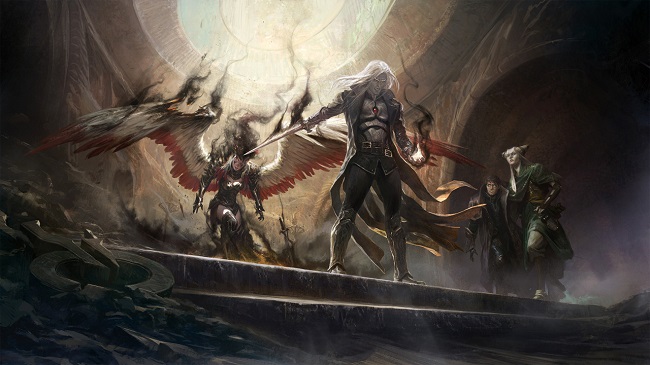 A year or so after Avacyn's return, hope turns to terror as the archangel mysteriously turns on humanity. Most of the angels (except for Sigarda, Host of Herons and her flight of angels), and a large segment of the Church, do as well. Thalia is imprisoned by the Church for speaking out against the atrocities being committed in Avacyn's name, but is freed by her old friend Odric. Jace Beleren arrives, seeking Liliana's help tracking down Emrakul, the Aeons Torn, and soon begins to go mad himself. With the help of Tamiyo, Field Researcher, Jace's mind is cured, and as they investigate the cause of Avacyn's sudden turn, the angel herself tries to kill them. Sorin arrives in time to save them (although not intentionally), and unmakes his treasured creation. As he does, the last of his ancient wards on the plane unravel with the angel, allowing Emrakul herself to manifest on the plane. The ancient history with Nahiri is revealed, and we learn that Nahiri was freed from the Helvault when Liliana destroyed it, but returned home to find her plane ravaged by the Eldrazi. Determined to get revenge on Sorin, she lured the Emrakul to the plane. The Gatewatch, plus Liliana and Tamiyo, attempt to battle the titan like they did the others on Zendikar, but find themselves overmatched. 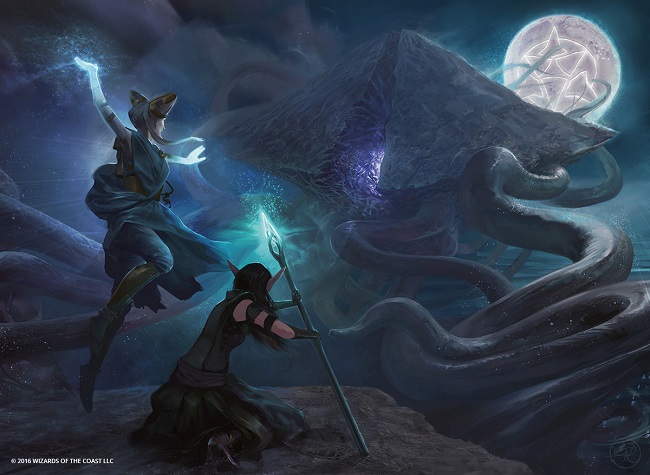 Imprisoned in the Moon by Ryan Alexander Lee

Meanwhile, Sigarda and Thalia battle Brisela, Voice of Nightmares and a horde of Eldrazi mutants, just managing to destroy her, with the aid of benevolent spirits and surprisingly, the vampires of the plane led by Olivia Voldaren. Nahiri and Sorin battled in the ruins of his ancestral manor, and as Nahiri gets the upper hand she seals Sorin in a prison of stone, forcing him to watch the destruction of his plane. Using a forbidden scroll, Tamiyo powers a last-ditch binding spell, sealing Emrakul in the moon like a giant Helvault (and later, we learn to our horror, discovering that Emrakul sealed herself inside with the power of an entire plane).

In the aftermath, the overwhelming power of the Church of Avacyn is broken, most of the Avacynian magic has failed, and a new sect have emerged following Sigarda, the last archangel. Much like during Avacyn's disappearance, much of humanity is turning to the older ways, before the church, and we'll have to wait and see what that looks like.

Before we go, I wanted to mention Children of the Nameless, the excellent Brandon Sanderson novella that takes place in a remote part of Kessig, and the Chandra comic, which features Tibalt and a battle on Innistrad. Neither of these seem officially available digitally anymore, and it seems unlikely that either will have a large bearing on the plot of the upcoming set.

That's All for Now! I'll see you again soon with the Legends of Innistrad!