Five years after Battle for Zendikar kicked off the Gatewatch saga, Magic is set for its third return to Zendikar, putting Zendikar alongside Dominaria and Ravnica as the most-visited planes in Magic. It was also when I got my start writing about Magic Lore, alongside my friend Kaburi, publishing Archive Trap: the World of Zendikar Part I as the first in an ongoing series of lore summaries. Today I'm going to look back at Zendikar again as a primer for the uninitiated.

The Plane of Zendikar 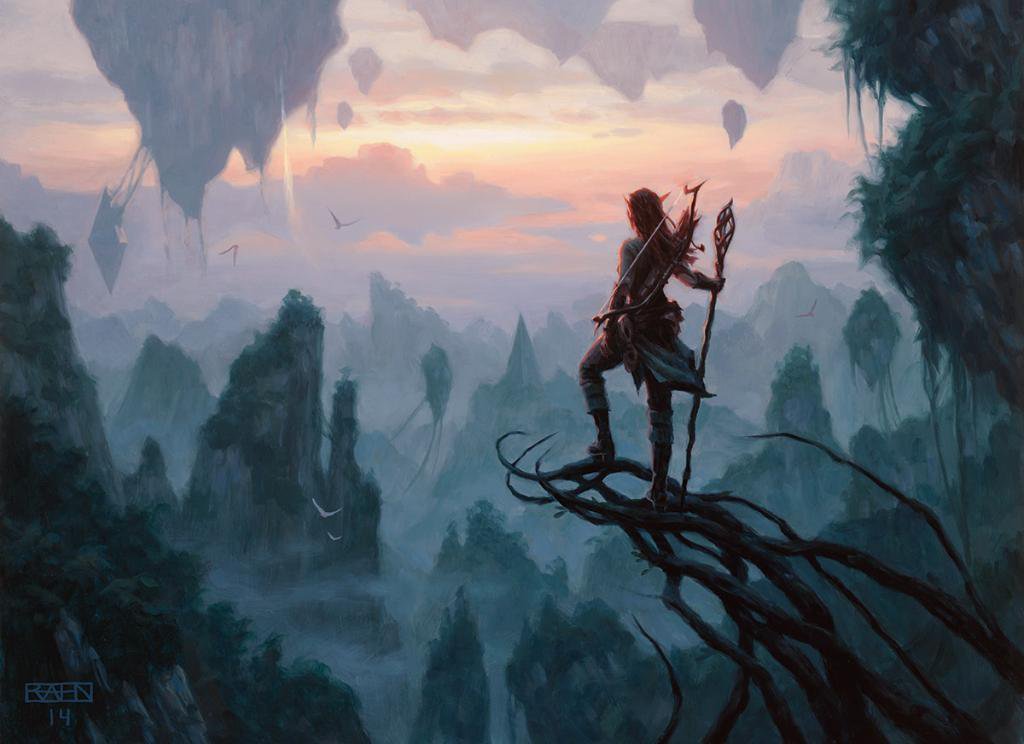 We joke about how Zendikar resembles Pandora, but Zendikar premiered first (by two months).

Despite being the youngest of the three planes most visited by MTG, Zendikar has rich worldbuilding. As it should, as the plane's spirit of adventure vibe depends on there being places to go. There are seven continents on Zendikar, although only half of them have mattered to the story so far. It's possible to create a map of the plane based on cardinal directions and geographic hints, but there hasn't been an official one produced. Here's the gist of the basic layout of the plane.

To the northeast is Akoum, a continent wracked by tectonic instability, making it virtually uninhabitable. Bala Ged, a humid marshy rainforest connects Akoum to Guul Draaz, a fetid swampland. The continent of Tazeem, home to twisting forests and deep inland seas, lies west across a narrow ocean from Guul Draaz.

In the southwest of Zendikar lies Ondu, a continent of dramatic verticality with deep trenches and towering forests (Akoum is to the west of Ondu, which was either a continuity error or an indication that Zendikar is round). Murasa, a remote island continent of towering cliffs and deep forests is located somewhere on Zendikar we haven't fully pinned down yet. And finally, north of Akoum lies Sejiri, the permafrost steppes of the most inhospitable continent.

You should note that Sejiri and Bala Ged were the first continents destroyed by the Eldrazi as they spread from Akoum.

The History of Zendikar 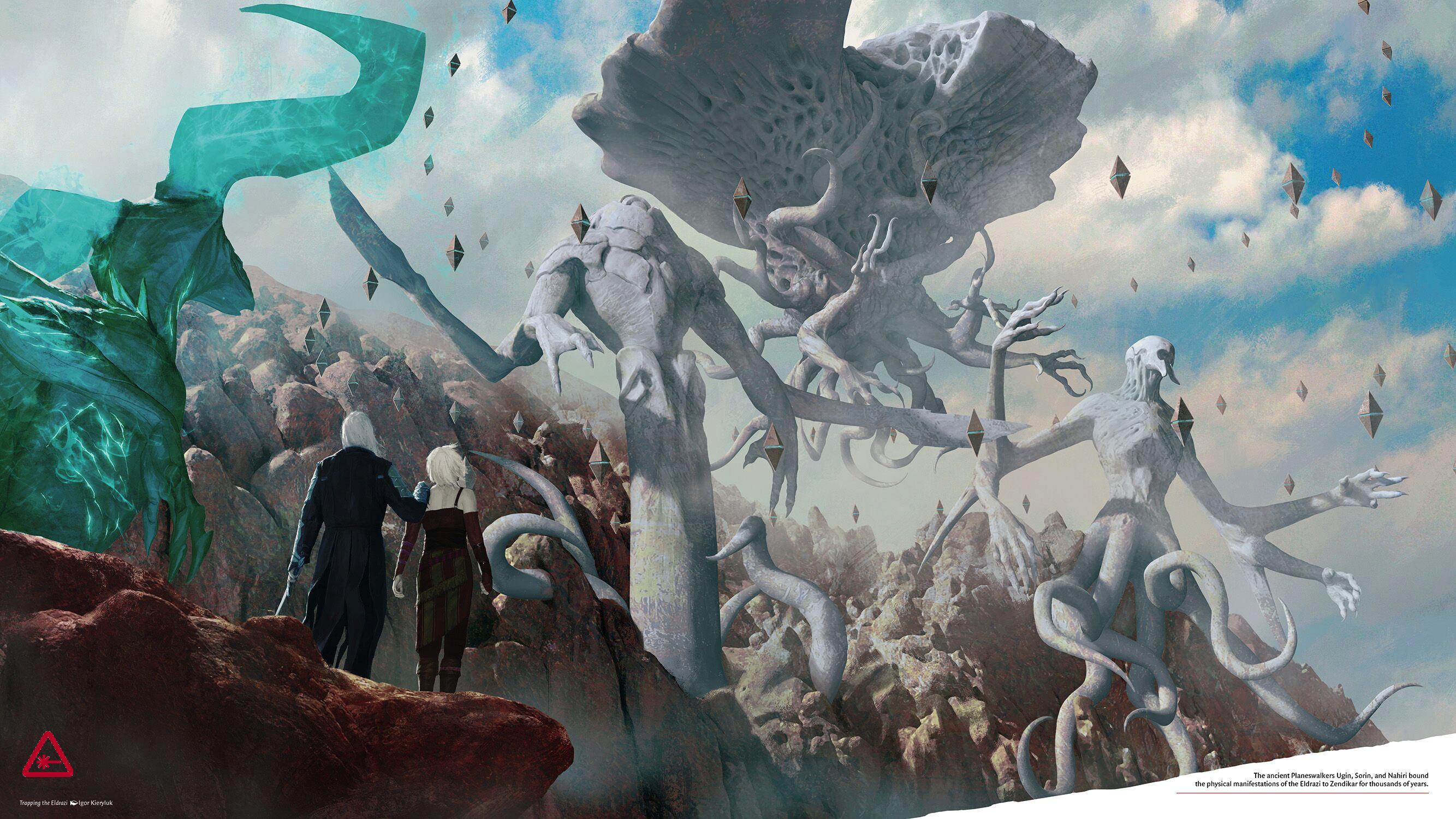 Much of Zendikar's history was filled in after the first block.

Trapping the Eldrazi by Igor Kieryluk

There's a surprising amount of backstory for Zendikar, it's a been a plane whose history has been revisited on more than one occasion to fill in some blanks and establish things for the future. While the following is presented in chronological order, keep in mind that Zendikar's backstory and worldbuilding evolved as time went on.

Six thousand years ago, three planeswalkers joined forces to imprison the ancient extraplanar horrors called the Eldrazi. Two of these planeswalkers, Ugin, the Spirit Dragon and Sorin Markov, were vastly more ancient and powerful than the third, Nahiri, the Lithomancer. Nahiri was convinced that only Zendikar met the appropriate criteria to seal the Eldrazi, and she went along with the plan. The Eldrazi were imprisoned on Akoum and Nahiri became their jailor, standing guard for millennia over the Eye of Ugin, the keystone in the Hedron Network they built to bind the extraplanar beings. But when the Eldrazi were nearly loosed from their prison five thousand years later, neither Ugin nor Sorin returned to aid her as they promised.

Nahiri went first to the home of her old mentor, Sorin, and discovered he had set up defenses on his plane in the form of the Helvault and Archangel Avacyn that prevented him from receiving the call for aid. Angry with Sorin's callous indifference to failing Nahiri in her time of need, Nahiri attacked him. Sorin's new archangel sealed her away in the Helvault, and Zendikar was left without a champion.

Note: At some point Nahiri binds Ob Nixilis with a hedron that strips the demonic planeswalker of most of his power. Ob Nixilis had lost his spark somehow and become trapped on Zendikar, and began to vow revenge.

A young Nissa Revane is a budding animist 60 years ago, at a time when her clan, the Joraga elves of Bala Ged, were violently opposed to such ability. Leaving home, she followed what she believed was Zendikar's guidance to Akoum, only for her spark to ignite in horror at the Eldrazi presence there. 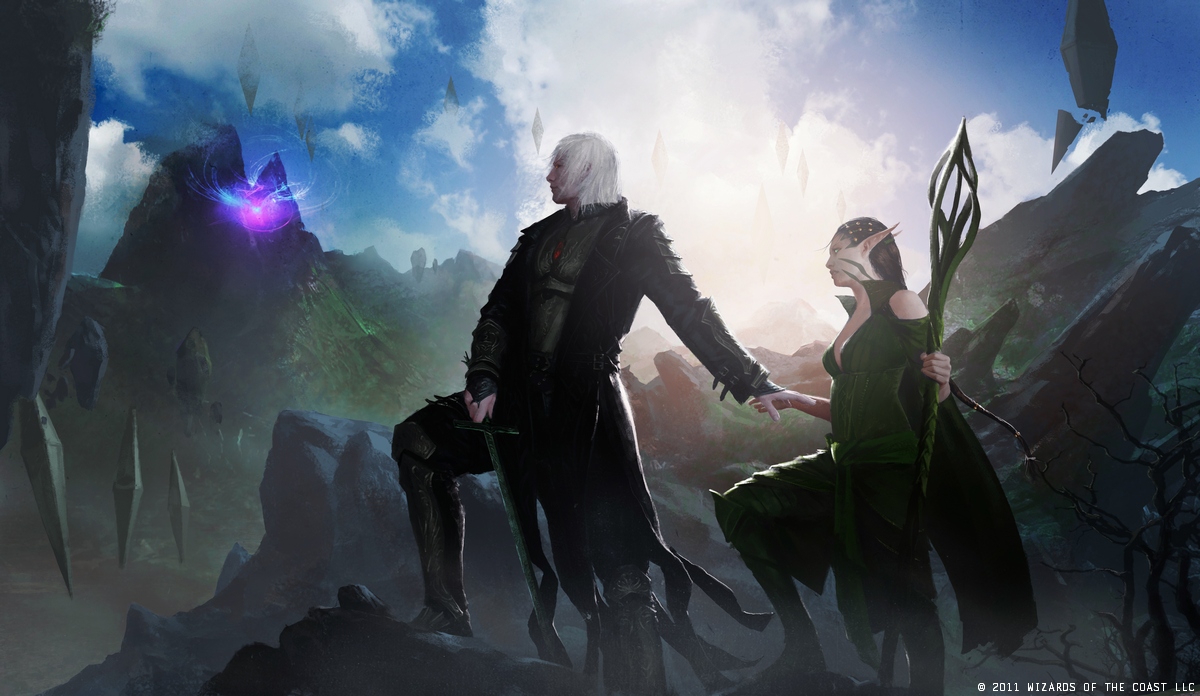 Please don't read In the Teeth of Akoum,I don't recommend it, this summary is enough.

Duels of the Planeswalkers Loading Screen Art by Igor Kieryluk

Just a few years ago, Jace Beleren and Chandra Nalaar are lured to Zendikar by the machinations of Nicol Bolas, Planeswalker. There, at the Eye of Ugin they battle Bolas's minion, Sarkhan the Mad, and accidentally unlock the Eldrazi prison. All three planeswalkers eventually flee the plane. Gideon Jura follows not long after, searching for Chandra, only to find the world wracked by the Eldrazi menace.

A few months later, across the sea, Nissa learns of the Eldrazi while living among the Tajuru elves that are the predominant clan on Zendikar. She allies herself with Sorin and Anowon, the Ruin Sage, and together they travel to the Eye of Ugin. Nissa did not trust her vampire companions, however, and betrayed Sorin, destroying the keystone that bound the three Eldrazi Titans. Nissa believed that once freed, the Eldrazi would choose to leave.

She was wrong, and all of Zendikar paid the price.

Regular short fiction wasn't quite a thing yet for Magic, but there were a handful of short stories for the block. My personal favorite is that of Tuktuk the Explorer. None of these have any major bearing on the overall plot, but the Consortium Report is a summary of the Zendikar webcomics.

There's a lot that happens between Zendikar and Battle for Zendikar. Nissa has some profound character growth during Nissa, Worldwaker, where she finally accepts her animist abilities and becomes much less insular in her view of the world. Ob Nixilis is freed from the hedron Nahiri implanted in him and begins plotting to regain his spark. Gideon is splitting his time between Ravnica and Zendikar, and finds he can't do it alone anymore. He recruits Jace (and fails to recruit Chandra) to aid the cause, and Nissa becomes a sort of wandering hero.

Elsewhere, on Innistrad, Nahiri is freed from the Helvault.

I'm already past my word count, so I'm going to direct you here to the two story summaries for the bulk of the Battle for Zendikar and Oath of the Gatewatch story summaries. The gist is this: Gideon, Jace, and Nissa (with others, like Kiora) attempt to bind the Eldrazi again. It fails, thanks in part to Ob Nixilis, who harnesses the energy of the Hedron Network to reignite his spark. Ob Nixilis captures our three heroes, but they're rescued by Chandra, who had a change of heart about helping. The four planeswalkers form the Gatewatch, a group dedicated to defending planes from extraplanar threats.

Together, they go against Ugin's wishes and destroy two of the Eldrazi titans. The third, Emrakul, the Promised End, is lured away by Nahiri to Innistrad. Beyond the Zendikar stories, Nahiri's plan to destroy Innistrad in ill-conceived revenge against Sorin is stymied by the Gatewatch. We last see her working together with Sorin on Ravnica during War of the Spark, after the pair initially tried to murder each other while the plane dissolved into chaos and destruction around them.

Nissa has also returned to Zendikar to help the plane rebuild, tired of her plane-hopping exploits that led to death and defeat as often as victory.

You can also read my longer story summaries here. That'll do it for me this week, but I'll continue to come out with regular lore content in the lead-up to Zendikar Rising.