Welcome back, lore seekers! Over the last couple weeks I gave you a meta-breakdown of the returning characters of Commander Legends. This week I wanted to focus on the two planeswalker characters who deserved a bit more time in the spotlight: Jeska, Thrice Reborn and Tevesh Szat, Doom of Fools. 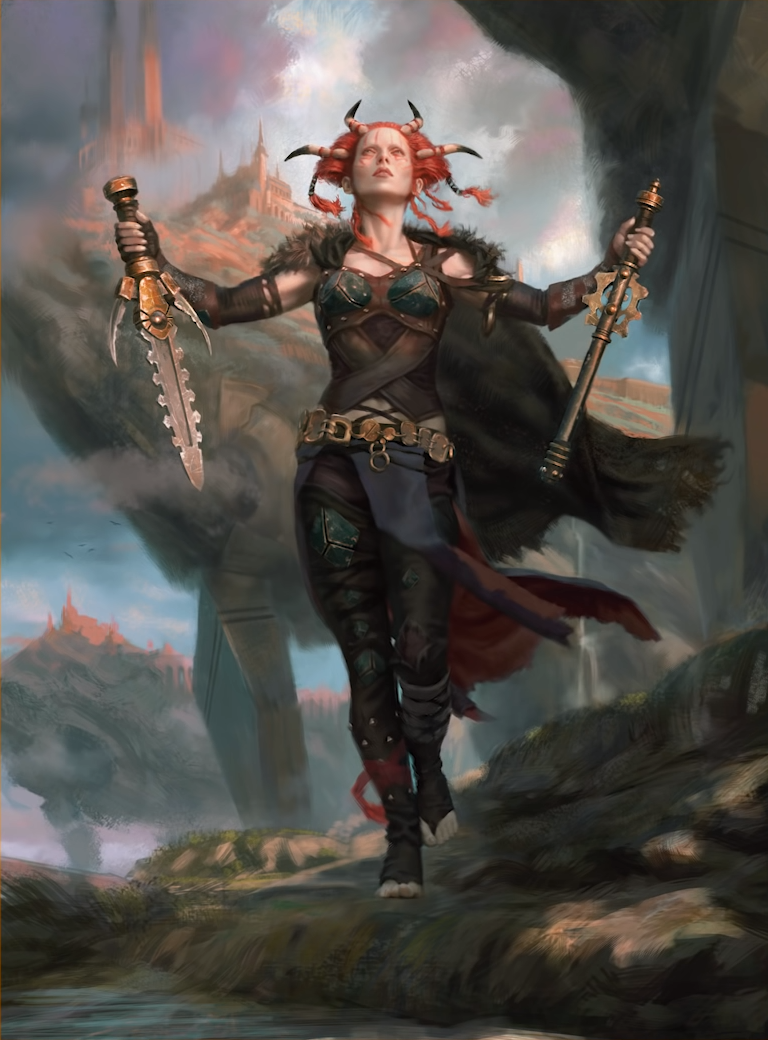 Timeframe: Odyssey through the Mending

Jeska is the most important planeswalker that very few people even know was a planeswalker. A Pardic Barbarian of Otaria and sister of Kamahl, Heart of Krosa, she was heavily involved in both the story of Odyssey block and that of Onslaught. Her name here, thrice reborn, refers to her in-universe moniker as "Thrice-Touched by Infinity". As a young woman, in an attempt to put a stop to her brother's obsession with the Mirari and uniting all the barbarian tribes through conquest, she was stabbed by Kamahl in a fit of rage. It doesn't look good for Jeska, and when the Cabal transforms her into an avatar of their dark god, she becomes Phage, the Untouchable.

When Kamahl, who has regained his senses, slays Phage in a single blow, alongside two other sort-of avatars (the angel Akroma and another woman, Zagorka), the power of the three fuse into Karona, False God. Upon Karona's destruction, Jeska is reborn as a planeswalker and apprentices with Karn, who takes the nascent planeswalker under his protection (as the Mirari mess was his fault, anyway). Karn travelled with Jeska across the multiverse, showing her the mathematically perfectly world he created, named Argentum (later Mirrodin and even later, New Phyrexia). 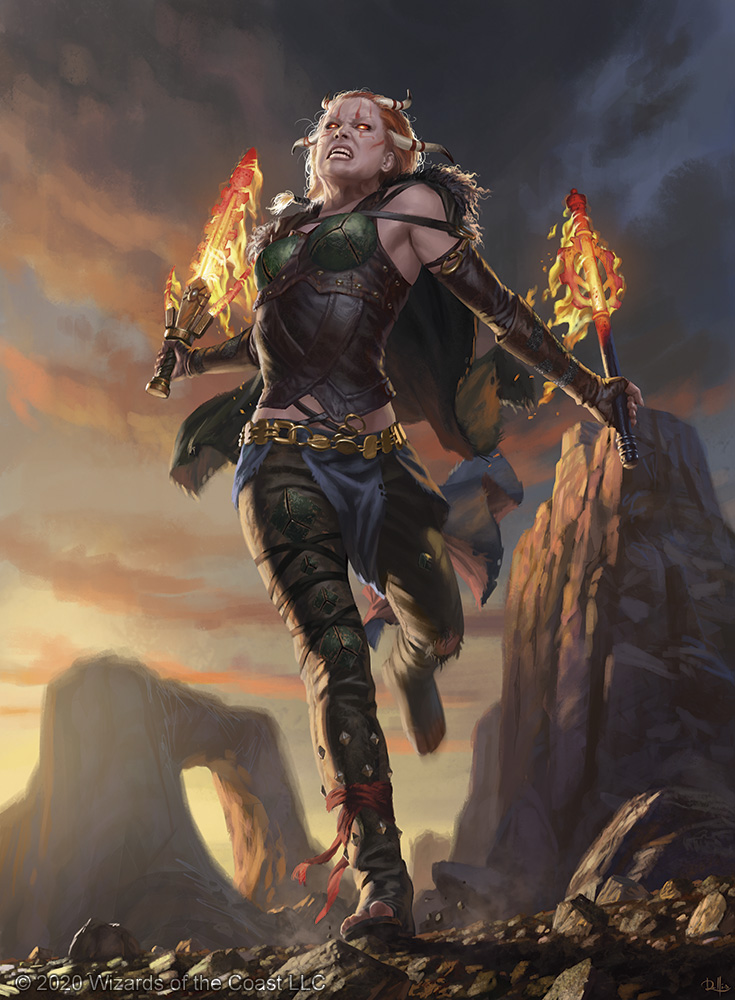 Jeska's biggest role came later, during the Mending. Karn responded to his old friend Jhoira of the Ghitu's beacon for help, and sealed the Tolarian Rift - one of many rifts in space and time caused by powerful magic throughout Dominaria's history - disappearing in the process (we'd find out where during Scars of Mirrodin). Jeska arrived and demanded to know where Karn was, and in learning of the crisis, decided to take matters into her own hands. She abducted Radha, Heir to Keld and used the half-elf warrior's rift-connected spark to seal several rifts (seen in Jeska's Will), burning out the younger warrior's spark in the process. Jeska sacrificed herself to seal the final and most dangerous rift caused by Karona centuries before.

Jeska was created in a time when the story direction took a sudden turn, a 'soft reboot' after years focused on the same narrative arc. The story, which for four years was storyboarded out on the cards, suddenly disappeared entirely (and would be gone for over a decade). Immediately following the Odyssey and Onslaught blocks, the focus shifted away from Dominaria and from planeswalkers entirely, only to bring them back a few years later in an event that killed most of the remaining notable planeswalkers (but didn't depict any of that in the cards). It's not a surprise, then, that most people didn't even realize Jeska was a planeswalker, despite being fans of Odyssey. It's only ever alluded to once in the cards, in the flavor text of Syphon Soul. Ever since we started getting new cards for old school planeswalkers, Jeska had been high on my list as a major character who hadn't gotten their due. 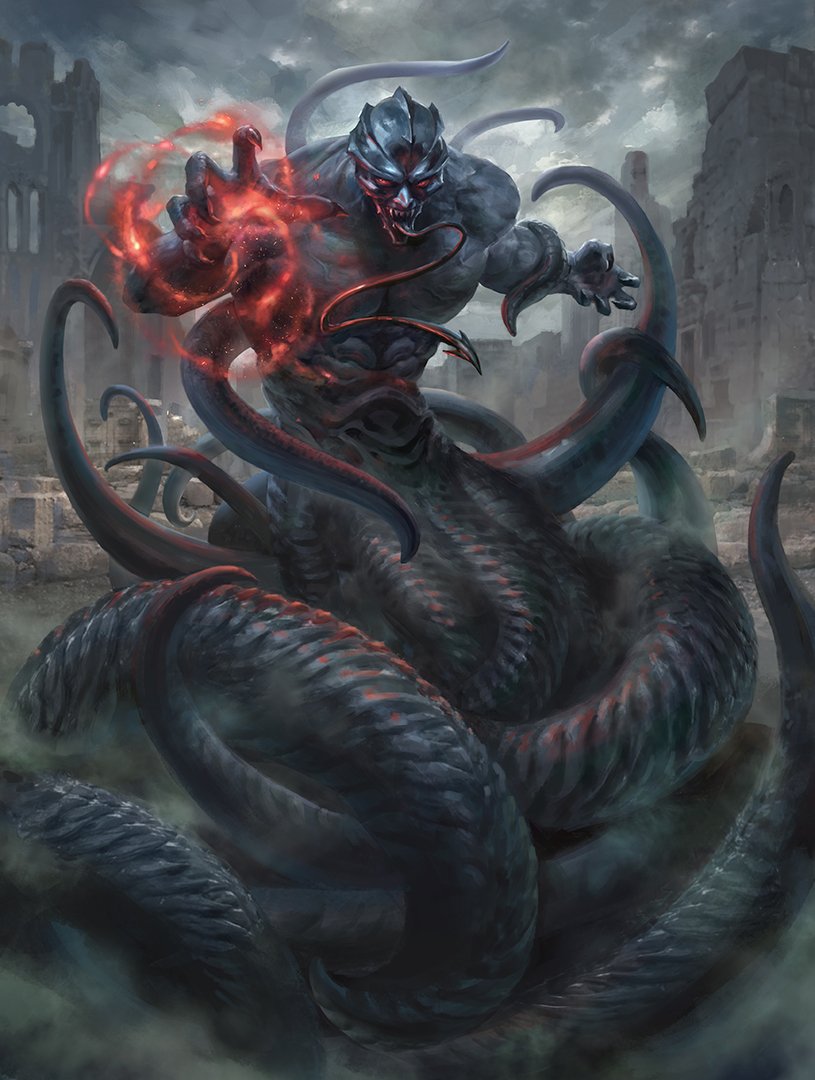 Tevesh Szat started life as Tev Loneglade, a planeswalker who travelled alongside his beloved sister Tymolin for centuries until she was murdered by Oliver Farrel, a zealot of the Sarpadian Empires. With the death of his sister, Tev took on the Tevesh Szat persona and transformed into a draconic form, and terrorized Dominaria for millennia. During the Ice Age, he orchestrated the downfall of the Kingdom of Storgard, which led to Freyalise, Llanowar's Fury igniting her spark. Centuries later, he was one of the planeswalkers attempting to escape the Shard, a magical barrier caused by the Ice Age that restricted planeswalker travel to just a handful of planes near Dominaria. He allied himself with Leshrac (one of the other planeswalkers that still needs a card) and escaped to Shandalar, where he and Leshrac were tricked and run off by Leshrac's minion, Lim-Dul, the Necromancer.

Centuries after that, he was one of the nine planeswalkers invited by Urza to be part of his Phyrexian assault team. The others warned (correctly) that Szat couldn't be trusted, and he went on to prove it by giving Darigaaz, the Igniter some Malicious Advice about reviving the Primeval Dragons. That advice led to near catastrophe as the dragons did not side with the people of Dominaria, dismissed the Phyrexian threat, and attacked the Weatherlight for invading the sky.

Urza's strike team, each equipped with customized Power Armor, attacked Phyrexia, only for Szat to quickly show his true colors, killing both the Ulgrothan planeswalker Daria and Jared Carthalion's love, Kristina of the Woods. Urza had planned for this, even counted on it, and used the device he'd hidden in Szat's Power Armor to kill the planeswalker and use his power to fuel the soul bombs, a massively powerful weapon to destroy the metal plane of Phyrexia. 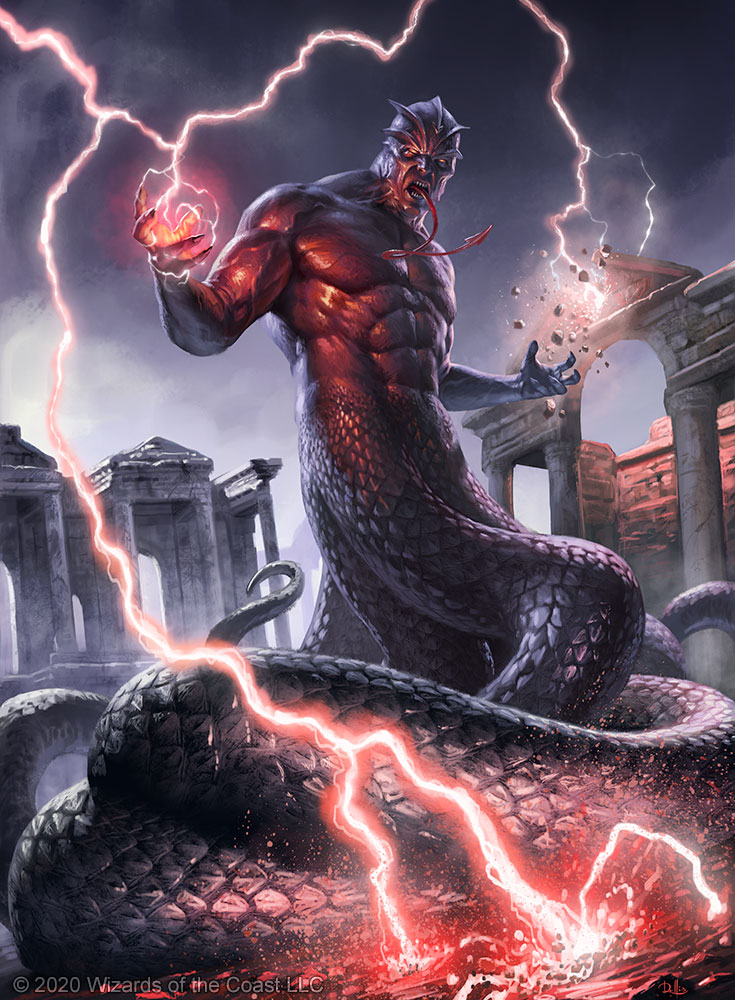 Yes, Urza invited Szat for the express purpose of killing him and harnessing his power to defeat Phyrexia. The other planeswalkers didn't take it well, especially Taysir, who was Daria's adopted father and Kristina's ex-lover. Urza killed him too. Fridging (I.E. killing a female character as a driver for a male character) was, unfortunately, something that happened a lot of Magic characters back in the day, but it was rampant at the end of the Weatherlight saga.

Tevesh Szat is one of the oldest planeswalker characters in Magic, first referenced in Ice Age and receiving his first card 25 years later (not quite surpassing Serra in terms of first introduction to first printing, but close). His planeswalker card artwork takes after his early armada comics design, rather than more reptilian design from his cards in Invasion. Szat is easily one of the most important characters in Magic's early history, as a major figure in the Armada comics and one of Urza's legendary Nine Titans.

While the Armada comics created a lot of planeswalkers, very few endured into future eras. Those that did were often re-introduced only to be culled in a major event, like poor Dack Fayden in War of the Spark. I'd love for Wizards to continue making cards for these important but overlooked planeswalkers in the future, from Jared Carthalion (who, yes, was a planeswalker in the old parlance), to Leshrac - the only major player from the story of Time Spiral to still not have a card.

Of other old school planeswalkers of note, we only have four of the Nine Titans, and only three if you're not counting un-cards or Legendary Creature versions. That doesn't mean I want Wizards to rush every old school planeswalker out, most of the names from the time aren't worth mentioning. But those that have appeared in card art or been named on cards feel like genuine missed opportunities so far.

That's all for this week, check-in with me again next week as I examine the Partner pairs that make the most sense, flavorfully!