Last time, I walked you through all the known Legends of Theros... save the gods themselves. Today I'm going to introduce you to the Theran Pantheon. The pantheon isn't cleanly divided by color pie, while the five mono-color gods are sort-of the 'major gods', two of the ten multicolored gods differ from the others in important ways. If you want to read some of the basics about the gods for yourself, check out these articles.

Note that what I present here is also derived from other lore, like flavor text, the novellas, and Magic Story articles. It's also the gods as they were presented in the original Theros block, as due to the metaphysics of Nyx, the gods are mutable. Also, please keep in mind that these are brief bios that don't necessarily get into their role in the story so far. If you want that, check out Preparing for Theros: Beyond Death. 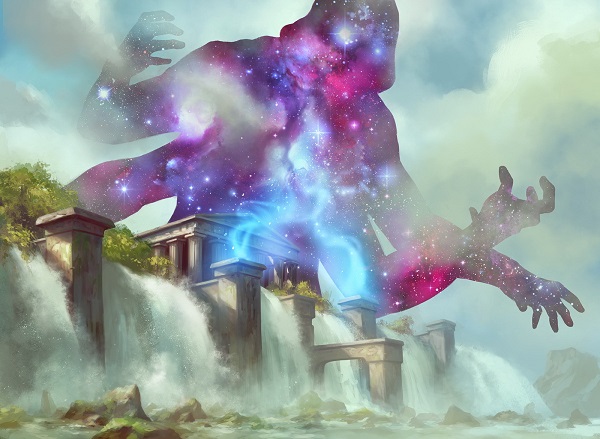 Dictate of Kruphix by Daarken

Domain: Horizons and the Unknown.

Kruphix is something of a mystery, even to the other gods of Theros. Clearly holding power and knowledge unknown to the other gods - including that the gods themselves are subject to mortal imagination. Of all the gods, Kruphix interferes in the mortal realm the least, and has been known to take action against the other gods when their conflicts threaten the world. 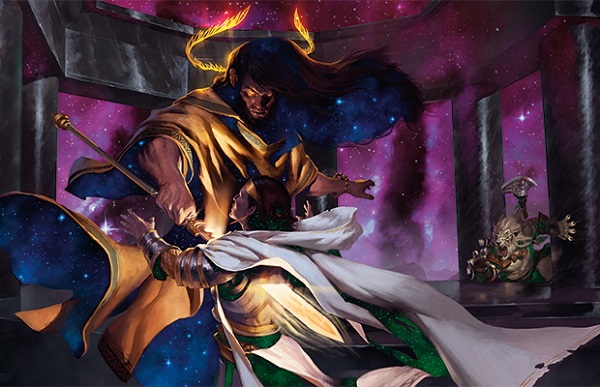 Cards: Heliod, God of the Sun, Dictate of Heliod, Hall of Heliod's Generosity, Glimpse the Sun God, Kytheon, Hero of Akros, Wrath of God, Starfield of Nyx Names and Flavor

Domain: The Sun, law, justice, retribution, and the bonds of kinship.

The prideful god of the sun believes himself to be the rightful head of the Theran pantheon. Heliod is known for good works on Theros: his temples are places of charity and public service and his name is invoked in matters of morality and legality. These notions belie Heliod's wrath, as the god of the sun is also known for smiting those who injure his pride, usually with Khrusor, the Sun Spear. 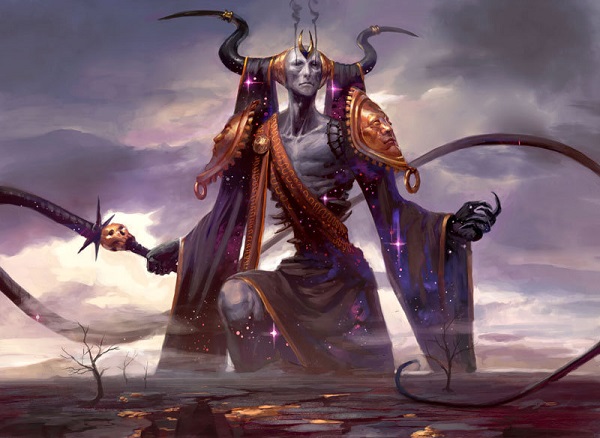 Erebos, God of the Dead by Peter Mohrbacher

Cards: Erebos, God of the Dead, Dictate of Erebos, Extinguish All Hope, Starfield of Nyx, Names and Flavor

Erebos, known as the Lord God of the Underworld, has dominion over the afterlife on Theros. Relegated to the Underworld aeons ago, Erebos resents his place but has accepted it. Likewise, he expects the denizens of his realm to accept their fates, heaping misery upon those that don't as he wields Mastix, his whip. 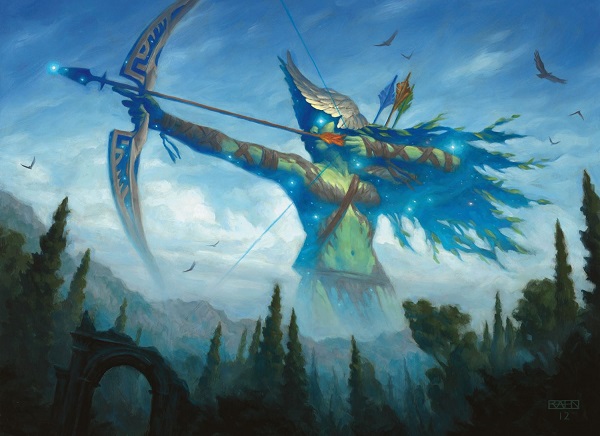 Nylea, God of the Hunt by Chris Rahn

Cards: Nylea, God of the Hunt, Names and Flavor

Domain: The Hunt, the seasons, the forest, predation and hunger, metamorphosis and rebirth.

Of all the gods, Nylea is the least likely to be actively involved in the affairs of mortals. When Nylea does get involved, it usually involves mortals infringing on nature in some way. Her fierce defense of the natural world stands in contrast to her fierce loyalty and compassion, a side of her most mortals don't typically get to see. 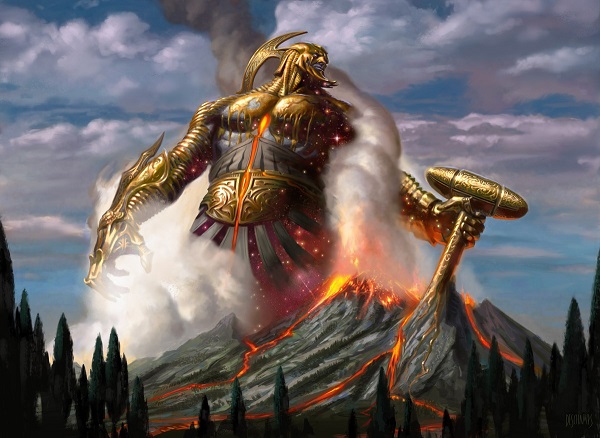 Purphoros, God of the Forge by Eric Deschamps

Cards: Purphoros, God of the Forge, Names and Flavor

Domain: The Forge, the restless earth, fire, artisans, obsessions, the cycle of creation and destruction.

Purphoros, also known as the Fire Bull, resides in his workshop in the heart of Mount Velus. The artisan god spends his time forging beautiful works of art, only to cast them back into the fires of the mountain and start fresh. Purphoros, jealous of the twin gods Iroas and Mogis, forged a twin for himself out of divine bronze, the nyxborn Petros. His hammer, Akmon, is said to spark new enchantments with every blow. 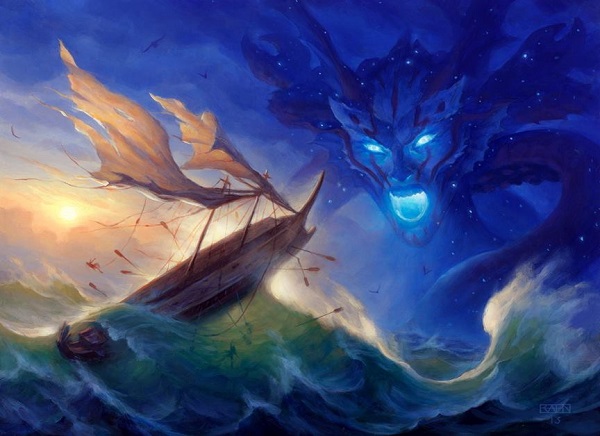 The god Thassa has perhaps one of the widest domains of the gods of Theros. Fiercely protective of the sea and her Triton worshippers, many would be surprised to learn that Thassa is a god of change and knowledge. Unlike the other gods, however, Thassa is nothing but patient, just as the sea whittles away at the land over the centuries, Thassa's goals can span eons. Her bident, Dekella, has the power to control the tides themselves, but has gone missing. 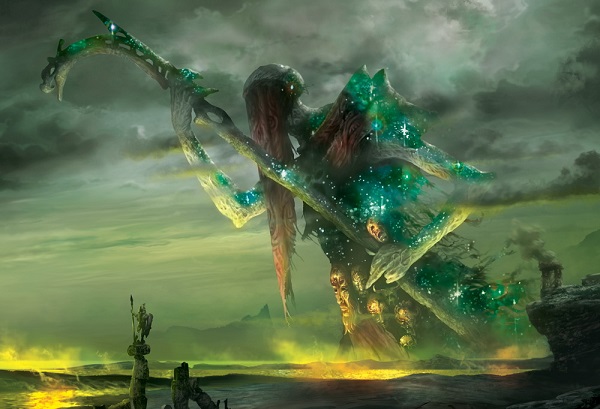 Athreos, AKA the Boatman or the River Guide, is the guardian between the border realm of the living and the dead. Silent and implacable in his duties, Athreos ferries the recently dead into the Underworld... and prevents them ever returning to the land of the living. 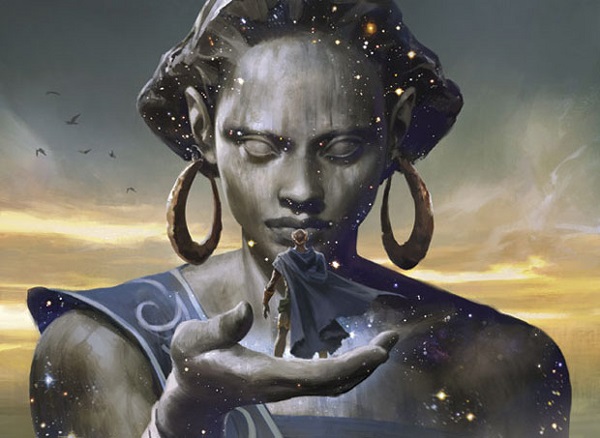 Domain: The polis, city-states, and building

Ephara, the patron god of Meletis, is the embodiment of the good that comes from building a city. Said to have aided Kynaios and Tiro of Meletis in liberating their polis, every building in the city honors her with a carving of her likeness. 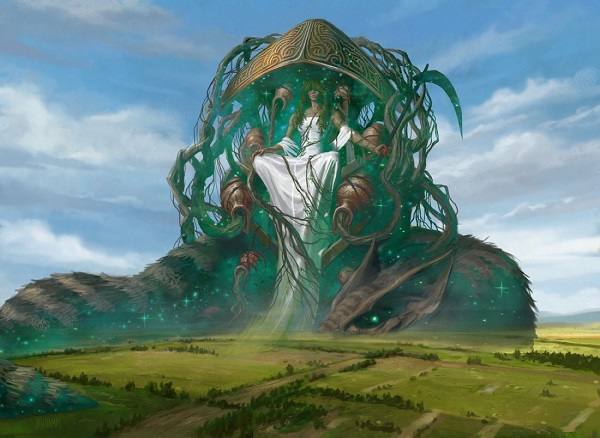 Cards: Karametra, God of Harvests, Commune with the Gods, Dictate of Karametra, Reap What Is Sown, Names and Flavor

More than any other god save perhaps Ephara, Karametra is on the side of humanity. The embodiment of community, Karametra is the patron god of Setessa, and is in fact Setessa's leader in absentia (although the actual day-to-day leadership of Setessa is handled by mortals). 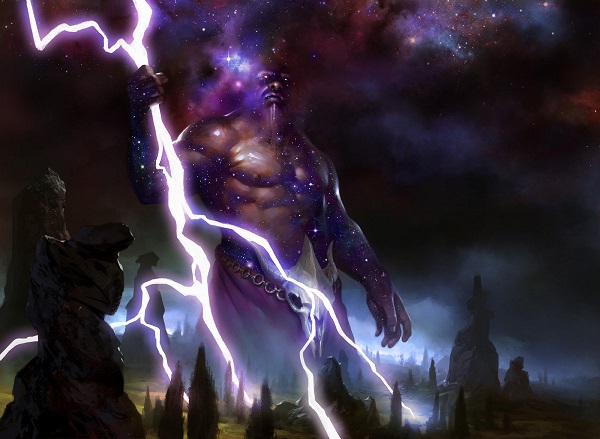 Keranos, God of Storms by Daarken

Keranos is by far the most mercurial of an already temperamental pantheon. The god of storms is known for blasting mortals with insights and lightning bolts in equal measure. 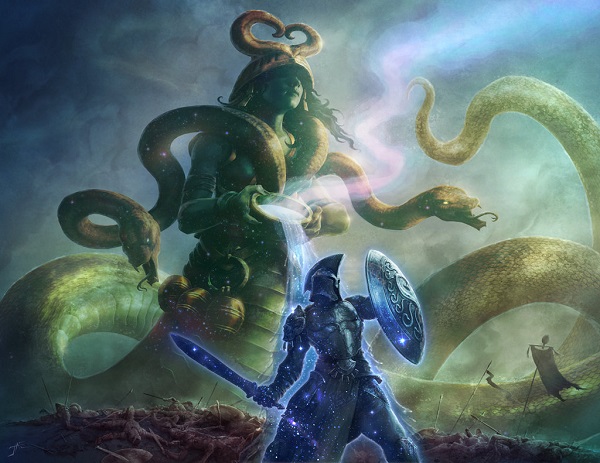 Nyx Infusion by Jason A. Engle

Pharika is one of the most misunderstood gods. Known as the god of affliction, Pharika embodies the duality of medicine: that any cure in large enough quantities can be a poison, and a poison in just the right application may be a cure. She hides her secrets in the natural world for intrepid mortals to discover. 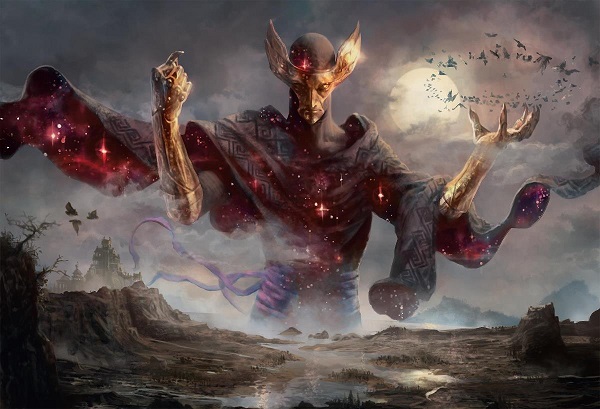 Phenax, god of deception, is the only god here not worshipped openly. Shrines to Phenax are hidden away in less reputable corners of the plane. Phenax is the patron of the undead Returned, and has worked to destroy poleis in the past to give them to his Returned. 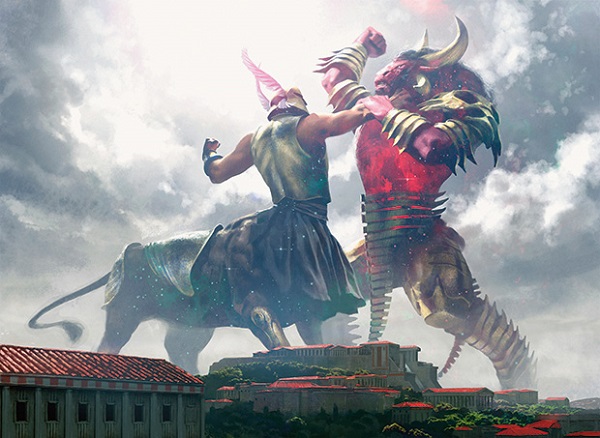 Dictate of the Twin Gods by Chase Stone

Iroas, the patron god of Akros, is the embodiment of noble ideas about war and combat. Favoring the honorable, Iroas himself is honored in Akros in the Iroan games, a contest of athleticism. Iroas is opposed by his twin, Mogis, who embodies the opposite side of war.

Mogis, the patron god of the minotaur, is the embodiment of the ugliness of war. Favoring the brutal and the cruel, Mogis is honored by the roving minotaur clans in the mountains around Akros. Mogis is opposed by his twin, Iroas, who embodies the opposite side of war. 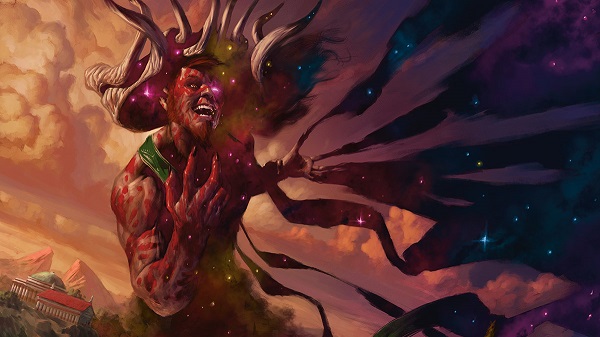 Xenagos was once a mortal planeswalker, who discovered the gods were a lie when he learned they held no sway on other planes. Xenagos's plan to bring down the gods by elevating himself among them was fraught with hypocrisy, and in truth it's as likely he just sought the power for himself.

That's it for my Theros articles prior to the release of Theros: Beyond Death. When we finally get there, I'll be doing a flavor gems article, but until then, keep an eye out for another article or two from me!