Welcome back, planeswalkers! Last time, I talked about the world of Theros and, in broad strokes, the story as well. Today I'm going to talk about all the Legendary Creatures from Theros... minus the gods. They're getting their own article later. There's lots to cover here, so let's begin.

Arixmethes is a kraken so massive that settlers once believed it to be an island. Building a small polis upon its back, the entire city was sunk and destroyed when Arixmethes submerged once more. Kiora, the Crashing Wave tried to claim it for her fight against the Eldrazi, but was defeated by Thassa, God of the Sea. 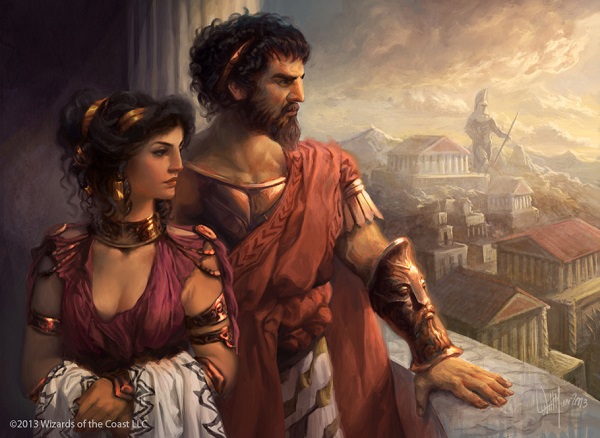 Anax and Cymede by Willian Murai

King Anax of Akros was small and weak as a young man. Despite being the eldest son, it quickly became clear that everyone in Akros favored his younger, but larger and more athletic brother Timoteus. Knowing his brother's nature, Anax trained to compete against him and prove his worth. In a public wrestling match, knowing he couldn't defeat his brother, he lured his brother into revealing his cruel nature, cementing his place as the honorable choice for king.

During the events of the original Theros block, Anax was wounded in battle in a duel with a minotaur named Rhordon the Rageblood. He insisted festivities go one while he recovered, and we haven't seen him in a story again since.

Queen Cymede of Akros was a brilliant and powerful mage who spread the worship of Keranos to Akros. One of her husband's wisest advisors, she also worked her magic in secret to support her kingdom. To save her kingdom from invading minotaurs in the original Theros block, she offered herself to Keranos and disappeared into a pillar of fire and light into Nyx. 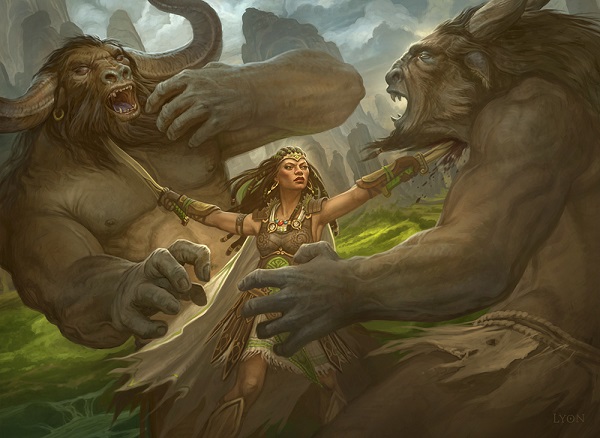 Anthousa is the commander of Leina Tower, the Setessan watchtower dedicated to defending the city. In her position, she is also the de facto leader of Setessa when Karametra, God of Harvests is not physically present. She was raised alongside Daxos of Meletis in Setessa and considers him like a brother. She fought alongside the Akroans during the minotaur invasion of the original Theros block.

The King of the leonin of Oreskos, Brimaz is a friend of Ajani Goldmane. He's a very popular king, and has invited in a human chronicler in the hope of mending relations between Oreskos and Meletis. His grandest hope is that one day, the leonin may be welcome back on their ancestral lands. 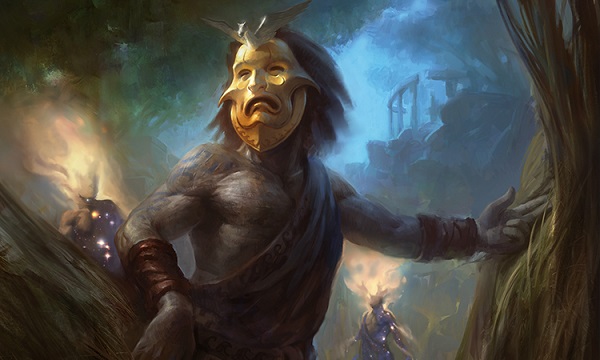 Daxos the Returned by Adam Paquette

Daxos is the most powerful oracle in living memory. Desired by all the gods, he was claimed by Heliod, God of the Sun. After losing his mother at a young age, he was raised as an Arkuli, an orphan, in Setessa, before taking over his duties as the oracle of Heliod's main temple in Meletis. He met Elspeth, Sun's Champion while she protected the polis from Polukranos, World Eater, and the two bonded and eventually fell in love.

Together, they led the defense of Akros during minotaur siege. Daxos was stabbed by Elspeth during the revel afterwards, when Xenagos controlled Elspeth's mind, making her believe he was a Phyrexian Negator. Elspeth made a deal with Erebos, God of the Dead to exchange her life for Daxos's... but Erebos interpreted the bargain cruelly, allowing Daxos to return to the mortal realm as an undead Returned instead of with true life.

Hixus was the Warden of Akros's prison. He saw something in young Kytheon Iora and decided to train the boy in hieromancy during his prison time. When Erebos released his Titan and the city was under siege, Hixus freed any prisoner willing to stand in the city's defense. 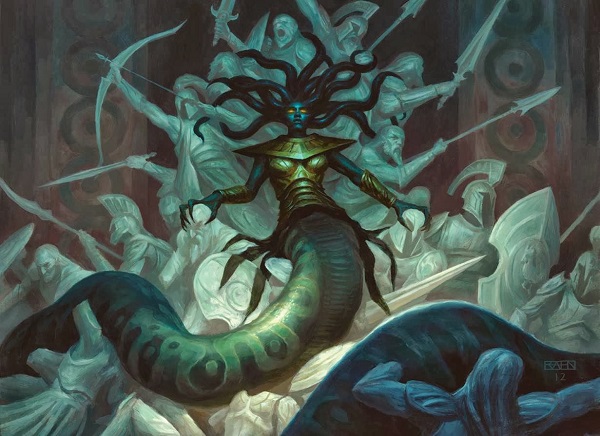 Hythonia the Cruel by Chris Rahn

Not much is known about Hythonia. She's a powerful gorgon who built a throne from her petrified foes. Hythonia is the obvious Medusa parallel on Theros.

Kalemne is a giant who worships Iroas, the God of Victory. She leads supernatural troops into battle. 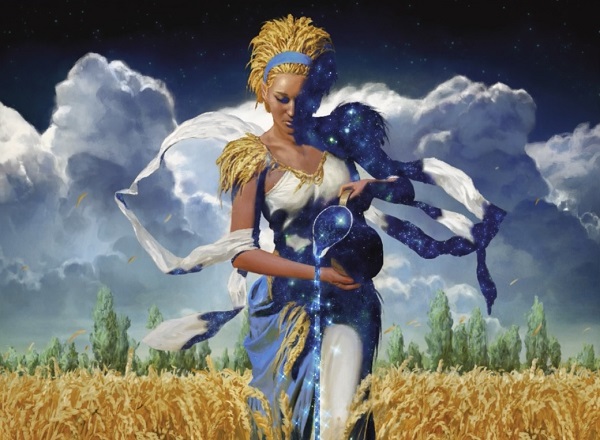 Kestia is a Nyxborn nymph, a creation of the gods. She is unique in that her domain extends beyond the ordinary limitations of fields, river, and forest but instead encompasses all three. She is a nymph of farming, overseeing fertile fields, crop growth, and irrigation.

Kydele is an oracle of Kruphix. She was captured by Xenagos, the Reveler, but revealed that she was only there to spy on the satyr planeswalker for her god and disappeared. Since then, she's returned to the edge of the world where she sits by Kruphix's side. She is one of the few mortals in the world to know the truth about the metaphysics of Theros and that there is a wider multiverse, as Kruphix is quite candid with her. 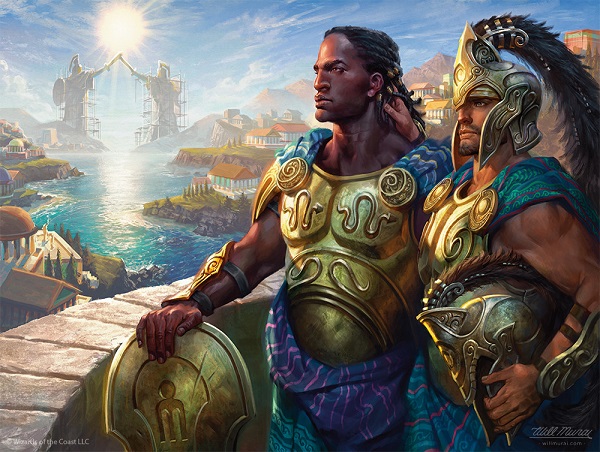 Kynaios and Tiro of Meletis by Willian Murai

Cards: Kynaios and Tiro of Meletis, Guardians of Meletis

Kynaios and Tiro were the leaders of the revolution to overthrow the archon Agnomakhos, the tyrant who once ruled what would become Meletis with an iron fist. The lovers would be crowned the first kings of Meletis (although a council called the Twelve would eventually take governorship). Statues built in their honor, called the Guardians of Meletis, guard the east and west of the polis. 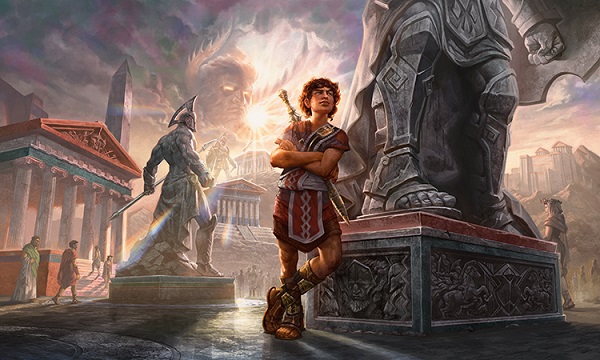 Kytheon Iora was a young orphan who founded a street gang called Kytheon's Irregulars, dedicated to stealing from the rich to help the less fortunate. He was caught and arrested, but serving out his sentence, he attracted the attention of Hixus, Prison Warden, who trained him in hieromancy. Kytheon was freed to aid in the city's defense, and became a champion of Heliod who commanded him to destroy Erebos's Titan, the cause of the city's woes. Kytheon's Tragic Arrogance had him take on Erebos himself, resulting in the death of his friends... although Kytheon's body was never recovered.

King Macar is the King Midas parallel of Theros. There isn't really any other lore on him.

Medomai is a sphinx oracle that returns to Meletis during times of great import, residing in the Observatory. He delivers prophecy of the future that can be cryptic, and most often dire. It is Medomai who warns Daxos that his death will come at the hands of someone he loves. 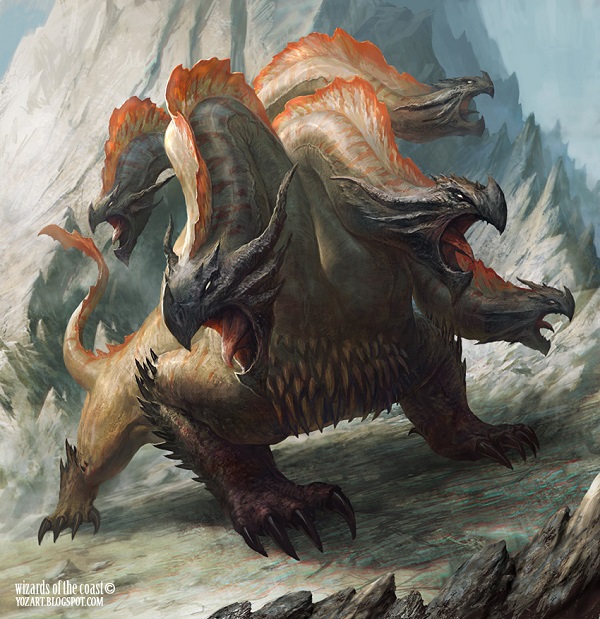 The hydra Polukranos was so destructive - and majestic - that he was brought into Nyx and enshrined in the sky long ago. When Purphoros, God of the Forge attacked Heliod with Godsend, he dislodged Polukranos from his place in the sky. Nylea, God of the Hunt and Heliod sealed him into the Nessian Forest, but Xenagos's machinations released him on the plane, until he was killed by Elspeth. 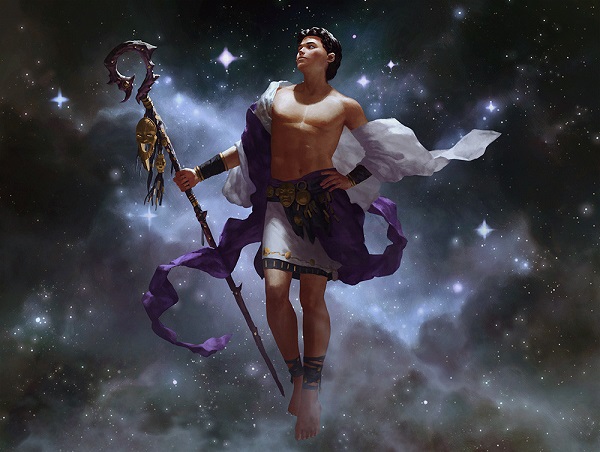 Story: It's Time to Talk Commander (2016 Edition), War of the Spark: Ravnica (mentioned)

Ravos is an oracle of Athreos who, in exchange for being able to see his deceased wife in the Underworld once a year, assists Athreos in ferrying souls into the Underworld. In secret, Ravos smuggles some of those souls out, as well, including the infamous thief, Dack Fayden.

Thrasios is a legend of some renown, he lives in the coastal polis of Meletis after Meletians helped him fend off marauding minotaurs attacking his family. He's an explorer of the depths, and has reportedly discovered the fabled ruins of Olanitin, a coastal polis sunk by Heliod.

The Triad of Fates is a mysterious group that twines the threads of destiny.

Tromokratis is a kraken... that's about all we know about this one. 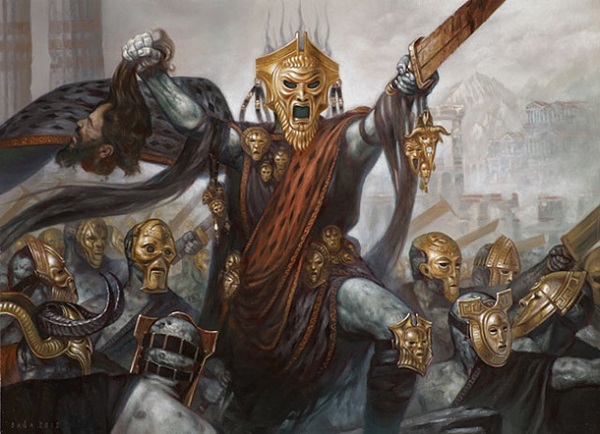 Tymaret is the vicious Returned that leads the necropolis (in this case, not meaning a crypt-like location but instead a city inhabited by undead Returned) of Odunas in raids against the living.

Tymna was an Meletian Battlewise (a sort of wizard-soldier), but a chariot accident left her blind. Turning herself to weaving, Tymna is now a master of fate, weaving intricate tapestries as she manipulates destiny.

With so many Theran Legends, there was obviously no room for an article on the gods here. Stay tuned as I dive into the gods of Theros, next!