Yesterday we got our first real taste of the world Kaldheim, as Wizards of the Coast brought in a death metal band and Jimmy Wong to their launch stream in an amusing yet exciting crossover. Kaldheim is a Norse mythology themed set that brings both new mechanics as well as new twists on existing mechanics.

So, let's dive right in! 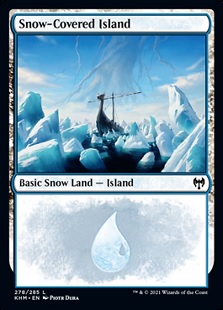 Snow as a mechanic hasn't had the greatest run. While originally released in Ice Age before many of today's Magic players were even born, it had very little functional value. It was revisited again in the somewhat maligned Coldsnap, which did give us a few interesting snow cards in Skred and Scrying Sheets. Modern Horizons is the set that actually put snow on the map, with Arcum's Astrolabe getting banned in multiple formats and much more powerful snow cards like Dead of Night and Ice-Fang Coatl. Now we're seeing what snow gets to do in a Standard set that's not supposedly "a long lost design file."

A cycle of common taplands has been fairly, well, common in sets in the last few years, but Kaldheim throws us a frosty twist with some snow duals. We've seen the allied versions of these like Boreal Shelf in Coldsnap, but these new Kaldheim versions have a huge difference: basic land types!

The first thing to jump to is how these interact in formats with fetchlands, as any snow deck in Modern or prior had to be primarily based on basic lands, but there are other interactions as well. Anything that searches for a basic land of a certain type can get these, which is big game for any sort of Farseek effect that may pop up across various formats. These aren't super exciting or flashy, but will definitely see significant play in small, fetchable numbers.

There haven't been any actual snow cards revealed save for Frost Bite, which gives us a glimpse into what we may be dealing with. Essentially a mixture of Skred and Scorching Dragonfire, Frost Bite is a very solid removal spell in Standard, but the lack of ability to go to the face does limit its usefulness. Still, seeing snow on an instant is certainly interesting, as we can only assume that there will be various things that trigger on or care about snow cards.

I'm looking forward to see how this one is fleshed out.

At this point Sagas almost feel evergreen. The exist in an excellent space between planeswalkers and sorceries that play great and always manage to tell a flavorful story. For a plane inspired by real world mythology, the storytelling angle fits right in. It's also important to note that Theros Beyond Death is still legal in Standard, and with it the constellation mechanic and other "enchantments matter" cards. 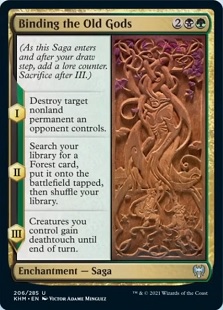 Our new saga to look at is Binding the Old Gods, which is basically Deathsprout done right.

Four mana for a Vindicate is very reasonable in Standard, but we get more upside as well. Chapter two allows us to Rampant Growth for a Forest (may I suggest a snow dual?) and put it right into play, which is already very nice value for four mana. Chapter three is a bit odd, but deathtouch is a powerful mechanic that can let you attack into bigger creatures or maybe put together some odd synergies in the vein of Status // Statue and Goblin Chainwhirler.

This is a great midrange card, and that's to say nothing of how it may interact with enchantment synergies. This is one to watch.

In a surprising twist, we see the return of the changeling mechanic from Lorwyn. One of the things that made that Limited format so interesting, changeling never really had many cards that got there on rate for Constructed aside from Chameleon Colossus. In fact, the best changeling ever, Mutavault, doesn't even have changeling!

While it's not the main focus, there certainly seem to be tribal themes in Kaldheim, which makes changelings very valuable. 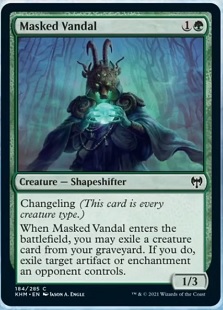 Something like Masked Vandal doesn't really wow you like Questing Beast, but it is going to see a ton of play across all formats. A Naturalize that I can Goblin Matron for? Sign me up! Masked Vandal is just what the doctor ordered for many different tribal decks; a creature of the right type, which can therefore synergize with the rest of the deck, but can do the job a spell would normally do.

And of course, changelings love to party!

A changeling doesn't fulfill the entire party requirement, but acts as a wildcard to fill any hole you may have. This is extremely valuable and is probably exactly what party needs as a mechanic to make it in Constructed.

On two our two new mechanics!

Somewhere between suspend, morph, and echo, is the new mechanic foretell.

Foretell spells can of course be played as normal, or they can be put face down into exile for two generic mana. Then any turn after the one you paid to put it into exile, you can cast the spell during any time you could normally cast that kind of spell for its foretell cost. You can't foretell a spell in the same turn, so you must wait until at least your opponent's turn if it is an instant, or your next turn otherwise.

Foretell allows you to break up the payments for a spell over multiple turns, delaying your access to it but allowing for smaller partial payments. This is useful as far as curve concerns, as you can fill in any gaps, allowing you to double spell more quickly and have more options. But the interesting part is once you place the card face down in exile your opponent needs to wonder what it is. Like morph, this will probably matter much more in Limited, but it's fun to see how it will play out.

As for the cards themselves, both are unassuming but have the look of powerhouse, first pickable commons as the rate you are getting is excellent. I'm looking forward to seeing if enough of these are pushed in Constructed to make for an interesting guessing game or not.

The other new mechanic cares about attacking but in a very interesting way - all boast wants is to see your creature attack. It doesn't matter if it's a 1/1 attacking into a 20/20 Marit Lage token, which is frankly an odd thing to boast about, but if the deed is done you can activate it.

The boast preview card is a wild one in Varragoth, Bloodsky Sire.

Two mana for a Vampiric Tutor? On a 3-drop creature? It's hard to know exactly what you want to do with Varragoth, as typically tutor effects are more reserved for combo decks which don't want to play creatures, but the rate is there. The idea of having some sort of cool aggressive or midrange deck with a toolbox is kinda awesome and Varragoth's body is reasonable enough.

Boast is probably going to be a key Limited mechanic, as most combat mechanics are, but considering it only has to do with attacking and is especially good if your opponent doesn't have blockers it's got a great chance to be a player in Constructed as well.

Whosoever Shall Hold This Hammer

Kaldheim is looking awesome so far. From the fun metal-themed promotion to the creative take on Norse mythology, this is one of the most exciting sets in recent memory.

With Standard finally out from under the shadow of Uro, Titan of Nature's Wrath and the many other design mistakes of 2020, I am extremely excited for a new and fresh Standard format to play in. With the pathway lands done and snow lands to consider, we've got flexible mana bases to work with and tons of themes to mesh together with Theros and Eldraine.

That is, if we are worthy!