Last weekend saw one of the most exciting events in the history of Magic: the Gathering, the Mythic Invitational held at PAX East. 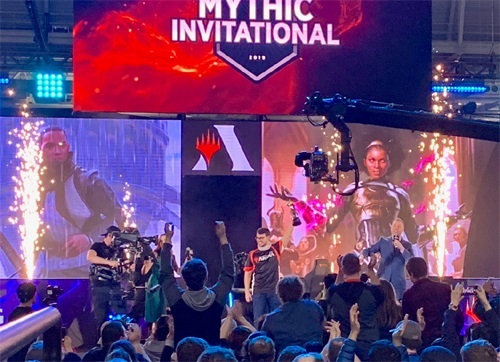 With MTG Arena taking center stage, a total prize purse of a million dollars on the line, and a new all time high of over a hundred thousand concurrent viewers, the event was a smashing success. While there were grumbles about Duo Standard as a competitive format, there's no doubt that Best of One is a valid option on MTG Arena.

But of course, that leads us to an interesting problem:

What if I'm new to the game and either used to Best of One on MTG Arena or want to play the decklists from the Mythic Invitational in a tournament?

Luckily I'm here to help you through!

For the uninitiated, a sideboard is 15 cards you bring with you in addition to your deck whenever you play in any sort of tournament event. These cards allow you to shore up weaknesses you have against certain decks and level the playing field in bad matchups. You may have seen Esper Control mirrors at the Mythic Invitational where each player had a fistful of dead cards like Kaya's Wrath and Moment of Craving that didn't do anything; sideboarding allows you to readjust your deck for games two and three of a match so these things don't happen.

Of course, then after you board our all of your removal your clever Esper Control opponent sideboards in Thief of Sanity and Lyra Dawnbringer and crushes you while you sit there helpless staring at Duresses and Negates!

Sideboarding not only allows you to bring in better answers to you your opponent's strategy, but also has tons of room for cleverness and innovation as well. There's a reason that sideboards have been a part of tournament Magic for over twenty years and proper sideboarding strategy is one of the most difficult parts of the game to master. Crafting a good sideboard strategy requires understanding how each of your matchups is going to play out, and using that information to prepare a concrete plan to execute.

Today we are going to look at the three most popular decks from the Mythic Invitational and talk about what kind of cards they would want in their sideboards and the reasons why.

We'll start with one of the primer aggressive decks in the format, White Weenie.

There's no doubt that the main plan of White Weenie is fairly simplistic: build a board very quickly, augment that board with Venerated Loxodon and Unbreakable Formation, and kill your opponent. Of course with such a simple plan, you need to be aware that your opponent will be bringing in the exact kind of cards to blunt your strategy- mass removal spells like Cry of the Carnarium, extra removal like Shivan Fire, as well as life gain and things that punish small creatures.

As such, the linear aggro deck's plan is to sideboard in good answers to those answers. How do we do this?

While completely unnecessary in Best of One play, this is often accomplished by adding a color to give you access to things that you don't usually have access to. Most White Weenie decks in traditional best of three use this Blue splash but don't actually play any Blue cards in their maindeck. Instead, the Blue reactive cards are relegated to the sideboard to help blunt the cards your opponents want to use against you.

Cards like Negate, Spell Pierce, and Disdainful Stroke are fantastic when you are pressing an advantage, punishing your opponent by countering their one key spell that would swing the game in their favor. If your opponent goes to cast their Kaya's Wrath on turn four and it doesn't resolve, the game will usually end on the spot.

With Blue in the mix we end up with a sideboard that looks something like this:

Against control decks and combo decks our countermagic allows us to interact on an axis not previously available to us, while we've got extra removal in Baffling End for the more aggressive matchups. Lastly we have Tocatli Honor Guard as our primary plan against explore-based Sultai decks that also shuts down Hostage Taker. It serves double duty against Mono-Red as a way to turn off Goblin Chainwhirler and Viashino Pyromancer.

As for what to sideboard out, you just need to identify the cards that are least effective in each matchup, making sure to take into account what your opponent's deck will look like after they sideboard. Benalish Marshal is very poor against Mono-Red Aggro and all of their copies of Lightning Strike and Wizard's Lightning, while Venerated Loxodon will often force you into over committing against control decks with mass removal.

Sideboarded games tend to slow down a bit compared to Game 1s because each deck has more good answers and less threats, so don't be afraid to take out fast but less effective cards like Rustwing Falcon.

Mono-Red Aggro is the format's other tier one aggressive deck, and it follows a similar paradigm to Mono-White Aggro.

Your plan is straightforward and aggressive, with little room for interaction other than just killing your opponent dead. However, unlike being scared of cards like Kaya's Wrath and Cry of the Carnarium, now we are more scared of things like Moment of Craving, Lyra Dawnbringer, and enemy Goblin Chainwhirlers.

Because all of its burn spells can also double as creature removal, Mono-Red Aggro is a deck that benefits greatly from transformational sideboarding. It is very common for Red decks to feature a strategy shift, boarding out the smaller weaker creatures for more removal and larger threats like Rekindling Phoenix or alternate ways to win like Treasure Map plus Fight With Fire. The most important thing when doing something like this though is to have a clear plan of what you want your deck to look like after you sideboard in each matchup.

Against creature decks you can board out your weaker creatures for more removal in Lava Coil and more card advantage elements like Dire Fleet Daredevil and Treasure Map, pairing them with Experimental Frenzy to win the long game. This works wonders against people overloading on things like Moment of Craving and other early creature removal, or small ball lifegain effects.

Cindervines gives you a great card against various Wilderness Reclamation decks as it's important to note that Nexus of Fate is legal in Best of Three play. Lastly, Collision // Colossus gives you a clean answer to Lyra Dawnbringer, one of the more devastating cards to play against.

But wait Jim, I thought you said the Mythic Invitational didn't allow sideboarding?

In an amusing bit of irony, building sideboards was actually necessary for many decks in the Mythic Invitational, because you are only allowed to access cards "from outside the game" if they are in your sideboard. Even though you never got to actually sideboard, you needed to have a sideboard to have a pool of cards to get with Mastermind's Acquisition. You also would want to build a sideboard of Mastermind's Acquisition targets even if you aren't playing it, but are playing things that could possibly cast it from your opponent like Dire Fleet Daredevil, Expansion // Explosion, or Thief of Sanity.

It is certainly amusing that Wizards of the Coast wanted to keep things simple for this event so they skipped out on sideboarding, only to have to explain what a sideboard is anyway.

Sideboarding with a control deck is largely about making sure you can line up the right answers against your opponent's threats, while also having a good plan for matchups like the mirror or combo when removal spells aren't good. It is critical to select the proper answers for each matchup, but also critical to consider how your opponents are going to sideboard against you. Duress may not seem like a great card against White Weenie, but if you know they are bringing in Negate to stop your spells you may want to be able to preempt that.

The sideboard dance with a control deck is a delicate one, and can leave us with something like this:

If our White Weenie opponent is going to cut their removal spells and bring in Negate, we bring in Hostage Taker and Lyra Dawnbringer! This sideboard has a good mix of extra reactive cards that are good in their respective matchups, while also having a nice package of creature threats to bring in against other control and combo decks to help provide early pressure.

As for what to take out, it's usually easier than it is with proactive decks because it isn't hard to figure out which answers are bad in any given matchup.

By far the most important element of sideboarding is figuring out what you want your overall plan to be, based on both what you think your opponent's plan will be as well as how you think the games will play out.

You want to beat Mono-Red Aggro with your White-based midrange deck so you bring in 4 Shield Mare and 4 Fountain of Renewal to gain tons of life so they can't kill you. Sounds great right? There's no way they can beat you if you've used a huge eight sideboard slots against them!

There's just one problem - Mono-Red Aggro is not a burn deck.

The presence of Experimental Frenzy means that if you give them enough time they will literally be able to cast every spell in their deck, something no amount of small-ball lifegain can overcome. By trying to sit back and gain life you are trying to extend the game and extending the game is exactly what the Experimental Frenzy player wants to do - especially if they've boarded out some of their weaker creatures for bigger elements.

"But I drew five sideboard cards and still lost!"

You've misevaluated how the matchup is going to play out and end up taking an embarrassing loss because you didn't have a good plan.

It's also one of the areas of Magic with the most strategic depth. Take your time and think long and hard about how your matchups are going to play out, formulate a good plan for each matchup, and then take your time to craft your sideboard so you know exactly what cards are coming in and going out so you can execute your plan.