I've said my peace, 5,000 words of it fact, all about potential reprints for Modern Horizons. However, it's now time to get past the theoretical and get into what we will really be working with in Modern going forward. Don't forget that Modern Horizons also has new cards in it, and Wizards of the Coast wants these cards to see play.

Well hold on to your hats, because today's preview card opens quite the can of worms! 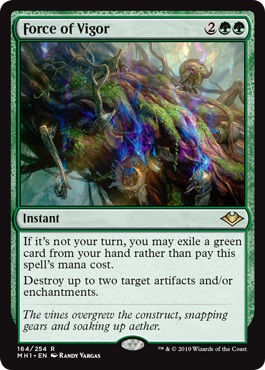 Pitch spells are back! There's a lot to say about what Force of Vigor means for Modern Horizons as a whole, but let's not get ahead of ourselves.

It's pretty clear that Force of Vigor is not a maindeck card. Free spells are inherently a dangerous thing, so it makes sense to make them reactionary rather than proactive. Pitch spells serve to be an answer to a threat that is coming on too fast to handle by paying mana, or an answer you can play while still using your mana to further your own game plan. The downside is that while you save on mana, you lose out on a card.

Force of Will is inherently card disadvantage; they cast Goblin Charbelcher, you use Force of Will and another card to stop it. They spent one card and some mana, you spent two cards. Of course, the good news is that you are still alive, and realistically your opponent probably spent a bunch of their resources to even cast the Charblecher. With so many powerful things available in Legacy this is why Force of Will is such an important catch all, but it sure does feel bad to have to Force of Will a Delver of Secrets or Tarmogoyf because in those fair matchups the card disadvantage really matters.

Force of Vigor changes the math considerably, as you can kill two things with it instead of one. Trading two for two is much more palatable than two for one, making Force of Vigor a brutally efficient way to deal with multiple artifacts and enchantments. But of course, we're only really interested in Force of Vigor if we have that need.

There's likely two ways Force of Vigor will be used, the first being as a splashy artifact/enchantment hate card in the vein of Shattestorm or Ancient Grudge. While you lose the ability to destroy everything, you gain the blowout potential of operating at instant speed while tapped out.

The second is for decks that don't care about the extra card at all and are just looking for a cheap way to remove troublesome permanents so they can do their thing. Neoform Combo is a perfect candidate for this, as they just need to get that Grafdigger's Cage out of the way as cheaply and quickly as possible, card advantage be damned.

The deck-building requirements for Force of Vigor are steep, as you need to want one of these two effects while also playing a good critical mass of Green cards, but if the requirements are met the payoff is high. Not a ton of decks are going to want Force of Vigor, but for the ones that do its impact will be substantial.

It's important to note that Force of Vigor's reach goes far beyond Modern.

Force of Vigor is even better in Legacy, where troublesome cards like Chalice of the Void and Blood Moon are much more common. Because of the power level of Ancient Tomb and City of Traitors hateful artifacts are much more common, and not only that but they are much more effective because of the high density of one-mana spells and non-basic lands that are commonly played. Just imagine the look on your evil Mono-Red Prison opponent's face when you destroy his perfect draw of turn one Chalice of the Void, turn two Blood Moon with only two cards and no mana! Being able to destroy a Batterskull and Aether Vial at instant speed while tapped out sounds pretty nice too, as well as a multitude of other more niche applications.

Once again though, finding a deck with enough of a critical mass of Green cards that wants the effect isn't going to be that common, but when Force of Vigor is cast the impact is going to be game breaking.

There's more to Force of Vigor however than just the card itself, as it opens up the Pandora's box on a new cycle of pitch spells. Despite the name reference it is still very doubtful that Force of Will proper is in the set, but I wouldn't be surprised if there is some sort of variant as the Blue entry into the cycle. Note the "if it's not your turn" clause on Force of Vigor; something like this on a Force of Will variant so you can't use it to protect your own spells makes a whole lot of sense. Here's my prediction:

If it's not your turn, you may exile a blue card from your hand rather than pay Force of Wherewithal's mana cost.

The long-standing complaint about Modern is that here just aren't enough answers for all the powerful things that people get to do. As such, the best thing to do is just pick something powerful and try and race whatever your opponent is doing. Wizards of the Coast has never had an opportunity to answer this complaint directly until now with Modern Horizons.

Seeing a cycle of pitch spells does not surprise me, nor would I be surprised if the entire slant of the set was toward more fair and interactive strategies. The only question is how far does Wizards of the Coast want to tip the scales. Modern has been one of Magic's most popular formats for a long time, making it a risky prospect to throw it into upheaval and turn it into "Legacy-lite" or something else that doesn't resemble where it's currently at.

Well that's all for today; pardon me while I go ponder what the other three pitch spells are going to do. What do you think?