The Pro Tour, yes the paper Pro Tour we all knew and loved, returns soon! However, until then we've still got one MTG Arena Set Championship left and it's a doozy! 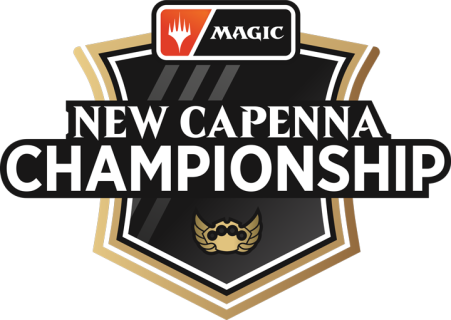 Kamigawa: Neon Dynasty and Streets of New Capenna have been really exciting for Standard, a format that has seen troubled times but has really rebounded nicely. However, there hasn't been an important Standard event in a very long time to show it off. The last Set Championship was Historic and Alchemy, and without regular events like Grand Prix or the SCG Tour, Standard has mostly flown under the radar.

This weekend we will get to see the game's best and brightest compete in both Standard and Historic for a $450,000 prize pool, and more importantly slots at the World Championship later this year. There's a lot on the line, but perhaps what makes this event most compelling is how unexplored Standard is as a competitive format in recent memory. This leaves a lot of room for innovation and I'm very excited to see how things shape out.

I'm also playing in this event, so consider this article to be an inside job!

That being said, here are my five predictions for the Streets of New Capenna Set Championship:

Prediction One: Naya Runes Is Going to Have A Positive Win Rate

Isn't Naya Runes one of the better decks in the format? Why would it be a hot take to say that it would have a record that is at least ever so slightly better than average? Well, you don't need to look back too far to see why. If you're squeamish you may want to look away: 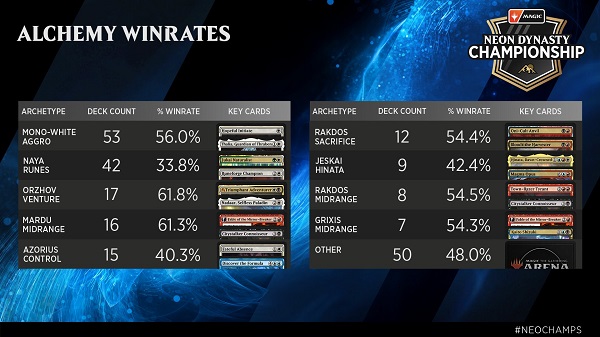 At the last Set Championship, which admittedly was Alchemy not Standard, Naya Runes had the worst win rate of any heavily represented deck I have ever see in a major Magic event, perhaps even in the history of the game. Anything under 40% would be shocking, but 33.8% is a number beyond reckoning for a deck that had 42 players in the field.

Going into the event it was the only deck in the format that felt like a known force, so players went out of their way hard to beat it. We're talking maindeck Archon of Emeria everywhere, Annul, Farewell... the list goes on and on. There was even a Mono-White Aggro deck with maindeck Thalia, Guardian of Thraben, Archon of Emeria, and Skyclave Apparition that looked like it was specially built solely to beat Runes.

I don't think this is going to happen again.

It's the various midrange decks like Esper and Jund that have all the momentum going into this event, and I'm sure almost all players are very aware of what happened to Runes last time and won't want to make the same mistake twice. Good players often tend to shy away from playing linear decks that can be hated out, and as such, the fear isn't there and people won't be as prepared.

I'm betting on it, because I'm playing Runes in the event, so hopefully I'm right!

Prediction Two: There Will Be More Than a Dozen Copies Of Fable Of The Mirror Breaker In The Standard Top 8

If the Kamigawa Neon Dynasty Set Championship was the coming out party for Fable of the Mirror Breaker // Reflection of Kiki-Jiki, the Streets of New Capenna Set Championship will be the event that cements its place as the best card in the format.

Yes, you read that right.

Not Eskia's Chariot. Not Goldspan Dragon. Not The Wandering Emperor.

Fable of the Mirror Breaker is the best card in Standard, full stop. It's the cornerstone of every midrange deck, I'm playing four copies in my Naya Runes deck, and it's even seeing play in more traditional Izzet Dragons/Control decks. Put simply, Fable of the Mirror Breaker is going to be all over the Standard tables all weekend, and the players who both utilize it best and have a good plan against it are going to do the best.

Why is it the best card in the format?

Think of it this way - you spend 3 mana up front, and you get essentially three excellent spells at once. Imagine you're spending 1 mana for each and break it down. While the Goblin token isn't as good as Magda, Brazen Outlaw straight up, it's certainly close, and getting it for 1 mana is excellent. The second chapter is effectively Brainstorm; Why Brainstorm and not Faithless Looting? Because Faithless Looting puts you down a card because you need to cast it; You've already spent the card by the time you hit chapter two of Fable so you just get to draw two new cards and get rid of your two worst cards. And lastly you get another 2/2 for 1 mana, which is extremely high value if it lives, but even if it eats a removal spell you're way up on the exchange.

Fable of the Mirror Breaker is the best card in Standard and the results will show it.

One of the odd factors to this event is that, despite Standard being an almost entirely new format with two unexplored sets and much to discover, Historic has changed very little over the last year. It is a very powerful format, so it's harder for new Standard sets to make an impact, but there is one card from Streets of New Capenna that slots perfectly into the de facto best deck in the format, Izzet Phoenix.

Ledger Shredder has been a breakout card, seeing play everywhere from Vintage to Historic, and it's a card that tends to get better the more powerful a format is because of how well it plays with many cheap spells (on both sides of the table).

I would be very surprised to see many Izzet Phoenix lists that are not playing Ledger Shredder.

When Streets of New Capenna was first released, all of the talk was centered around the new three-mana planeswalker, Ob Nixilis, the Adversary.

It's two three-mana planeswalkers for 3 mana!

It's the new Oko, Thief of Crowns!

It needs to be banned!

There's just one problem - Ob Nixilis, The Adversary just isn't that good of a card.

Yes, if you are ahead on board or playing against a deck that doesn't pressure the board much, Ob Nixilis can be a huge pain for your opponent to deal with. But the reality is, there just aren't many decks like that in Modern day Magic, especially in Standard. Most things play to the board these days and tempo is extremely important.

That being said, sacrificing your 2-drop to put a few fragile planeswalkers in play that don't defend themselves well and only deal some optional chip shot damage to your opponent is not a very good plan in this Standard format. There isn't even a true control deck in the format for Ob to punish, meaning you'll often just be trying to keep Ob alive against your many midrange and aggressive opponents and you're not going to have a good time.

Ob Nixilis isn't necessarily a bad card per say, but it's a card made for different metagames that also asks a lot of you in the deck-building phase of things. People will play Ob Nixilis at this Set Championship, but it will be in small numbers or maybe as a sideboard option, not as a primary piece.

Prediction Five: Two Members of My Testing Team Are Going To Make Top 8

For my last predictions article I was able to take this one into my own hands, making the Top 8 of the event after working with the "House of Mengucci," an open testing team put together by Andrea Mengucci.

However, for this event I am extremely thankful that I was offered a spot to work with Team CFB. Working with some of the best names to every play Magic has been incredibly humbling, as I'm just a dude who makes plays Magic on the internet while making fart noises with his soundboard at this point.

I only predicted one Top 8 last time because there was a fair amount of up and comers and newer players on the House of Mengucci team (and also making Top 8 of a major event is not an easy task), but with a dozen+ hall of famers and Pro Tour Champions in tow, I had to up the ante:

It's quite the murderer's row, and I am very thankful and fortunate to have been able to be part of the process. Hopefully it all goes well!

This is a very big event for me, as a big finish would put me in the running for both a spot in the World Championships this year, as well as when the paper Pro Tours return as well, but frankly it just feels like I'm playing with the house's money.

I'm extremely grateful that I'm at a wonderful place in both my life and with Magic, and while I've put some serious work in for this event and am going to give it my all, I know that whether I go 0-8 or 15-0 that nothing can change how lucky I am to live the life that I live. 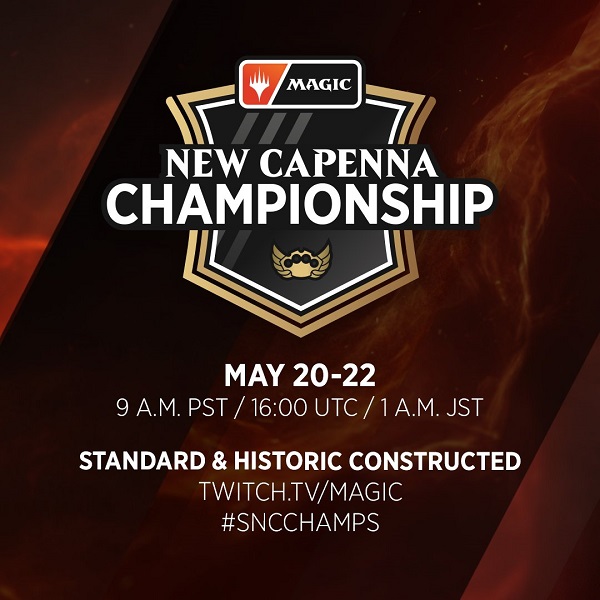 The event goes live Noon EST, 9am PST on www.twitch.tv/Magic - about an hour after this article goes live. While I can't stream my side of things, you can watch coverage on the official channel and hopefully I'll be doing well enough to be featured. I may do some content after the fact however.

Make sure to tune in!