While it feels like Ikoria: Lair of Behemoths just came out, it's actually been two months! While the world may feel upside down, there are three constants in life: death, taxes, and new Magic product releases.

Core Set 2021 is of course a core set and therefore a little different than most normal set releases. There are a high number of reprints, where a good amount of the overall power level of the set resides. As such the new cards are a little less interesting than usual, but there's quite a bit going on here to hopefully shake up Standard and more.

Let's get right to it. Village Rites is this set's Arcum's Astrolabe.

Village Rites looks absurdly simple. It's nothing we haven't seen before, as Alter's Reap has been around for a while, as well as the OG Skulltap. However, we'd seen Arcum's Astrolabe before too; Prophetic Prism is the two mana version of Arcum's Astrolabe and saw fringe play. However a lot happens when you shave a mana off of a reasonable effect, especially when the cost halves all the way down to one mana.

Like Arcum's Astrolabe, Village Rites is more than the sum of its parts. Played straight up, Village Rites feels just fine. It's effectively just a two for two; you spend your creature and this card, and get to draw two random cards. However once you start putting synergy into the mix, things start to get pretty crazy. What if I'm sacrificing a token off of Dreadhorde Invasion or Forbidden Friendship, or even better off Chandra, Acolyte of Flame? How about something I want to die anyway like Hunted Witness? Or let's get filthy and sacrifice our opponent's creature off of Claim the Firstborn!

There's a ton of value here for one mana, and that's not even just counting playing it in response to you your opponent's removal spell - Bonus points if it's an adventure creature like Bonecrusher Giant and you fizzle the adventure. Village Rites, like Arcum's Astrolabe, looks unassuming, but we've never seen this effect this cheap or efficient.

Don't sleep on it.

See the Truth is a card that's too clever for its own good.

Yes, you can flash this back with Snapcaster Mage. Sure drawing three cards for two mana is nice. But the reality is that you never want to cast this card for its front side. Anticipate is already a weak card, but making it a sorcery is very damning. We've gotta go through some serious hoops then to draw the extra cards off it, meaning we probably need to get this into the graveyard another way. That means we need to get it there, have a way to cast it from there, and then be able to make use of the three cards in a positive way. This reminds me of As Foretold and Ancestral Vision in Modern. Yeah, you can use the two together to draw three cards, but why are you putting all this effort into a "combo" that only draws three cards?

If there's some deck that can check all the boxes on this card by getting it into the graveyard for free and then reliably casting it, or casting it consistently through some other means, sure, See the Truth could see play. But make no mistake, this is a very fringe card at best.

The planeswalkers in Core Set 2021 are all of a much more moderate power level than we are used to in the last two years, and this is a good thing. The best of the bunch is Chandra, Heart of Fire.

While it would be a bit more interesting if Chandra as a character could do more than deal damage and exile-cast cards, Chandra, Heart of Fire is a beefy planeswalker than is capable of doing a lot of really good things. Starting at effectively six loyalty with two +1 abilities is awesome, and what's better is that Chandra can both effect the board and draw large amounts of cards as needed.

Chandra's first ability means she won't be a great fit in pure control decks that have a lot of card draw, but rather good as a top end for aggressively slanted decks and midrange decks. Three cards is a lot and being able to play lands is great. Shock is also a fantastic +1 ability, able to kill creatures as needed but also kill planeswalkers as well as go to the face in the absence of other targets. Her ultimate isn't the most exciting, but should be able to win you the game if needed.

Chandra isn't raw power incarnate like Nissa, Who Shakes the World or Teferi, Time Raveler, but she is a very solid planeswalker on the level of something like Ob Nixilis. If this is the new normal for planeswalkers I am happy.

Soul Sear is probably the closest we will get to Hero's Downfall in Red and that's a good place to be. Five damage is a lot more than the two to four damage most Red spells usually deal, letting Soul Sear take down cards that would normally be problematic. Of course, the problem that cards like Lava Coil usually have is that they are dead against control decks, but Soul Sears ability to take out most planeswalkers as well is a very welcome addition.

I'd have preferred the "loses indestructible" clause to be an "exile on death" clause, but there's no doubt that Soul Sear is an awesome card. This is more for the midrange and control decks than the aggro decks, but even those will likely want some number of these in the sideboard to deal with things like Baneslayer Angel.

I really appreciate the intent on Mangara, the Diplomat. White has been the weakest overall color in Magic historically, and much of that is tied to its inability to generate traditional card advantage. Blue draws cards, Black draws cards for life, Red gets to exile-cast cards (with effects like Chandra and Light up the Stage), and Green gets to draw a bunch of cards somehow too, but White gets nothing. An attempt to give White card draw is a good one.

The problem is, outside of Commander, what Constructed deck wants this card? It's a great sideboard card against swarmy aggro decks, but as a low powered, four mana creature Mangara doesn't really slot into any realistic archetype. You also give your opponent control over the triggers, as they can choose not to play extra spells or attack if they don't want to.

Managara is a phenomenal sideboard card, but doesn't really get there in any other way in Constructed. Kudos to Wizards of the Coast for working on White drawing cards though!

The Unmoored Ego/Lost Legacy style of card is often vastly overrated by your average Magic player, but can be an important tool in older formats against very linear combo decks.

Necromentia isn't anything new in this respect, but it's important to note that it is probably the best version of this effect ever printed. Combo decks would much rather have an extra card in hand than a random 2/2, making this more desirable than the other available options.

A slight upgrade, but something to be aware of for sure.

Hate - Terror of the Peaks

Terror of the Peaks is a flashy mythic rare with a lot of words on it. It's a big flyer, punishes your opponent for killing it, and makes all your subsequent creatures very powerful. Despite all that, it is very unlikely to see any Constructed play.

When you spend five mana in your main phase in a Constructed format, you've gotta do something. A card like Glorybringer is amazing because it can do two things - kill a creature and attack a player or planeswalker. As such, Glorybringer was a staple in Standard and still sees play in Pioneer and Modern. Terror of the Peaks enters the game and just... sits there, hoping you will get to untap. This is already a huge Red flag, but even more damning is that it is entering a format where Teferi, Time Raveler and Elspeth Conquers Death are two of the best cards in the format. Both cards make Terror of the Peaks look laughable, but even a simple removal spell that costs three extra life will do the trick as well.

Did you overlook Sporeweb Weaver on your first pass through the full card list? It sure looks innocent, but Sporeweb Weaver has the potential to be one of the most played cards in the format, albeit in sideboards, if any sort of aggressive deck gets popular.

Similar to Hornet's Nest before it, can you imagine a Mono-Red Aggro deck ever beating this card? It has a big enough butt to survive most burn and blocks, gains life, makes more blockers, all for a very easy to cast three mana. It's not the most nuanced card of all time (although it is cute with Marauding Raptors), but if you're looking for a slam dunk anti-Red aggro sideboard card, Sporeweb Weaver is the card for the job.

Unless you're discarding a card for value, a three mana 3/4 with a drawback that doesn't really do anything is not a maindeckable card in Standard. If your opponent does have planeswalkers this certainly gains in value, but most decks playing Planeswalkers either are playing only a few that are central to their strategy or have removal spells, or worse both, meaning that Sparkhunter Masticore isn't that impressive and is likely going to get you two for oned.

Like a number of cards in this set, the idea and goals are good, but the execution is off the mark.

I've heard Garruk, Unleashed called the worst of the new Core Set 2021 planeswalkers and that is just ridiculous. There's no doubt that Garruk is narrower in scope than your average planeswalker. You're going to want to have a combat-oriented creature in play when you cast him and be interested in attacking to make his +1 relevant, but in those decks he seems like an awesome way to push damage, as well as diversify your threats to not get crushed by cards like Shatter the Sky.

Garruk actually reminds me a lot of the original Elspeth, Knight Errant. While she has been supplanted in Eternal formats in recent years by Gideon, Ally of Zendikar, Elspeth was a phenomenal aggressive planeswalker in her day. Her ability to push damage was awesome, as well as her ability to make more creatures when you had none. Trample is definitely a little worse than flying, but being able to make an actual 3/3 threat is more appealing than a 1/1, even if the ability is a minus and not a plus.

Again, Garruk is not Nissa, Who Shakes the World, but is a fairly balanced and solid planeswalker that is deceptively good at what he does.

I'm not going to lie, the overall power level of Core Set 2021 feels lower than what we've been accustomed to over the last two years. However, with a rash of bannings and disastrous Standard formats, that may just be a good thing. I definitely would not mind a Teferi, Time Raveler and Wilderness Reclamation ban to finish off this Standard format, but some of the Core Set 2021 cards may just have to wait until fall rotation to really shine. 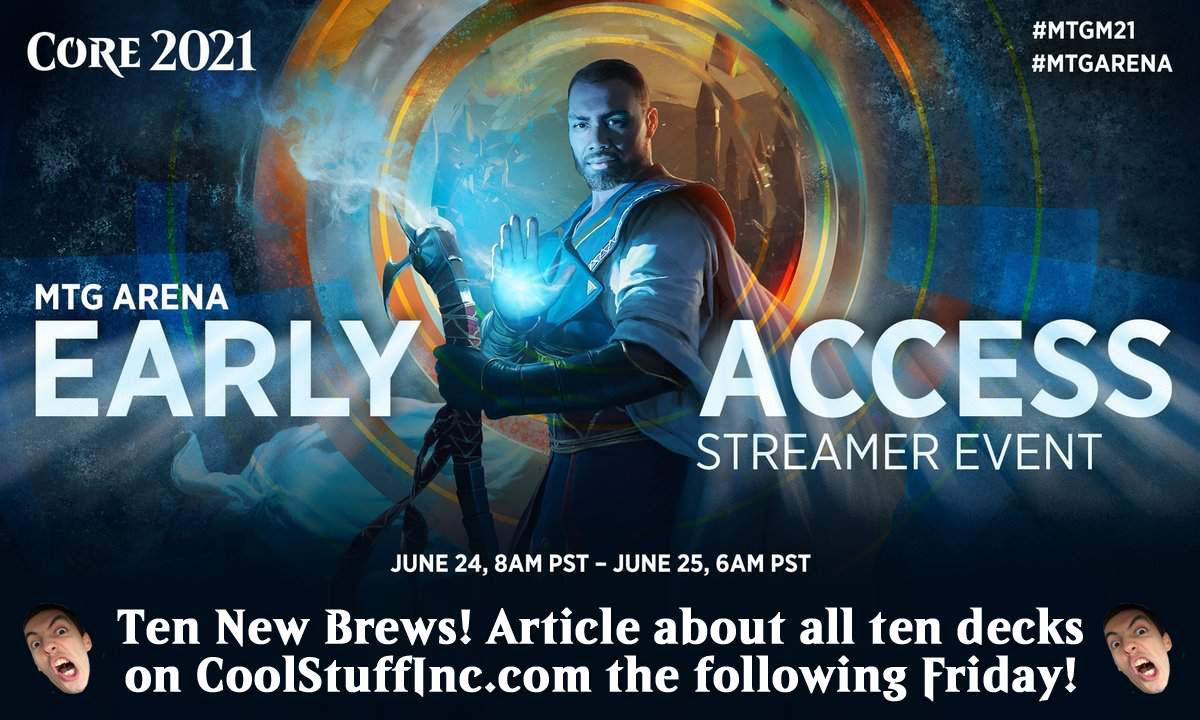 Regardless, I'm still stoked to brew with them and will be doing my usual ten new brews next week on the Early Access Streamer Event! I'll be building ten new decks as I always do, playing them on stream, and then writing all about each decklist right here on CoolStuffInc.com next week. It's probably my favorite piece of content I do so keep any eye out for it!