While Core Set 2021 has made some slight shifts to the format, Standard has mostly settled so far on three main archetypes.

Temur Reclamation, Jund Sacrifice, and Bant Ramp currently rule the roost. There are variations on each theme, but there's no doubt that each strategy is a core component of Standard. The SCG Tour Online Championship Qualifier last weekend was the first big Standard event with Core Set 2021, which saw all three of these archetypes on major display in the top 16: 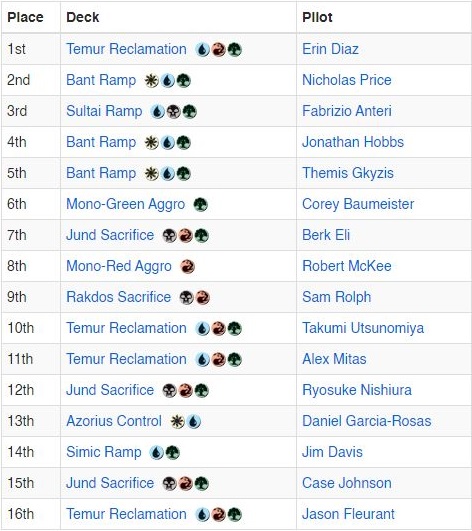 Yet, I'm here to tell you not to play one of the big three.

Simic Ramp was a fairly obvious deck with the printing of Ugin, the Spirit Dragon back into Standard, but Ugin's main hurdle is that it does very little against the de facto "best" deck in Standard in Temur Reclamation. Aside from that weakness, Ugin ranges from "amazing" to "unbeatable" against the other decks in the format.

So, can we leverage the raw power of Ugin and Simic Ramp while also beating Temur Reclamation?

My record with Simic Ramp in the last three events I've played is 4-0 in a SCG Tour Challenge last week, 6-2 in the big weekend SCG Tour Championship Qualifier for 14th place, $300, and a virtual tie for top 8, and 4-0 in another SCG Tour Challenge yesterday with this modified list.

The beauty of Simic Tempo Ramp is that it's much more than just a ramp deck. We get to play great interactive spells like Aether Gust and Mystical Dispute, as well as sideboard into a bunch of others as well. Shark Typhoon isn't the most amazing maindeck card ever, but slots perfectly into our sideboard strategy while giving us play against counterspells. The real reason this all works though is Nissa, Who Shakes the World.

Nissa is an amazing ramp tool for the deck, helping to power out Ugin and huge Hydroid Krasis, but is also a phenomenal threat in her own right that allows you to leave up mana to interact as you attack. This is a major reason for Ketria Triome in the deck, giving you the ability to tap out for Nissa, untap a Breeding Pool or Triome, and still have mana available for Aether Gust and Negate. Our Ugin plan is great against the majority of the format, but against Temur Reclamation or decks that overload on countermagic we get to transform into more of a tempo deck and lean on Nissa and counterspells to take the day.

What follows will be a sideboard and matchup guide for the big matchups in the format.

I am showcasing Takumi Utsunomiya's 10th place Temur Reclamation deck over Erin Diaz's 1st place version because it is a more stock list, and therefore more likely what you would play against if you played against a random Temur Reclamation player.

Temur Reclamation is the reason our deck is built like it is.

After sideboard we stop being a ramp deck and become a sort of tempo-flash hybrid deck. Our goal is to get out ahead in some way, stick a threat, and be able to defend it with countermagic until the game ends. Gone are big sorcery speed plays like Ugin, and in their place are nimble threats like Nightpack Ambusher. We can still go big on Hydroid Krasis and Shark Typhoon, but it's not our primary plan.

Your plays should be made with early game tempo in mind at all times. Mystical Dispute should usually be used on an early Growth Spiral, as can Aether Gust. We no longer have an 8 mana "you win" card in our deck, so it's important for the first few turns of the game to go well for us.

Please remember that this is a sideboard guide, not rules. You will need to be dynamic as there is a large amount of variation among Temur Reclamation sideboards and maindecks. Some lists will have multiple maindeck threats like Jolrael, Mwonvuli Recluse or Nightpack Ambusher, while others will have them in the sideboard or not at all. This can affect the number of Aether Gust and Mystical Dispute you want to have in your deck.

Play tight, get ahead, and ride a good threat to victory!

While Ugin, the Spirit Dragon is a drag against Temur Reclamation, it is lights out against Jund or Rakdos Sacrifice.

Because you're building toward such a powerful and difficult to deal with end game, your goal is to survive. A fast Mayhem Devil or Korvold, Fae-Cursed King is their best way to deal with you, but an early Priest of Forgotten Gods can also be annoying. If they are heavy on Priest you can consider bringing in Arboreal Grazer as sacrifice fodder to help you get going.

A big point of contention is Claim the Firstborn, which has very few targets against us but the ones it has are very good. I don't know how many copies Jund typically has after sideboarding but it's something to keep track of. Going off with Bolas's Citadel is another way they can kill you before you can Ugin, which makes leaving up Wilt rather than cashing it in early something to keep an eye on.

The more slow, grindy cards they have like Solemn Simulacrum the better it gets for you, which means that Rakdos Sacrifice and their Dreadhorde Butchers are probably more dangerous than normal Jund Sacrifice.

Make sure your hand has traction, get to Ugin, and take it down.

Bant Ramp is essentially the control deck of the format, with a strategy that is similar to ours but leans more heavily on the Azorius Control cards like Teferi, Time Raveler, Shatter the Sky, and Elspeth Conquers Death. The good news is that Teferi and Shatter the Sky aren't great against us, while our much more focused plan and bigger top end goes over the top of what they are doing.

Sideboarding against Bant Ramp is complicated because like Temur Reclamation there is a huge variety in cards they can have both in their maindeck and/or sideboard. Nicholas was playing three copies of Jolrael, Mwonvuli Recluse in his maindeck which makes the deck more proactive, but many versions play zero copies. As such, you are going to need to tailor your sideboarding based on what you see. The more Jolrael you see, the more you want Aether Gust, and so on.

A major factor in how you sideboard will be how many copies of Dovin's Veto or other hard counterspells they have. The more copies they have, the less you will want to rely on Ugin and the more nimble you will need to be with your own counterspells and cards like Shark Typhoon. The less copies they have, the more you can just slam as Ugin will be able to mop up basically any board absent of Nissa lands. However, be aware of Elspeth Conquers Death! Elspeth Conquers Death is a powerful answer to Ugin, so you want to ensure that you either draw it out with other threats or that when you cast Ugin you get devastating immediate value.

Teferi can be a little annoying for your sideboarded counterspells, but with more ramp and a better end game you should have a good matchup here against Bant Ramp.

There's nothing subtle about the Mono-Green Aggro matchup.

Mono-Green Aggro has little recourse against Ugin, the Spirit Dragon. It's basically just Stonecoil Serpent or a hopefully lethal Questing Beast follow up. They can't counter Ugin; they can't stop Ugin; they just need to kill you before you can cast Ugin or the turn you cast Ugin.

Aether Gust is of course huge in the matchup as an effective Terminate, while Nightpack Ambusher surprisingly comes in as a very nice blocker. Nightpack Ambusher can eat many of the smaller creatures in combat or even just trade with some of the larger ones, buying you time to get your endgame set up. You need to keep an eye on even more haste out of their sideboard with Shifting Ceratops, but as long as you can survive you'll be fine.

This is not the matchup to keep a risky hand!

There are other matchups in the format like Mono-Black Aggro, Mono-Red Aggro, or PawBlade, but they aren't popular enough to warrant a full guide.

The most important thing is to figure out what the matchup and end game is going to look like and build toward that endgame. Very often this will just be Ugin, the Spirit Dragon, as Ugin is unbelievably good against random decks, but it's on you to decide if you are going to lean on Ugin or need to lean into something else.

If you like ramping, tempo, and the raw power of Ugin, the Spirit Dragon with the flexibility of something much more, Simic Tempo Ramp is probably for you. I am likely to play the deck again in the SCG Tour Online Championship Qualifier again tomorrow, but I haven't made my final choice yet.