With 40 new and powerful cards being added to the Historic format last week in Historic Anthology 6 and Explorer Anthology 1, the landscape of Historic is forever changed.

While cards like Tarmogoyf, Laelia, the Blade Reforged, and Supreme Verdict are all making their presence felt, the biggest shift in the format is not one single card but rather a whole class of cards from both releases.

An astounding 11 of the 40 cards in both anthologies are artifact lands, and when joined with Treasure Vault the total number of artifact lands in the format goes up to 12. That's a lot!

The original artifact lands from Mirrodin have been banned for the entirety of the existence of the Modern format, while also being banned in their respective Standard and Block Constructed formats.

It turns out putting the most synergistic card type onto a colored land that enters the battlefield untapped with no drawback other than being vulnerable to artifact removal was not a good idea! Even when decks were playing four maindeck Oxidize and four maindeck Shatter they weren't beating Affinity back in Standard, and while Modern has many more powerful tools like Shattering Spree or Stony Silence, the artifact lands still haven't been set free.

These new artifact lands from Modern Horizons 2 trade in that vulnerability to (most) artifact hate for the downside of entering the battlefield tapped, but gain the benefit of tapping for multiple colors. While entering the battlefield tapped feels like a huge drawback, in many ways it feels like these lands tap for two mana rather than one so you get the first mana when you play it and another mana the next turn, and that's to say nothing of the benefits of simply adding another artifact to the battlefield.

Make no mistake, these artifact lands change what is possible in Historic.

There are a ton of powerful artifact cards in the format, from proper affinity cards like Myr Enforcer, Thought Monitor, and Emry, Lurker of the Loch, to "artifact counting" cards like Nettlecyst and Michiko's Reign of Truth // Portrait of Michiko. Once you get to count all of your lands for these effects the power level starts to rocket through the roof. And the crazy part is that many of these cards were already seeing play with only Treasure Vault legal!

Which brings us to today's hero.

Karn, Scion of Urza has always been a fine planeswalker. His card draw abilities are reasonable and he is easy to cast and has a high loyalty, but aside from that he often has struggled to find a home. The key to Karn is unlocking the power of his -2 ability. 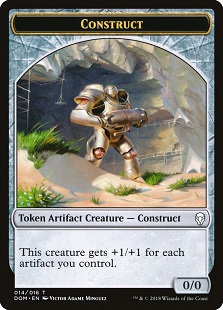 Without artifact lands, it's tough to make Karn's token a relevant threat on turn four. With a lot of help it's a 3/3, maybe a 4/4, but not exactly ahead of the curve. With artifact lands, it's hard for Karn's token not to be at least a 6/6, and is more commonly closing in on double digits. The fact that Karn gets to do it again on the following turn, while leaving behind a planeswalker that can draw cards and eventually gain more value, sees Karn, Scion of Urza as perhaps one of the most improved cards in the entire format.

Karn can be the top end for an aggressive Affinity or Ensoul Artifact deck, as well as the centerpiece for a somewhat more controlling artifact deck that leverages cards like Portable Hole and Glass Casket to interact more. But either way, Karn is the top end card that you're looking for.

Part of the beauty of Historic as a format is cards like Karn, Scion of Urza finally finding a home. However, whenever a hero rises, a villain often rises to meet him.

Like an evil and twisted variant from a cold and unforgiving alternate universe, meet Karn, the Great Creator.

Karn, the Great Creator has always been the more popular of the two 4-drop Karn's, seeing a lot of play in Modern over the years as well as being the centerpiece of Pioneer Mono-Green Devotion. However, this was mostly due to his ability to provide for a "wish board" of various answers and threats from player's sideboards.

This has been Karn's primary function over the years, but his role in Historic is now far more devious. He can still do all the artifact toolbox stuff he normally does, but perhaps more important is how brutal he is against artifact lands.

Karn, the Great Creator's passive ability is a one-sided Null Rod (good lord why are all the War of the Spark prison planeswalker passives one sided?), completely denying a player access to any activated abilities on artifacts. This of course means mana abilities, which turns your artifact lands into paperweights. But it gets worse, as his +1 ability can turn any artifact land into a 0/0 creature, killing it on the spot - even if it's indestructible.

This of course makes Karn a devastating answer to any heavy artifact deck, but all is not lost.

The good news is that Karn, the Great Creator is a planeswalker that doesn't defend himself super well, and while turning off activated abilities is very powerful it doesn't stop Nettlecyst Germs or Ensoul Artifacted 5/5s from rumbling in. As a four-mana sorcery speed play, you can also use cards like Metallic Rebuke to keep Karn off the battlefield and fight the good fight.

The landscape of Historic has changed significantly and the battle lines are still being drawn. There are a ton of powerful artifact cards to go along with these new artifact lands, but there are also many tools to fight this new menace.